They are the two oldest children of their power couple parents Kim Kardashian and Kanye West.

And it seems 6-year-old North and 4-year-old Saint West are finally getting along.

Their reality TV star mom posted adorable snaps of them together to Instagram on Tuesday, over a year after she revealed North wasn’t speaking to Saint. 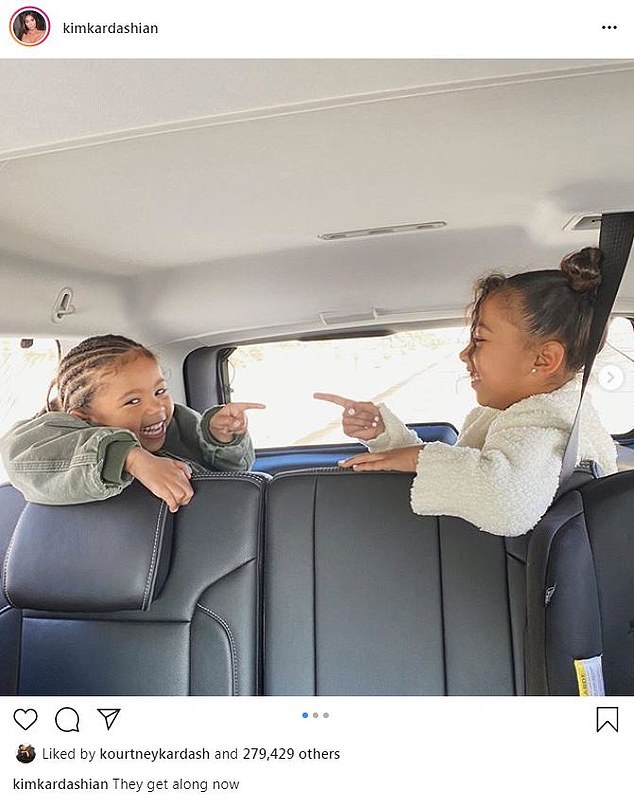 Happy together: Kim Kardashian posted adorable photos of her two oldest children, North and Saint, to Instagram on Tuesday, weeks after revealing they weren’t speaking

In the very back of a car, the two seem to be laughing and pointing at each other.

North looked adorable with her hair up in two buns and wearing a plush white jacket.

While Saint, with a big smile on his face, donned a green denim bomber jacket and had his hair done in cornrows braids.

In a second photo they look towards the camera, as North flashes a grin and Saint seems surprised. 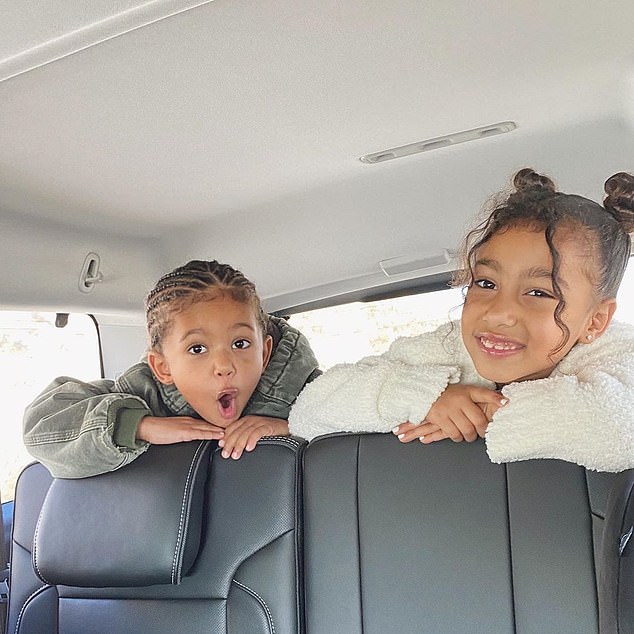 Adorbs: The two looked so cute laughing and joking with each other in the back of a car before smiling for the camera

In the caption Kim wrote ‘They get along now.’

It comes after Kim revealed on The Ellen DeGeneres Show in 2018 that while North was ‘better’ with sister Chicago, two , she still wouldn’t share or even talk to Saint.

‘She does not share with Saint, she hardly talks to Saint,’ she said.

Kim added that the day before the interview there was a moment where a change of heart appeared to be coming through.

‘There was a shocking moment yesterday. She literally had a can of popcorn and was like, “Saint, do you want some?” And I was like “What!?” That was such a big moment in my household.’ 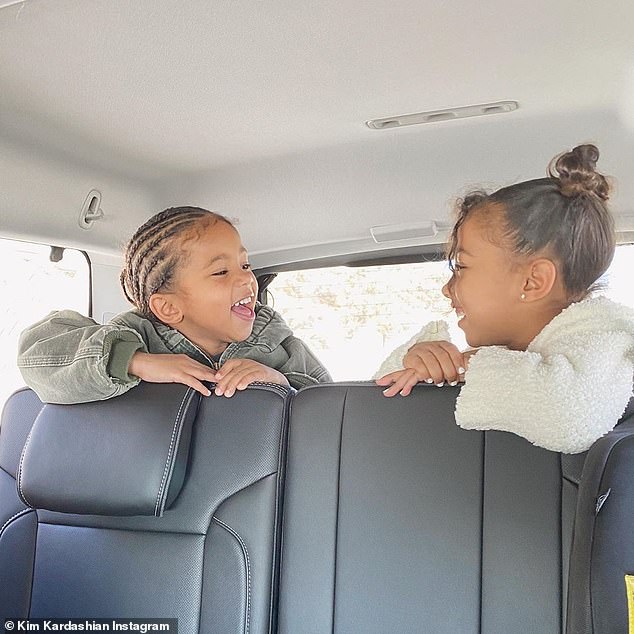 Long time coming: In the caption Kim wrote ‘They get along now.’ It comes after Kim revealed on The Ellen DeGeneres Show in 2018 that while North was ‘better’ with sister Chicago, two , she still wouldn’t share or even talk to Saint 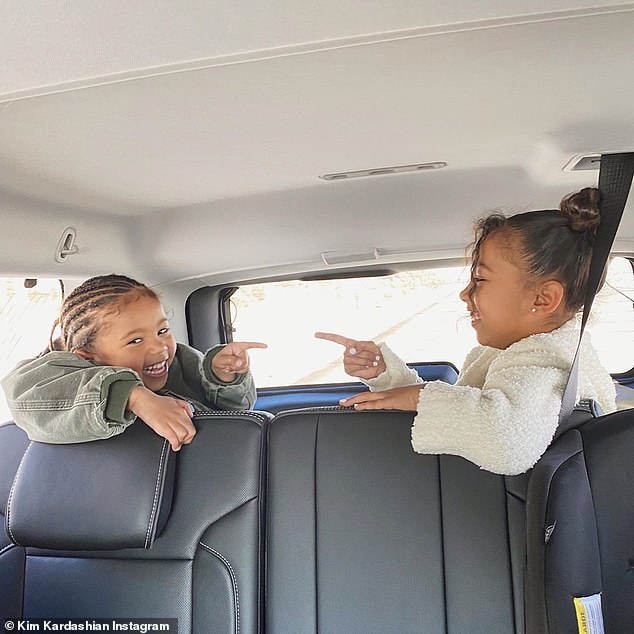 Green monster: Kim added that the friction was purely jealously

Kim added that the friction was purely jealously.

‘She needs to still get it together and warm up and like be a little bit nicer, but I think she is getting there,’ she said. 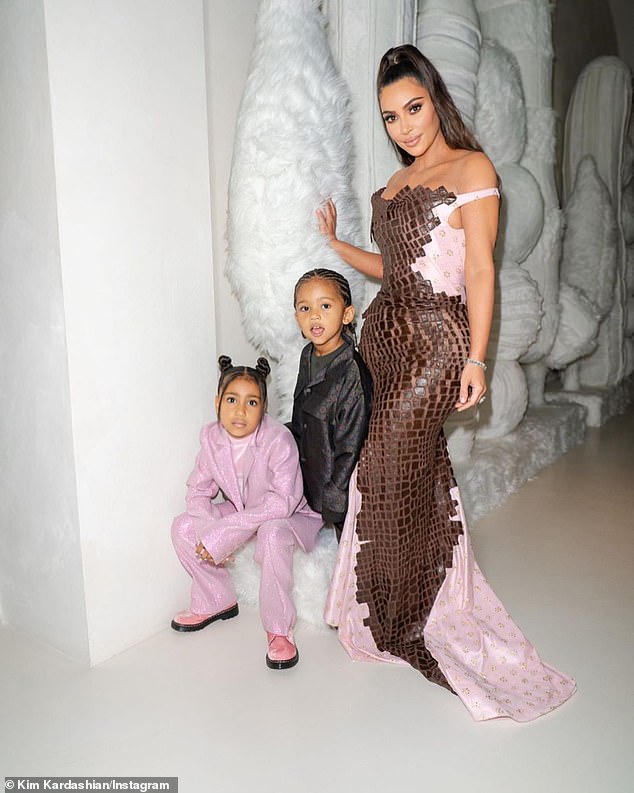 With mom: Kim posed with the two for the annual Christmas party though North didn’t seem to be too happy

And last year tensions seemed to still be high between the two youngsters.

Kim wrote ‘It was going so good….’

In a second photo Saint appeared in the photo, giving his sister a stank face while North calmly flashed a displeased side-eye. 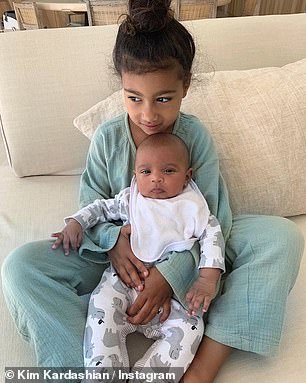 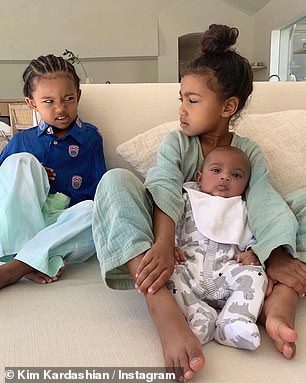 Not having it: And while all seems to be going well between North and Psalm, things between the six-year-old and brother, Saint, four, still aren’t picture perfect 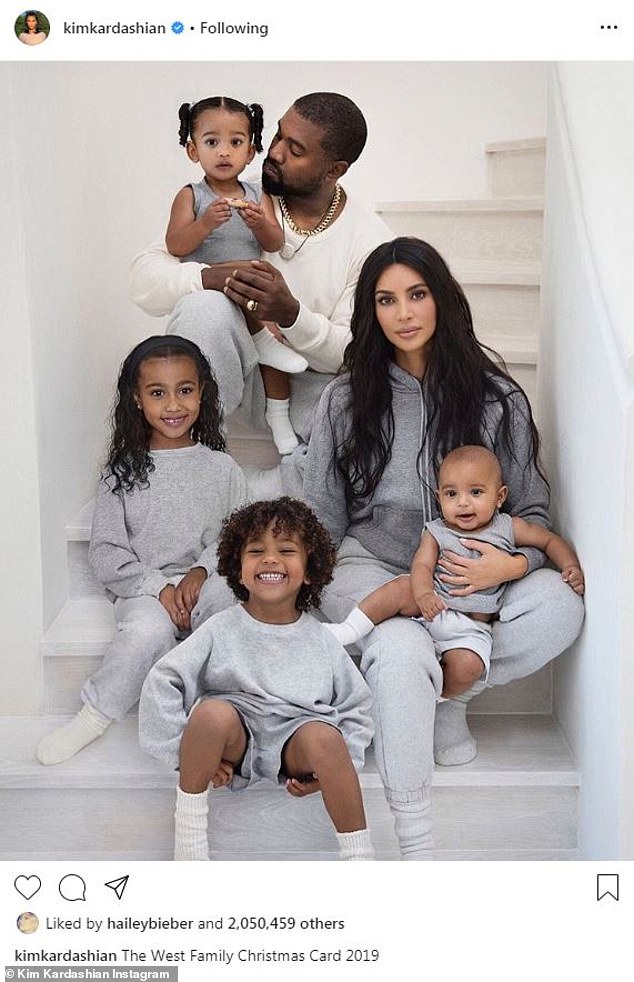 Altogether: The Kardashian-West 2019 Christmas card saw all the family members together in grey sweats on the stairs