Kim Kardashian shared a book excerpt to Twitter on Wednesday that she claimed predicted the coronavirus outbreak years earlier.

The 39-year-old Keeping Up With The Kardashians star posted a photo from the 2008 book End Of Days, written by the late Sylvia Brown, an author who claimed to be psychic.

The excerpt claimed that a ‘severe pneumonia-like illness’ would occur globally in 2020. 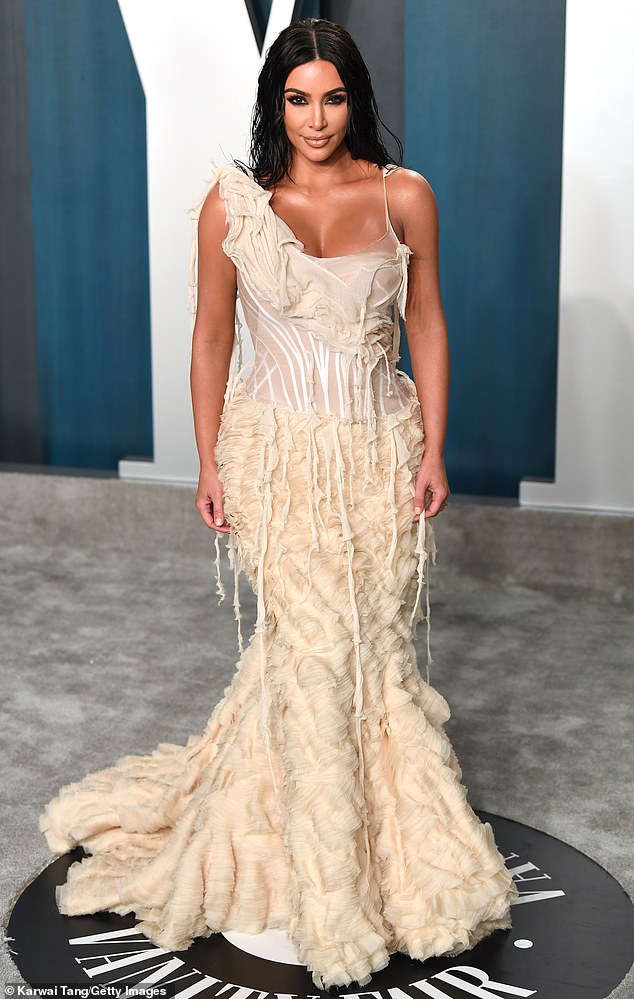 Kim shared a photo of the circled passage to Twitter and copied it to her Instagram Stories.

‘Kourtney just sent this on our group chat,’ she wrote.

Browne wrote that the illness ‘will spread throughout the globe, attacking the lungs and the bronchial tubes and resisting all known treatments.

‘Almost more baffling than the illness itself will be the fact that it will suddenly vanish as quickly as it arrived, attack again ten years later, and then disappear completely,’ she wrote. 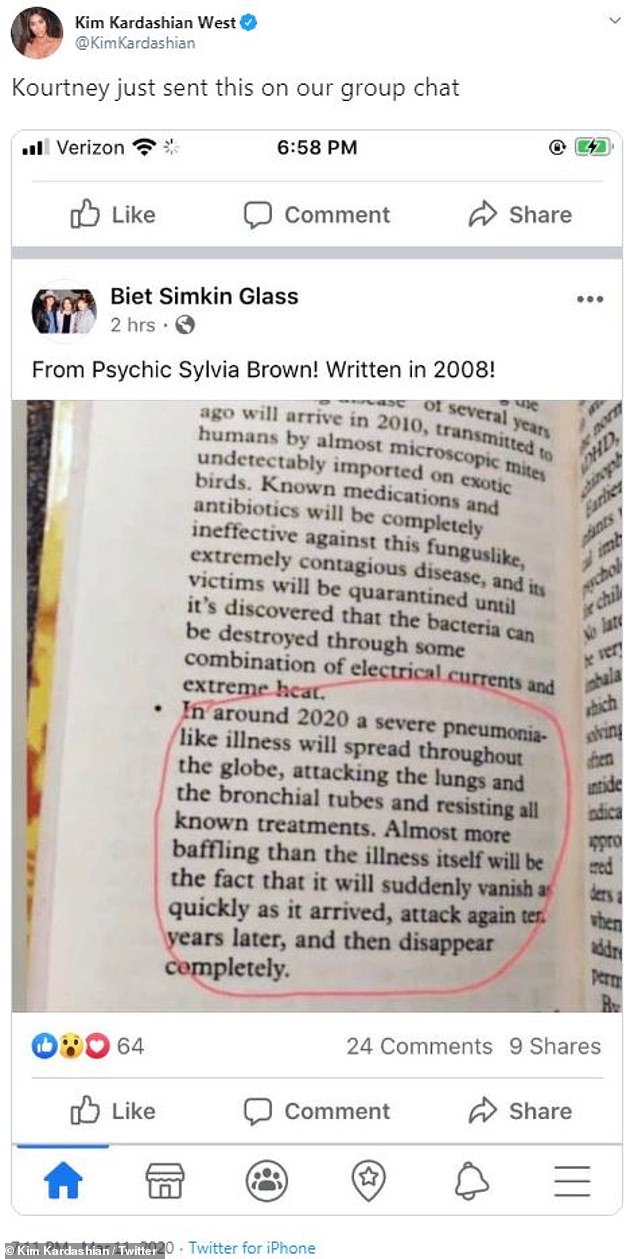 Close: Browne wrote that the illness ‘will spread throughout the globe, attacking the lungs and the bronchial tubes and resisting all known treatments’ in her 2008 book End Of Days 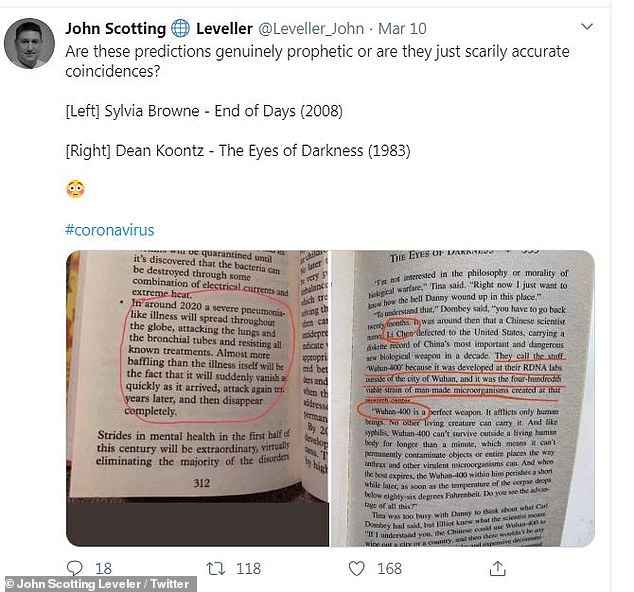 Weird coincidence: Some users connected it to a passage from Dean Koontz’s 1983 thriller The Eyes Of Darkness, which describes a ‘strain of man-made microorganism,’ called ‘Wuhan-400’

Browne wrote the book with Lindsay Harrison, and it was published five years before her 2013 death at age 77.

Fact-checking website Snopes.com points out that the SARS virus had occurred a few years before she published the book and might have inspired the passage.

Her description of a ‘pneumonia-like illness’ that attacks the ‘lungs and bronchial tubes’ seems to describe the respiratory illness fairly well.

However, most people who contract the COVID-19 disease well experience fairly mild symptoms, though people over 60 and those with compromised immune systems are at greater risk of complications or death.

The passage was quickly spread around social media, and some users connected it to an eerie passage from Dean Koontz’s 1983 thriller The Eyes Of Darkness, which describes a ‘strain of man-made microorganism,’ called ‘Wuhan-400.

The COVID-19 illness caused by the novel coronavirus was first reported in China’s Hubei province and it’s capital city Wuhan, although the virus was not man-made. 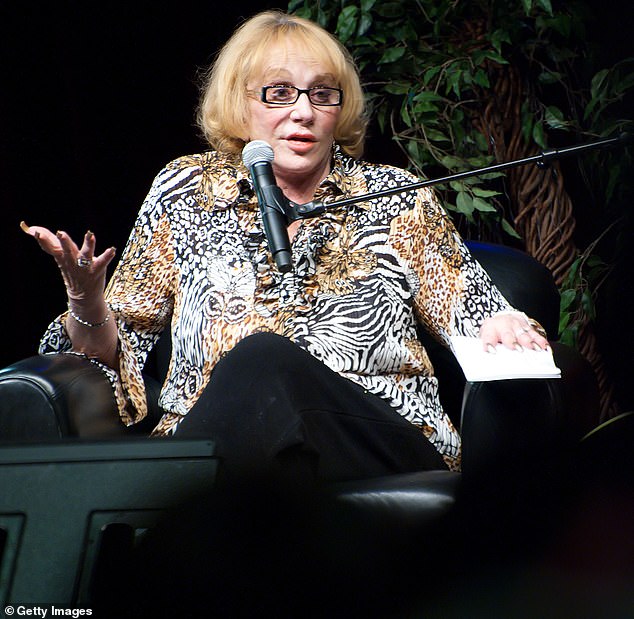 Not quite: Browne’s unnamed virus sounds far more severe than the COVID-19 illness, and her prediction that it will quickly disappear then return 10 years later is unlikely; shown in 2010 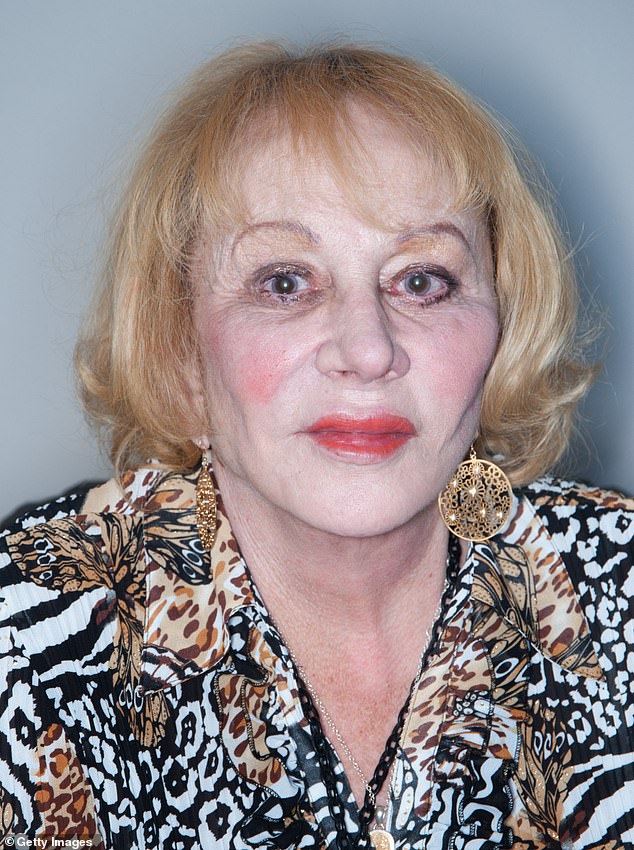 Browne was best known in her lifetime for writing over 40 books and was a frequent guest on talk shows, during which she would do psychic readings with guests or callers.

But she was nearly as infamous for her repeated false or discredited predictions.

In 2002, she claimed that the kidnapped 11-year-old Shawn Hornbeck was abducted by a Latino man with dreadlocks and dark skin, but when Hornbeck was found alive in 2007, it turned out he was kidnapped by a white man.

In 2004, Browne told the mother of Amanda Berry that her kidnapped daughter was dead, going as far as to suggest her body had been disposed of in water and that DNA from the killer might be found on her jacket.

Browne made numerous other significant errors while predicting the outcomes of abductions, and she even got the age she would die at wrong by 11 years. 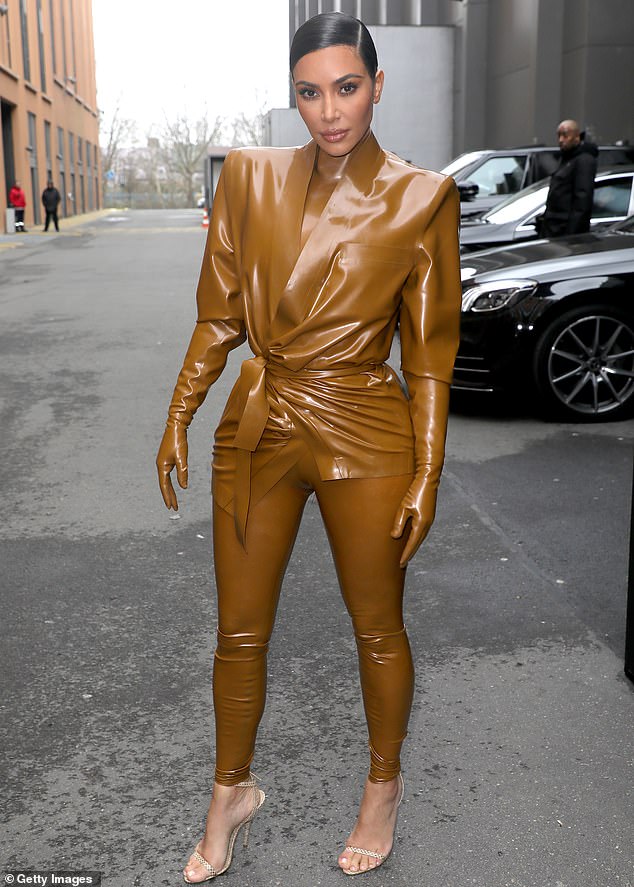 Safety first: Kim shared what she called the best way to greet people without shaking hands to her 162 million Instagram followers earlier on Wednesday while at her sister Khloé Kardashian’s house; shown March 1 in Paris 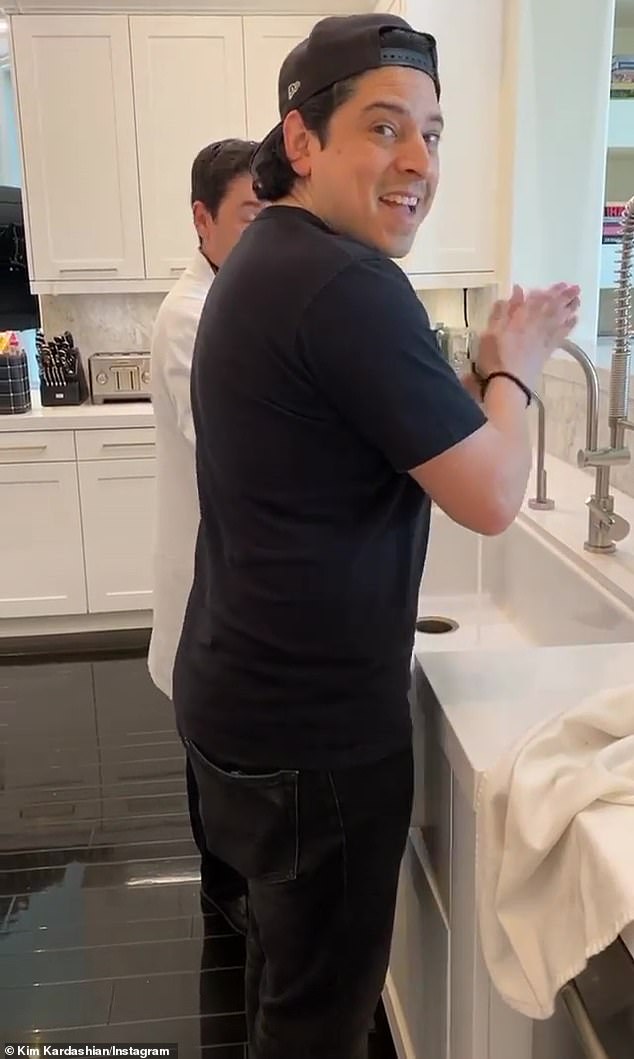 First things first: Kim and Khloé had a doctor and a friend visiting who decided to demonstrate her preferred method of greeting in order to keep down disease transmission

She filmed a friend and a visiting doctor bumping their feet against each other as a greeting, rather than shaking hands or elbow bumping.

‘So you should not do elbows, because you cough into your elbow,’ she explained. ‘So no more elbows!’ she said.

However, the World Health Organization’s Director–General Adhanom Ghebreyesus recommends staying 1 meter (3ft) away, so Kim’s method may still keep people too close to prevent the spread of coronavirus or other illnesses. 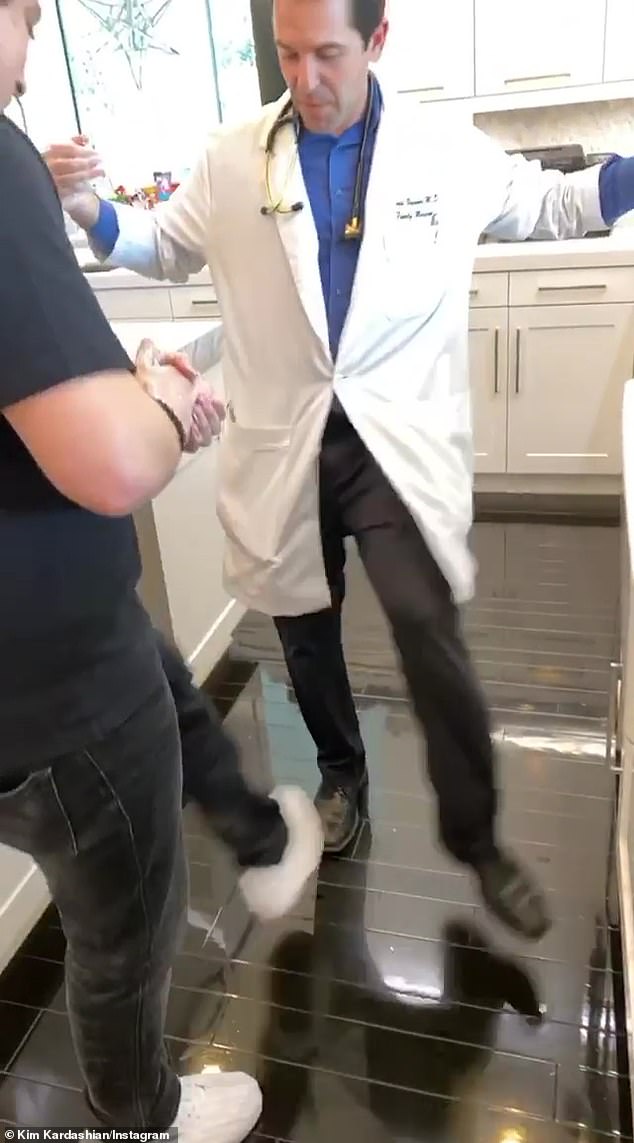 Tap dancing: They faced each other and tapped the side of the shoes together diagonally like a handshake, first one foot then the other 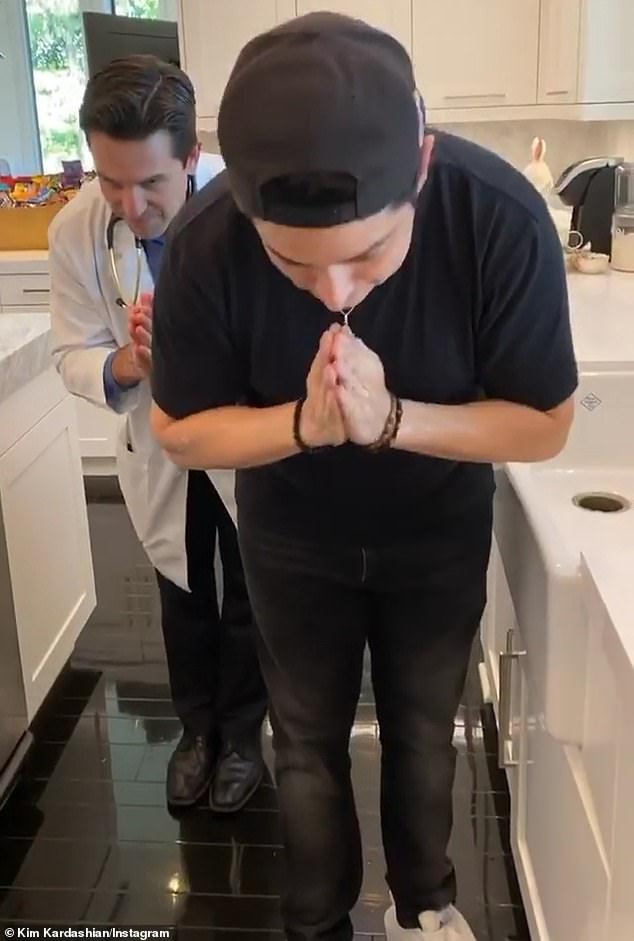 Professional opinion: The World Health Organization’s Director–General recommends staying 1 meter (3ft) away, so Kim’s method may still be too close