‘Is it made of wet towels?’ Kim Kardashian gets lampooned on Twitter for covering her Lamborghini in cozy SKIMS fabric… as it gets compared to the dog van in Dumb and Dumber

Kim Kardashian entertained and amused her fans on Friday, as she kept the promo wheels turning for her underwear brand by revealing a customized Lamborghini Urus covered in ‘cozy’ SKIMS fabric.

‘OK guys, look at my new Lambo Urus, it’s the SKIMS one you guys, this is all the cozy fabric for SKIMS,’ she said in a video, which appeared to be parked at her Hidden Hills home.

However, some fans were quick to post hilarious reactions to the car made out of the white fluffy material, with one user comparing to the ‘Dog Van’ used in the 1994 comedy Dumb and Dumber starring Jim Carrey and Jeff Daniels. 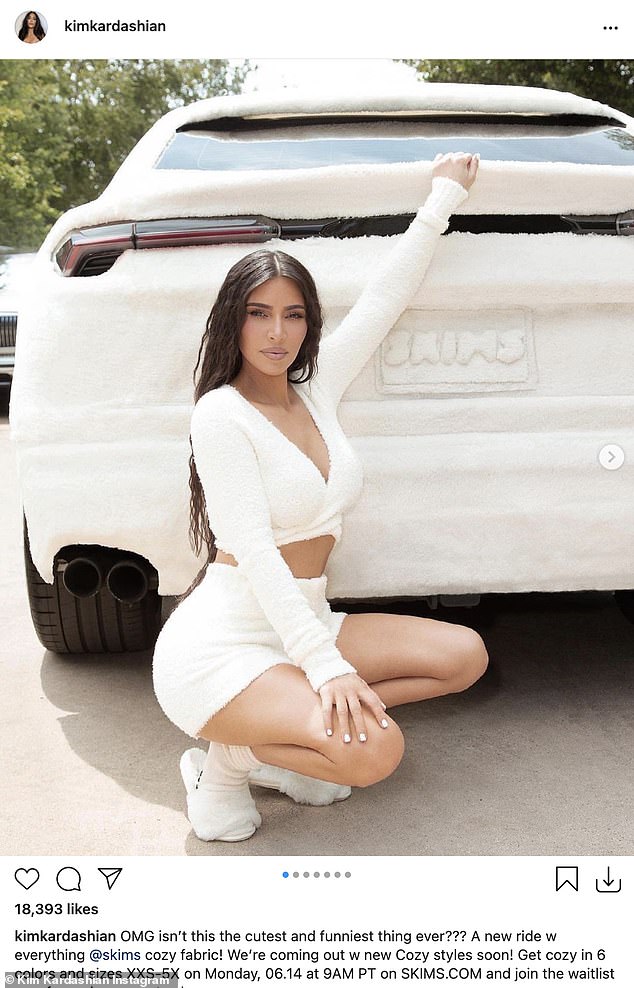 ‘Is that car made of towels?’ Kim Kardashian poses by her custom SKIMS Lamborghini on Friday, sparking a fun reaction from fans online comparing it to dog van in Dumb and Dumber

‘Harry and Lloyd did this first,’ one user wrote, with a still from the movie, while another joked: ‘It’s already been done Kim.’

Another tweet read: ‘Is that car made of towels? What do you do when it rains??? It must smell like a wet dog, man alive.’

However, other uses criticized the stunt as ‘wasteful’ with one person writing: Just so we’re clear… Some people can’t afford clothes. Yet, here you’re dressing your car? Not funny one single bit.’ 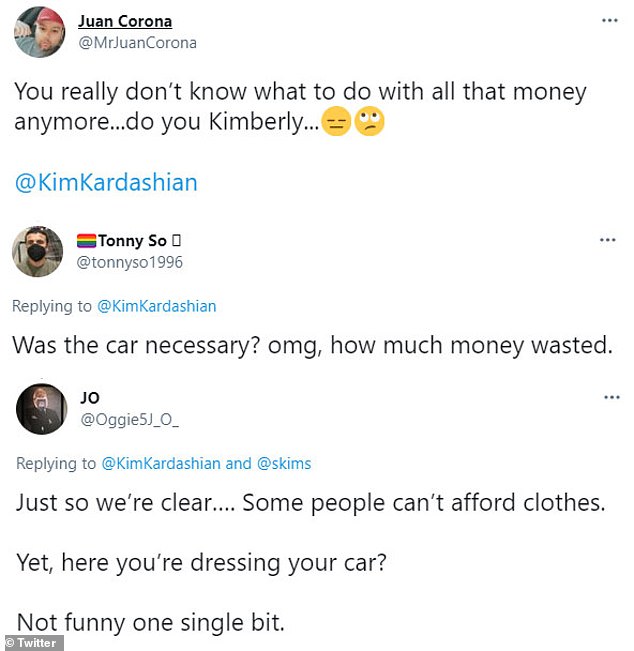 Reaction: Others criticized the stunt as wasteful

Kim explained of the car: ‘Look, I’m matching the car, how cute and comfy is this?! Is this not the cutest thing ever? Oh my God.’

The customized vehicle appeared to be parked in the drive way of Kim’s Hidden Hills mansion, with the reality star filming the fluffy interior for fans.

She also wore a matching outfit as she posed for a slew of Instagram snaps, looking typically stunning while seated in the luxury car. 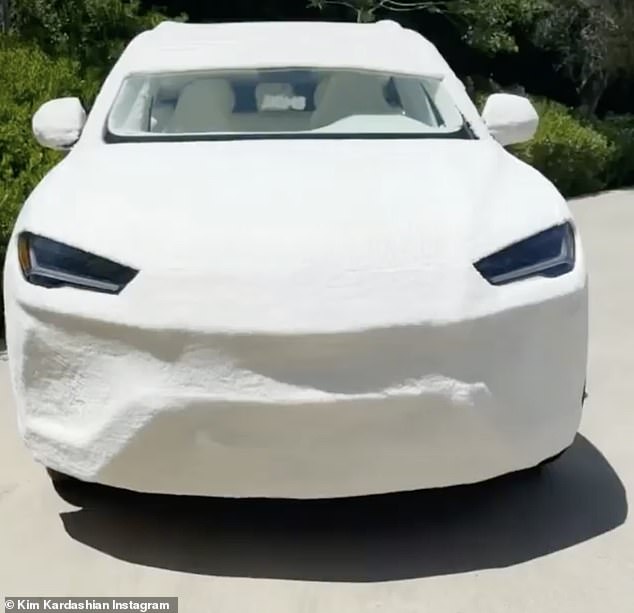 Pimp my ride: The customized vehicle appeared to be parked in the drive way of Kim’s Hidden Hills mansion, with the reality star filming the fluffy interior for fans 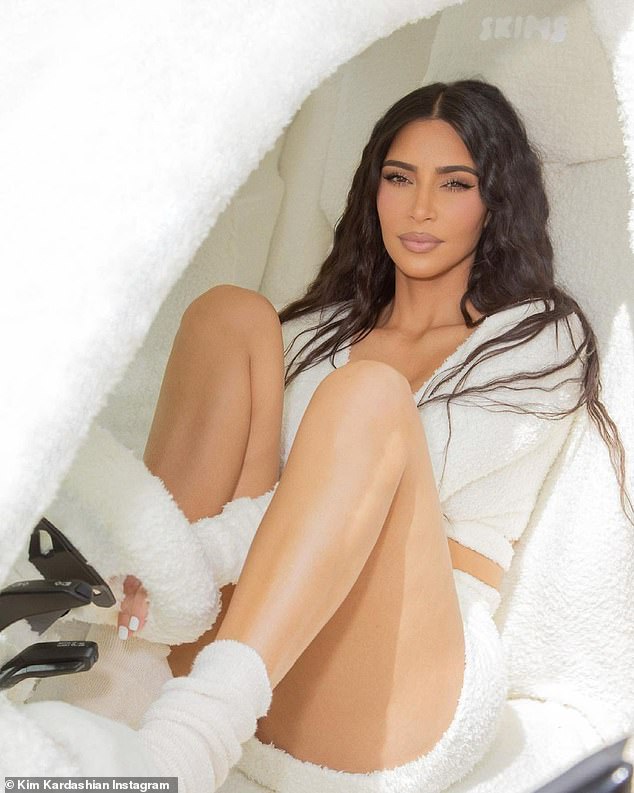 Unstoppable: Kim also kept the promo wheels turning as she posted a series of snaps and video of a SKIMS customized Lamborghini Urus 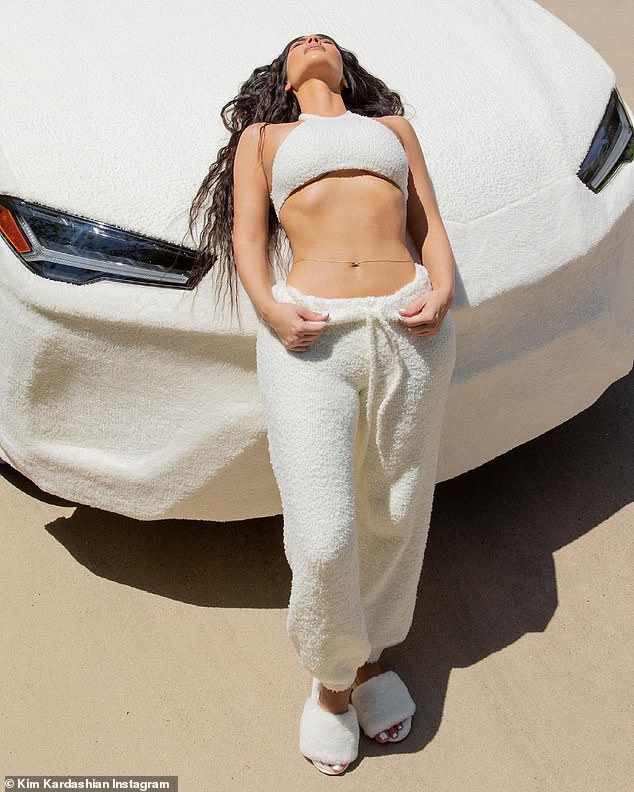 Fluffy: At one point, Kim – who is currently going throw a divorce with estranged husband Kanye West – was seen showing off her taut tummy as she laid back across the SKIMS Lambo

At one point, Kim – who is currently going throw a divorce with estranged husband Kanye West – was seen showing off her taut tummy as she laid back across the SKIMS Lambo.

She captioned the post: ‘A new ride w everything @skims cozy fabric! We’re coming out w new Cozy styles soon! Get cozy in 6 colors and sizes XXS-5X on Monday, 06.14 at 9AM PT on SKIMS.COM and join the waitlist now for early access to shop.’

SKIMS, which sells shapewear, underwear, loungewear, and pajamas, was launched by Kim in 2019. 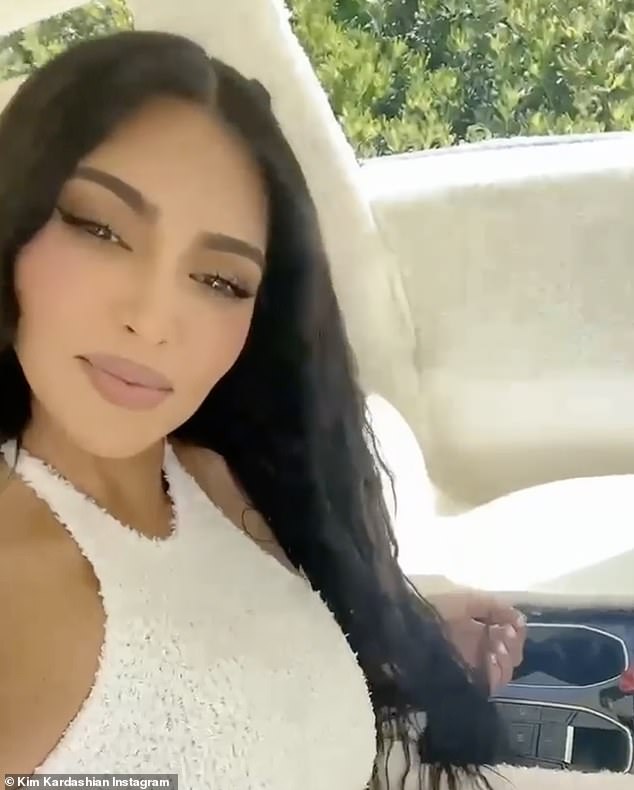 Matching: She also wore a matching outfit as she posed for a slew of Instagram snaps, looking typically stunning while seated in the luxury car 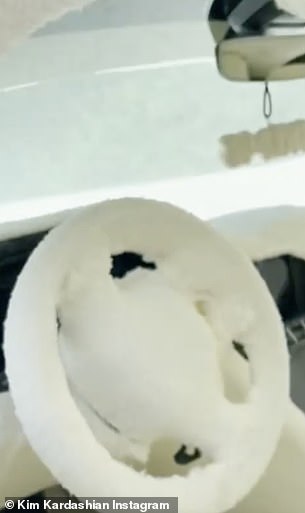 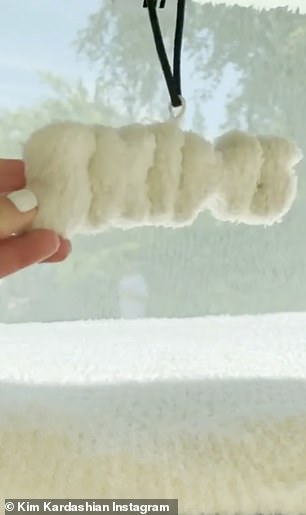 Fluffmobile: The car even had a steering wheel cover made out of SKIMS cozy material 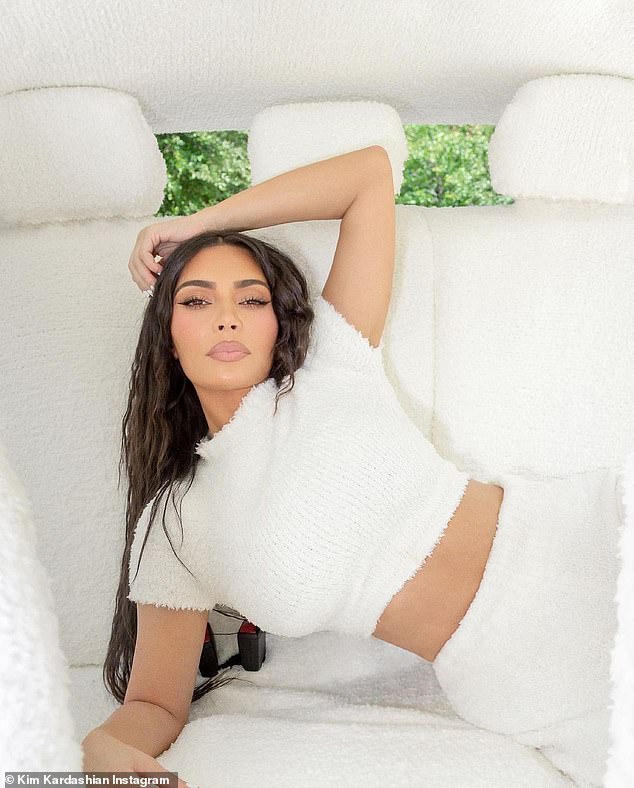 Laid back beauty: Kim looked stunning as she posed in the backseat of the customized vehicle

In an interview with Vogue, Kim says she was compelled to start the company in order to offer more shapewear options to consumers.

‘Overall, I really just wanted to give people options when getting dressed,’ she said.

‘From innovative shapewear that you can wear every day to the comfiest underwear that perfectly moulds to your body — I wanted to create a brand that could be relied on as a true solution for how people dress today.’ 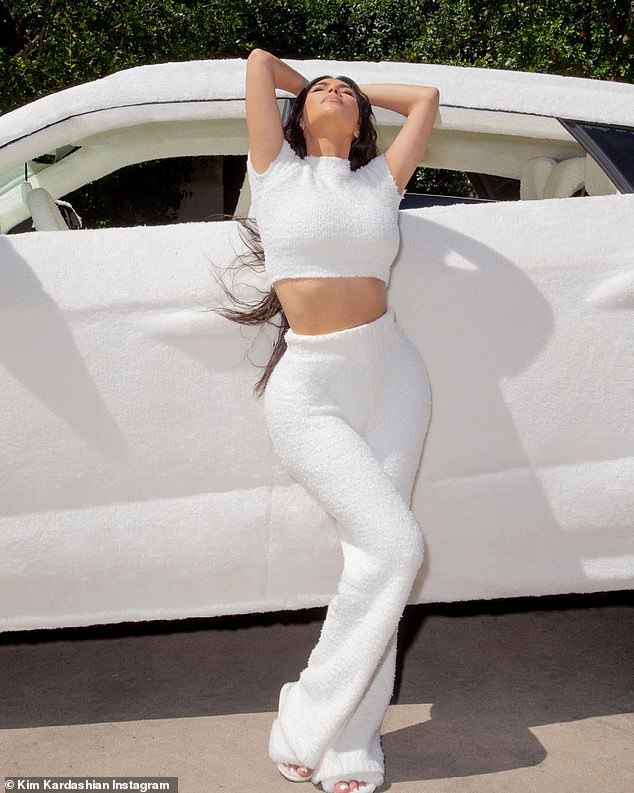 Flawless: The KUWTK star dazzled in her cozy all white ensemble 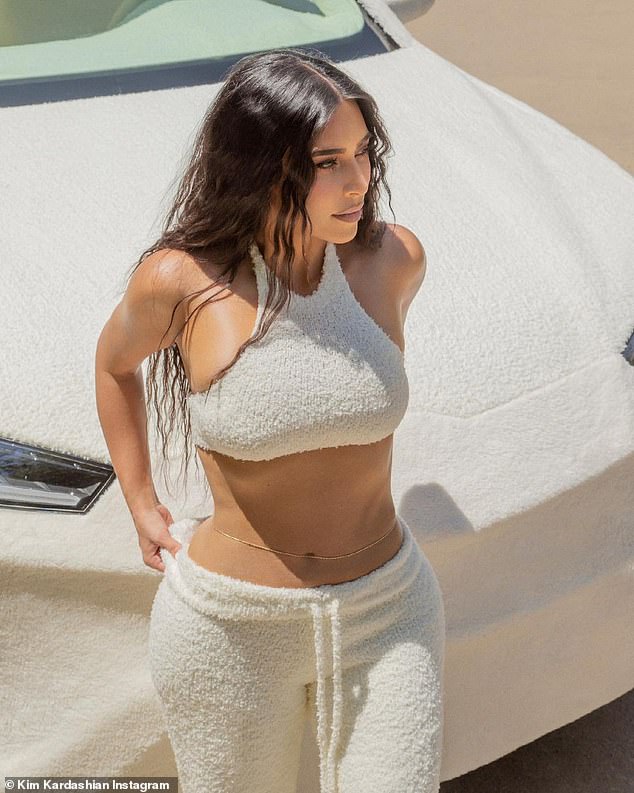 Life in the fast line: Kim is moving on with her SKIMS promo after the final episode of KUWTK aired last night on E!

‘In doing this, it was especially important that we were size-inclusive and offered a range of colors.’

It was through her own experience DIY-ing shapewear that Kim realized the business potential.

‘I used to cut up and sew different styles of shapewear together to create the silhouette I wanted because I could never find the shape I was looking for.’

‘Other brands would either flatten my curves, pinch into my skin or roll down. I would also dye pieces with tea bags to match my skin tone as there was such a limited offering of colors on the market.’