Keeping calm. Kourtney Kardashian shared a cryptic post to both Snapchat and Instagram Stories on Saturday, August 4, about controlling one’s anger in the wake of her very public feud with sister Kim Kardashian.

Capturing a shot from what appeared to be a religious book, the Keeping Up With the Kardashians star underlined one passage in particular: “Be quick to listen, slow to respond, and slow to become angry.”

She also added an “Amen” to the top of the page. 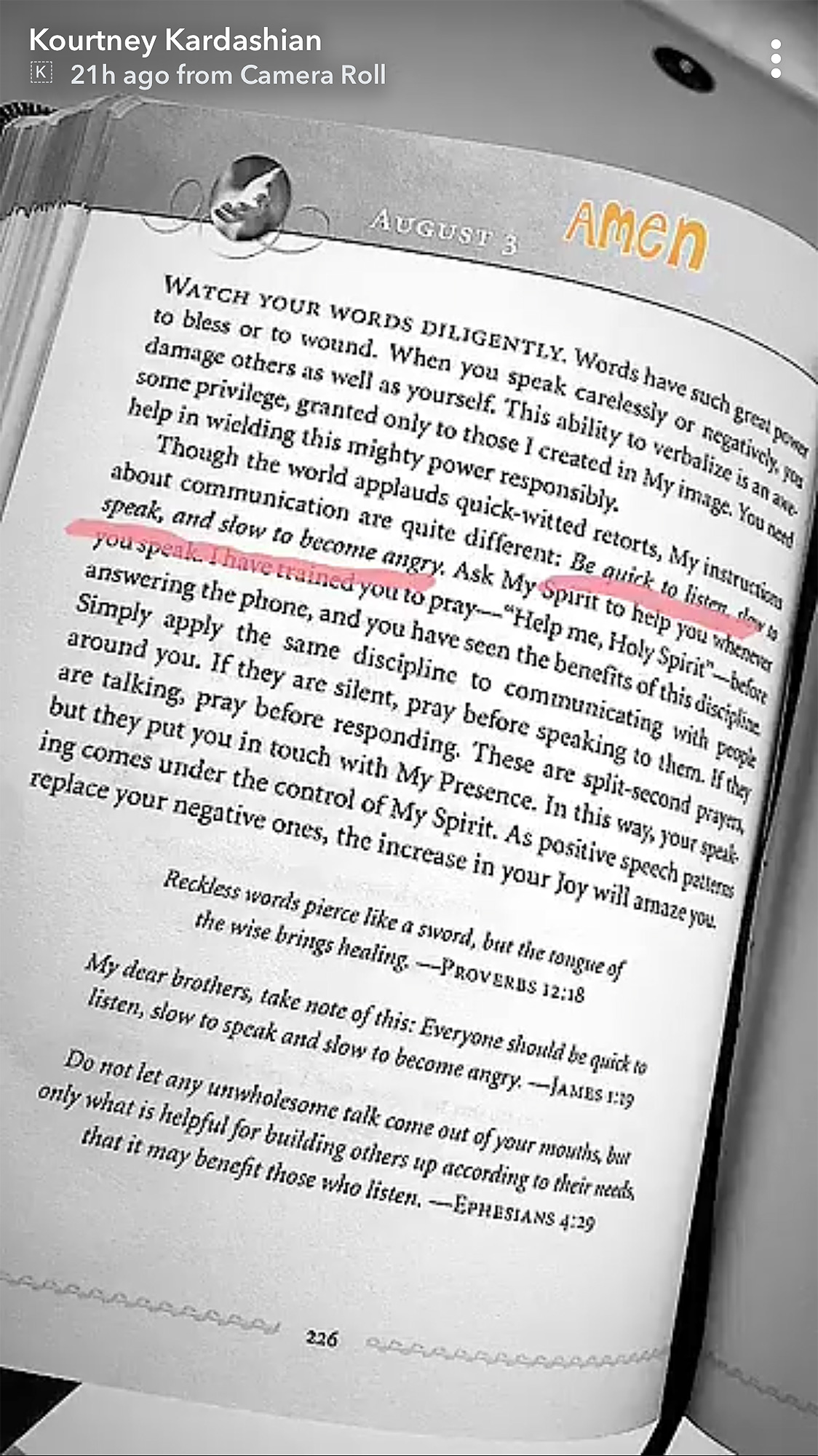 The reality vet, 39, spoke about her fractured relationship with Kim in an interview with E! on Friday, August 3, admitting there is still some underlying tension between them. “Honestly, I think it’s ongoing. I’ve been really working on myself a lot and I think through my growth, I’m better at expressing myself,” she said. “I think in the past I’ve always been great at, like, not being emotional. I think that I’m better now at expressing my feelings. … It’s a lot of communication instead of letting things go back into the way that they were. It’s definitely a process and you’ll see it throughout the season.”

The siblings’ fight, which was captured for the upcoming season 15 premiere of KUWTK, began before the holidays, with the two women arguing over a scheduling conflict Kourtney had with Kim’s plan to shoot the family’s annual holiday card.

“No one wants you in the f—king shoot so get the f—k out of here,” Kim yelled, later announcing, “I need Kourtney to not be so f—king annoying with a stick up her ass like she runs this s—t because she doesn’t. She’s the least exciting to look at.”

The callous comment reduced the former Dash owner to tears. “You don’t say things like that. You just have really different values than me,” she said in a later clip from the episode. “I choose to be a mother to my three kids. I’m not here looking for another job. I already work enough, more than I would like to,” to which Kim responded, “You don’t do s–t.”

Kourtney then threw a jab of her own, saying, “You’re a very distraught, evil human being. I don’t wanna see you, OK? I don’t agree with who you are as a human being.”

The argument didn’t end there. After one viewer sided with Kourtney on social media on Thursday, August 2, tweeting that the eldest sibling was “done living this Kardashian life,” Kim clapped back with yet another low blow.

“Oh word, did Kourt tell you this? She sure wanna live that Kardashian life though, and BTW this photo shoot was our Christmas card. Family memories we were creating,” Kim responded. “Just tune in before you start acting like you know things.”

The explosive premiere of KUWTK will air on E! on Sunday, August 5 at 9 p.m. ET.