Kylie Jenner is never one to skimp when it comes to her choice in vacation outfits.

On Friday the 23-year-old makeup mogul showed off her killer curves and ample cleavage in a black ski jumpsuit while vacationing with her famous family in Lake Tahoe, California.

Looking ready to slay the slopes and more, Jenner posed up a storm in a series of sultry snaps on Instagram. 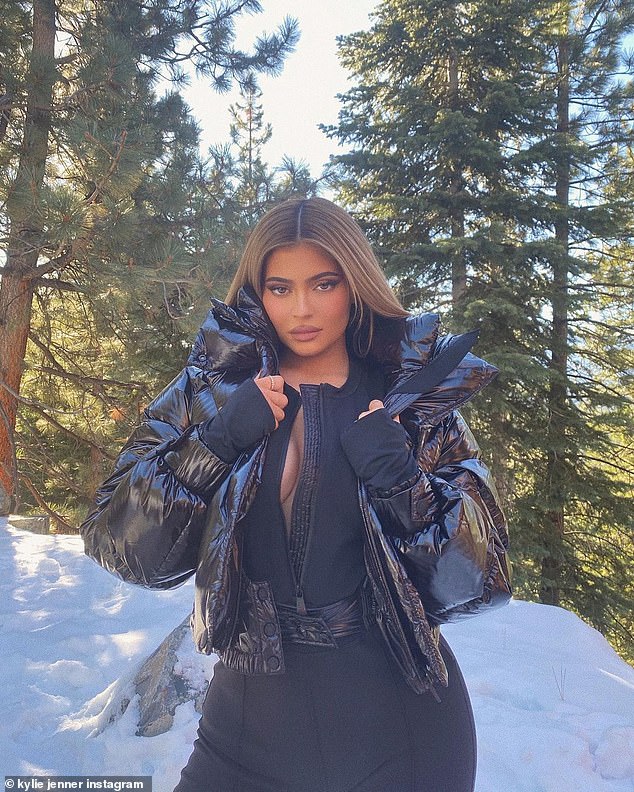 Ski bunny: Kylie Jenner, 23, flashes her ample cleavage in a form-fitting black ski jumpsuit while vacationing with her famous family in Lake Tahoe

Standing against a mound of snow in the form-fitting ensemble, Jenner left her jumpsuit unzipped at the top exposing a hint of her right breast.

With her hands clasped on a shiny black parka she pushed her enhanced tophalf down while pursing her lips for the camera.

Long caramel locks trailing behind her, Kylie completed the stylish number with a pair of oversized black goggles as she posed for a closeup snap.

She captioned the series ‘icy’ as she smoldered for the camera and worked her angles. 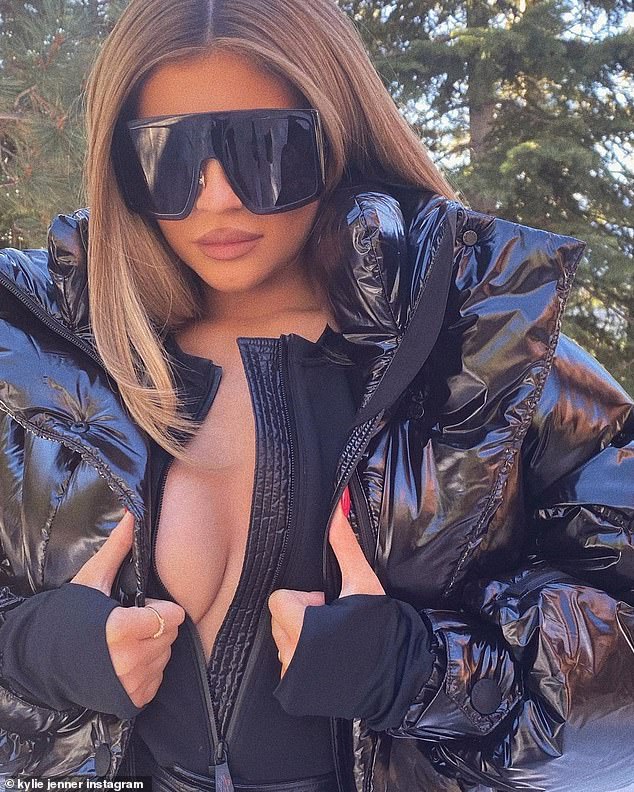 Snowy mounds: Kylie flashed her cleavage in the plunging jumpsuit as she completed the ensemble with a pair of oversized black goggles 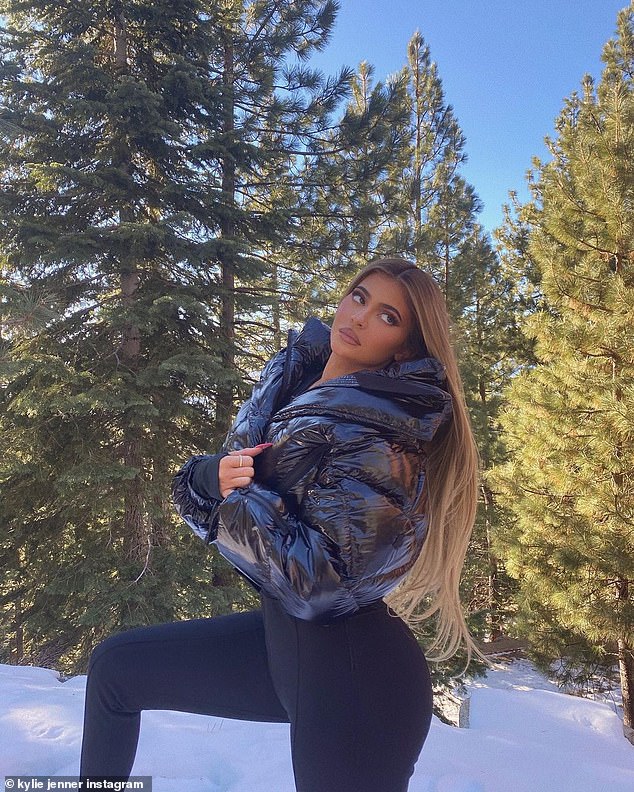 S’no bad days: Jenner continued to show off her exaggerated curves in the form-fitting garment as she worked her angles

Jenner showed off a pair of furry black snow boots with red laces to match her fiery red claws.

A cinched belt around her outfit highlighted the magnitude of her enviable figure as she displayed the results of some hard-earned sweat sessions in the gym.

The mother of one seemed keen to enjoy a few days in a winter wonderland with her siblings before jetting home on her Kylie Air jet to gear up for Christmas. 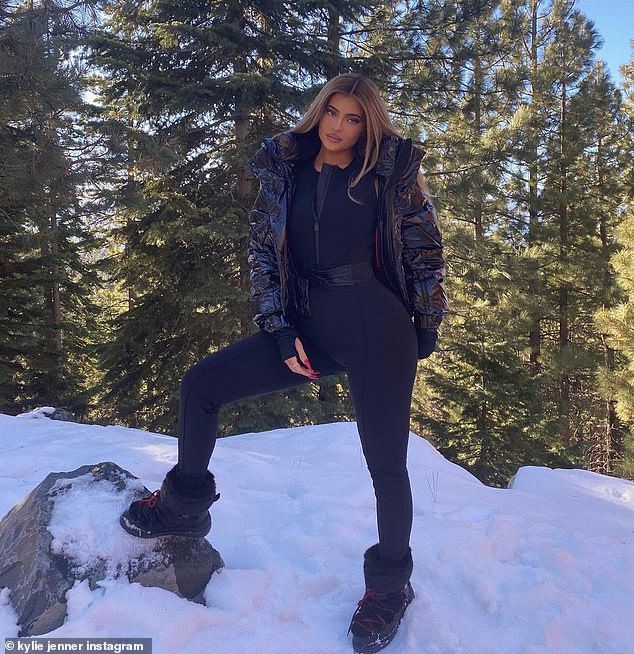 Red accents: She showed off a pair of furry black snow boots with red laces to match her fiery red claws. 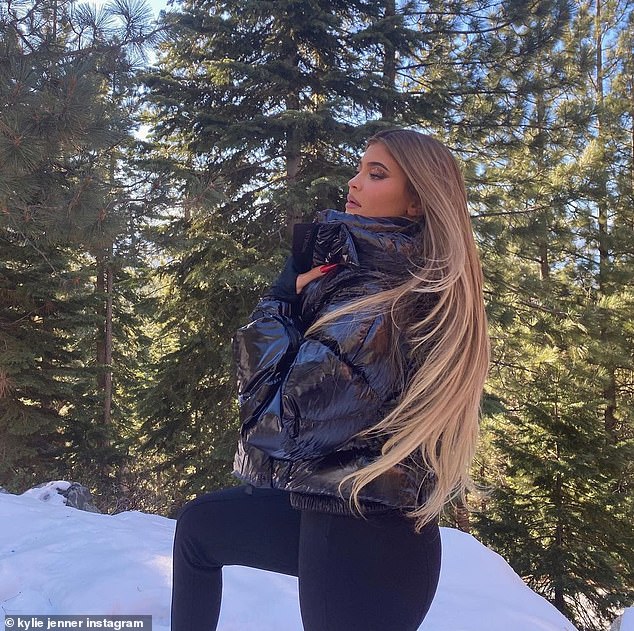 Windblown: Kylie’s caramel locks flowed in the wind as she showed off her stylish getup

While on vacation the family had a little fun as Kylie posted a TikTok where she and her sisters and mom Kris Jenner, went through their famous phone rolodex and prank facetimed some of their closest friends.

The ‘squad’ sat facing the iphone as they called Tristan Thompson, Travis Scott, The Biebers, Addison Rae, David Chappelle, and a handful of others who were shook nonetheless at seeing the ladies staring back at them without talking or moving.

Responses ranged from, ‘Am I in trouble,’ to panic laughter, to bewildered hellos, and the video naturally went viral upon posting. 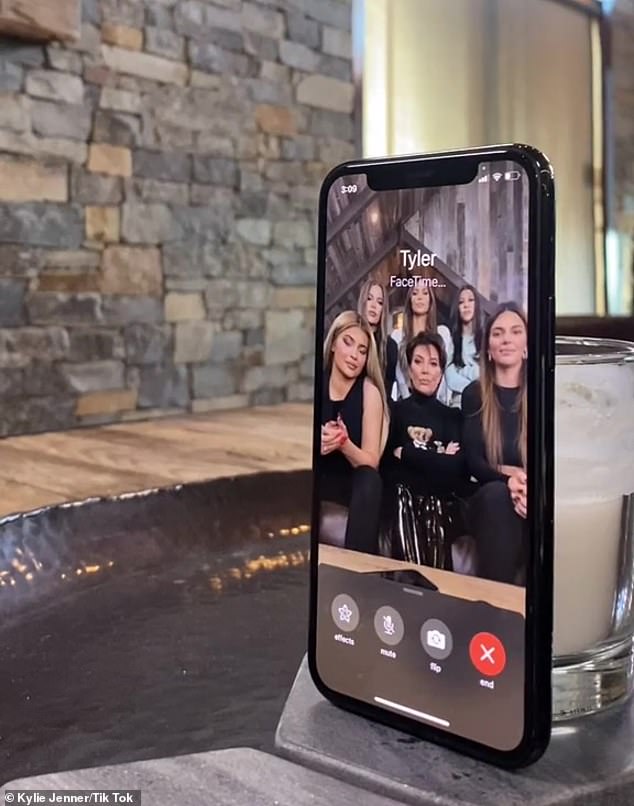 Punk’d: The famous family pulled a prank on some of their famous close friends as they dialed a long list of pals while staring at the screen on facetime without saying a word 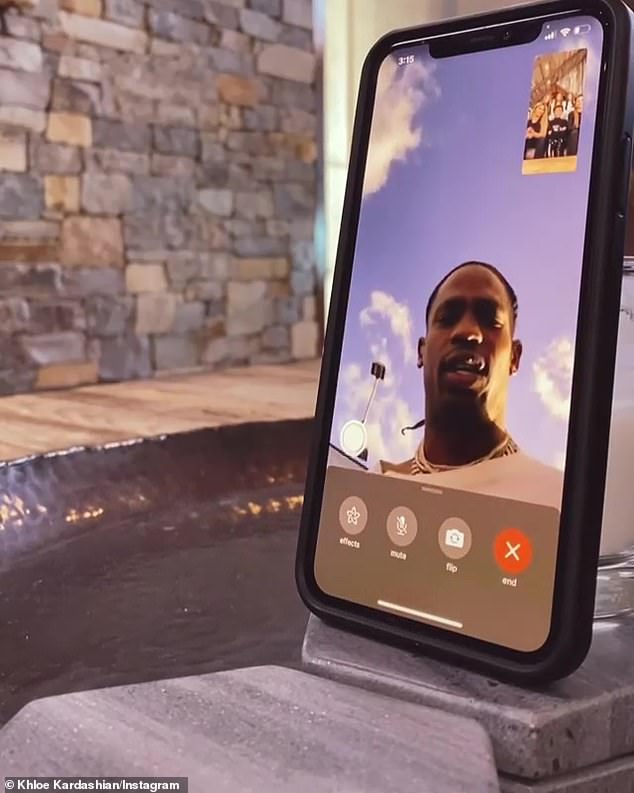 Baby daddy: Among the famous pals called Jenner was quick to dial Travis who was not present on the KarJenner Tahoe vacation

Returning home to her Holmby Hills mansion, Kylie was met with full blown Christmas cheer as she showed off her enormous tree that scaled the whole height of her house.

Giving her fans a tour of the ornaments – many of which she had as a baby – an emotional Kris got choked up at seeing them breathe new life into her billion dollar baby’s home.

Kylie documented the trip down memory lane on Instagram as she showed off stockings that she had when she was a baby and a slew of vintage santa decorations scattered around her house. 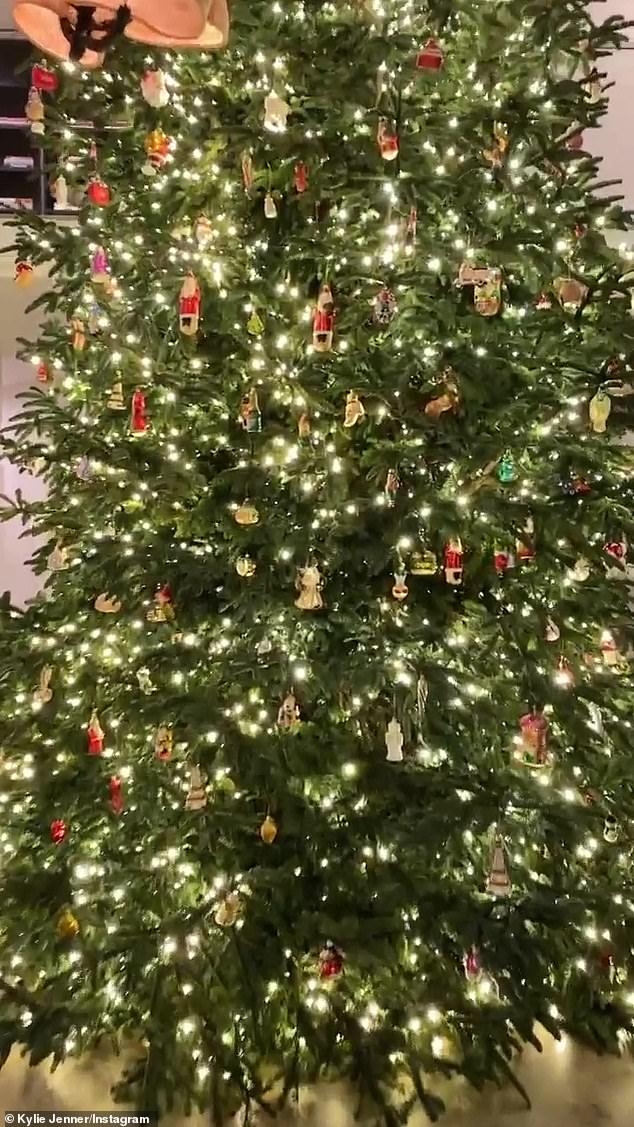 Deck the halls: Kylie showed off her enormous Christmas tree that featured ornaments from when she was a baby 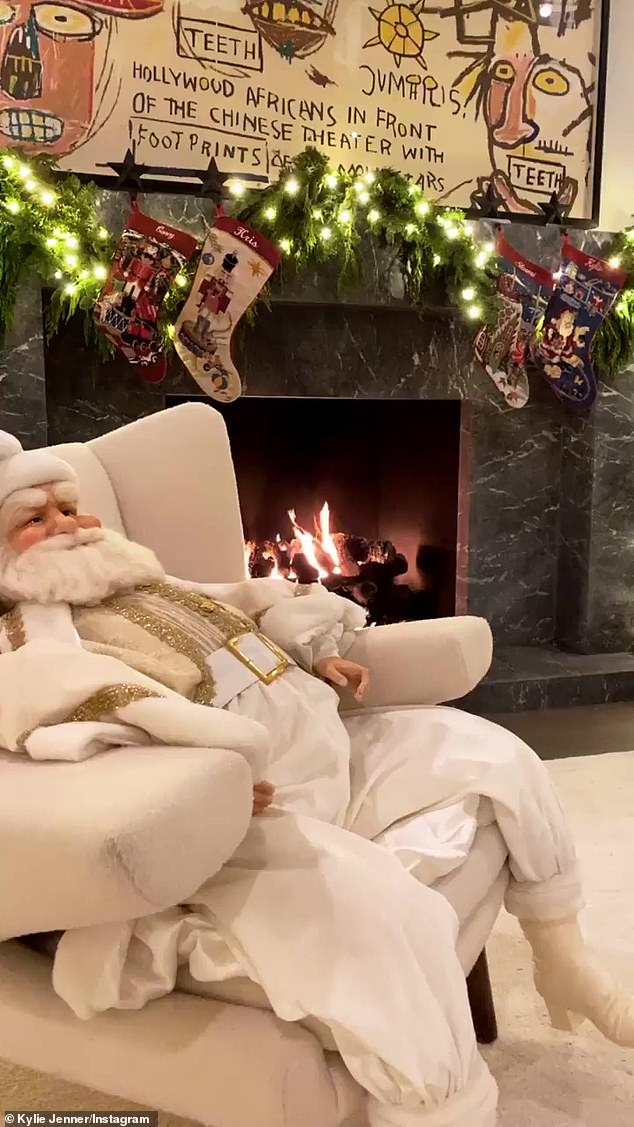 Santa baby: The Kylie cosmetics mogul showed off her collection of santas and festive decor around her house that rendered Kris to tears

A lot to celebrate this year, Jenner’s multimillion dollar cosmetics line recently found its way into upscale department stores Harrods and Selfridges in the UK as she continues to expand her empire at a global scale.

Jenner’s baby daddy Travis Scott – who celebrated Thanksgiving with Jenner and two-year-old Stormi – recently graced the cover of Forbes for their annual 30 under 30 issue after earning $100M this year.

Though not back together the pair have a close co-parenting relationship and often fuel rumors of rekindling despite overwhelming reports the two are strictly platonic at this point in time. 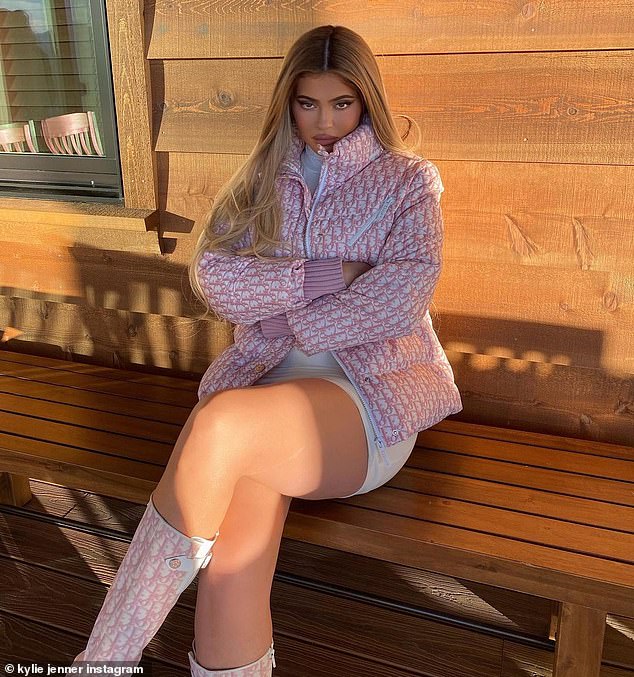 Head to toe: Kylie posed in head to toe pink Dior as she showed off another vacation look on Instagram