Leonardo DiCaprio, 47, shields his face as he makes a low-key appearance alongside girlfriend Camila Marrone, 24, at Coachella festival

Leonardo DiCaprio attempted to fly under to radar as he arrived at the Neon carnival at Coachella Festival in California on Saturday.

The actor, 47, shielded his face with a blue baseball cap and a protective face covering as he stepped out alongside his beau Camila Marrone, 24.

He kept his head down for his low-key arrival as he made his way through the crowds to attend the star-studded music event.

Sneaking in: Leonardo DiCaprio, 47, shielded his face as he put in a low-key appearance alongside his girlfriend Camila Marrone, 24, at Coachella festival in California on Saturday

He sported a satin navy bomber jacket as he placed his hands in his pockets and quickly strolled inside.

Leo added a pair of dark wash straight leg jeans and slipped into some black trainers with reflective panels.

Camila followed closely behind as she opted for a stylish cream midi dress with a matching chunky cable knit jumper.

Chic: Camila followed closely behind Leo, as she opted for a stylish cream midi dress with a matching chunky cable knit jumper

The model teamed her chic ensemble with a pair of brown leather cowboy boots and beaded turquoise accessories.

The Don’t Look Up actor has been in a relationship with Camila since December 2017 after her step-dad Al Pacino had introduced them years prior.

And though they’ve attended many high profile events, the two always make a point to walk the red carpet separately.

Under the radar: Leo kept his head down for his low-key arrival as he made his way through the crowds to attend the star-studded music event

The Los Angeles based duo share a home together and even adopted a few Huskies during 2020’s quarantine.

In November it was reported that despite keeping their relationship largely out of the spotlight, the couple are ‘closer than ever.’

This year’s Coachella line-up featured a massive change as earlier this month it was announced that The Weekend and Swedish House Mafia would be replacing Sunday night’s headliner Kanye West. 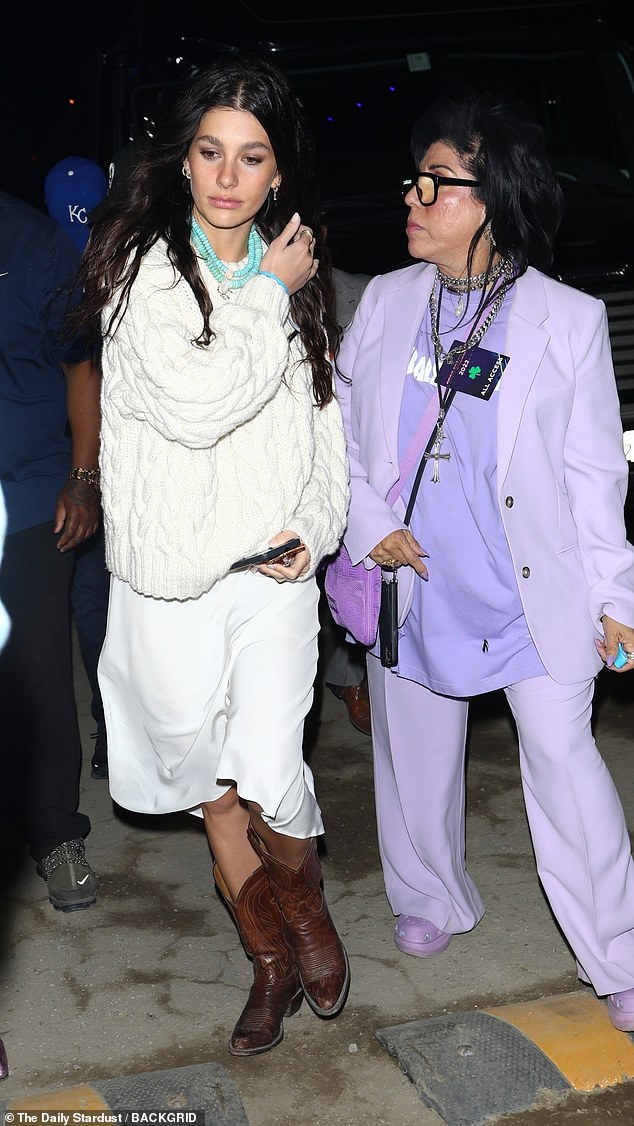 Festival ready: The Don’t Look Up actor has been in a relationship with Camila since in December 2017 after her step-dad Al Pacino had introduced them years prior

The Weeknd and the house music group – consisting of Axwell, Steve Angello and Sebastian Ingrosso – have a working relationship as they collaborated on hit track Moth To A Flame together and also have the same management team SALXCO.

This will also be Swedish House Mafia’s big return to the highly-popular music festival as they have not performed at it since 2012 as they disbanded in 2013 at their absolute peak of popularity.

The Weeknd first hit the Coachella stage in 2012 and then three years later in 2015. He officially headlined the festival in 2018 with Beyonce and rapper Eminem. 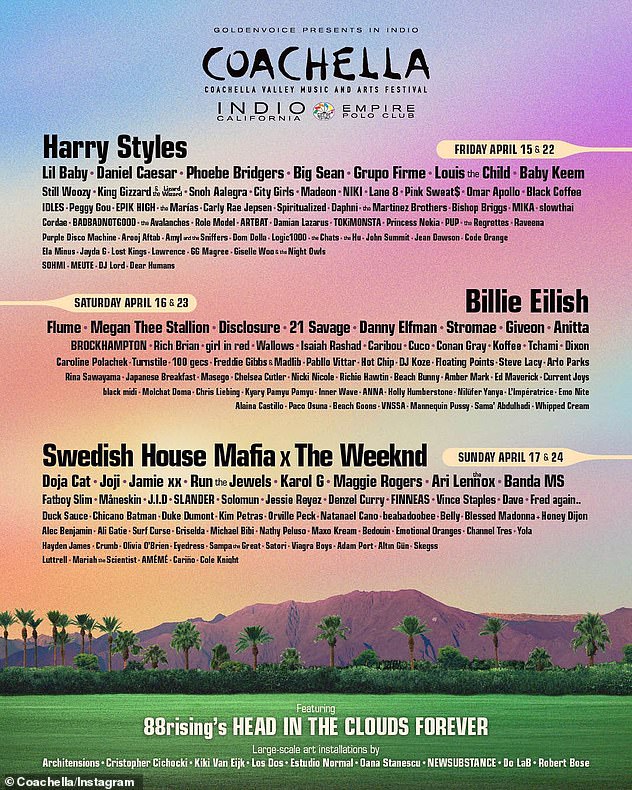 Gazing at the stars: The complete festival line-up is shown as it was updated earlier this month

Rapper Kanye, 44, was set to co-headline the annual festival with Billie Eilish and Harry Styles, both of whom are considered pop/alternative acts, as well as house music group Swedish House Mafia.

Organizers were scrambling to salvage the long-awaited festival after Kanye announced earlier this month that he’d no longer be performing.

Kanye is said to have made the decision himself to bow out from the two weekend event.

Travis Scott was said to be appearing with Kanye – who has changed his name to Ye – and will also no longer perform, the outlet reported. 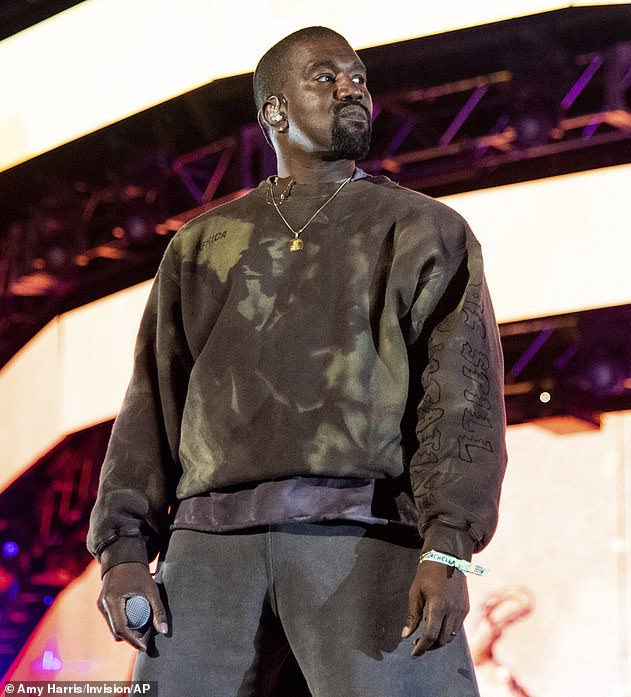 Last-minute: Organizers were scrambling to salvage the long-awaited festival after Kanye West announced earlier this week that he’d no longer be performing; Kanye pictured at Coachella 2019

Travis had been tapped as the headline act for the festival 2020 before it was canceled due to COVID. He was then booked again for 2022 but organizers scrapped those plans after his Astroworld concert tragedy that left 10 people dead.

It remain unclear exactly why Ye had pulled out of the show so last minute. A source has claimed to Variety that West had not rehearsed or prepared for the appearance.

Back in January 2021 it was announced that the highly-popular music festival in Indio, California would be returning in Spring 2022 after two years of rescheduling due to the COVID-19 pandemic. 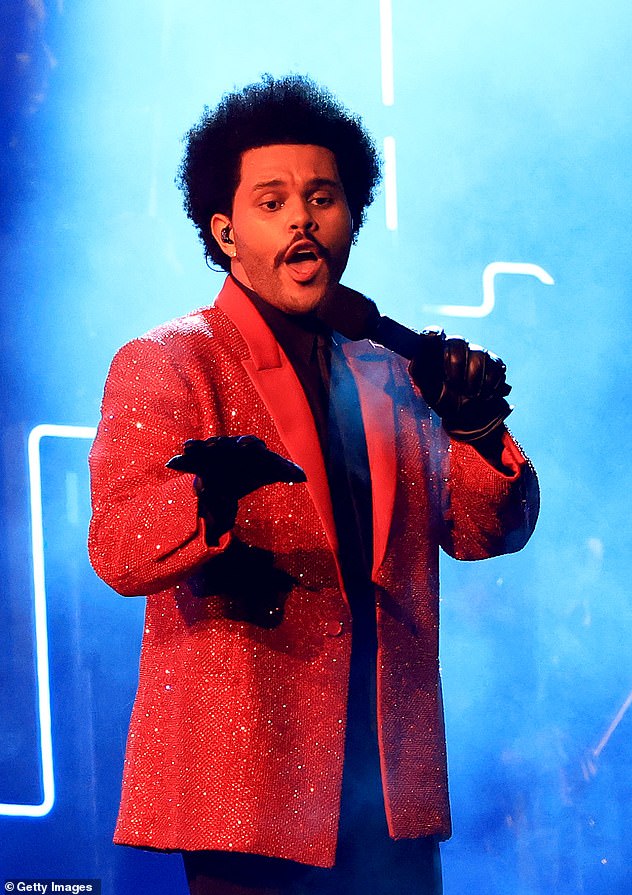 Top man: It was announced earlier this month that The Weeknd (seen at the Super Bowl in February 2021) will fill Kanye West ‘s headliner spot at this year’s Coachella after the rapper decided to pull out of the festival just two weeks before kick off

One of the world’s largest musical festivals, the event has been held every spring in the Coachella Valley in the Colorado desert since 1999.

After being pushed back due to the pandemic, the festival announced its long awaited return on New Year’s Day 2021 with a simple tweet that read: ‘See you in the desert.’

When the coronavirus pandemic hit the US last year the festival rescheduled from April 2020 to October 2020, before being outright cancelled for the first time in 20 years that June.

The music festival attracts over 250,000 attendees over two weekends to dance and rave to a wide variety of artists. 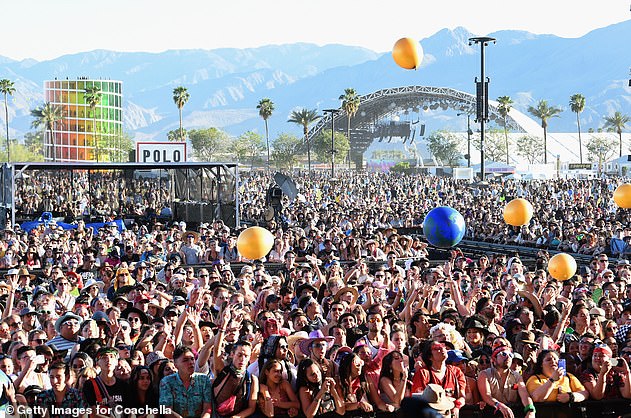 Party time: The festival (pictured in 2019) attracts over 250,000 attendees over two weekends to dance and rave to a wide variety of artist