While she’s widely known as one of Britain’s most celebrated actresses, her impeccable sense of style has also won her a devoted army of fans.

And Dame Helen Mirren, 74, showed exactly why she consistently turns heads on Sunday, when she stepped out for Victoria Beckham’s London Fashion Week show.

The Oscar-winning actress was resplendent in a flowing snake print long-sleeved dress as she entered Whitehall’s Durbar Court ahead of the hot ticket presentation. 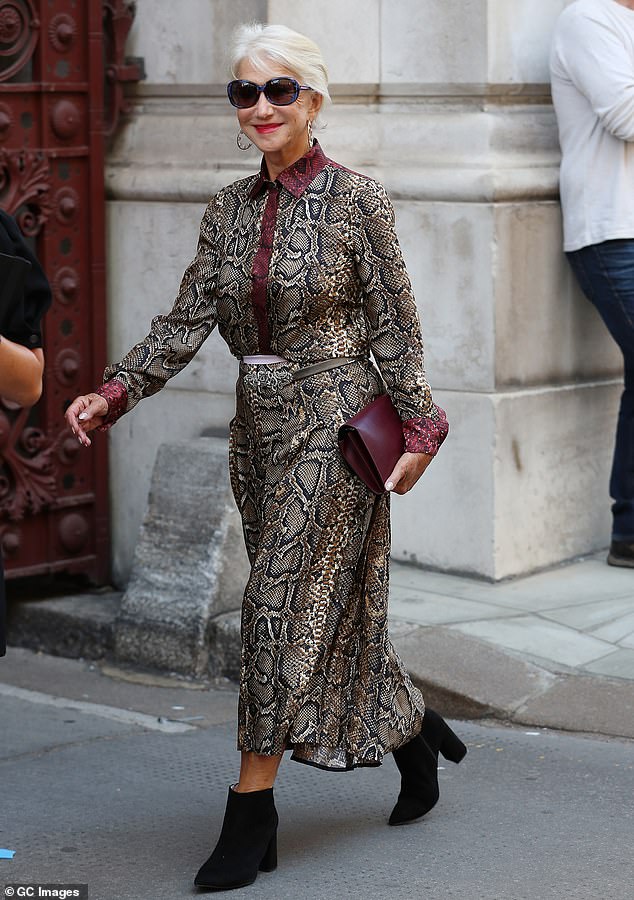 Her flattering frock featured red accents along the collar, button seam and cuffs and was cinched at the waist with a lilac sash, which sat above a black leather belt.

Teaming her gown with a pair of black suede booties, the star accessorised with a burgundy leather clutch bag.

She shielded her eyes from the early autumn sunshine with a pair of oversized blue-rimmed sunglasses, while large hoop earrings added an extra touch of sparkle. 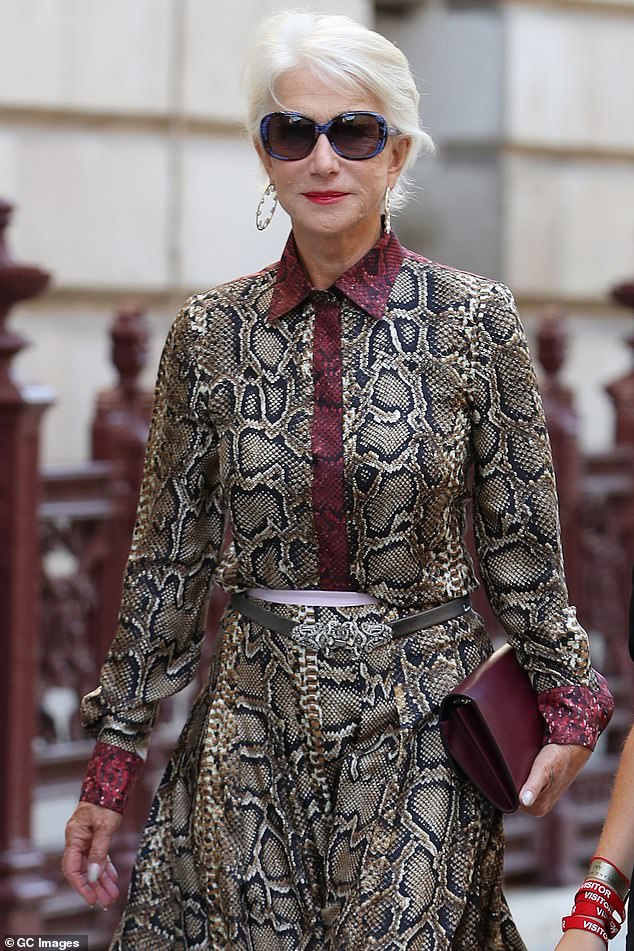 Wow: The Oscar-winning actress was resplendent in a flowing snake print long-sleeved dress

Accents: Her flattering frock featured red accents along the collar, button seam and cuffs and was cinched at the waist with a lilac sash, which sat above a black leather belt 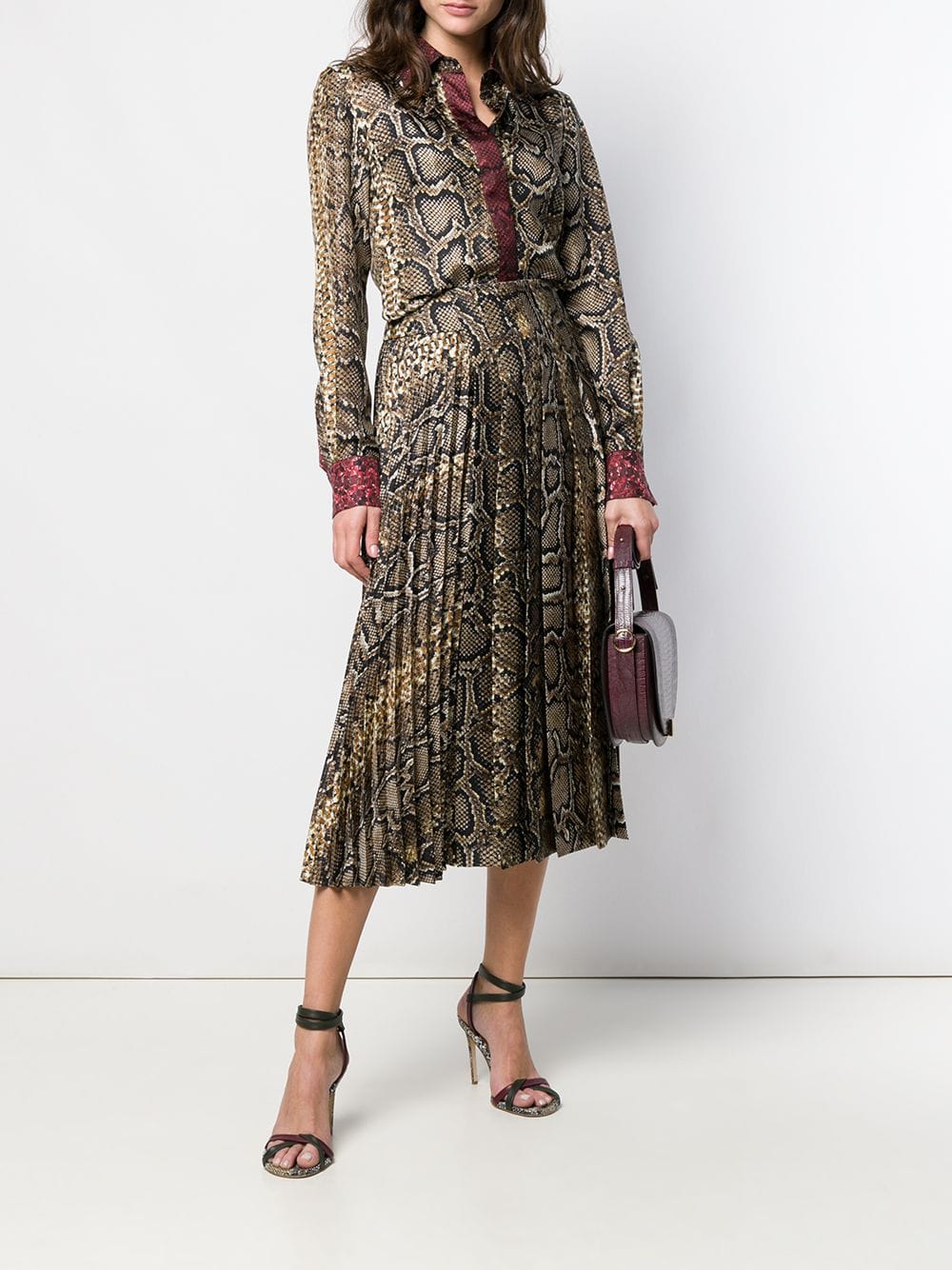 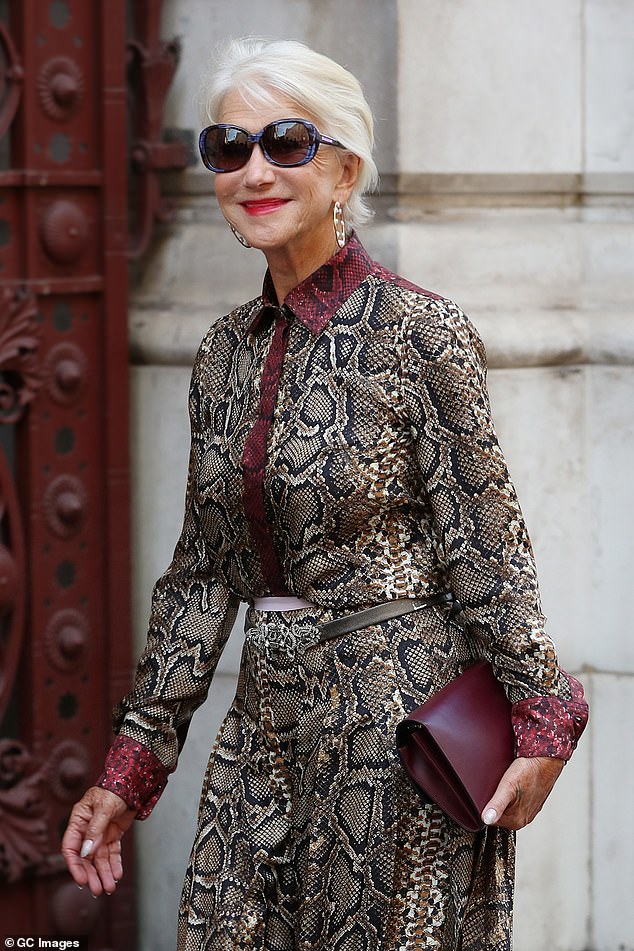 Sparkle: She shielded her eyes from the early autumn sunshine with a pair of oversized blue-rimmed sunglasses, while large hoop earrings added an extra touch of sparkle

Helen was one of number of familiar faces in attendance at the show, including Victoria Beckham’s husband David and their four children.

The star’s outing comes days after she detailed the story behind the famous bikini snap showing her incredible body on an Italian beach, which surfaced in 2008.

Speaking to KTLA’s Sam Rubin, the actress revealed that she was just trying to ‘suck in her stomach and her cheeks to look good’ for an impromptu snap taken by her husband Taylor Hackford, when she noticed a camera flash in the distance.

When quizzed by Sam about the famous shot, Helen revealed: ‘So, we were there (Italian beach), swimming a little bit, lying in the sun, and Taylor said, “Stand up, I want to take a picture of you.” 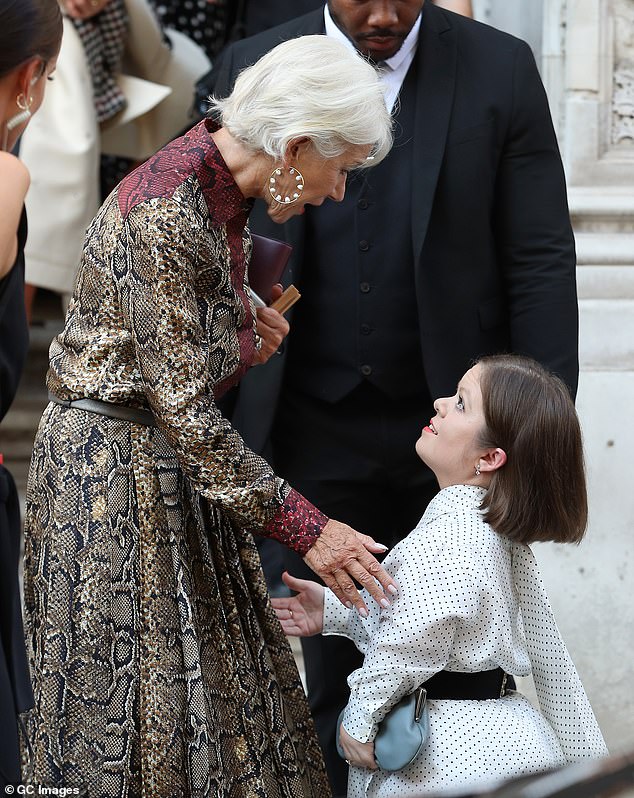 Quick chat: As she entered the venue, Helen stopped for a chat with Irish writer Sinéad Burke 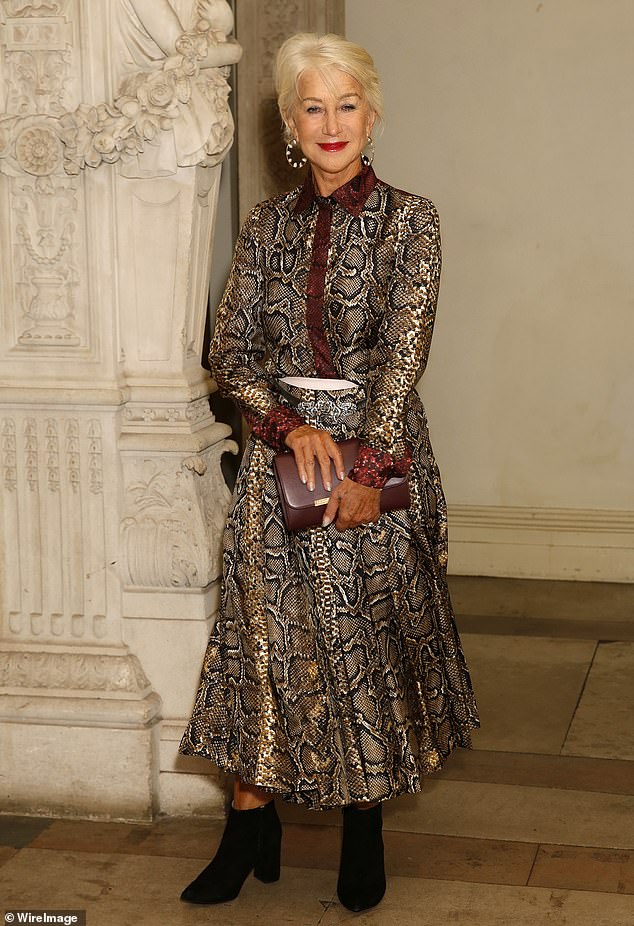 Strike a pose: Once inside the imposing building, the actress posed for event photographers

‘So I stood up, and sucked my tummy in because my husband was taking my photo. I tried to suck my cheeks in. I tried to look… good.’

Noticing her hesitation, Sam quipped: ‘You were about to say “sexy”!

Helen burst into a fit of giggles: ‘Hahaha, I was, but no!’ She continued to detail her story: ‘Just as he took the shot, I saw a flash in the hills.

‘Taylor said, “What’s the matter?” I said, “There’s paparazzi up there!”

‘He said, “No, there isn’t, don’t be ridiculous! How can they be up there, that’s absolutely absurd. You’re paranoid!” Of course, three days later, that shot came out!’ 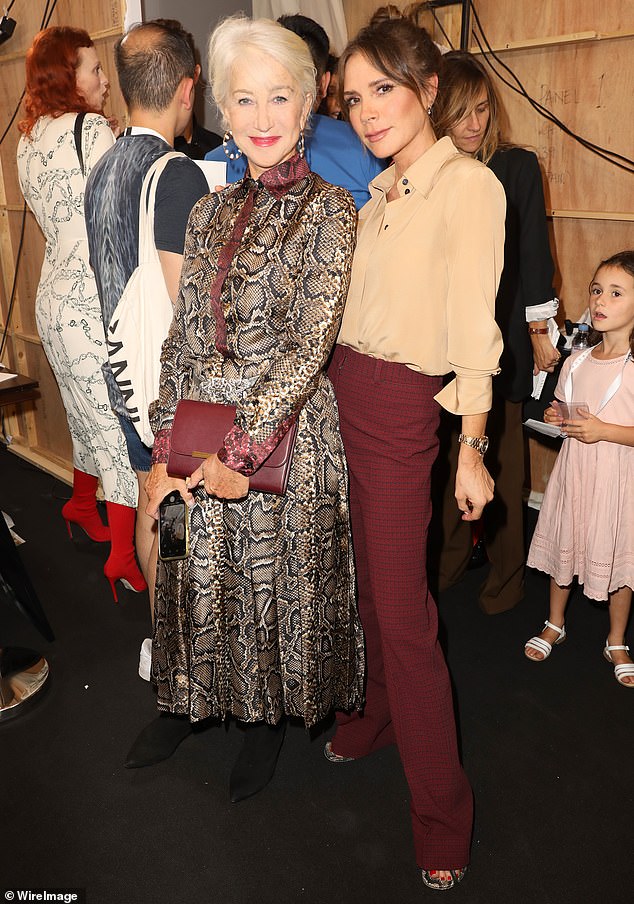 Woman of the moment: She also posed for photographs with designer Victoria Beckham 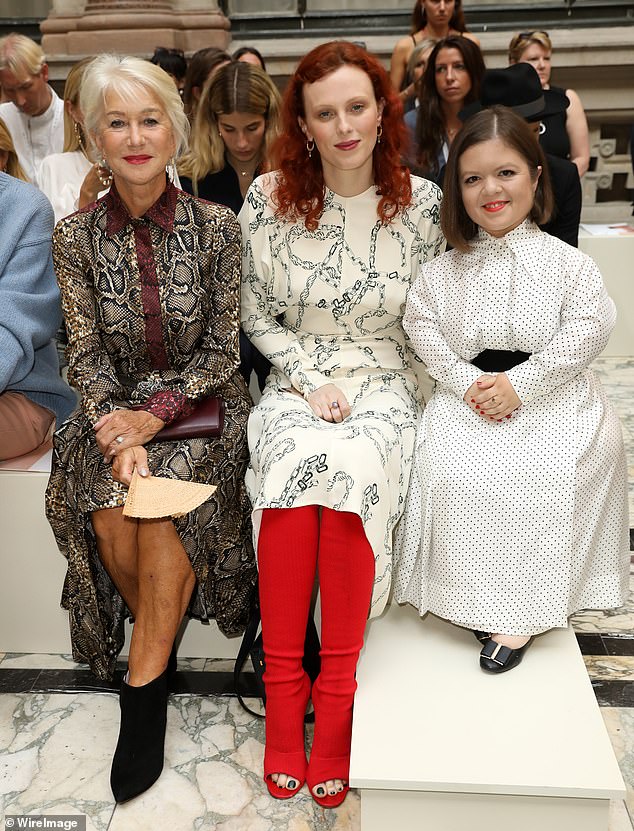 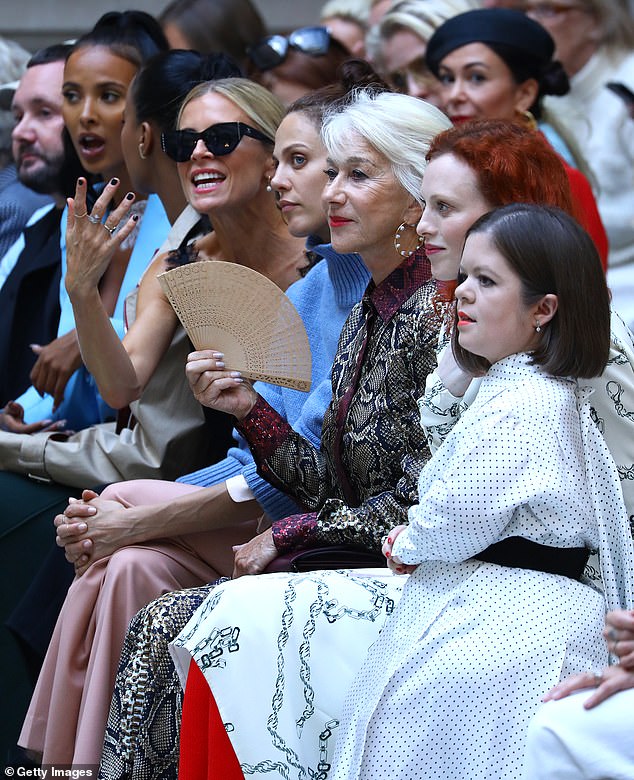 Feeling hot: As temperatures soared over the English capital, Helen kept herself cool with a fan

In 2016, it was revealed that business opportunities arose for the then-63-year-old actress in 2008, although she reportedly refused them all as she was ‘not interested’ in profiting from the now-famous shot.

Helen’s screenwriter nephew Simon spoke to The Times about his superstar relative and her insistence not to seek fame.

Simon said: ‘I begged her to turn us all into millionaires by marketing bikinis after everyone went wild over her fit bikini body but she said: “Absolutely no.” She’s not interested. She won’t brand herself like that.’

Millions of women around the world were left stunned after seeing the picture of Dame Helen in her bikini on holiday yet she admitted that the famous shot will ‘haunt’ her for the rest of her life. 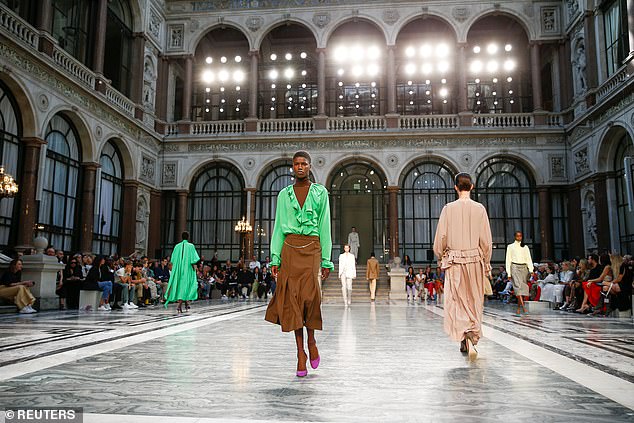 Breathtaking space: The presentation took place at the breathtaking Durbar Court in Whitehall 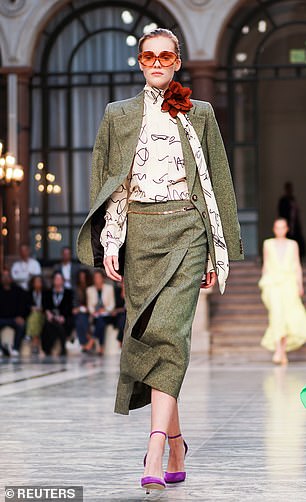 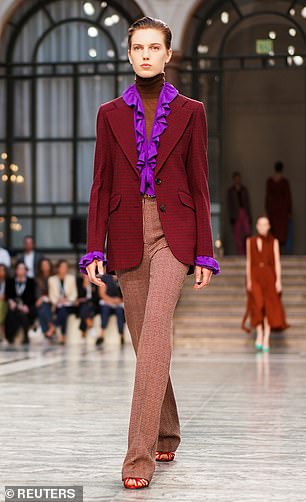 Structured looks: The models stepped out in an array of rich tones with structured silhouettes

Talking about the shot previously, Helen said: ‘I think the thing that will haunt me for the rest of my life is that bloody photograph of myself in a bikini.

‘In and of itself, it is a lie because I don’t actually look like that and I know that that is going to haunt me forever and I’ll be forever trying to bury it unsuccessfully.’

Meanwhile, the Oscar-winning actress’ career is still going strong, and she was last seen in Fast & Furious Presents: Hobbs & Shaw.

Helen will next be seen in the drama flick, The Good Liar, which is released on November 15th and also stars Ian McKellen. 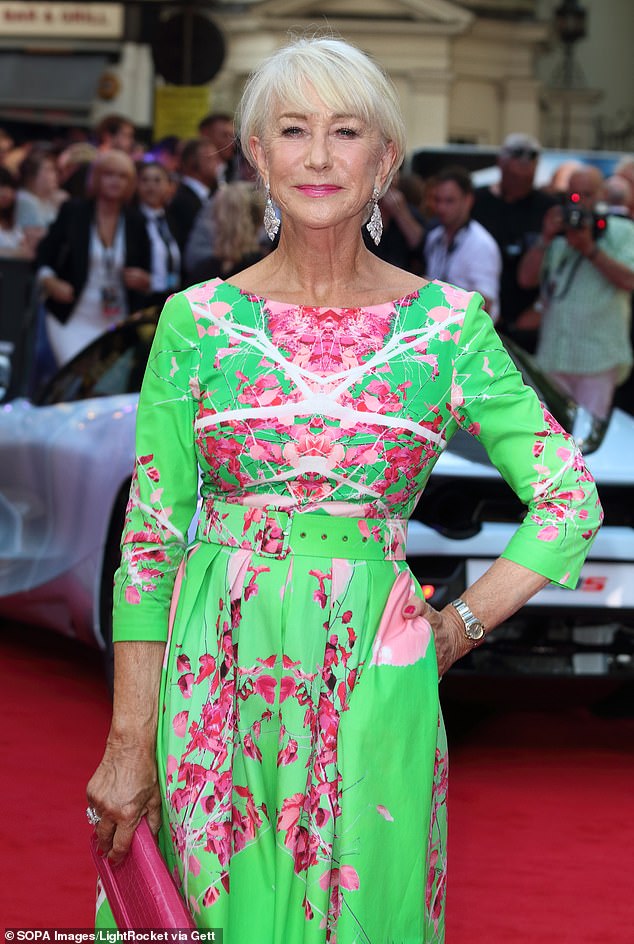 Chic: While she’s widely known as one of Britain’s most celebrated actresses, her impeccable sense of style has also won her a devoted army of fans. Pictured in July