She never fails to turn heads with her fashionable ensembles.

And Lottie Moss looked sensational as she flaunted her model figure while strutting around London on Wednesday.

The blonde beauty, 22, put on a sizzling display in a cut-out black bodycon dress which flashed a glimpse at her taut midriff. 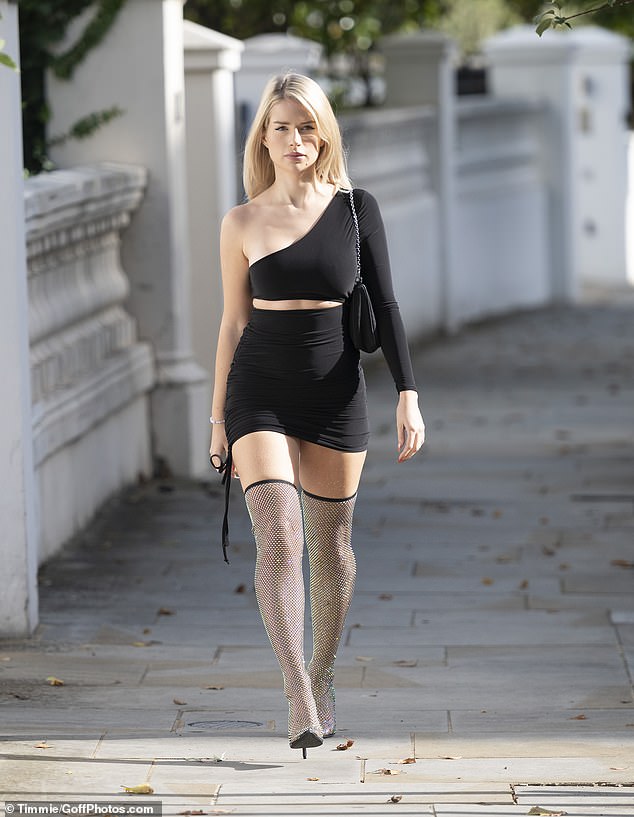 Work it: Lottie Moss looked sensational as she flaunted her model figure while strutting around London on Wednesday

Lottie exuded confidence in the short dress, from the Nasty Gal Ft Em Rata collection, which accentuated her toned frame.

She wore her blonde locks down and perfectly styled to frame her face as she walked along the street.

The beauty also put on a leggy display in a pair of thigh-high mesh heels which sparkled in the sun and boasted a pointed-toe.

Not forgetting her accessories, Lottie toted a small black handbag with a silver chain under one arm and completed her look with a stylish silver bracelet.

Strut: The model  exuded confidence in the short dress which flashed a peak at her taut midriff 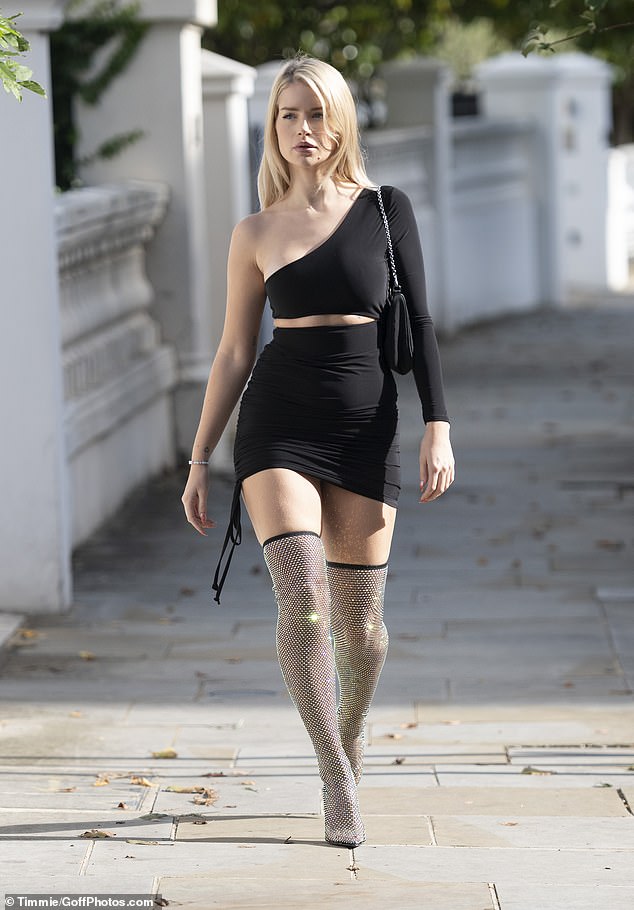 Here she comes: Lottie completed her stylish ensemble with some eye-catching mesh shoes

Later on Wednesday Lottie proved she can rock any look as she cut an elegant figure while holding a dinner to celebrate her partnership with new social networking app Victoria.

The stunner was joined by five friends at the private event at Home House in London including fellow model Hana Cross.

Lottie showcased her sense of style in a grey pinstripe vest top and matching trousers as she posed up a storm inside the private members’ club.

Displaying her taut midriff, the social media star added height to her frame with a pair of clear heels. 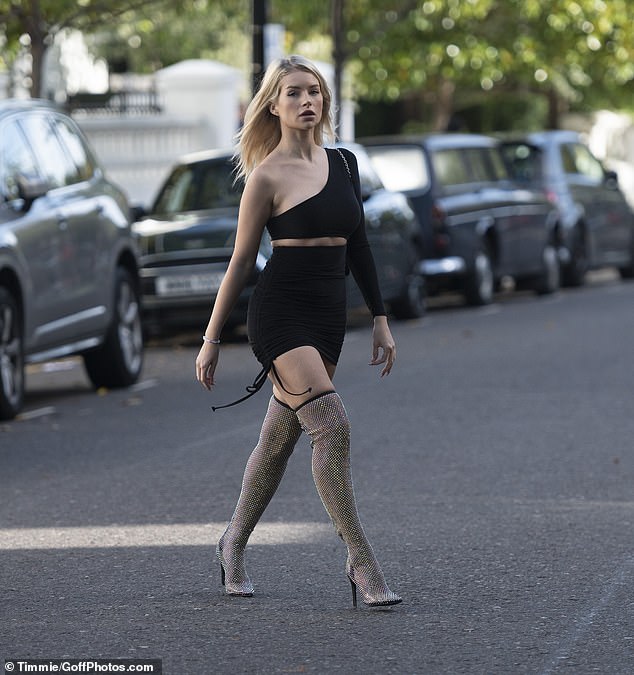 Looking good: The blonde beauty put on a leggy display in her figure hugging number 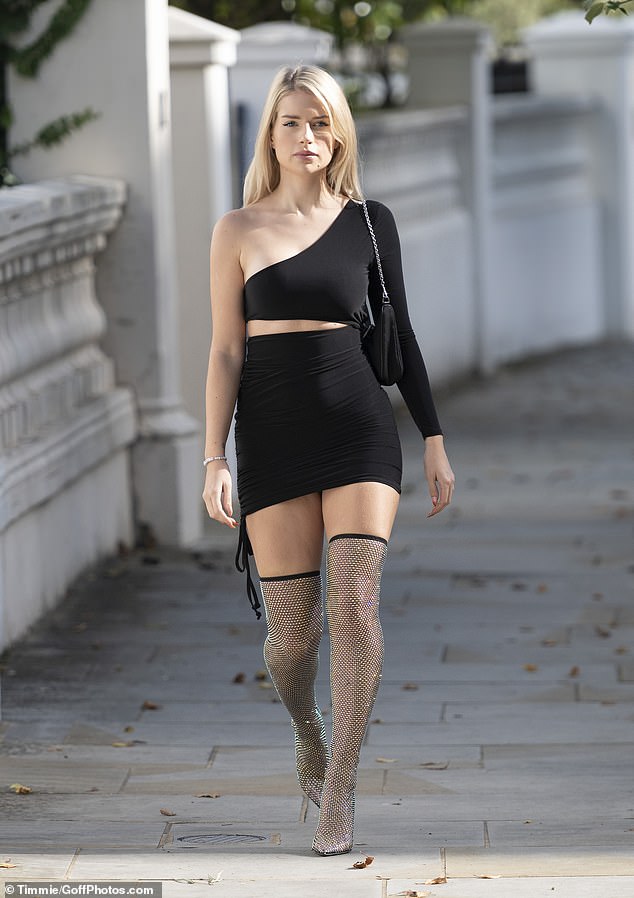 Glam: Lottie wore her blonde locks down and let her side fringe frame her face

Toned: She covered up one svelte arm with her little black dress but left some skin on display 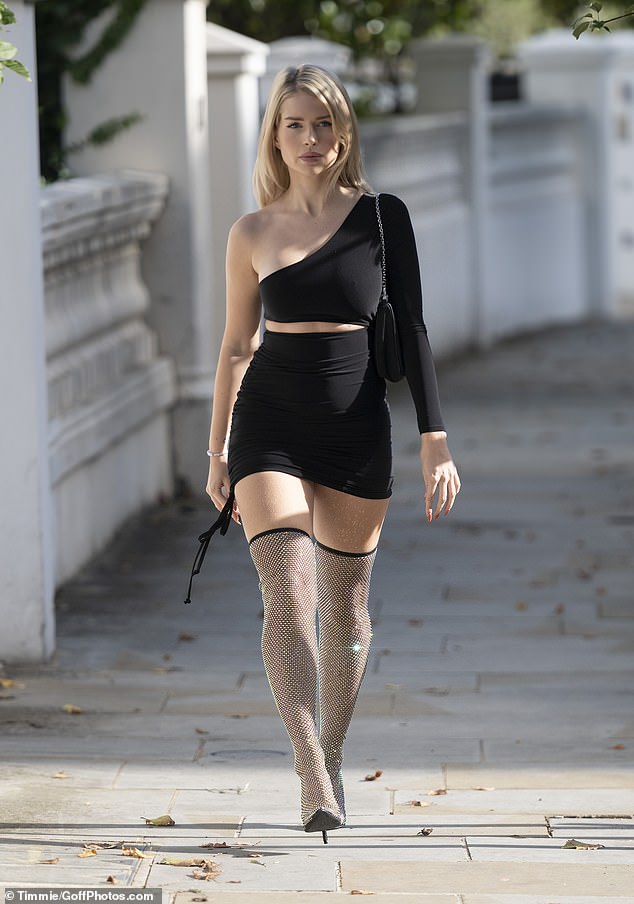 Model: The beauty looked every inch the model as she walked along the street on Wednesday 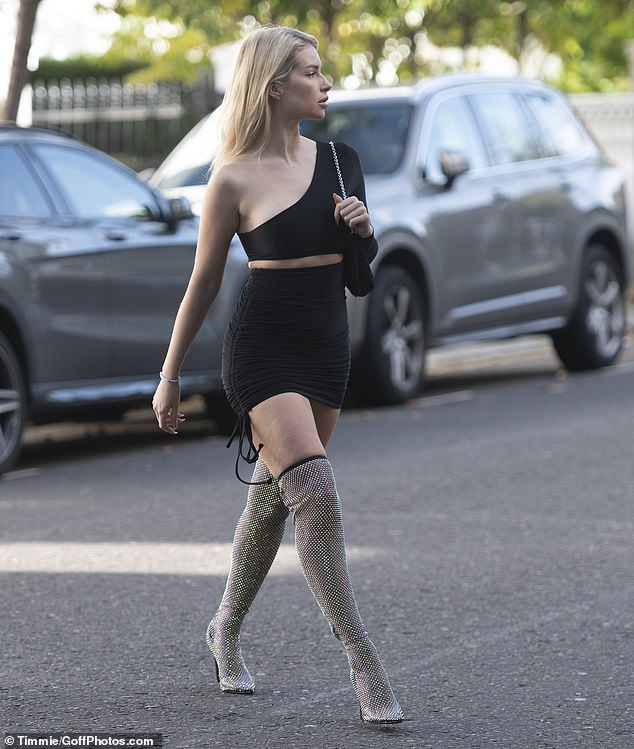 Details: Lottie toted a small black bag with a silver chain for the outing

Lottie was flying solo on the outing, but she has been linked to a string of men in recent weeks.

Earlier this month, Lottie was seen putting on a cosy display with a mystery hunk following a lavish meal with friends in London.

Elsewhere, she fuelled dating speculation as she spent time with Love Island star Chris Hughes during a recent holiday.

In videos and pictures shared to Instagram, Chris, 27, can be seen putting on a cosy display with the blonde, and even proceeds to drape his leg over her. 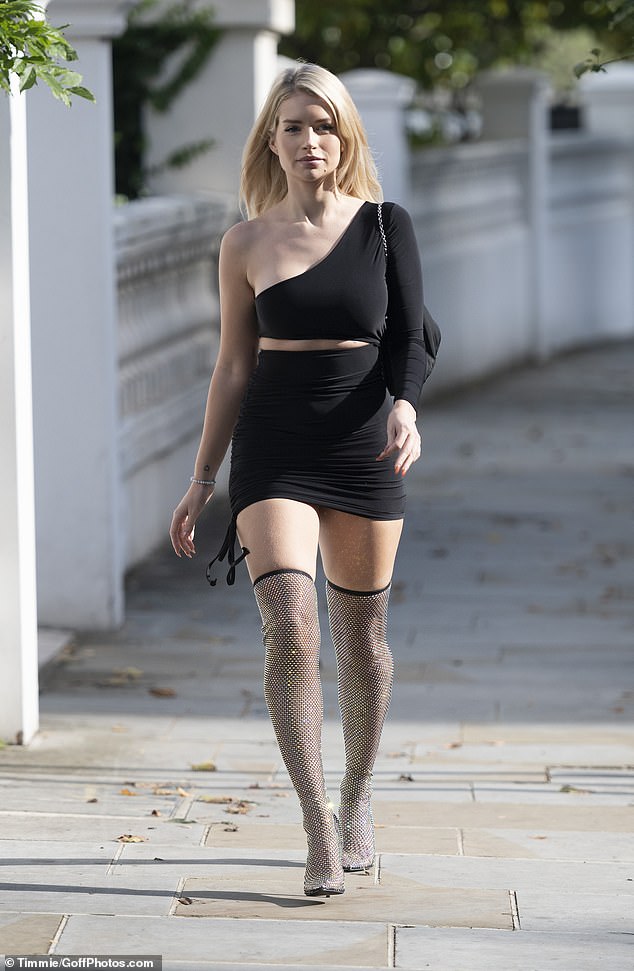 Beauty: She added a face of neutral makeup including a touch of nude lipstick 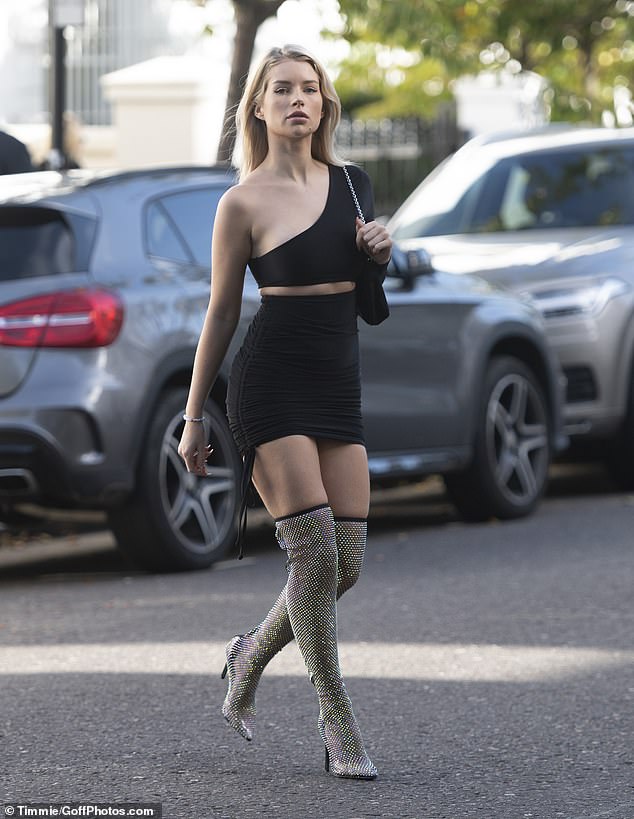 Work it: The model put on a leggy display in a pair of thigh-high mesh heels which sparkled in the sun and boasted a pointed-toe 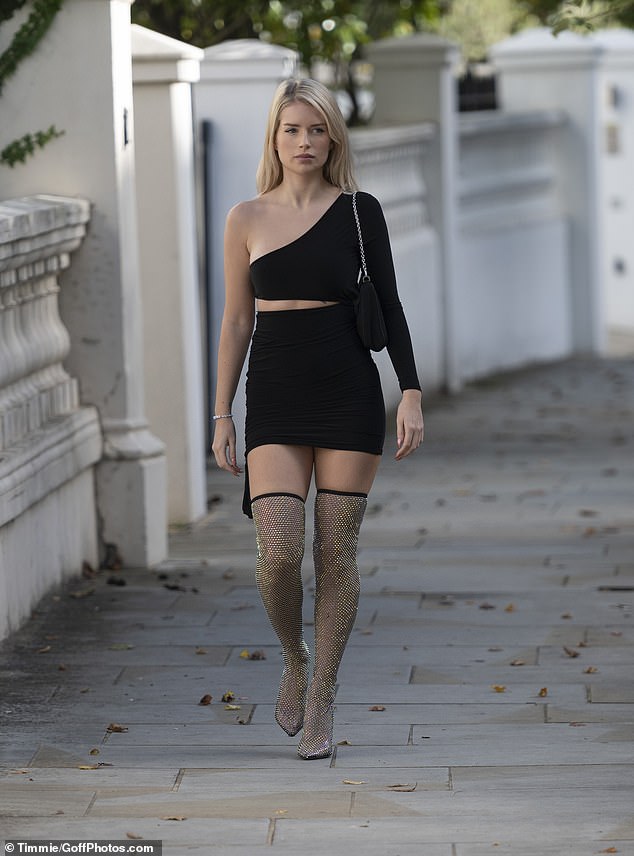 Busy: After taking a stroll around London, Lottie hosted a private dinner for pals

Lottie was also linked to Roman Kemp amid claims she had been on a ‘tipsy’ date with I’m A Celebrity star and Capital FM host.

News of their alleged fling came just three weeks after the broadcaster split from his girlfriend of three years Anne-Sophie Flury.

A mutual friend told The Sun on Sunday: ‘They have known each other through the party circuit for a few years, but nothing has ever happened before.

‘Roman’s always thought she was beautiful, and decided to pluck up the courage to ask her out.’ 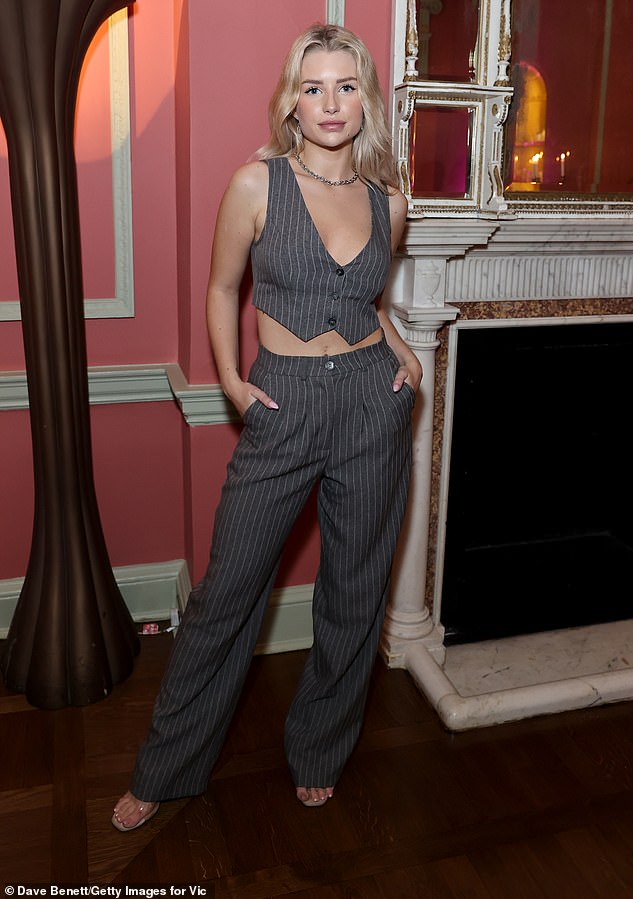 Stunning: Lottie proved she can rock any ensemble as she cut an elegant figure as she hosted a private dinner to celebrate her partnership with new social networking app Victoria