Home » Celebrities » Love Island SPOILER: TWO couples will be dumped from the show in twist

Love Island SPOILER: Shock twist set to rock the villa as TWO couples will be booted off the show in dramatic dumping

Last week’s explosive recoupling saw a whopping six contestants get the boot from the villa.

And on Monday’s edition of Love Island, Anna Vakili’s 29th birthday celebration gets interrupted as two couples will be dumped from the ITV2 dating series in an explosive twist.

In scenes set to appear on the upcoming episode, the group let their hair down during the wild party until Maura Higgins receives a text which reveals four contestants will make an exit from the show as a result of both a public vote and their fellow Islanders. 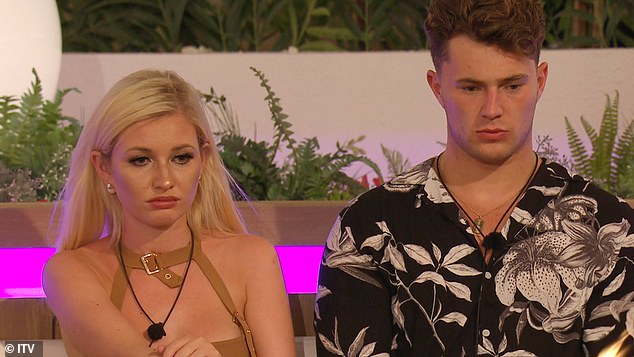 Vulnerable? On Monday’s edition of Love Island, two couples will be dumped from the ITV2 dating series in an explosive twist (pictured Curtis Pritchard and Amy Hart)

The evening starts off with a bang as pharmacist Anna celebrates her birthday in style alongside her pals.

London native Anna is blown away by the effort the group have made as she gushes in the Beach Hut: ‘It touched my heart. It made me feel so special. I felt like the luckiest girl, ever!’

Proving he’s every inch the doting partner, Anna’s on-off beau Jordan Hames delivers a sweet speech to his love interest in front of the contestants.

The 24-year-old model, who was embroiled in a love triangle with Anna and Ovie Soko, 28, jokes: ‘Huge happy birthday to Anna. Also, we can officially say that she is a cougar now.’ 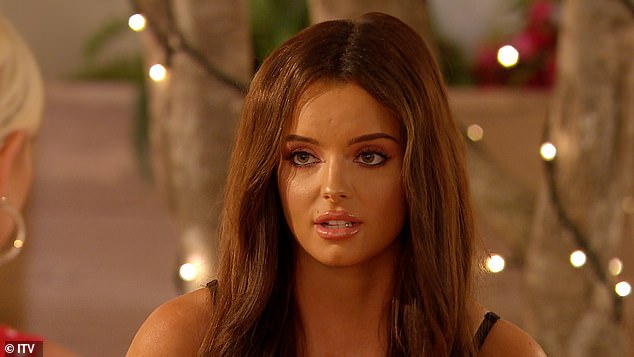 Uh oh: In scenes set to appear on the upcoming episode, the group let their hair down during the wild party until Maura Higgins (pictured) receives a shock text

Showcasing their vocal talent, they sing: ‘Our girl today is 29 and we must say she looks way fine. Anna is clever, wise and strong, she’s always there when something goes wrong.

‘Jordan says he loves her toes; will he suck them? No one knows! This song is going on without further ado, all that is left to say is happy birthday to you.’

Putting an abrupt end to the fun-filled celebration, ring girl Maura, 28, receives a text which reveals the public have been voting for their favourite couple, and three couples with the fewest votes risk elimination. 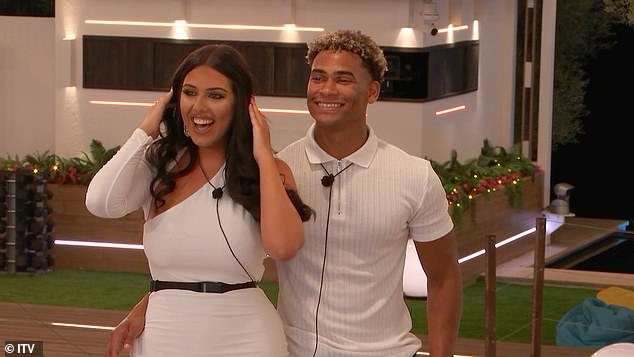 Happier times: The evening starts off with a bang as pharmacist Anna celebrates her birthday in style (with on-off beau Jordan Hames) 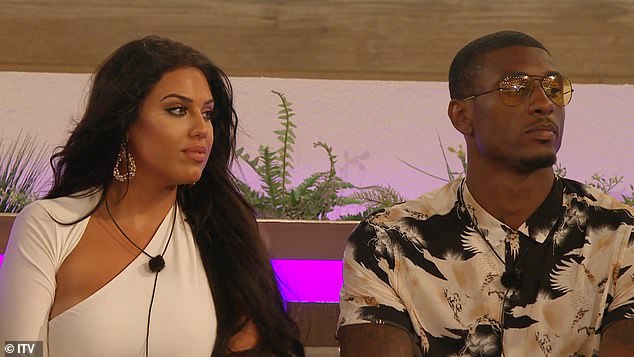 They’re over! Basketballer Ovie Soko and Anna are at risk of being dumped following their split on Sunday’s episode, which saw the bombshell ran back into the arms of Jordan 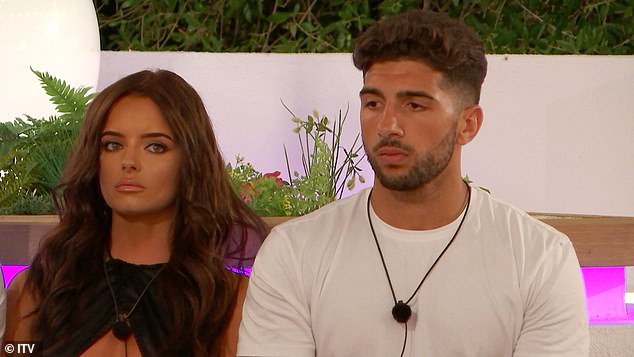 Eek: Maura, 28, put all her eggs in one basket by revealing her feelings to Curtis, 23, on Sunday’s episode, after she called time on her romance with Marvin Brooks

As Amber Gill, who was coupled up with Michael Griffiths, and Anna’s former partner Jordan are single, the lucky pair are exempt from the vote and dumping.

After the couple with the least vote gets the boot, Tommy receives a text which reads: ‘One more couple will be dumped, the other couple will remain in the villa.

‘The couple which stays and couple that is dumped will be decided by your fellow Islanders’.

The shock twist will see Amy and her former ‘half-boyfriend’ Curtis Pritchard risk being dumped from the island. 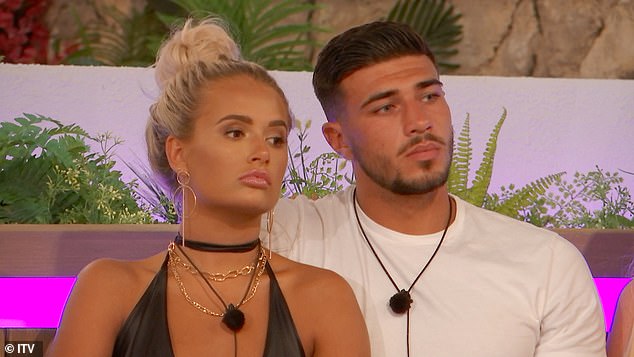 Loved-up: Molly-Mae Hague and Tommy Fury appear to be one of the strongest couples in the villa 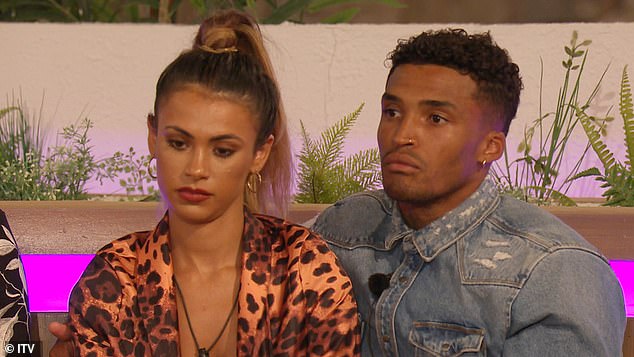 Rocky: Michael Griffiths and Joanna Chimonides was recently rocked when she accused him of failing to properly end things with ex Amber Gill 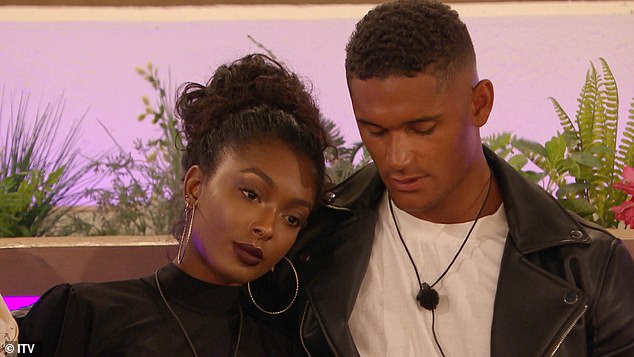 Budding: After causing Curtis’ head to turn, Jourdan Riane has been loved-up with model Danny Williams

Despite still being in a couple, dancer Curtis confessed to the flight attendant that his head had been turned by the arrival of the new Love Islander Jourdan Riane last week, who has since coupled up with Danny Williams.

Following his break up with Amy, the ballroom pro went on to admit: ‘It’s probably going to be horrible to hear but I do feel like a weight has been lifted off my shoulders.’

Curtis further infuriated the former beauty queen during Sunday night’s show after he agreed to offer Maura a ballroom dance lesson, with Amy watching on from the kitchen.

After previously admitting to pal Lucie Donlan that she had started to develop feelings for the dancer, the brunette decided to make her feelings known to Curtis on Sunday by pulling him aside for a chat.

The Irish bombshell told Curtis: ‘Well this is very awkward for me, so this might come as a shock.’

She continued: ‘So obviously you were coupled up with Amy and when I came in here a lot of the girls asked me who would you go for if you came in earlier on, and I said you.

‘But I wouldn’t have done that because you were very strong [with Amy] and I wouldn’t want to get in the way of that. But obviously now, you’re single!’ 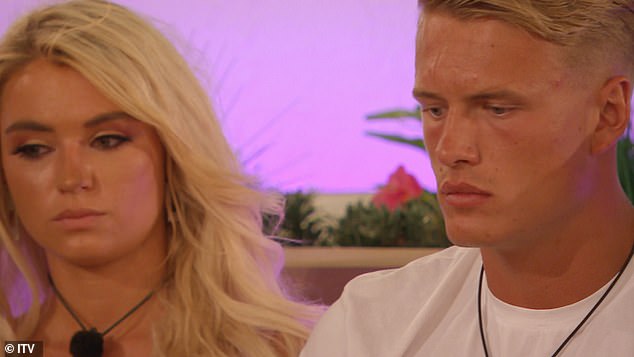 What will happen? Lucie Donlan broke off her budding romance with hunky Essex builder George Rains on Sunday’s episode 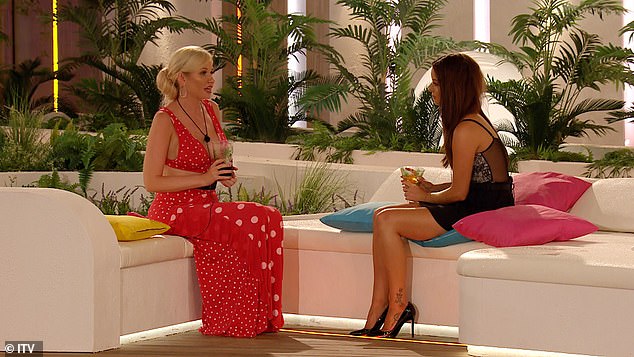 Eek! Elsewhere in the episode, it appears Amy confronts Maura after the ring girl revealed she has feeling for Curtis 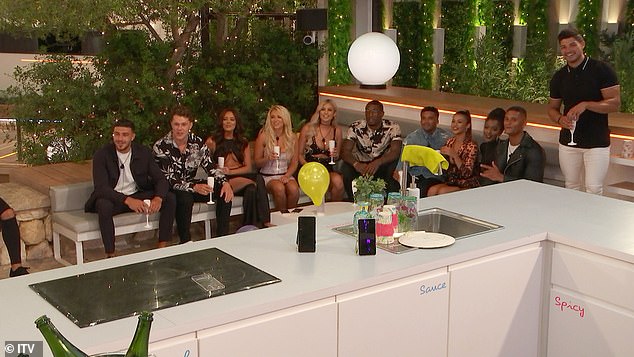 How sweet: Proving he’s every inch the doting partner, Anna’s on-off beau Jordan delivers a sweet speech to his love interest in front of the group for her birthday

‘I just wanted to let you know that I do have feelings for you… you’re in shock aren’t you.’

Maura has put all her eggs in one basket by revealing her feelings to Curtis, after she and Lucie, 21, called time on their respective romances with Marvin Brooks and George Rains.

Basketballer Ovie and Anna are also at risk of being dumped following their split on Sunday’s episode, which saw the bombshell ran back into the arms of Jordan.

Love Island continues on Monday at 9pm on ITV2.