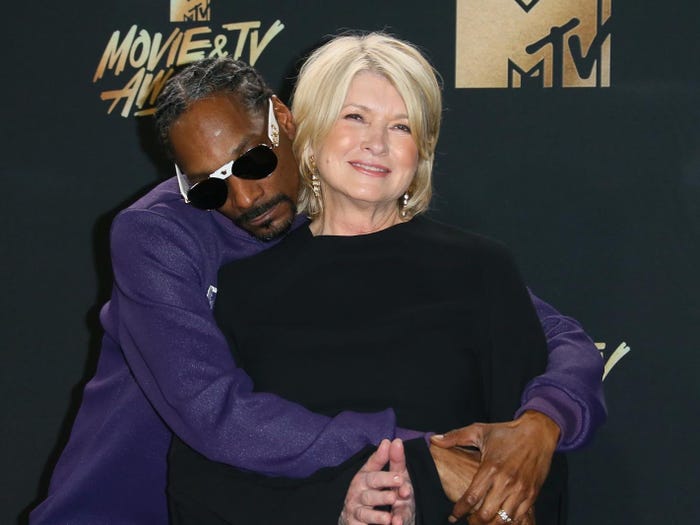 Martha Stewart might be the queen of lifestyle, food, and sultry poolside selfies but she says she still has a thing or two to learn from her famous friend Snoop Dogg.

"I learn a lot from my friend Snoop [Dogg], just about his whole world. Rap had always interested me," Stewart told People magazine's Ana Calderone.

The celebrity chef's friendship with Snoop solidified her status as a fan of rap, calling it "poetry" that "really resonates with [her]."

The two first met on "The Martha Stewart Show" in 2008, MacKenzie Jean Phillipe wrote for Oprah magazine. Snoop went back for another appearance a year later, during which he taught Stewart how to make brownies.

In the 12-year long friendship that has followed, the two have spoofed famous movies together and publicly roasted Justin Bieber on Comedy Central.

Looks like they're still close friends, considering the rapper tuned into Stewart's Instagram live earlier this week and commented "Hi Martha I miss you." Stewart then posted a screenshot of his comment to her feed.

Stewart told People that Snoop's genre of music "resonates" with her and she "listen[s] to the words," some of which "might be pretty hard to take."

She shared that she invited a number of rap artists like P. Diddy, Usher, and of course, Snoop, on her show. The only person who declined her invitation, Stewart revealed, was Eminem — and she thinks it's "just ridiculous" that she hasn't met the Oscar-winning "Lose Yourself" rapper yet.