‘I like to be spontaneous’: Megan Barton Hanson reveals she and ex Love Island beau Wes Nelson DID have sex in the toilets at Southend Airport

Megan Barton Hanson has said that she and Wes Nelson did have sex in the toilets at Southend Airport.

The Love Island star, 26, who met her ex beau on the show, raised some eyebrows back in August 2018 when the former couple were seen slipping into the disabled loos.

Now Megan has confirmed they were caught as she recommended ‘going beyond the bedroom’ as it can be ‘thrilling’ while offering sex tips to partners in The Sun. 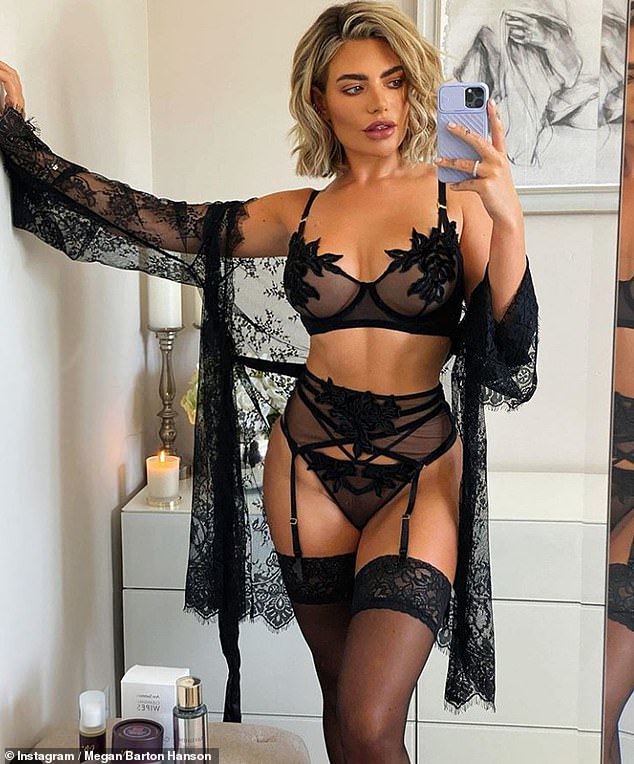 Revelations: Megan Barton Hanson has revealed that she and Wes Nelson did have sex in the toilets at Southend Airport in her latest sex tips column

Writing with advice to boyfriends and partners on how to please women, Megan suggested that mixing up the routine and location can add an extra thrill.

She wrote: ‘Go beyond the bedroom. I might not suggest Southend Airport’s toilets where Love Island’s Wes Nelson and I got caught, but even a different room in the house can be thrilling.’

Megan appeared to be referring to when she and Wes were spotted going into the toilets and then reappearing separately 13 minutes later in August 2018.

With their flight to Glasgow postponed for three hours, it seemed as if Megan and Wes found themselves with time to kill. 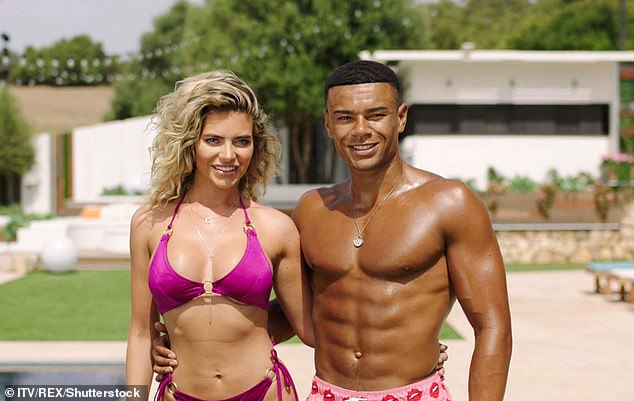 Cheeky: Megan told readers: ‘Go beyond the bedroom. I might not suggest Southend Airport’s toilets where Love Island’s Wes Nelson and I got caught, but even a different room in the house can be thrilling’ (pictured in the villa in 2018)

A source at the time told The Sun that the now former couple ‘looked quite happy when they came out’ and their exit seemed like a ‘coordinated plan’.

MailOnline has contacted a representative for Wes Nelson to ask for a comment.

Megan’s other recommendations for ‘maintaining the heat’ during lockdown and if Covid-19 was keeping a couple apart included sending naughty texts.

The star, who said she ‘likes to be spontaneous’, explained how sending a ‘racy’ clip can be ‘thrilling’ but had her own advice for men thinking about pressing send.

She said: ‘Don’t just send a picture of your willy… we appreciate the full package. Do a video or picture when you are straight out the shower. There’s nothing sexier’. 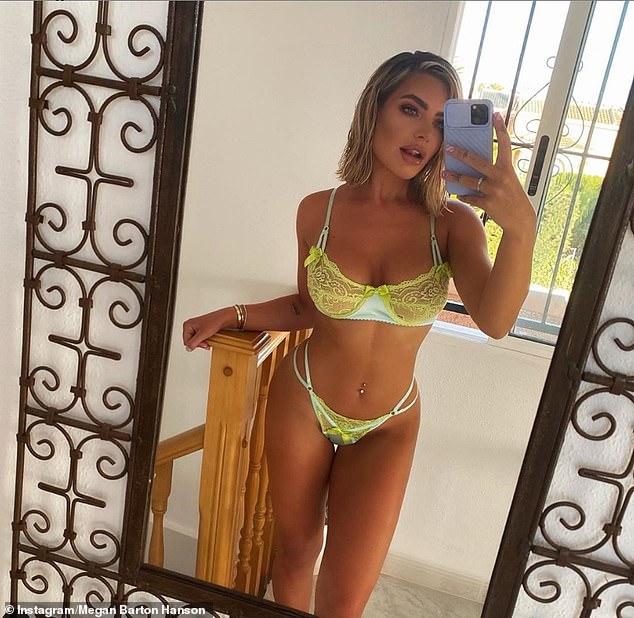 Keeping the spark: Megan also recommended  lovers send ‘racy’ texts and pictures to ensure they maintain a spark during lockdown

However the beauty did admit she struggles with giving out compliments herself and that she often only remembers to do so while in bed.

She added: ‘Keep those fires burning. Do it [give compliments] when they least expect it – such as stacking the dishwasher or getting dressed.’

These compliments can be important, Megan explained, as she believes sex for women is more about being ‘turned on mentally’ than physically.

Megan also revealed some of her own turn offs, saying she can’t stand it when a partner overthinks their moves in the bedroom.

Giving an example from her own experiences, Megan explained that one of her former partners would constantly be questioning how to do things. 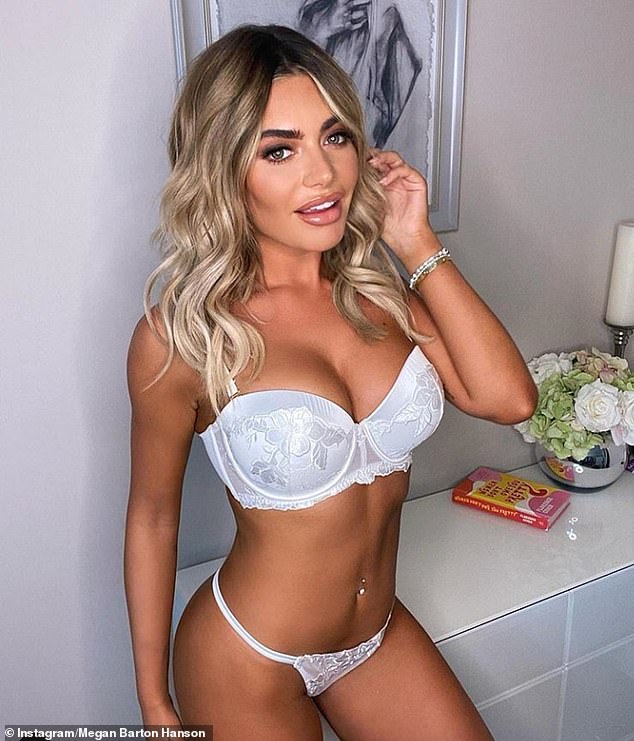 Important: The Anne Summers ambassador also stressed the importance of giving out compliments

The beauty said the former girlfriend acted as if she had expected Megan to have a ‘lesbian How To guide’.

It comes as Megan revealed she lost her virginity after getting permission from her mother, who she has always been comfortable speaking to about sex.

Speaking to The Sun, Megan recalled how she specifically asked her mum if it was OK for her to ‘do stuff’, who said it was but only after she turned 16.

Megan lost her virginity to a boy she was with at her friend’s house and said they both kept most of their clothes on and there was no foreplay or kissing.

Following this brief romance, Megan revealed she had her first serious boyfriend in college and experienced her first orgasm in this relationship.

The star soon discovered what she liked and didn’t like in the bedroom and admitted she grew comfortable taking charge. 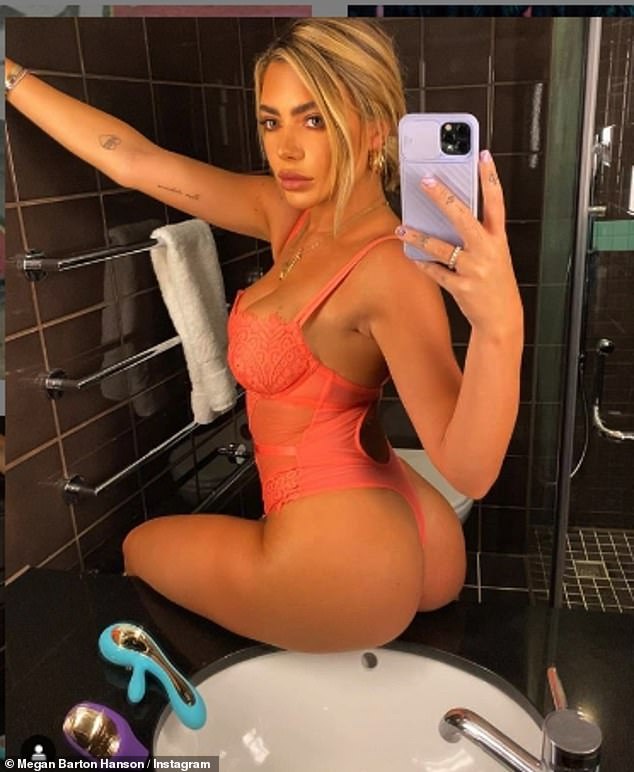 Honest: This comes as Megan Barton Hanson revealed she lost her virginity after getting permission from her mother, but only after she turned 16