Meghan Markle’s family apparently can’t get enough attention. Thomas Markle Sr., Samantha Markle, and Thomas Markle Jr. have been causing media chaos for the royal family, seemingly out of spite and spite alone. And Meghan Markle’s family’s latest comments about the Duchess of Sussex and the royal family reportedly have the palace in a crisis of not knowing how to put a lid on the whole thing. Aides to the family are saying that Meghan meeting with her father might not even do the trick now — the Markles know how to capitalize on Meghan now and they’re not afraid to do it. Elite Daily reached out to Kensington Palace for comment on the reports, but did not hear back by the time of publication. It really makes you feel horribly for the duchess because her family’s actions are just… the worst.

Daily Mail royal reporter Richard Kay says the damage to Meghan and her father’s relationship might be too far gone at this point to repair, aka Thomas’ ego is bruised and he wants revenge! Ugh. This whole saga is so exhausting, and I’m not even in the same country as Meghan Markle. A source told Daily Mail that "turning up on her father’s doorstep" might be the only thing that gets the out of control Markle in control, though the source notes "even that might not work now."

An aide who reportedly worked on Prince William and Kate Middleton’s wedding said that the family’s plan to basically try and ignore Thomas was "inept," adding, 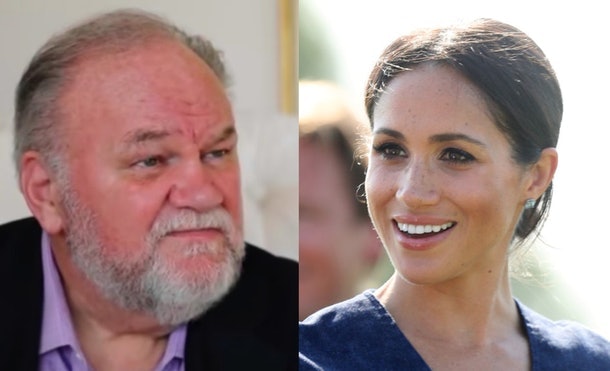 I’m sorry, but it shouldn’t be that hard to figure out that the royal family, whose hallmark trait is being private about the goings on of its personal life, wouldn’t want members of Meghan’s family speaking to the press a lot. But maybe the Markles knew that speaking to the press a lot would really get under their skin (or, dare I say, line their pockets), so they did it anyway. Sigh.

The aide added that the royals should have invited all of Meghan’s family to the wedding. "The Palace should have invited the whole Markle family," they said. "They wouldn’t all have come and it would have made them feel included and less likely to make the negative comments they have been making." If the Markles are this ready to disparage their sister in the press, I can’t imagine that their relationship was that great to begin with, so I don’t think Meghan was in any way obligated to invite them all to her wedding. This really just puts the blame on Meghan for the actions of other people instead of holding those people accountable for being unreasonable and saying horrible things about her in interviews.

One source told Daily Mail that the royal family apparently had a PR rep lined up to be the line of communication between Meghan and Harry and Thomas Markle, but they put an end to that plan once they learned the rep was once a journalist. Harry doesn’t trust the media, so he apparently didn’t want a former journalist involved in the talks between his family and Meghan’s dad. "Frankly they should have been prepared to try anything by that stage," the source said. "The trouble stemmed from well before the wedding when there must have been an opportunity for Harry and Meghan to pay a private visit to her father. This was long before he started giving interviews." Again, it’s not on Harry and Meghan to make sure Thomas Markle doesn’t say sh*tty things. It’s on Thomas Markle to not say sh*tty things.

But the family continues to say sh*tty things about Meghan. In another new interview, Meghan’s half-brother, Thomas Markle Jr., laid into his half-sister over what he feels is her mistreatment of their father.

"Throughout our lives, dad always put Meg first, above me and my sister," he said in an interview with The Mirror. "But if what he is saying is true it appears she is abusing his love for her." He added, "It’s selfish, cruel even. He gave her everything and now she is giving him nothing but hurt back."

Elite Daily reached out to the Palace regarding Thomas Markle Jr.’s comments, but did not hear back by the time of publication.

Of course, Samantha Markle has some things to say as well, and as usual, they weren’t kind. On Aug. 12, Markle reportedly tweeted a bunch of nasty tweets about her sister and the royal family. In one tweet, she said, "They are angry and twisted souls. They are not Christians holes [SIC] and none of this monkey business has been Christian behavior. Christ would not isolate or reject or insult. He would include and embrace. The sermon on wedding day fell on deaf ears. Hypocrites." Nothing says good Christian behavior like disparaging your family on Twitter!

She said in another tweet, "The Queen’s church? You call yourself Christians? Christ would never treat our family as you have. Shame on you heartless things." And what’s a good Twitter rant without calling your sister an inhumane sociopath? Markle’s last tweet said,

For someone whose Twitter location says "Far away from the paparazzi," Samantha Markle sure as hell seems to loves to drag her family drama into the spotlight. I don’t blame the royal family for feeling like they’re in a serious media crisis.