‘I hated the old me but now I love how I feel’: Michelle Mone details the secrets to her incredible 8 STONE weight loss… and admits she treats her body ‘like a business’

Posting a before and after snap, the entrepreneur, 48, was radiant in both a backdated, curvier image in a pink gown and a current, svelte snap.

Admitting she was once advised to ‘treat her body like a business’, she divulged the finer details of her weight loss ahead of her pending wedding to Doug Barrowman, who she became engaged to in 2018. 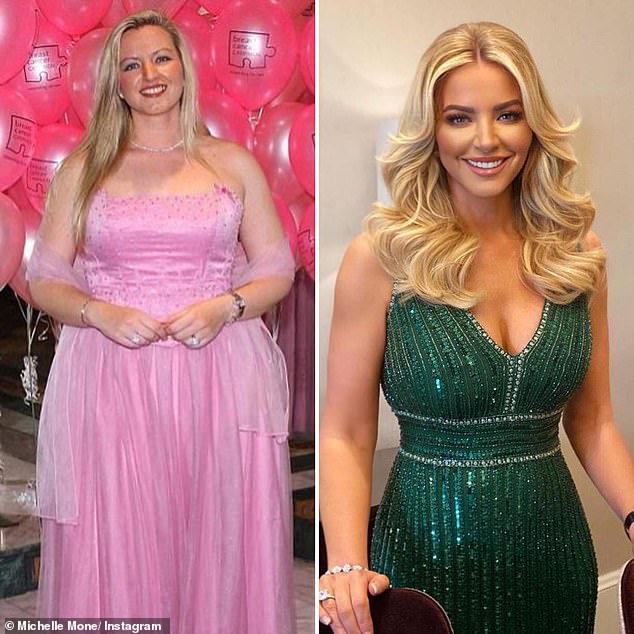 That was then: Michelle Mone has shared details of her incredible eight stone weight loss by sharing a striking before and after snap on Friday

Michelle has been dating her billionaire fiancé Doug for just over two years and the pair got engaged in December 2018. She has now revealed that she is nearing the end of her pre-wedding diet ahead of the big day.

She previously admitted that it’s taken her seven years to reach her goal and explaining how she shed the pounds.

In her lengthy caption on the post, she wrote: ‘I just wanted to share with you guys how far I have come… in the final weeks before my wedding I have really stepped up my game to get the body and mindset that I want…

‘Yes it takes time, yes it takes determination, but like anything if you put your mind to it you can get results. This post is not a sales pitch just me being real and completely honest with you guys… 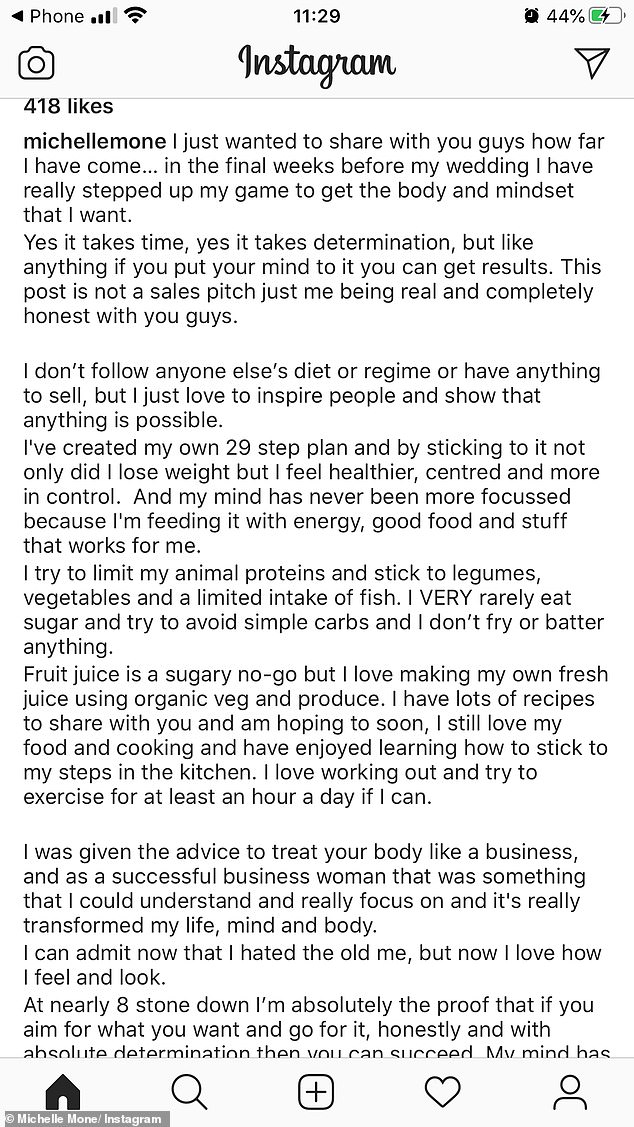 Happy days: Admitting she was once advised to ‘treat her body like a business’, she divulged the finer details of her weight loss ahead of her pending wedding to Doug Barrowman, who she became engaged to in 2018

‘I don’t follow anyone else’s diet or regime or have anything to sell, but I just love to inspire people and show that anything is possible…

‘I’ve created my own 29 step plan and by sticking to it not only did I lose weight but I feel healthier, centred and more in control. And my mind has never been more focused because I’m feeding it with energy, good food and stuff that works for me…

‘I try to limit my animal proteins and stick to legumes, vegetables and a limited intake of fish. I VERY rarely eat sugar and try to avoid simple carbs and I don’t fry or batter anything…

‘Fruit juice is a sugary no-go but I love making my own fresh juice using organic veg and produce. I have lots of recipes to share with you and am hoping to soon, I still love my food and cooking and have enjoyed learning how to stick to my steps in the kitchen. I love working out and try to exercise for at least an hour a day if I can… 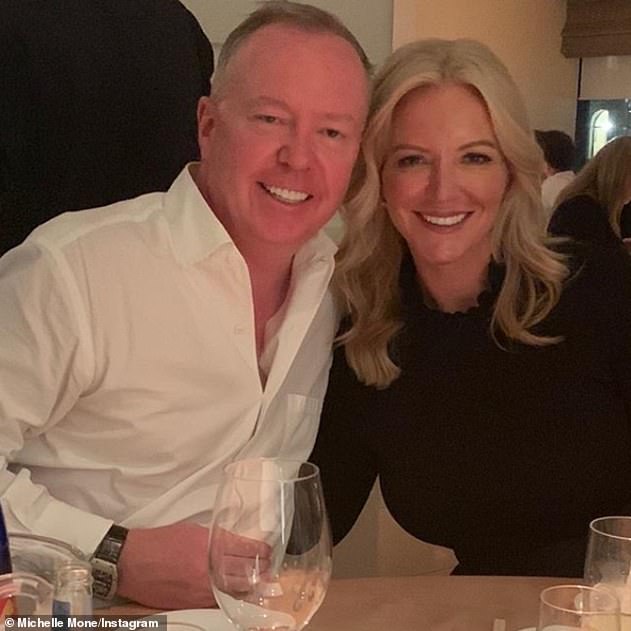 Her love: Michelle has been dating her billionaire fiancé Doug for just over two years and the pair got engaged in December 2018. She has now revealed that she is nearing the end of her pre-wedding diet ahead of the big day (pictured in February last year)

‘I was given the advice to treat your body like a business, and as a successful business woman that was something that I could understand and really focus on and it’s really transformed my life, mind and body…

‘I can admit now that at nearly 8 stone down I’m absolutely the proof that if you aim for what you want and go for it, honestly and with absolute determination then you can succeed…

‘My mind has never been so focused and it’s all down to feeding my brain with healthy energy and happiness! I hope this helps to inspire you to be the best version of you too, please make sure you tag me in your before and after pics.’

In the past Lady Mone has had a constant battle with her weight. In September 2016 she admitted posing for naked selfies to motivate her to lose the pounds. 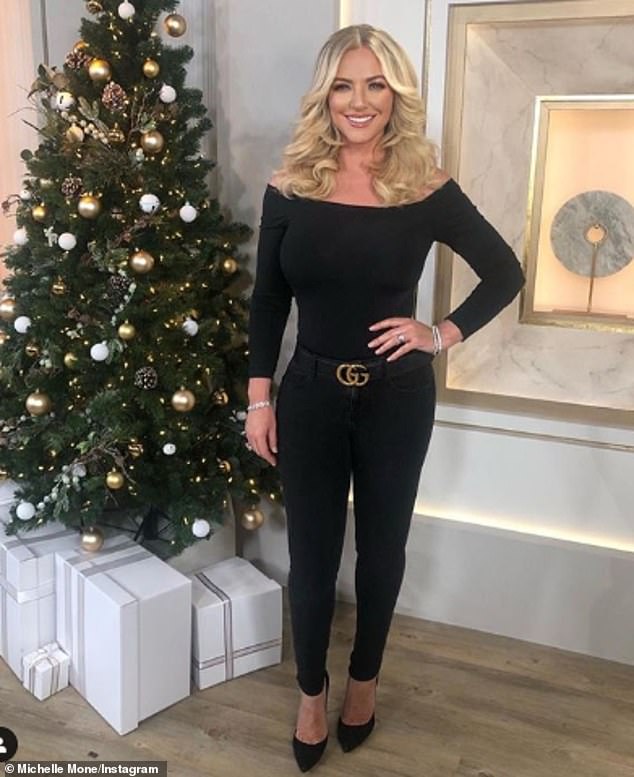 In February 2015, Michelle candidly revealed to MailOnline how she previously ballooned to a size 22, and at one point weighed in at almost 18 stone.

She explained how that in 2002 she worked herself to the point of exhaustion to save her company, working late and getting up at 4.30am before getting her children ready for school.

She admitted: ‘To cope with the stress and exhaustion, I began binge eating. At my worst, I was putting away four McDonald’s a day, 13 bags of crisps and bowls of chips, and 15 cans of fizzy drink.

‘I’d regularly send my PA out to the Chinese to get me chow mein with chips, eating everything on the plate until I felt I was going to burst. Even as I was designing lingerie to help other women feel sexy and good about themselves, I ballooned from a size ten to a size 22. 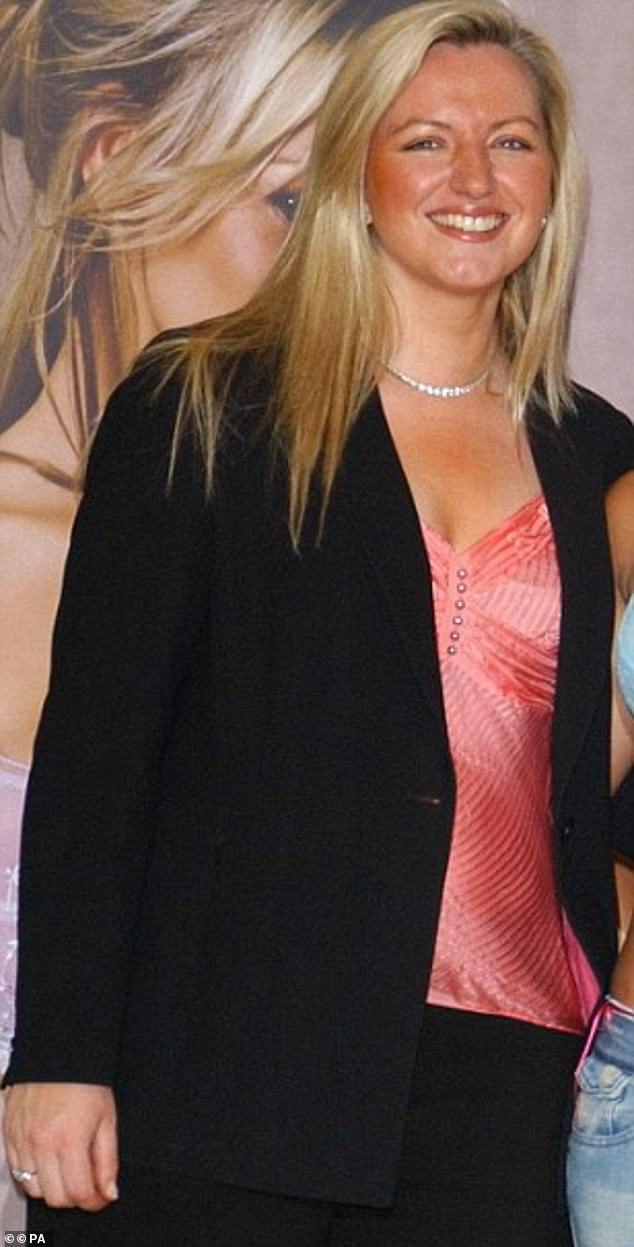 Her former self: In February 2015, Michelle candidly revealed to MailOnline how she previously ballooned after binge eating to cope with stress and exhaustion

‘My trousers had elasticated waistbands and my backside became so big I couldn’t fit into the pants I designed, buying them instead from Marks & Spencer. When I see photos from that time, I don’t recognise myself. My eyes are sunk into a fat face, so swollen it looks as if someone had pumped me up like a tyre.

‘I’d hide doughnuts under the towels in the linen cupboard and stash sweets in my wardrobe.’

Lady Mone split from her husband Michael Mone, with whom she has three children, in 2011 after 19 years of marriage.

Taking advantage of a privilege available only to peers, MPs and their families, Baroness Mone has chosen to tie the knot with her businessman fiancé, 53, later this year in the 13th century Chapel of St Mary Undercroft in the heart of the Palace of Westminster, otherwise known as ‘the House of Lords church’.

Michelle has also revealed that, after the wedding ceremony, she and her new husband will host a party at the luxurious Corinthia Hotel, taking over the entire 5 star hotel for the weekend to celebrate with their family and friends.