EXCLUSIVE: Miley Cyrus glams it up in leggy black gold dress as she shoots music video with tuxedo-clad Pete Davidson in Hollywood… ahead their upcoming New Year’s Eve special

They’ll be ringing in 2022 together as part of a live special in Miami later this month.

But Miley Cyrus and Pete Davidson joined forces a few weeks early as they filmed a music video in Hollywood on Tuesday.

The shoot appeared to be connected to their upcoming special, as both Miley, 29, and Pete, 28, were already dressed in their New Year’s Eve best.

There was no missing the celebrities as they made their way out of the The North End bar, decked out in style from head-to-toe.

Miley was a vision in a halter black gold dress with fringe tassels that dangled over her long, toned legs.

She wore her platinum blonde hair down with her bangs skimming over her blue eyes, accented with a touch of winged eyeliner. Bright, fire engine red lipstick finished off the glam makeup.

With winter approaching and temperatures dropping in Los Angeles, the beauty braved the cold with her arms hugging her body. 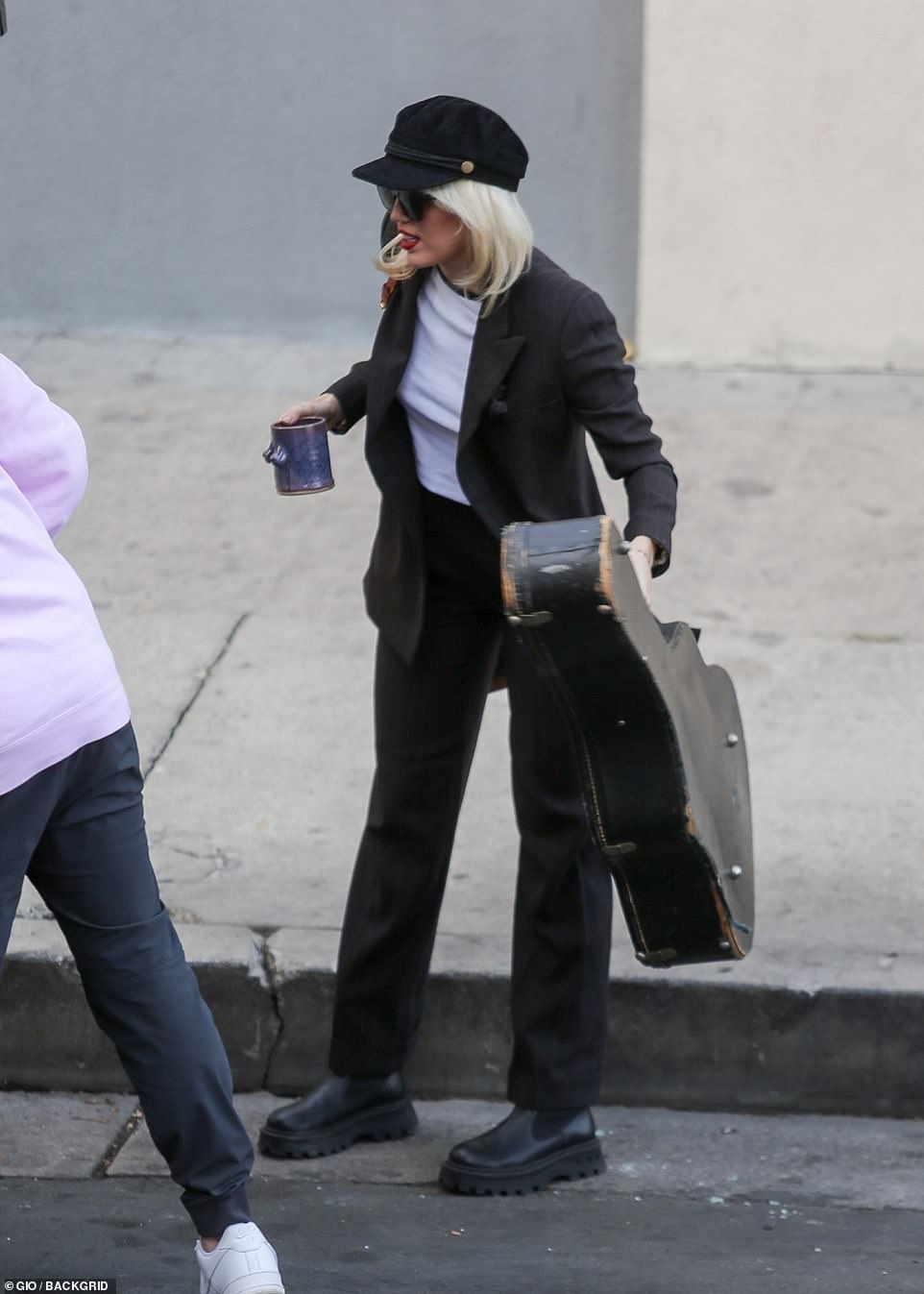 Music maker! Cyrus arrived wearing a messenger cap and her hands full with a guitar case and mug

Costume change! After arriving in her stylish yet more casual look, the star changed into a stunning gold frock which showcased some leg

Contrasting with his usual dressed down style, Pete was looking his absolute best in a black Giorgio Armani tuxedo and glossy loafers.

The Saturday Night Live star, who is currently dating Kim Kardashian, was spotted taking frequent smoke breaks. In between puffs of his cigarette, he checked out his phone.

In true Pete fashion, however, The King Of Staten Island star at one point wore a pair of grey sweatpants and slippers with his black tuxedo blazer. 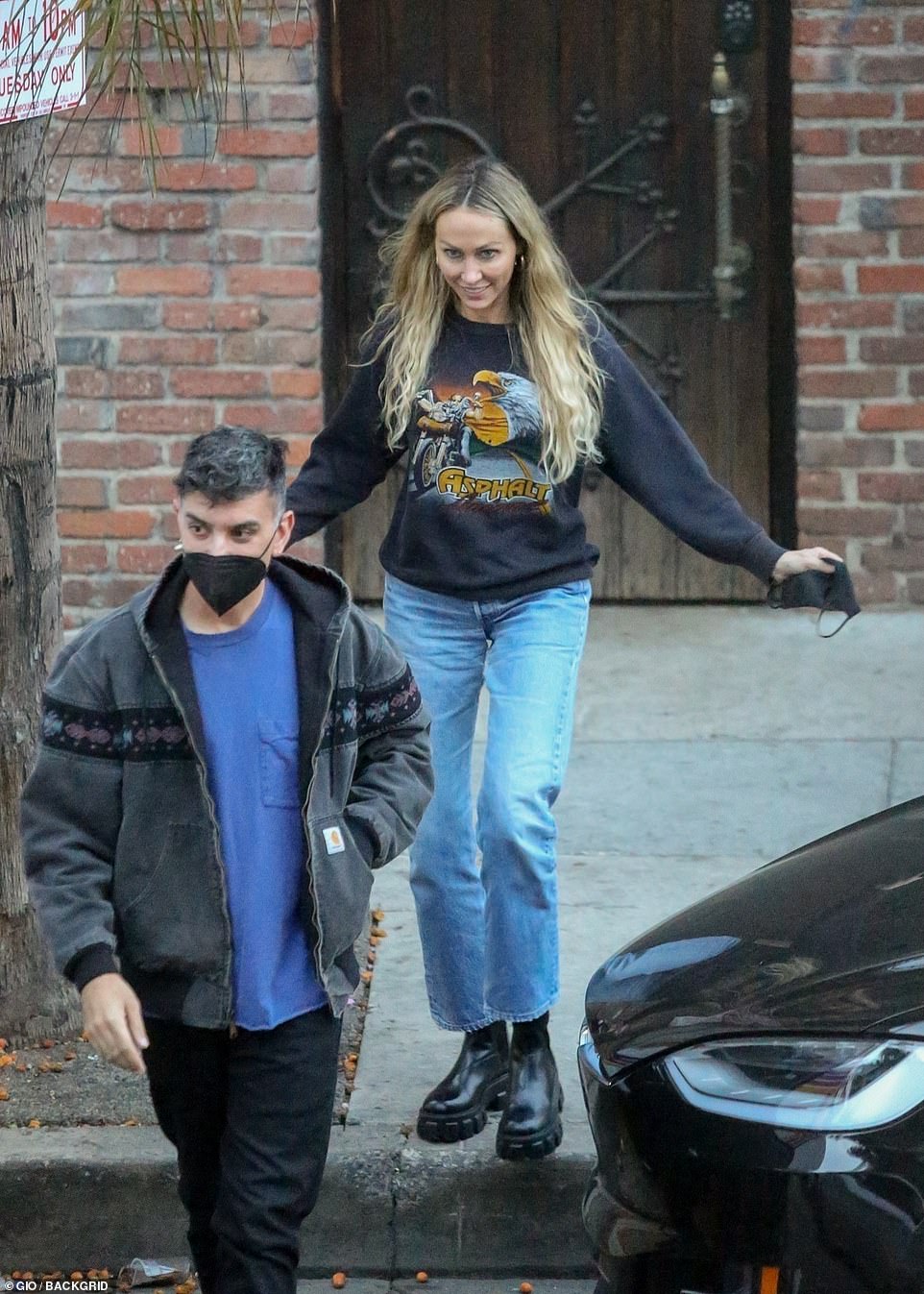 Look who’s here! Cyrus’ mother Tish Cyrus was spotted supporting her daughter on the set of the music video 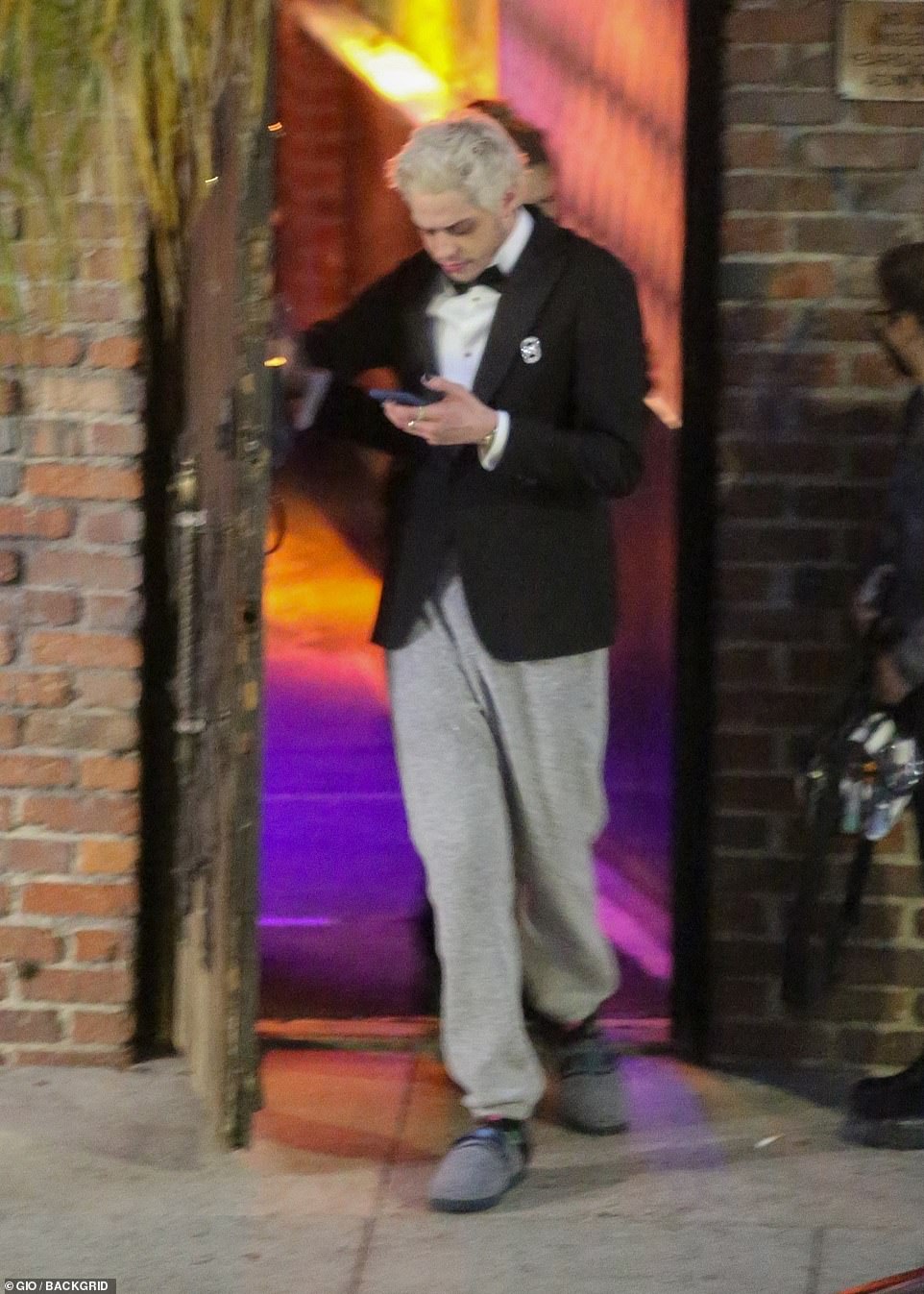 Taking five: In true Pete fashion, the comedian at one point paired his tuxedo blazer with sweats

Miley was also seen a little more dressed down, though still a vision of style as she arrived with a black messenger hat propped over her blonde hair.

The beauty wore a black blazer, trousers, chunky sneakers, and carried a mug and guitar case.

The celebs were scheduled to shoot the video from 7AM to 10PM, however both arrived at around 5PM and were on set for about three hours.

He’s smoking! Davidson stepped out for a smoke and cell phone break 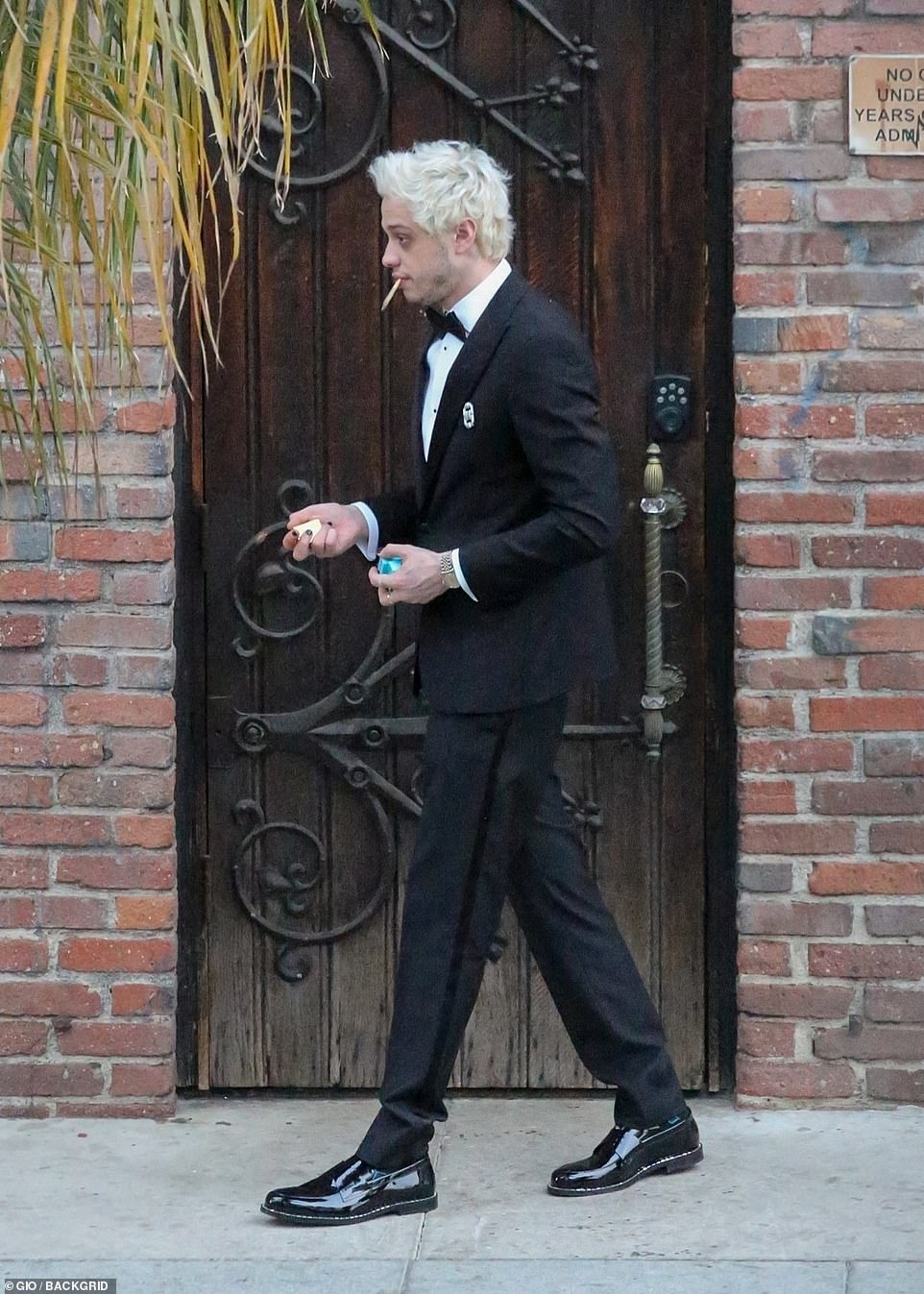 Joining forces! It was announced last month that Miley and Pete would be co-hosting Miley’s New Year’s Eve Party in Miami later this month

The actress wore an Eagle and motorcycle print sweatshirt, jeans, and chunky boots.

It was announced last month that Miley and Pete would be co-hosting Miley’s New Year’s Eve Party in Miami later this month.

NBC announced that a number of stars will join the Davidson and Cyrus for the event though they haven’t released a list of the guests yet.

Jen Neal, the executive vice president, live events, specials, and E! News, NBC Universal said, ‘In what is sure to be an exciting and fun evening, we are looking forward to partnering with Lorne Michaels and ringing in 2022 with a night of incredible entertainment, led by Miley and Pete.’

The new program will replace NBC’s New Year’s Eve special which Carson Daly hosted and produced from 2004 until last year.

The two stars will have to compete with several well-established New Year’s Eve programs like Dick Clark’s New Year’s Rockin’ Eve With Ryan Seacrest which beat even the Academy Awards in this year’s ratings. 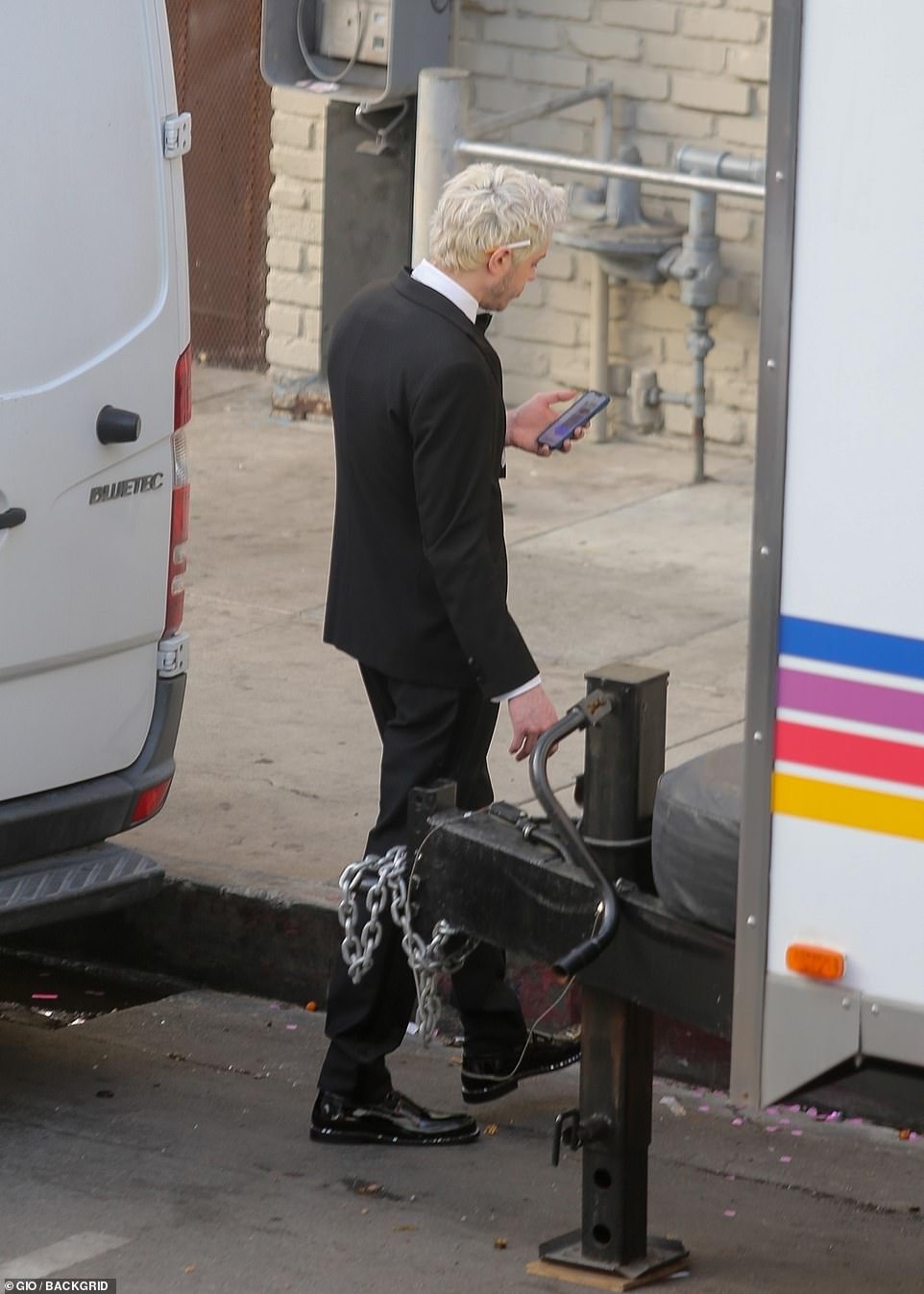 Who are you talking to? The Saturday Night Live star, who is currently dating Kim Kardashian, stepped outside to take a smoke break, where he scrolled through his phone in between puffs of his cigarette