Watch out, Miley… you’re about to face Hollywood’s Divorce Queen! Liam Hemsworth hires $850-an-HOUR attorney Laura Wasser to represent him in marriage split – and her client list includes everyone from Kim Kardashian to Britney Spears

The Australian actor, 29, filed for divorce on Wednesday, just 11 days after the couple announced their split, and is now being represented by attorney Laura Wasser.

Ms Wasser has quite a fierce reputation in Hollywood, where she has represented the likes of Kim Kardashian in her divorce from Kris Humphries, and charges exorbitant fees for her services. 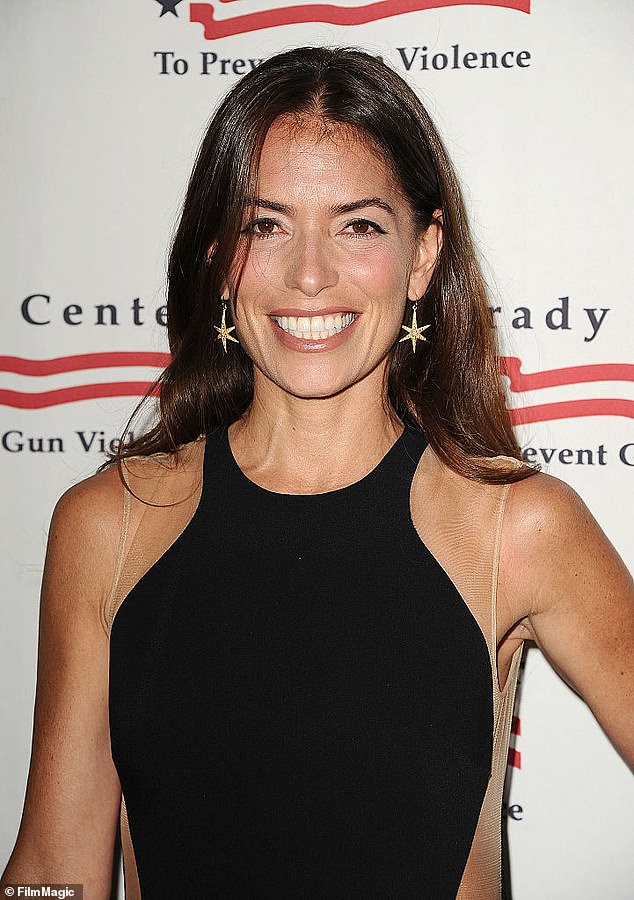 Watch out, Miley… you’re about to face Hollywood’s Divorce Queen! Liam Hemsworth has hired $850-an-HOUR attorney Laura Wasser (pictured) to represent him in his marriage split

She is a partner at Wasser, Cooperman & Mandles, a Los Angeles-based family law firm founded her father Dennis Wasser in 1976 that provides services for the rich and famous.

According to Bloomberg, she ‘charges $850 an hour, requires a $25,000 retainer, and rarely represents people who have less than $10million.’ 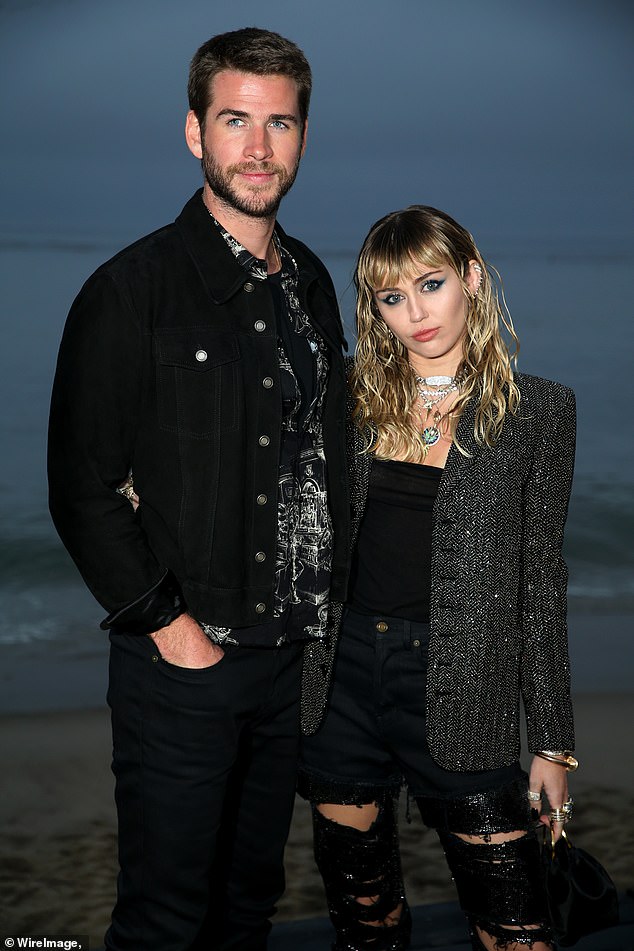 Done and dusted: The Australian actor filed for divorce on Wednesday, just 11 days after the couple announced their split. Pictured: Miley and Liam in Malibu, California on June 6, 2019 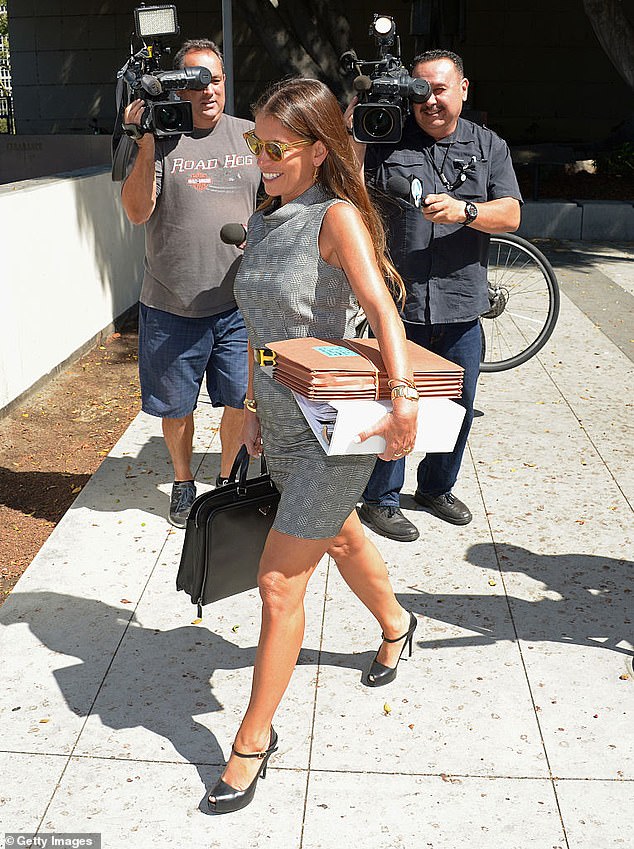 Queen of the courtroom: Ms Wasser has quite a fierce reputation in Hollywood, where she has represented the likes of Kim Kardashian, and charges exorbitant fees for her services. Pictured on August 9, 2016 in Los Angeles while representing actor Johnny Depp 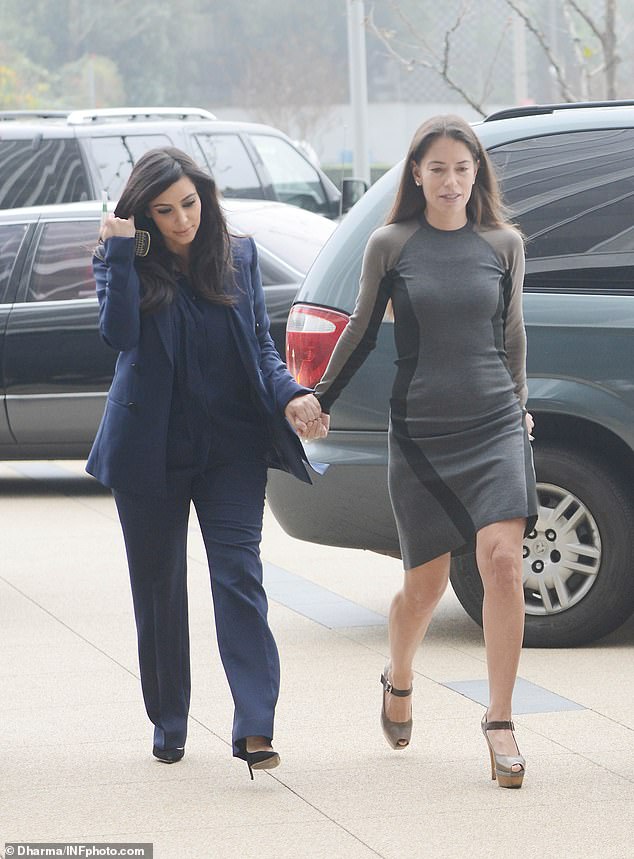 High-profile clients: Laura reportedly ‘requires a $25,000 retainer and rarely represents people who have less than $10million’. Pictured with Kim Kardashian (left) in Los Angeles on February 5, 2013 amid the star’s divorce from Kris Humphries

While dozens of major stars have been willing to pay these fees, Alec Baldwin famously said no to working with Ms Wasser because he ‘doesn’t have the money’.

She is known for her strong work ethic, with The Independent reporting in March 2016 that she was ‘working on around 45 cases’ at the time.

While representing multiple high-profile clients at once, she advises them to file for divorce at the ‘same time so the media interest will be divided between a number of cases.’ 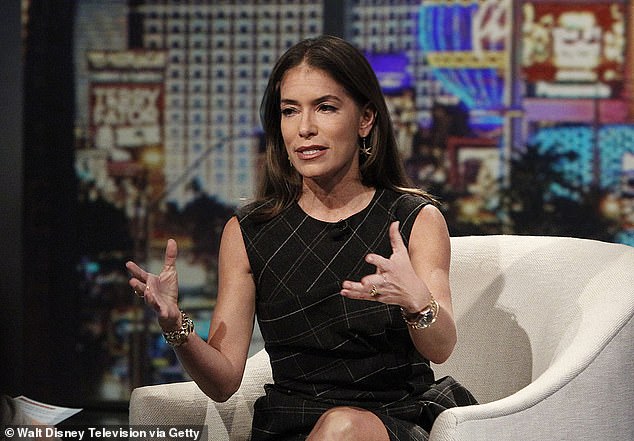 Nickname: Gossip website TMZ has nicknamed Ms Wasser the Disso Queen, ‘disso’ being American slang for ‘marriage dissolution’. Pictured during an appearance on The View in 2013

Despite her ‘tough’ reputation, Ms Wasser says she won’t represent anyone who simply wants to ‘ruin their ex-partner’s life’.

She told Dame magazine in 2012: ‘If a client wants to go public with things that I think are detrimental to the whole family. I’ll say, “I get it, it’s strategic, but in the long run, your kids can read [the news], and it’s not going to help you.”

‘I don’t feel comfortable when the desire to ruin the other person is so great.’ 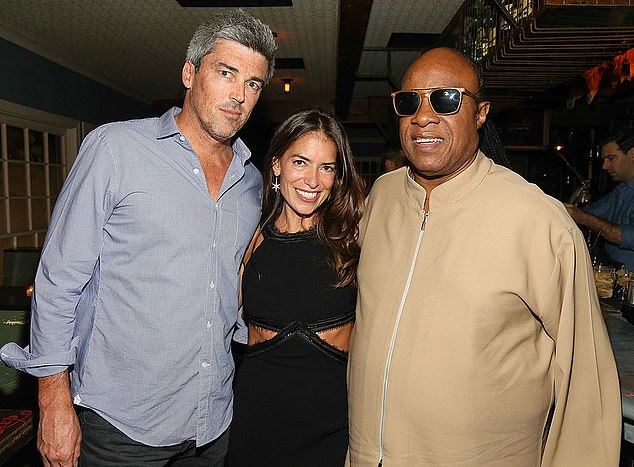 Liam is being represented by Ms Wasser in his divorce from Miley, but the legal eagle did not state a date of separation on the petition, simply putting ‘TBD’.

A source told TMZ that Liam just wants to move on and is ‘over the marriage’.

The couple had a prenup so their individual earnings during the marriage will remain separate and there is no request for spousal support.

As the pair don’t have children together, the divorce should be finalised fairly swiftly. 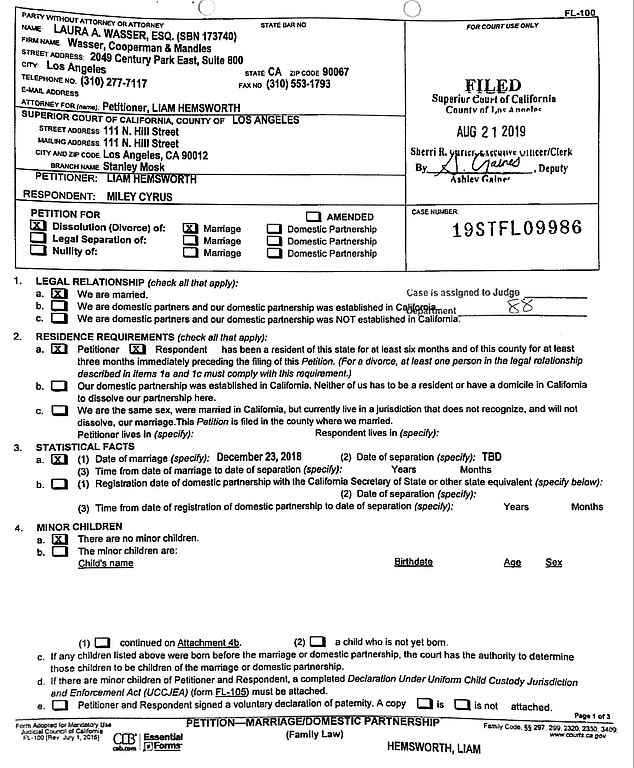 Legal documents: Liam’s divorce petition, filed by Ms Wasser on Wednesday, states the date of marriage as December 23, 2018 and the date of separation as ‘TBD’ 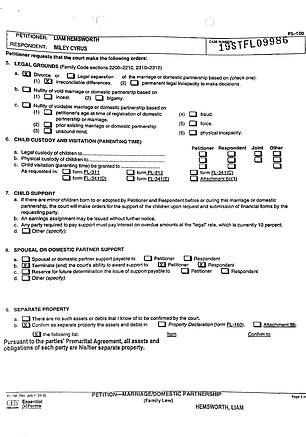 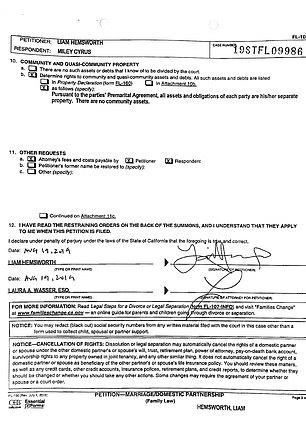 Straightforward: The couple had a prenup so their individual earnings during the marriage will remain separate and there is no request for spousal support 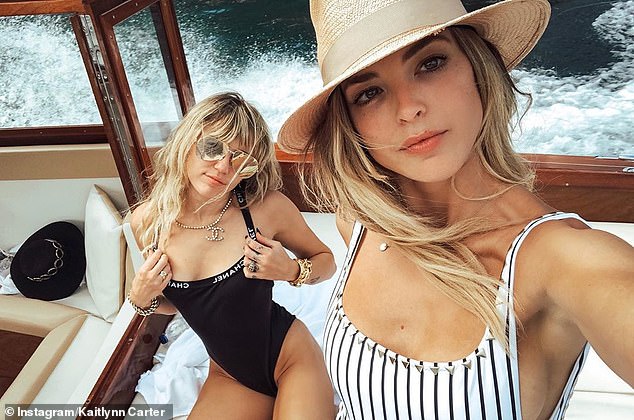 Girlfriends: One day before confirming the separation on August 10, Miley (left) was pictured kissing Brody Jenner’s ex-partner Kaitlynn Carter (right) during a girls’ trip to Italy. Sources close to the singer deny she was ever unfaithful to Liam during their marriage

One day before confirming the separation on August 10, Miley was pictured kissing Brody Jenner’s ex-partner Kaitlynn Carter during a girls’ trip to Italy.

It wasn’t long before accusations of ‘infidelity’ and ‘out-of-control partying’ emerged from both sides amid speculation the couple had actually split ‘months ago’.

Days after the split announcement, sources close to Miley told TMZ she had tried ‘valiantly’ to save her marriage but could not accept Liam’s ‘drinking’ and alleged use of ‘certain drugs’. 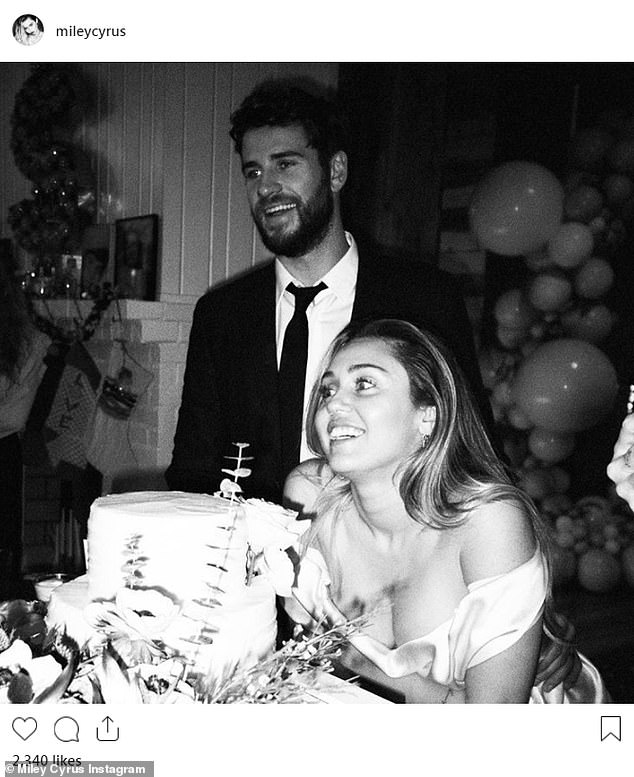 It’s over! Miley and Liam married last December in her native Tennessee after an on-again-off-again romance that began when they co-starred in the 2010 movie The Last Song

Sources on Liam’s side strongly denied Miley’s accusations, however, and said the real issue was the former Disney star’s ‘infidelity’.

‘This is another attempt by Miley to distract from her infidelity and recent outrageous public behaviour,’ Liam’s source told TMZ.

Friends of the Hunger Games star added that Miley was using the drug and alcohol accusations to distract from the real cause of the split: her cheating.

Sources close to Miley denied she ever ‘hooked up with girls while she was married’. 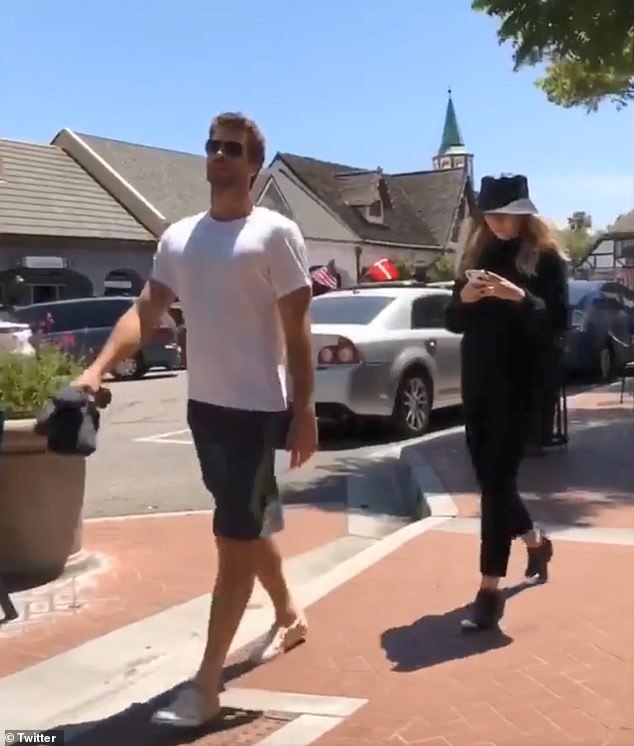 End of the road: While the pair didn’t confirm their break-up until August 10, it’s believed they actually called it quits in several months ago. The last known footage of them together was from July 9 (above) in Solvang, California, but they looked decidedly unhappy

Meanwhile, an insider told People on Tuesday that Miley ‘isn’t trying to hurt’ Liam with the release of her new song Slide Away, which references a relationship breakdown and alludes to alcohol and drug abuse.

‘Her song [Slide Away] was her way of telling her story without having to say anything at all. She isn’t trying to bash him, but she wants to be able to share what she’s been going through,’ said the source.

‘Miley is doing okay. It’s a relief the [break-up] news is out publicly so she can live her life and focus on herself.

‘Miley doesn’t talk about Liam much and is not dwelling in the past. She doesn’t want to hide, and her mood has changed drastically. She seems much more relaxed and happy.’ 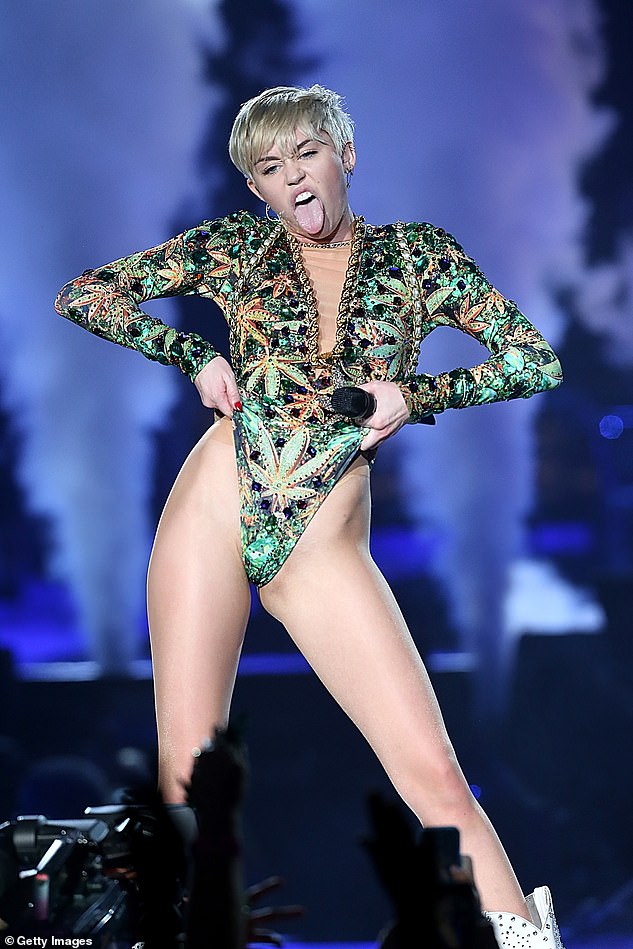 Conflicting values: Sources previously told Page Six that Liam was hoping to have ‘a normal, settled-down life’ but Miley was determined to return to her famously wild ways. Pictured: Miley performing in San Antonio, Texas on March 15, 2014

Sources previously told Page Six that Liam was hoping to have ‘a normal, settled-down life’ but Miley was determined to return to her famously wild ways.

Following the couple’s initial split in 2013, Miley shed her wholesome girl-next-door image, instead opting for sexually provocative outfits and outrageous behaviour, culminating in her notorious appearance at the VMAs with Robin Thicke.

After toning down her antics when they first reunited in 2016, sources claimed that the return to ‘old Miley’ had caused serious issues for Liam.

Miley and Liam married last December in her native Tennessee after an on-again-off-again that began when they co-starred in the 2010 movie The Last Song. 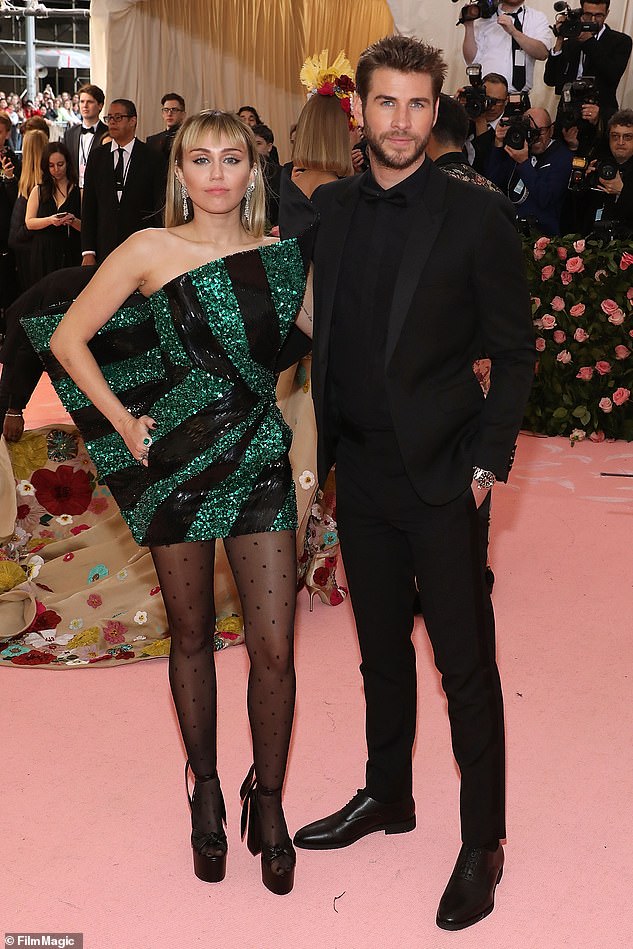 It’s official! Liam cited ‘irreconcilable differences’ in paperwork filed on Wednesday in Los Angeles. Pictured with Miley at the Met Gala in New York City on May 6, 2019

The Wrecking Ball star confirmed the split to People magazine earlier this month, with a spokesperson saying: ‘Liam and Miley have agreed to separate at this time.

‘Ever-evolving, changing as partners and individuals, they have decided this is what’s best while they both focus on themselves and careers.

June 2009: Miley and Liam first met on the set of the movie The Last Song, in which they played romantic interests – foretelling their real-life future.

Young love: Miley and Liam first met on the set of the movie The Last Song (pictured in 2010)

March 2010: Following months of speculation, the lovebirds confirmed their romance in the most Hollywood way possible, by making their red carpet debut as a couple at an Oscars party.

August 2010: After solidifying their status as Hollywood’s coolest young It Couple, the pair reportedly went through their first breakup, with Miley’s exhausting work schedule being cited by sources as the cause.

September 2010: Within weeks of the news that they had gone their separate ways, the pair were spotted out and about together.

November 2010: Fans rooting for the photogenic twosome’s fledgling romance were left disappointed as they decided to split once again.

April 2011: After spending a whole winter apart, it appeared that they came to the realisation they couldn’t live apart, as they reunited in time for spring.

December 2011: Of course, nothing says ‘we’re together and madly in love’ in Hollywood like a red carpet outing. Liam joined Miley at the CNN Heroes Gala in Los Angeles.

March 2012: Shortly after Miley accompanied Liam to the premiere of The Hunger Games, engagement rumours swirled as she was seen sporting a ring. However, the star took to Twitter to shoot down the fevered speculation.

June 2012: What a difference a few months make! The couple announce their engagement after Liam proposes with a 3.5-carat Neil Lane sparkler.

February 2013: There appears to be trouble in paradise once again, as Miley shoots down cheating rumours. Despite her denials, the couple step out separately for high-profile Oscar parties, fuelling breakup speculation.

September 2013: Miley makes the big step of unfollowing Liam on Twitter. Just days later, her spokesperson confirms that the engagement is over. That same month, Liam is seen kissing Mexican beauty Eiza Gonzalez.

November 2014: Miley moves on! She embarks on a romance with Patrick Schwarzenegger, and their every exploit soon starts hitting social media.

March 2015: After Miley is embraced and welcomed into the Schwarzenegger fold, Patrick is seen getting cosy with another woman.

April 2015: It’s announced that the pair’s Instagrammable romance is over.

July 2015: Miley is linked to model Stella Maxwell after they’re seen out together. One month later, Miley shares that she’s pansexual – and single.

January 2016: The singer confirms that she’s back with Liam – and they’re engagement is on again – after she’s seen with moving trucks at his home.

October 2017: Miley and Liam make their first red carpet appearance together in more than four years as they attend the Hollywood premiere of Thor: Ragnarok, starring his brother Chris.

Happier times:  The pair split after seven months of marriage in August 2019

November 2018: The couple lose their Malibu home, after devastating wildfires destroy homes throughout the state of California. They subsequently relocate to Tennessee, where they’re thought to have wed a month later.

December 2018: Miley and Liam marry at their home in Franklin, Tennessee