She is back on the market after splitting from Cody Simpson.

But Miley Cyrus is not letting that stop her from looking good.

The singer, 27, was spotted leaving a photoshoot in Los Angeles on Tuesday, working a pair of PVC trousers and a military-style button down jacket. 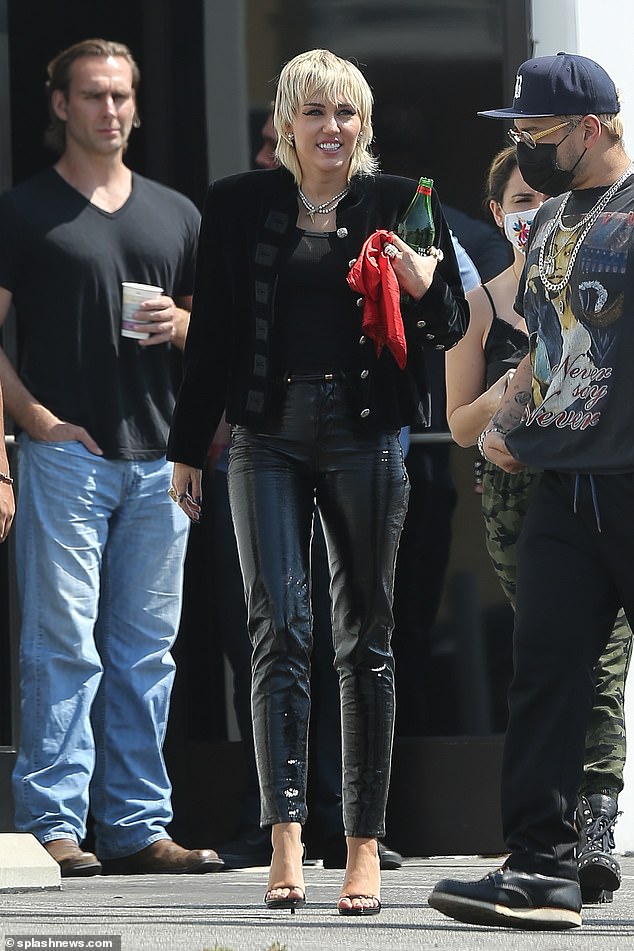 Working it! Miley Cyrus was spotted leaving a photo shoot in Los Angeles on Tuesday, working a pair of PVC trousers and a military-style button down jacket

Miley was glammed up from head-to-toe as she left the warehouse studio alongsde her entourage, few of them wearing masks.

In addition to her attention-getting trousers, Miley wore an edgy silver necklace, strappy high heels, and a dramatic winged slick of eyeliner framing her blue eyes.

With her platinum blonde hair given a textured touch, Miley looked every inch the rock star sauntering out of that studio.

However, with a heatwave in full effect, it didn’t take long for her to ditch her bold jacket. 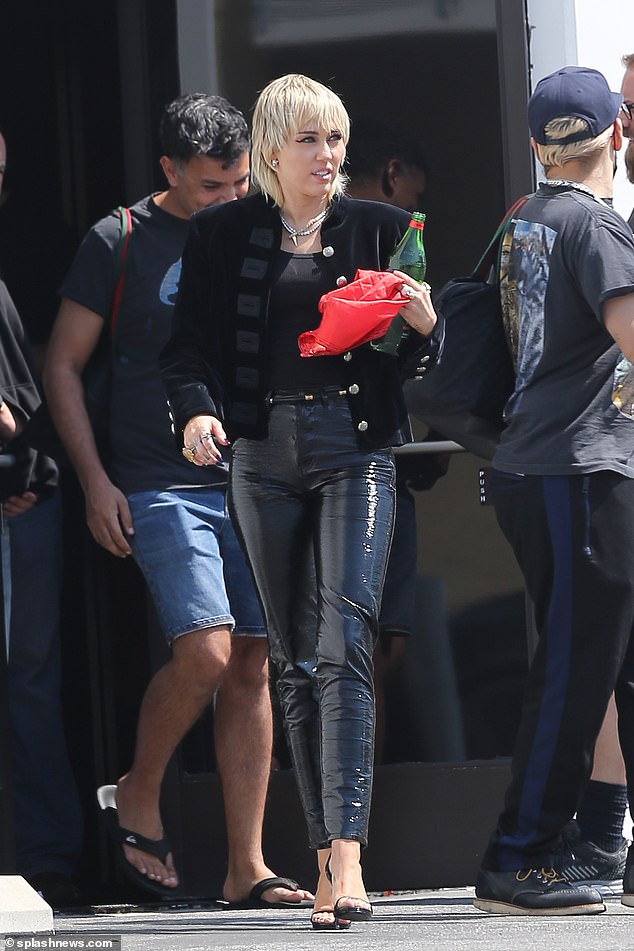 Glammed up: In addition to her attention-getting trousers, Miley wore an edgy silver necklace, strappy high heels, and a dramatic winged slick of eyeliner framing her blue eyes

Happy days: Cyrus was in good spirits as she left the studio with a smile on her face

She carried around the jacket and a bottle of mountain water, which kept her hydrated amid the scorching temperatures.

Miley is back on the market after calling it quits with singer Cody Simpson, whom she began dating in October 2019 following the end of her marriage to Liam Hemsworth.

But the split was an amicable one between the duo, who were already friends prior to their romantic relationship.

Nowadays, Miley is focusing on her music. 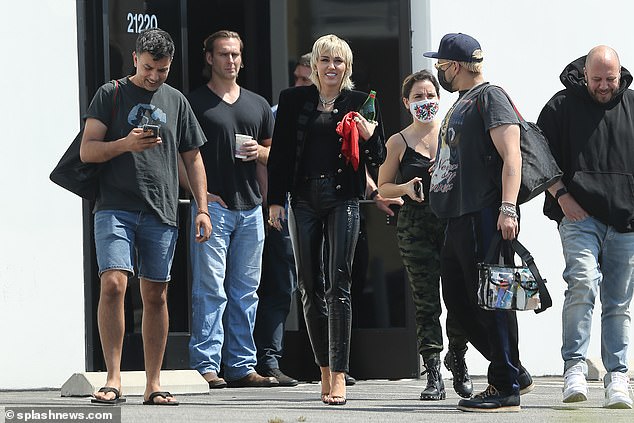 Where are the masks? Only a few people wore masks as they left the studio 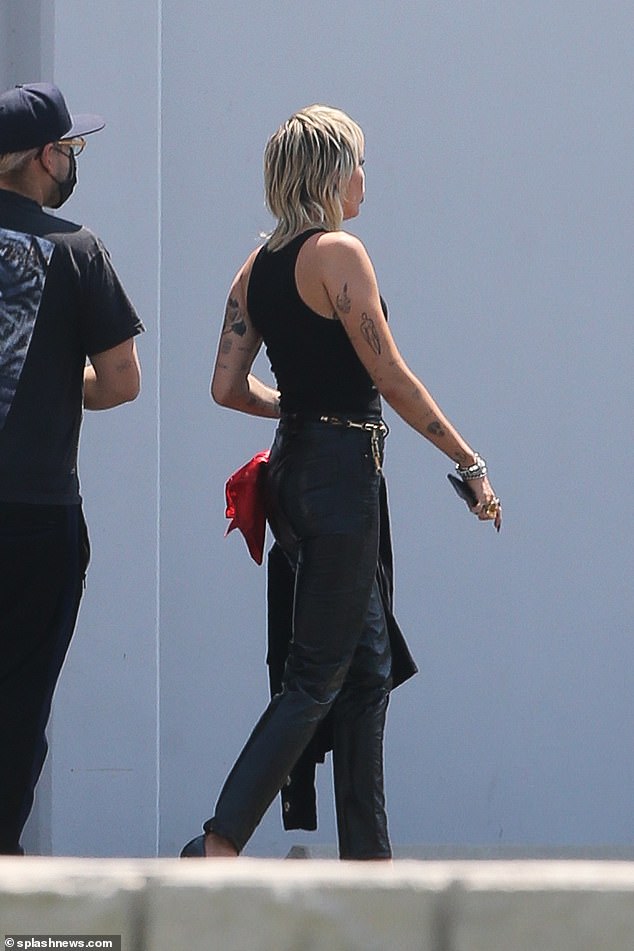 Back on the market: Cyrus has recently split from boyfriend Cody Simpson after less than a year together

A source told People the singer is ‘fine and focused on her new music.’

‘She and Cody are still super supportive of each other,’ the source said, adding the duo split in July and there has been ‘no drama’ between the pair.

Indeed, Cody has been cheering Miley on, even after their breakup. 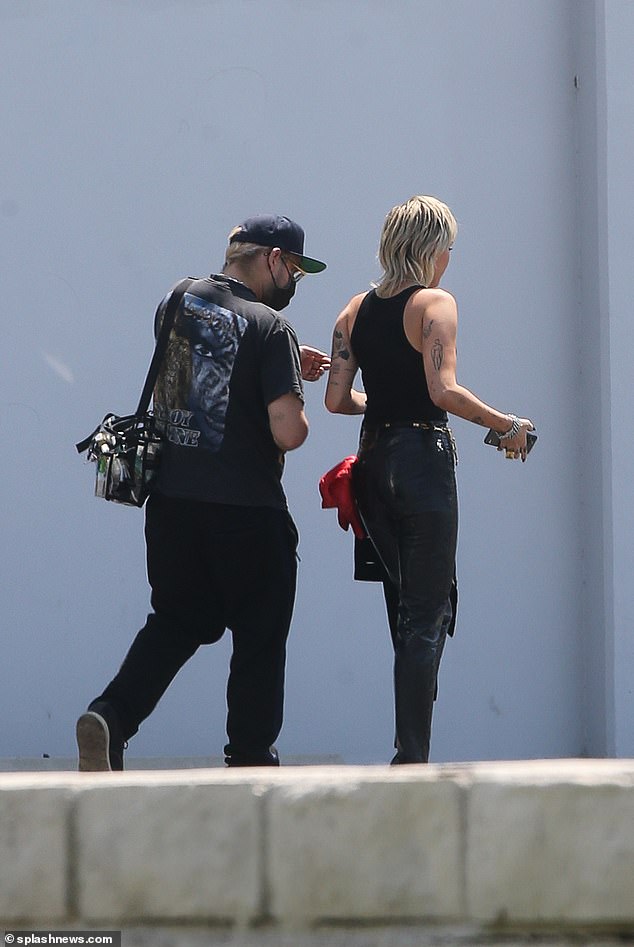 Walk and talk: A masked-up man caught up with Miley

After Miley released her new song Midnight Sky, Cody took to his Instagram account to wish her well.

‘So proud of you. Congratulations to the most special of all,’ he wrote on his Instagram stories last week.

He even appeared to be encouraging his followers to buy the song, adding: ‘Go cop that new!’ 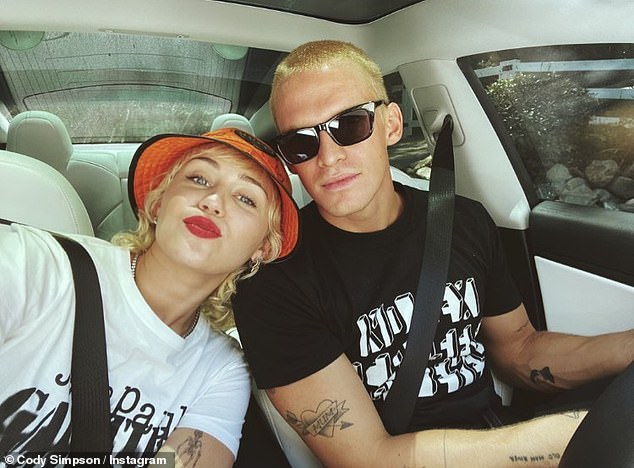 Cheering her on: Simpson recently wished Cyrus well after their breakup