MTV EMAS 2022: What the frock! Bebe Rexha sports a VERY bizarre blue outfit as she leads the worst dressed alongside a Kanye West-covered ensemble and rainbow suit

And this year was no different, as the red carpet was once again flooded with jaw-dropping looks, including from singer Bebe Rexha, who donned a showstopping blue velvet structured look.

While many pulled out the stops for the MTV Europe Music Awards held at the PSD Bank Dome in Germany’s Dusseldorf, others missed the mark and arrived wearing looks that should half been left in the wardrobe. 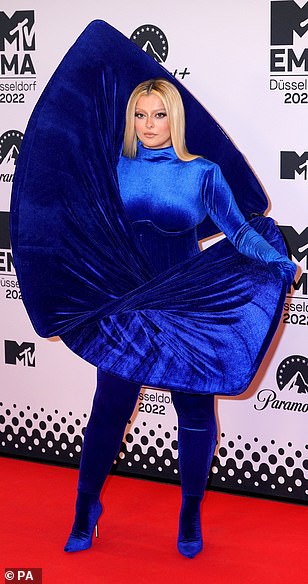 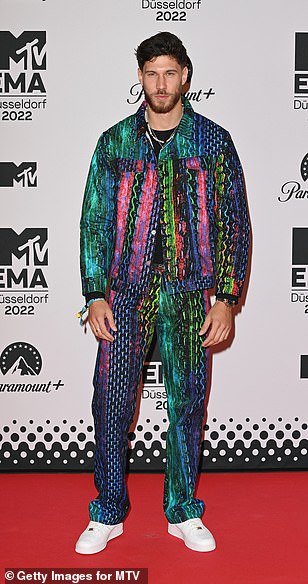 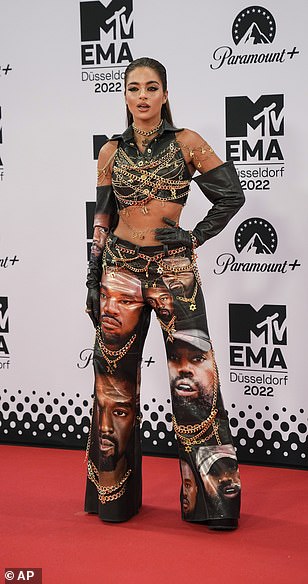 The blonde beauty exhibited her quirkiness with the unique number, which matched her head-to-toe velvet jumpsuit with a corset panel in to showcase her svelte waist.

Bebe, whose real name is Bleta, exuded confidence in the paneled outfit, which towered above her frame and finished by her knees. 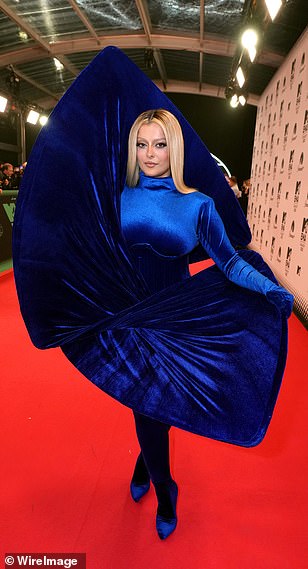 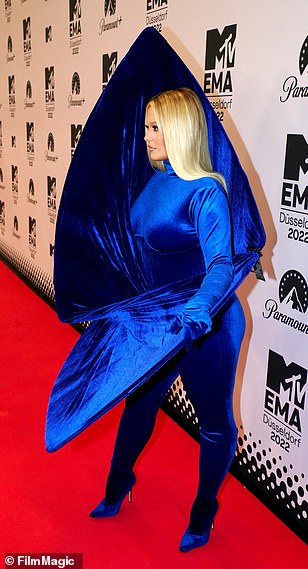 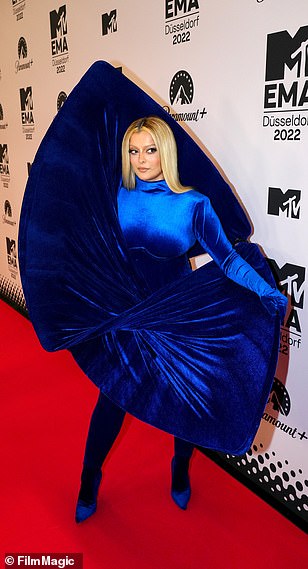 Electric: Bebe wore a full face of makeup, adding some drama to her eyes with a smoked eyeshadow look, strong contour and a glossy nude lip 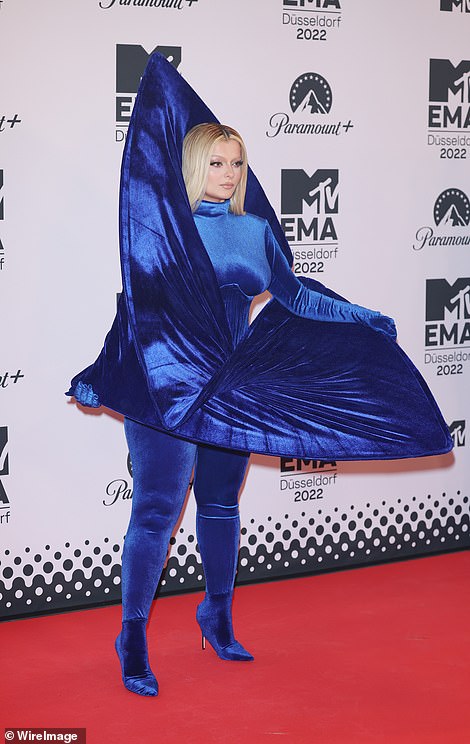 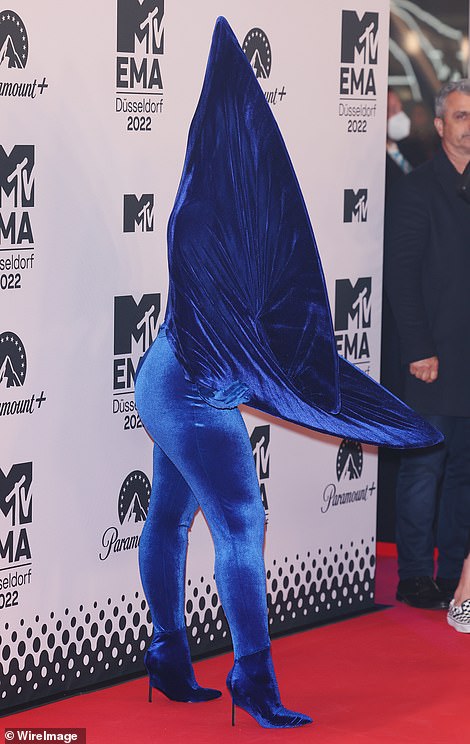 A look: She had to hold the lower section of the panel to keep the illusion of it encapsulating her supper half

The trouser section merged into pointed heels which added some height to her frame.

Also making a statement, was former Love Island star Jack Fowler, 26, who stood out from the crowd in a vibrant neon multi color snakeskin-print co-ord.

The bold look was worn with a black T-shirt and white Nike trainers. 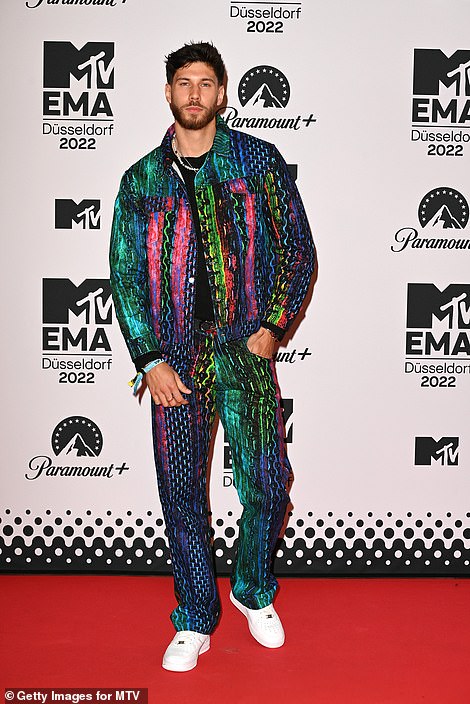 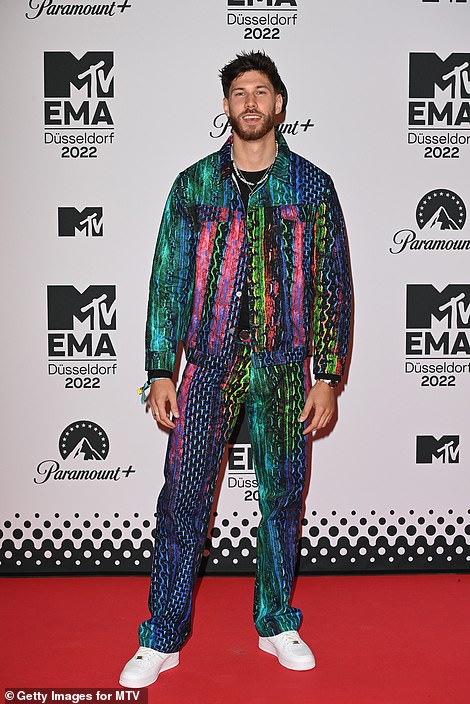 Standing out: Also making a statement, was former Love Island star Jack Fowler, 26, who stood out from the crowd in a vibrant neon multi color snakeskin-print co-ord

Following a spate of recent controversies, it was an unusual choice for Israeli Noa Kirel to wear a co-ord covered in prints of Kanye West’s face.

Noa, 21, who has won the MTV Europe Music Awards for the best Israeli act between 2017 and 2021, flashed her toned abs in the usual co-ord which were also teamed with a pair of matching gloves.

The Eurovision song contest entrant wore her hair slicked back and sported a full face of make-up. 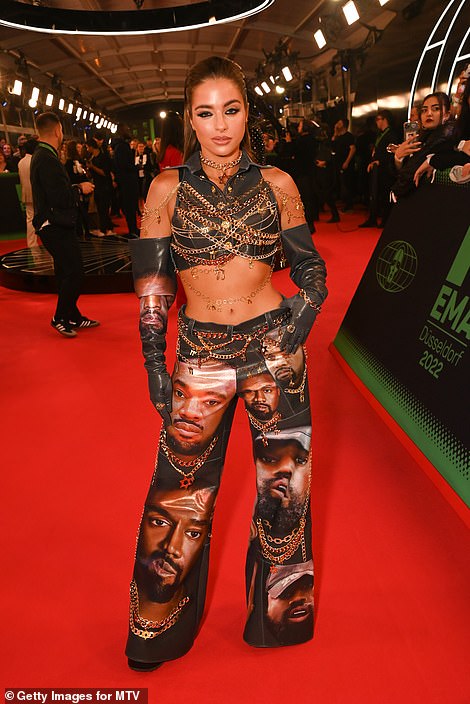 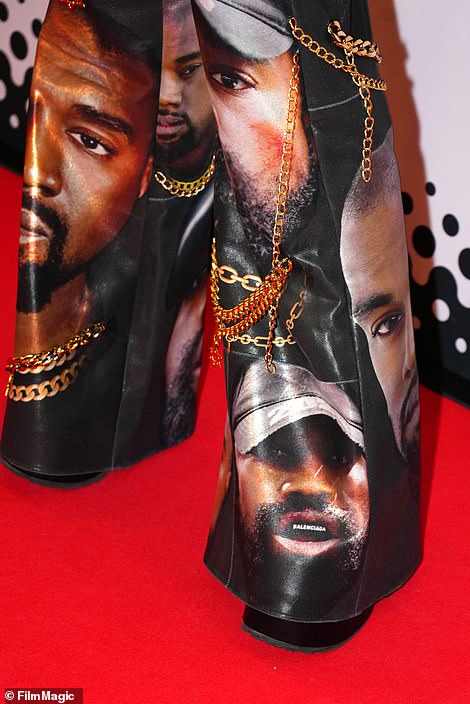 Statement: Noa, 21, who has won the MTV Europe Music Awards for the best Israeli act between 2017 and 2021, flashed her toned abs in the usual co-ord which were also teamed with a pair of matching gloves

During the evening, Taylor Swift led the way as she won four gongs.

The singer, 32, took home the Best Video and Best Longform Video award for her 10-minute version of All Too Well (Taylor’s Version), beating top global stars including Foo Fighters and Stormzy. 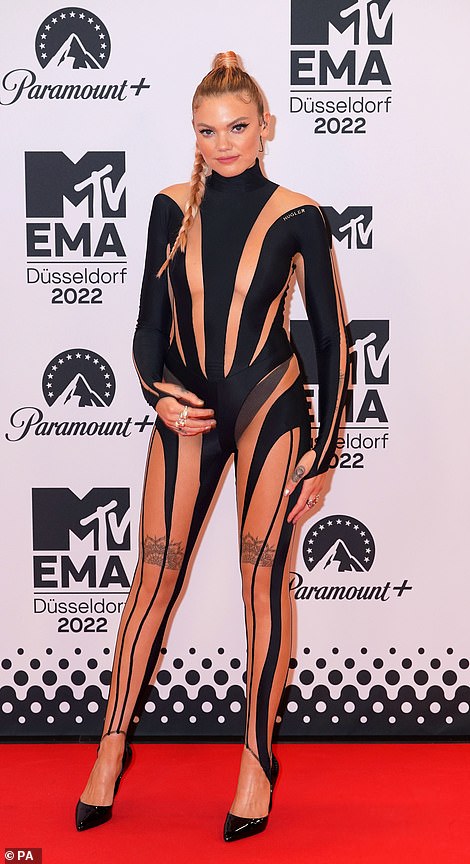 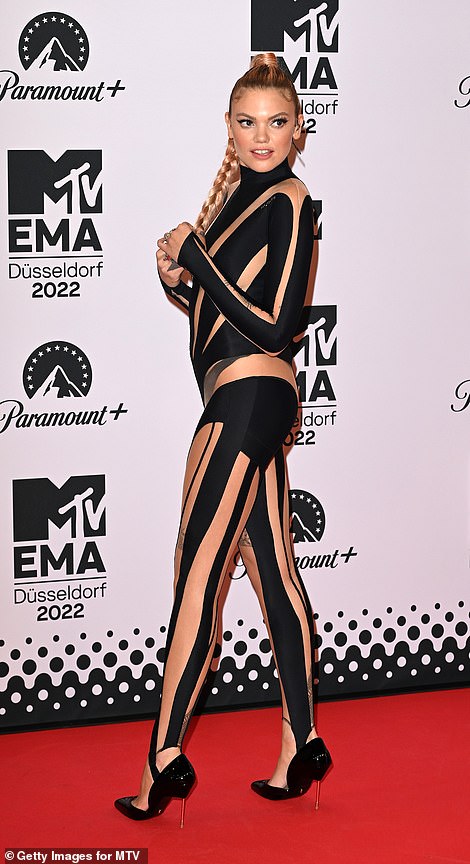 Risque! Becca Dudley’s look was maybe a little too daring for the red carpet

Elsewhere, Taylor was named the winner of the Best Artist category, the Best Pop prize, while she was also nominated in the Biggest Fans section, which was won by BTS.

Accepting the first award from John Lennon’s son and singer Julian, who presented the prize, she said: ‘It’s so good to be back at the EMAs. You all look very beautiful tonight.’

The singer-songwriter continued: ‘I have been writing and directing my music video for a long time but this was the first short film I have made and I felt like I learned so much about myself of how making film can be a natural extension of my storytelling just like songwriting.’

Taylor also thanked actors Dylan O’Brien and Sadie Sink who starred in the music video and praised her fans for their continued support, adding: ‘You’re the reason that anything has every happened to me.’

The track went viral earlier this year after fans speculated the song is based on Taylor’s break-up with actor Jake Gyllenhaal.

It also picked up the prestigious video of the year gong at the MTV Video Music Awards earlier this year.

British band Muse next picked up the Best Rock Prize after delivering an electric performance to their new track Will Of The People at the start of the ceremony.

This year’s ceremony is being hosted by celebrity power couple singer-songwriter Rita Ora and Oscar-winning filmmaker Taika Waititi and marks the sixth time the awards show has been held in Germany.

It is the couple’s first time working together after keeping their partnership mostly out of the spotlight since they first sparked relationship rumours last year after appearing alongside each other on red carpets.

Meanwhile, Nicki Minaj was winner of the Best Song prize for her track Super Freaky Girl, while DJ David Guetta and singer Bebe Rexha came out on top in the Best Collaboration for their hit I’m Good (Blue). 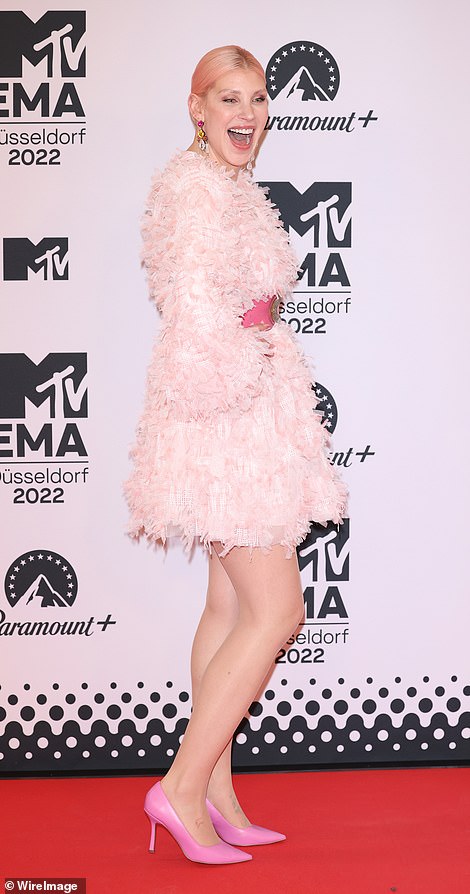 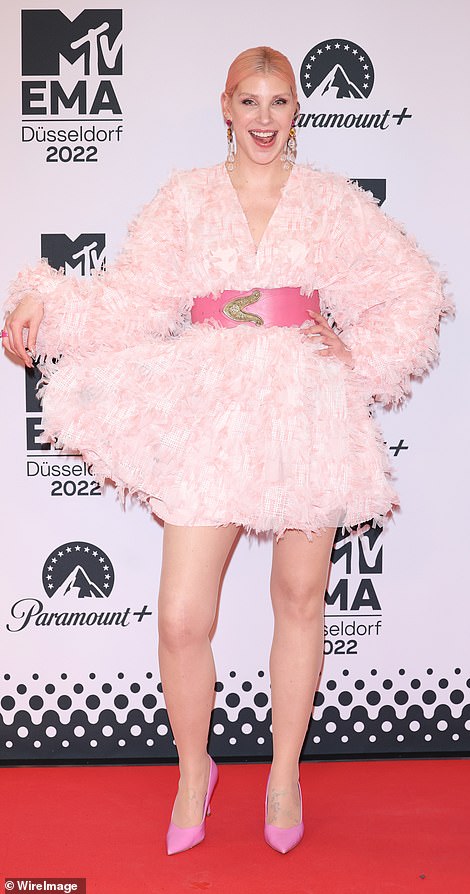 Flamingo pink: Laura Maack opted for a fluffy pink dress with a belt and pink stilettos

Nicki was also named the winner of the Best Hip Hop category.

The winner of the Best New award was boyband Seventeen, while Lisa took home the Best K-Pop gong.

Anitta was named the winner of the Best Latin award David Guetta triumphed in the Best Electronic category.

Band Muse triumphed in the Best Rock category, while the Gorillaz won the Best Alternative prize.

Sam Smith and Kim Petras won in the Video For Good category for the promo for their song Unholy,

Panic! At The Disco