Nicole Scherzinger, 41, and Thom Evans, 34, put on a VERY cosy display in steamy pool snap as they holiday in Mexico after going public with their romance

They finally went public with their relationship at the Golden Globes last week.

And Nicole Scherzinger, 41, and Thom Evans, 34, looked every bit the perfect couple as they packed on the PDA in an Instagram snap which Thom shared on Sunday.

The couple have travelled to Los Cabos, Mexico and couldn’t keep their hands off each other as they posed in the pool. 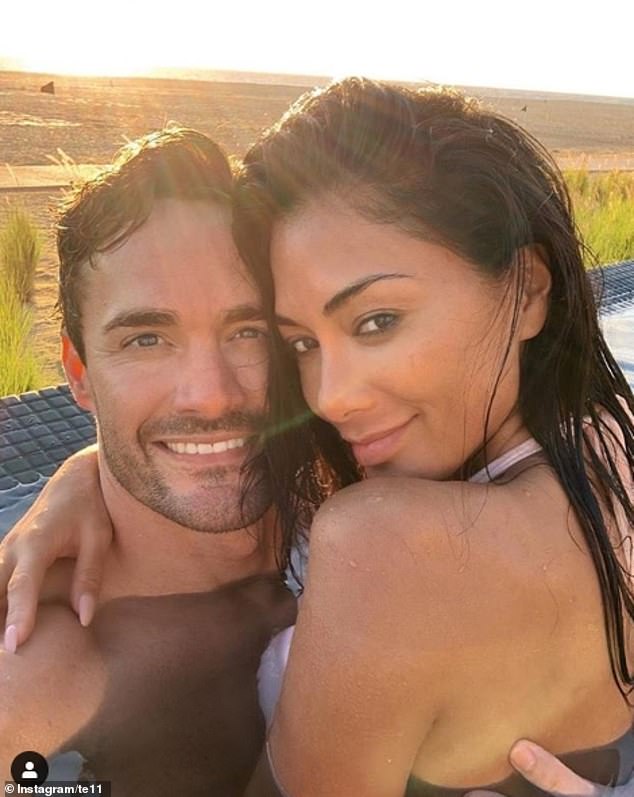 Lovers: Nicole Scherzinger, 41, and Thom Evans, 34, put on a VERY cosy display as they hit the pool in Mexico on Sunday

The make-up free Pussycat Dolls star looked stunning as she rested her head against Thom, who wrapped his arm around her.

And Thom fulfilled his boyfriend duties as he took Nicole’s all important Instagram snap, which showed the X Factor judge pouting for the camera as the sun went down in the distance.

The singer captioned the photo: ‘ What an incredible new year getaway at @nobuloscabos Such a beautiful and blessed time to reflect and recharge! I’m comin for ya 2020’‬. 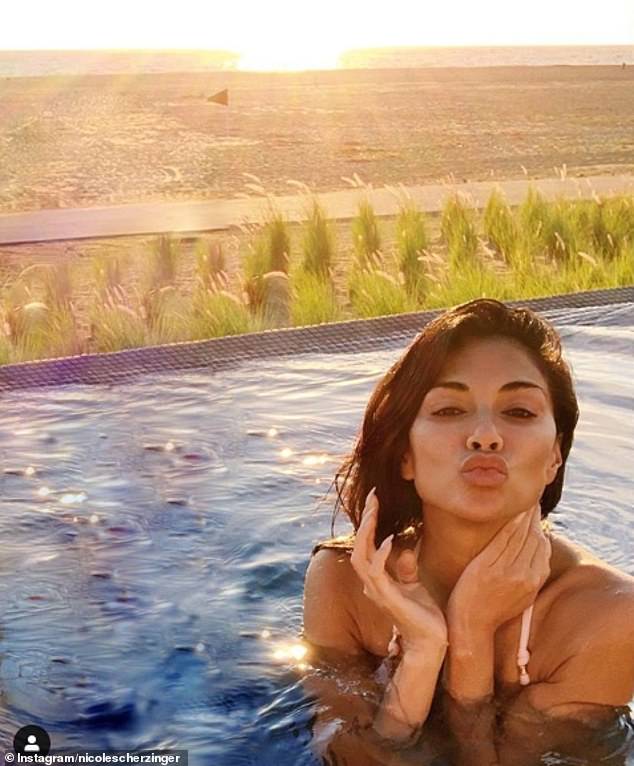 New flame: Thom fulfilled his boyfriend duties as he took Nicole’s all important Instagram snap, which showed the X Factor judge pouting for the camera 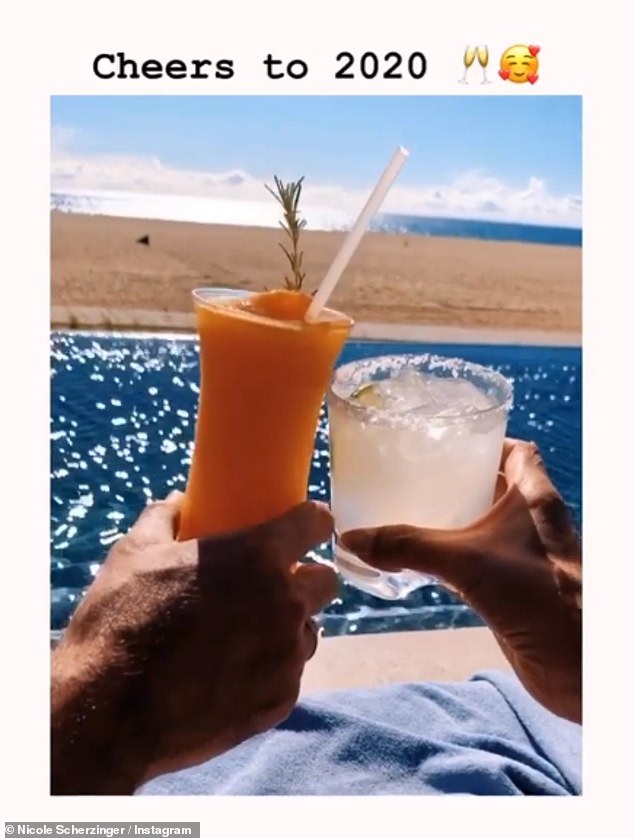 Cheers to 2020! The couple enjoyed cocktails as they looked out over the idyllic beach view

The couples’ getaway comes after they finally confirmed their romance with a joint appearance at the Golden Globes Awards following months of speculation.

Nicole and Thom were rumoured to have started dating after they spent time together on The X Factor: Celebrity.

Thom was a contestant with his Try Star band, while Nicole was on the judging panel.

Nicole reportedly even sent Thom home after coming to the conclusion it would be easier to keep their budding relationship private for longer if he was no longer in the competition. 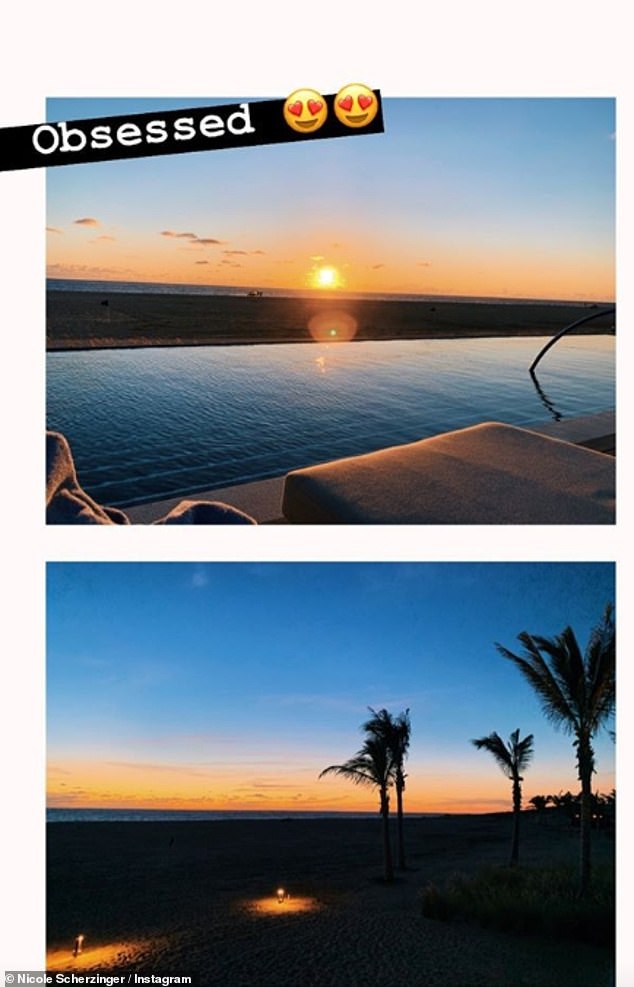 Stunning: The songstress shared a slew of snaps on her Instagram of the breathtaking scenery, telling fans she was ‘obsessed’

While their relationship is new, Thom has reportedly been bidding for her affections for the past six years,

He was said to have first tried his luck with the popstar at the Global Gift Gala in 2014 – back when she was going through a rocky patch with her boyfriend at the time, Lewis Hamilton.

But Thom was rebuffed according to The Sun and it wasn’t until the pair spent time together in last year’s series of The X Factor: Celebrity that his feelings were reciprocated.

‘Thom knew he’d have a lot of fun on the show and not just because of the singing’, a source told the publication.

‘He’s been after Nicole for some time and was confident that spending so much time in her company would give him the opportunity to woo her.

‘In the end, she couldn’t resist Thom’s charms, despite the fact that she was meant to be judging him.’

MailOnline has contacted Thom and Nicole’s representatives for comment. 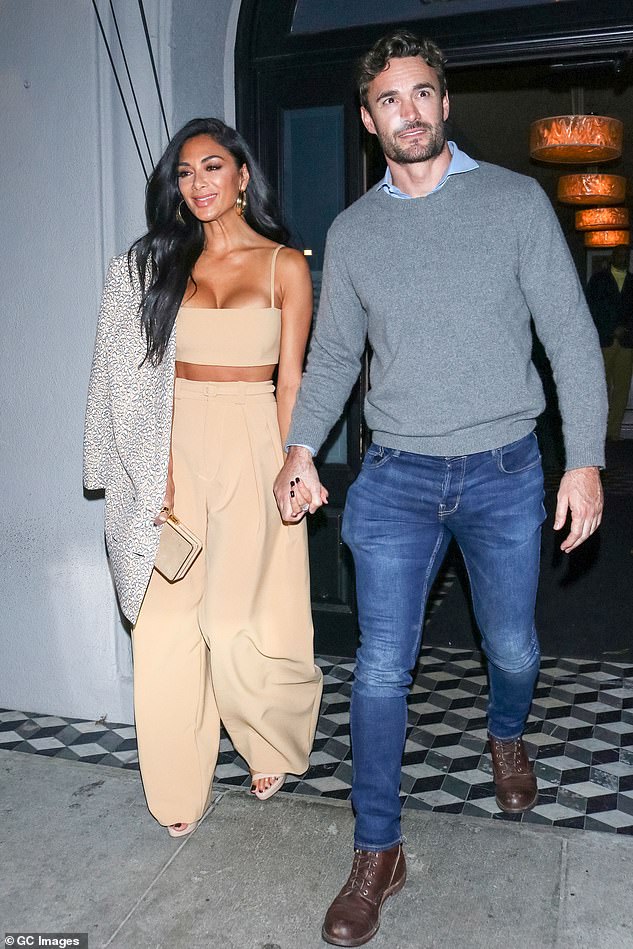 Loved-up: Since appearing at the Golden Globes together, the couple have since been spotted together a number of times (pictured leaving a dinner date at Craig’s in Hollywood on Tuesday)