Nicole Scherzinger shows off her abs in a glamorous magenta gown while Megan McKenna stuns in a red dress with thigh-high split after X Factor: Celebrity

Nicole Scherzinger ensured all eyes were on her as she left the LH2 studios after The X Factor: Celebrity on Saturday night.

The judge, 41, showcased her incredible figure in a plunging magenta pink silk gown, which she had worn on the ITV show.

Megan McKenna, 27, looked equally as glamorous in a strapless red satin dress, which came complete with a dramatic thigh-high split. 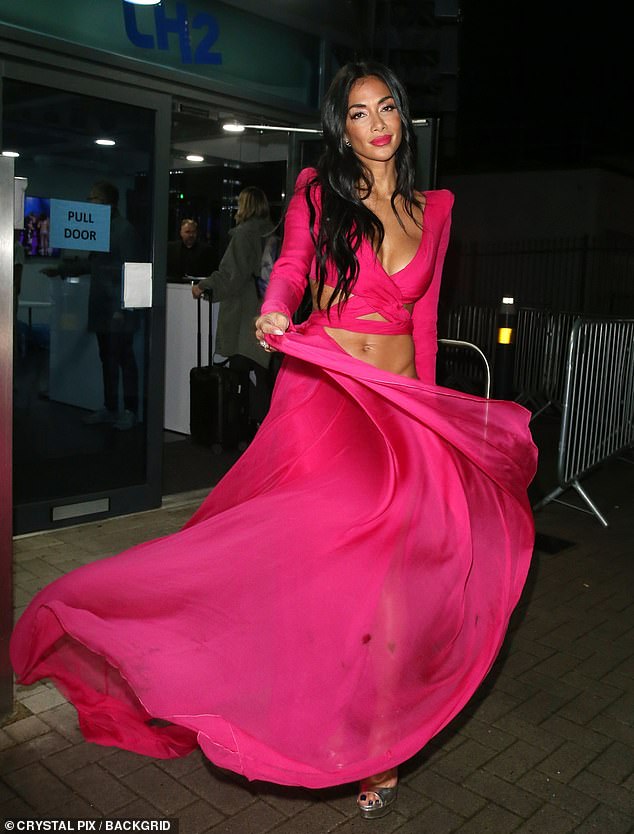 Sizzling display: Nicole Scherzinger ensured all eyes were on her as she left the LH2 studios after The X Factor: Celebrity on Saturday night

Nicole opted to shun the cardinal legs-or-cleavage rule in the striking dress. As she strutted out the studios in her silver peep-toe heels, the singer flashed a hint of her tanned and toned legs.

The Pussycat Dolls songstress made her exit look like she was walking down the catwalk as she stopped to twirl for the cameras to show off the gown’s flowing skirt. 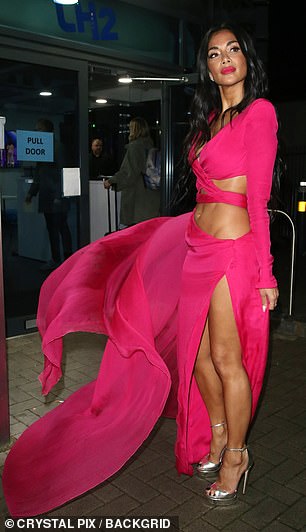 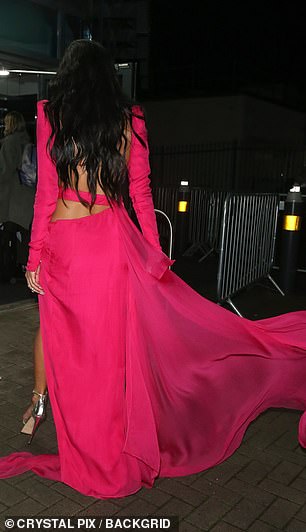 Glamorous: The judge, 41, showcased her incredible figure in a plunging magenta pink silk gown, which she had worn for the show 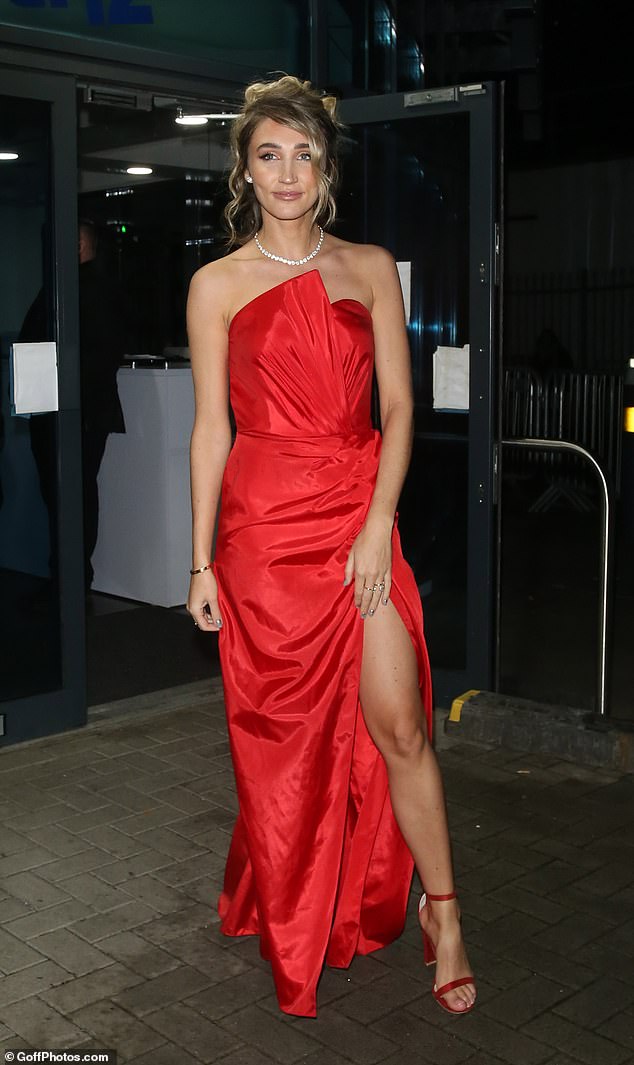 Lovely: The reality star wowed in her red gown which featured a wrap over bodice and daring slit in the skirt 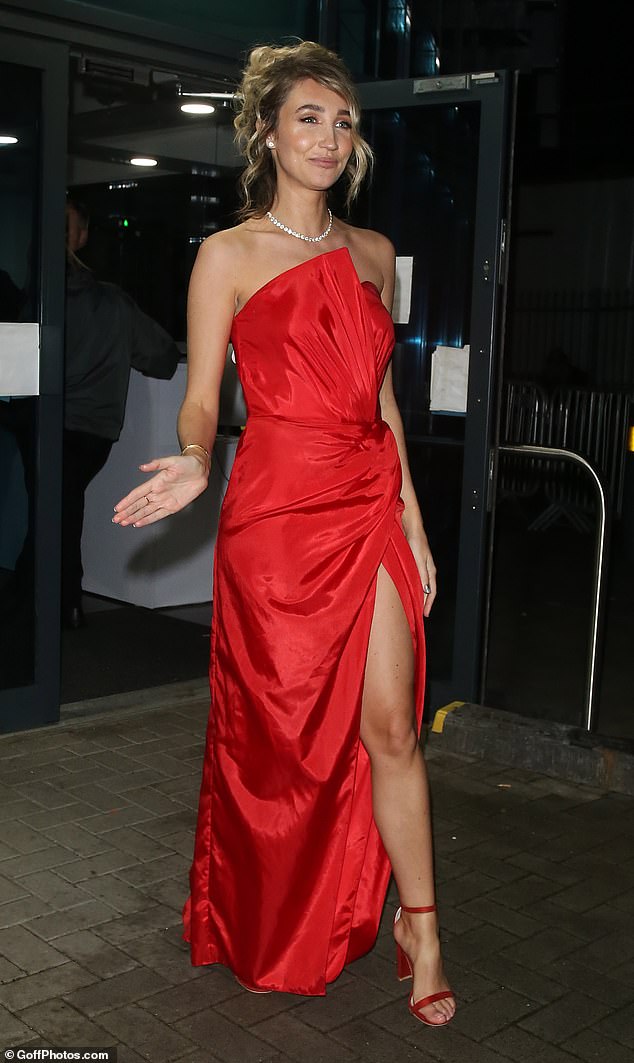 Leggy: She complemented her stage ensemble with matching chunky heels and a glittering diamond necklace

Nicole wore her raven locks in glamorous curls and finished off the look with a matching pink lipstick and eyeliner.

Megan, meanwhile, wowed in her red gown which featured a wrap over bodice and daring slit in the skirt.

She complemented her stage ensemble with matching chunky heels and a glittering diamond necklace. 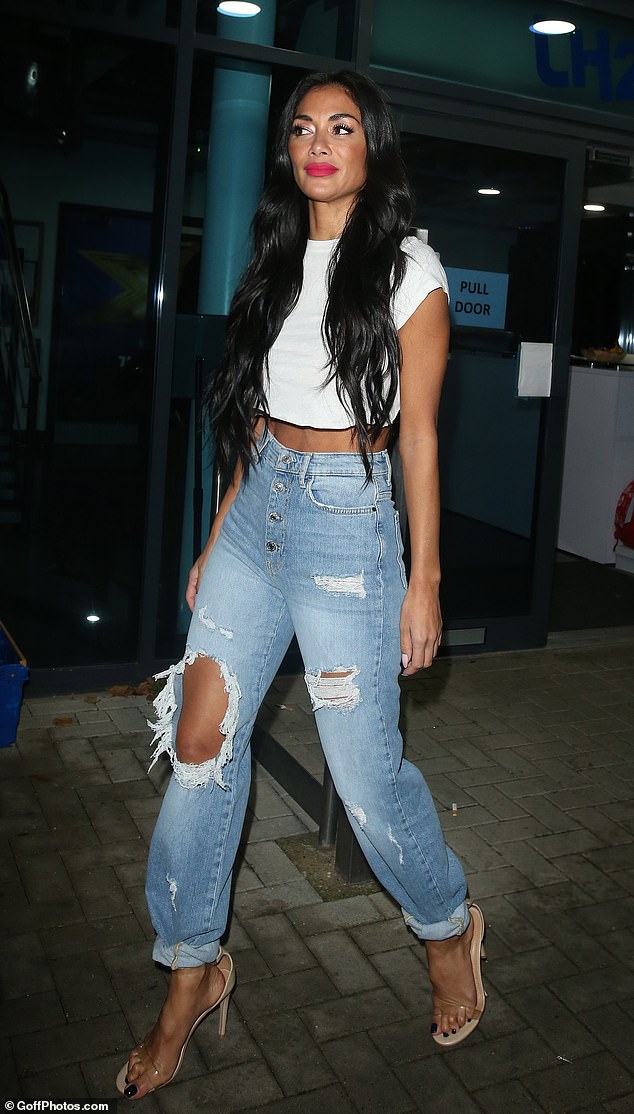 Outfit change: Nicole later changed out of her dress and into a cropped white T-shirt and ripped denim jeans 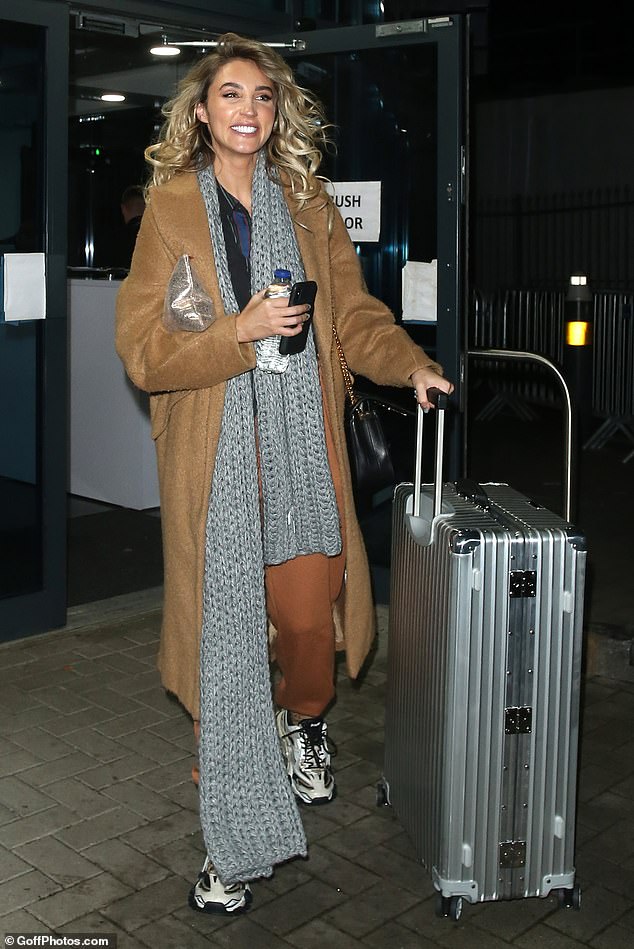 Wrapping up: Megan slipped into burnt orange joggers and a camel coat

The former TOWIE star swept her hair up into an elegant up-do so as to let her outfit take centre-stage.

Megan later changed into burnt orange joggers and a camel coat, while Nicole slipped into a cropped white T-shirt and ripped denim jeans.

Megan, who is a strong contender in the competition, left the studios shortly followed by Nicole’s rumoured love interest Thom Evans, 34. 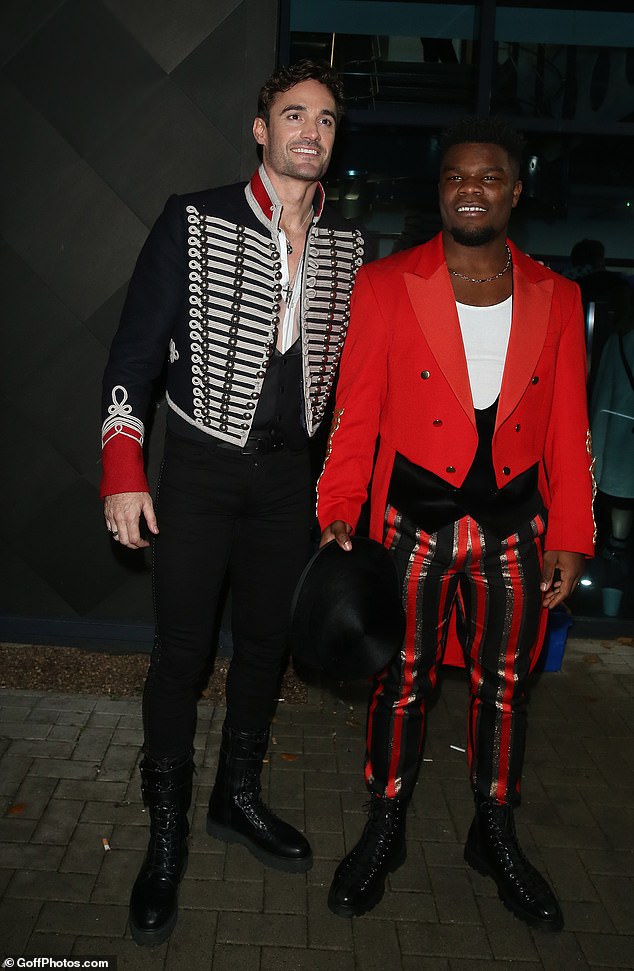 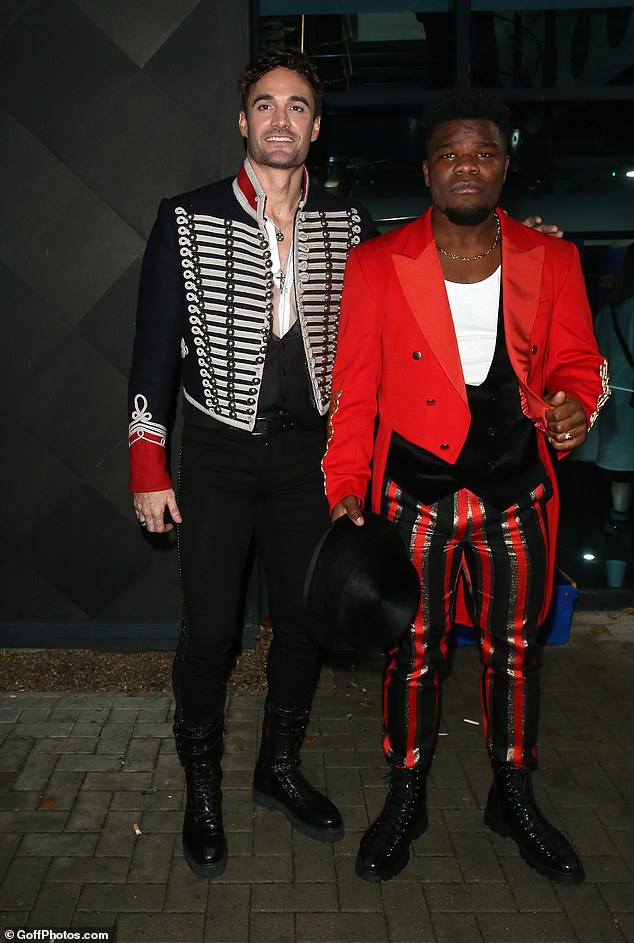 Showmen: Thom was elaborately dressed in his Greatest Showman costume and so was Levi 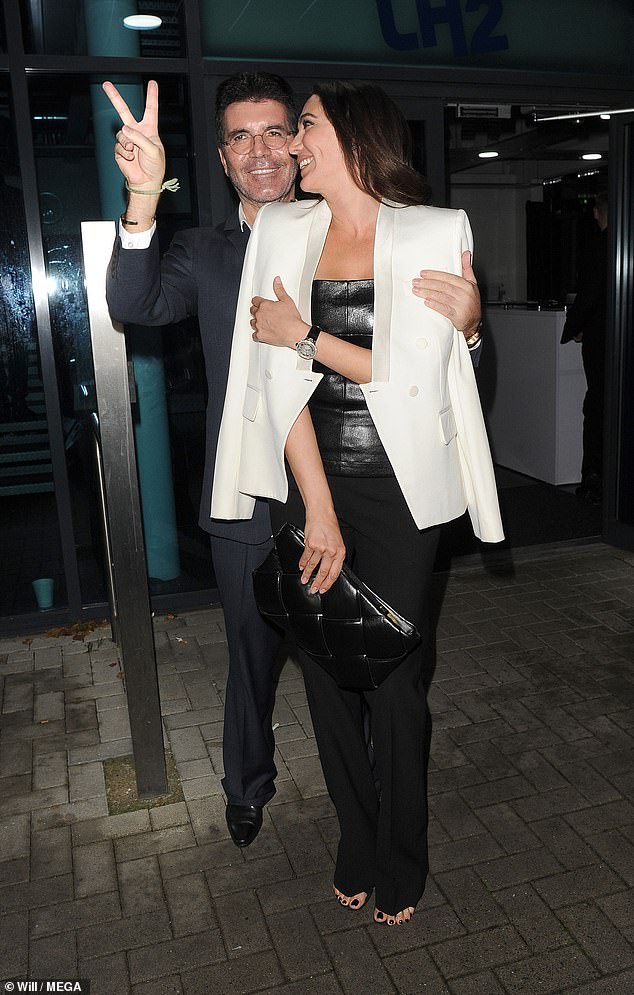 Coy: Simon Cowell hide behind his girlfriend Lauren Silverman as they left the studios 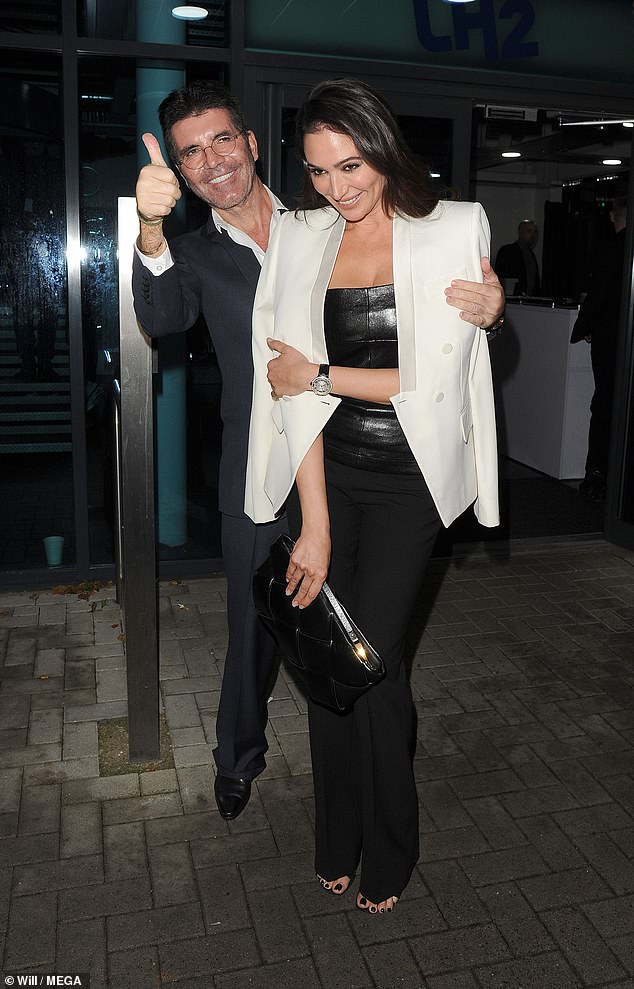 High spirits: The music mogul, 60, gave a thumbs up to the camera

Having fun: Businessman Simon appeared in great spirits as he posed for the cameras outside the venue, despite being disappointed over his group Try Star’s departure 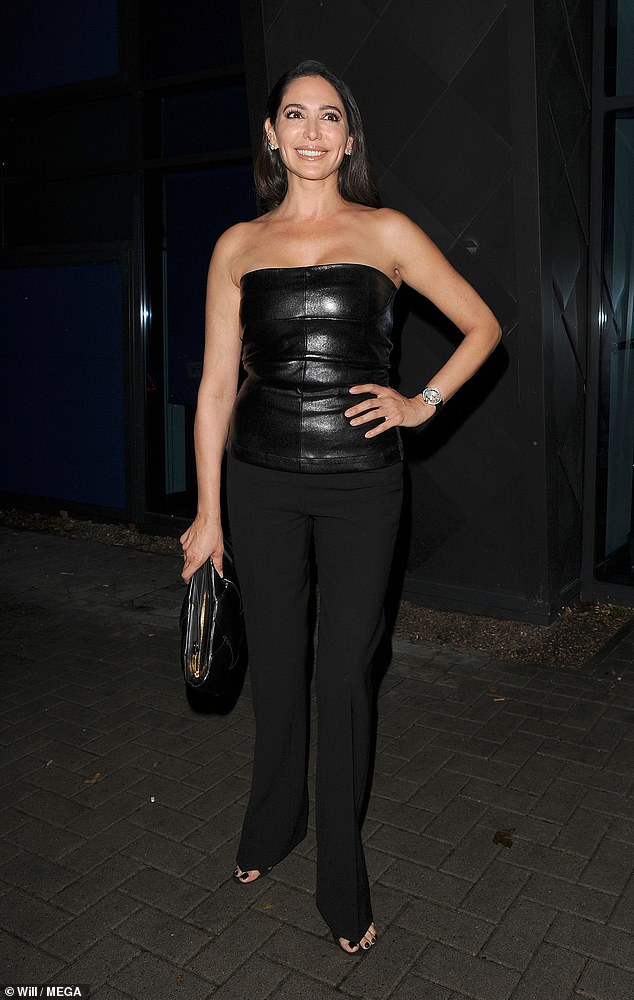 Catching the eye: Lauren wowed in a strapless PVC jumpsuit

Thom was elaborately dressed in his Greatest Showman costume and so was his TryStar bandmate Levi Davis, 21.

TryStar appeared in high spirits despite being eliminated from the competition on Saturday night.

Thom recently addressed romance rumours with judge Nicole after it was reported they enjoyed a date together.

Thom told MailOnline earlier this week: ‘She’s stunning. And has [romance] crossed my mind? Yes. But we don’t have much time.’ 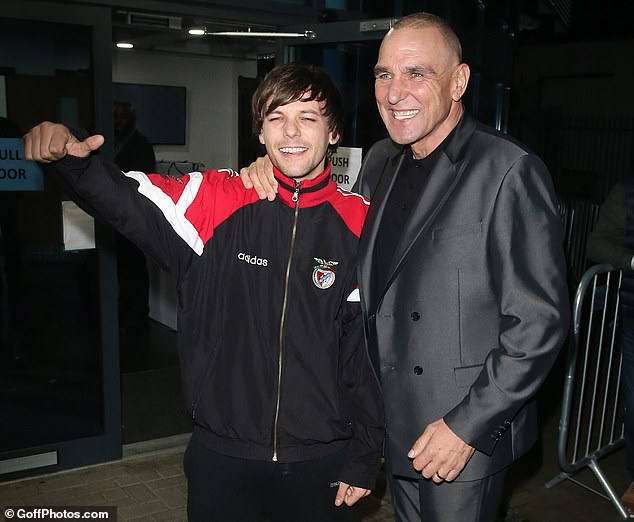 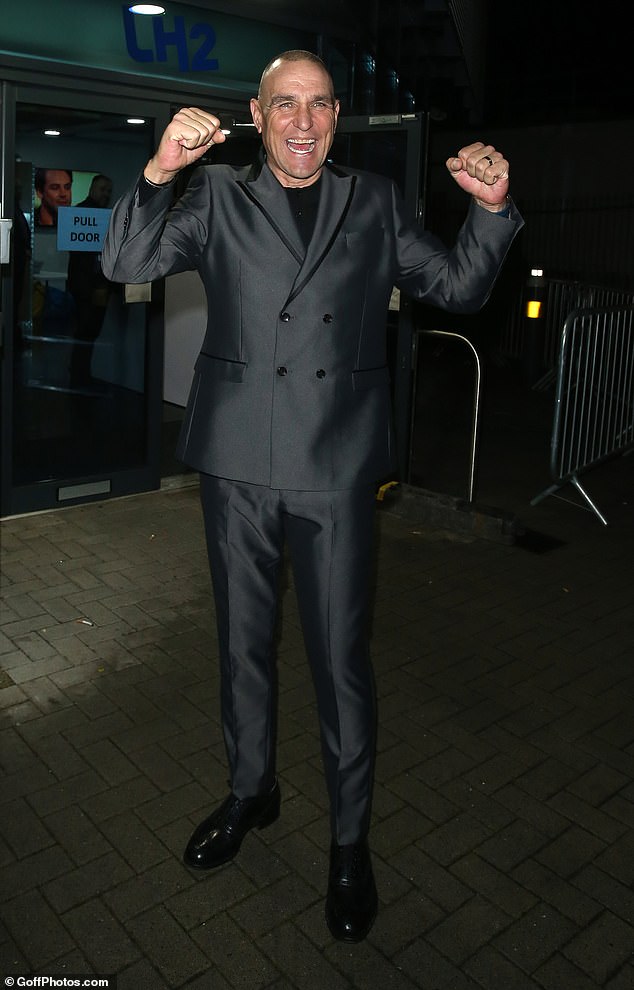 High spirits: Vinnie punched his hands in the air after performing Dirty Dancing on the show 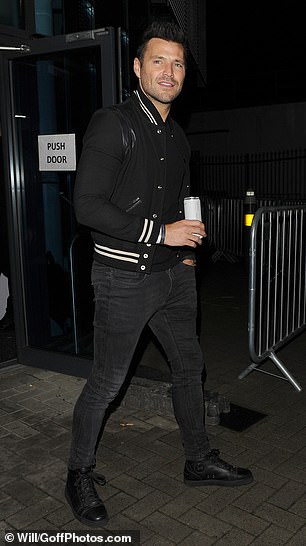 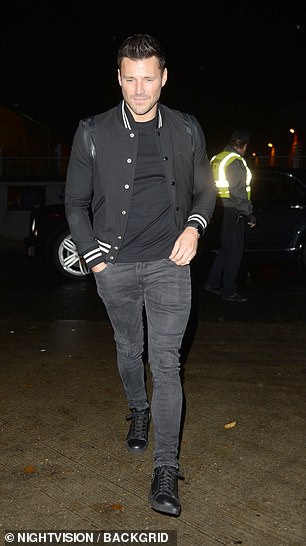 Boozy: Mark Wright clutched a beer as he made his exit after watching the show

Showing his support: The television personality appeared to have thoroughly enjoyed the show

And when asked about Nicole during a recent appearance on Loose Women, Thom said: ‘Look Nicole is lovely but I’ve been concentrating on the bromance… I just want to get to the final. Who wouldn’t want to date Nicole because she’s lovely.’

A supportive Ben added: ‘Who wouldn’t want to date Thom because he’s lovely.’

It’s said Thom enjoyed a romantic date with Nicole last week, with the pair having had ‘great chemistry from the off’.

The Sun On Sunday reported the duo flirted and texted for weeks before Thom eventually asked out the Don’t Hold Your Breath songstress. 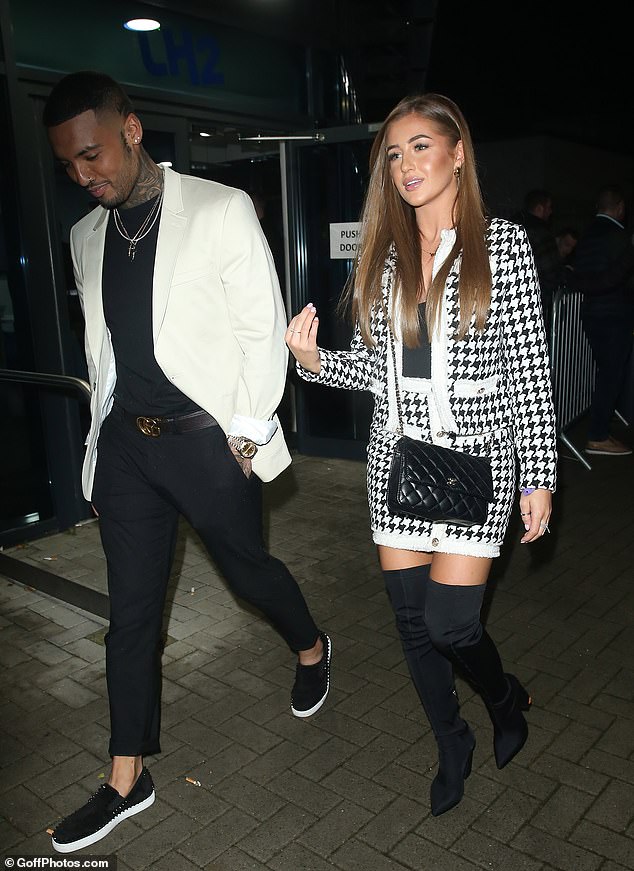 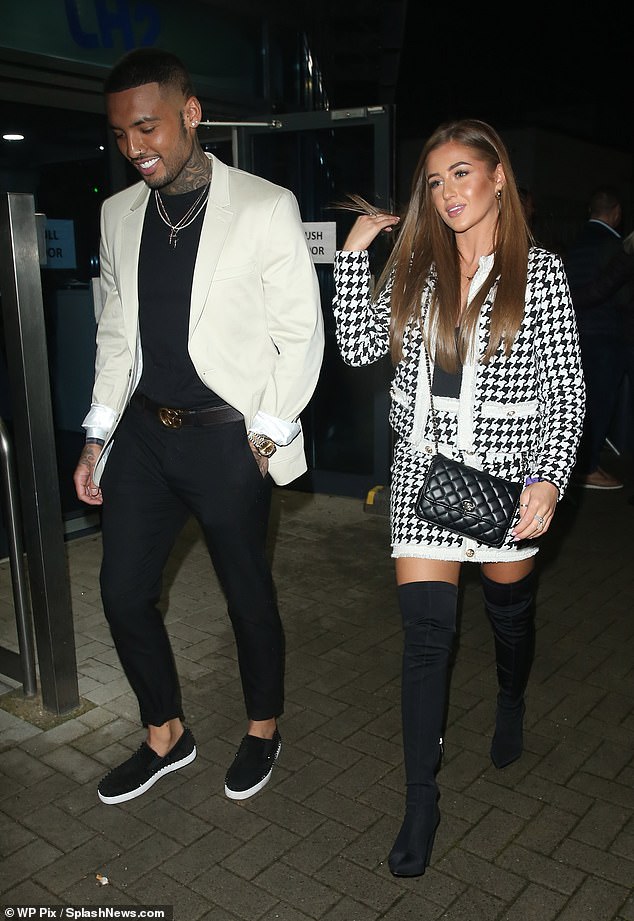 Wedding bells on the horizon? Georgia and Callum are rumoured to be engaged after the reality hunk, 23, popped the question just one month into their relationship 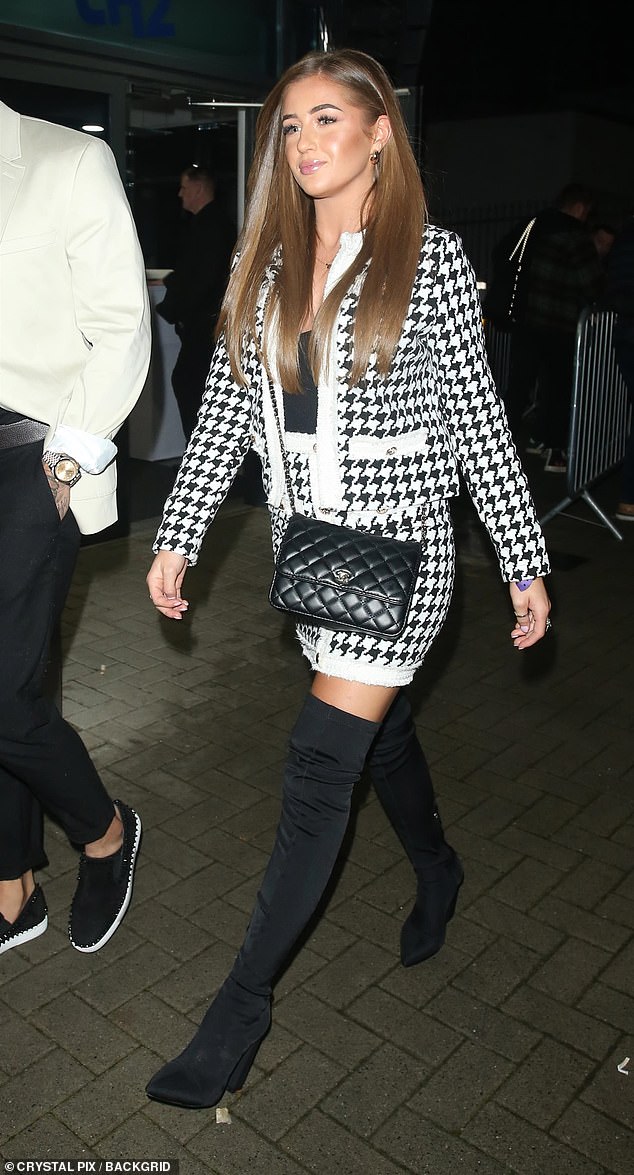 Chic: The reality star, 21, cut a stylish figure in a dogtooth print jacket and matching skirt 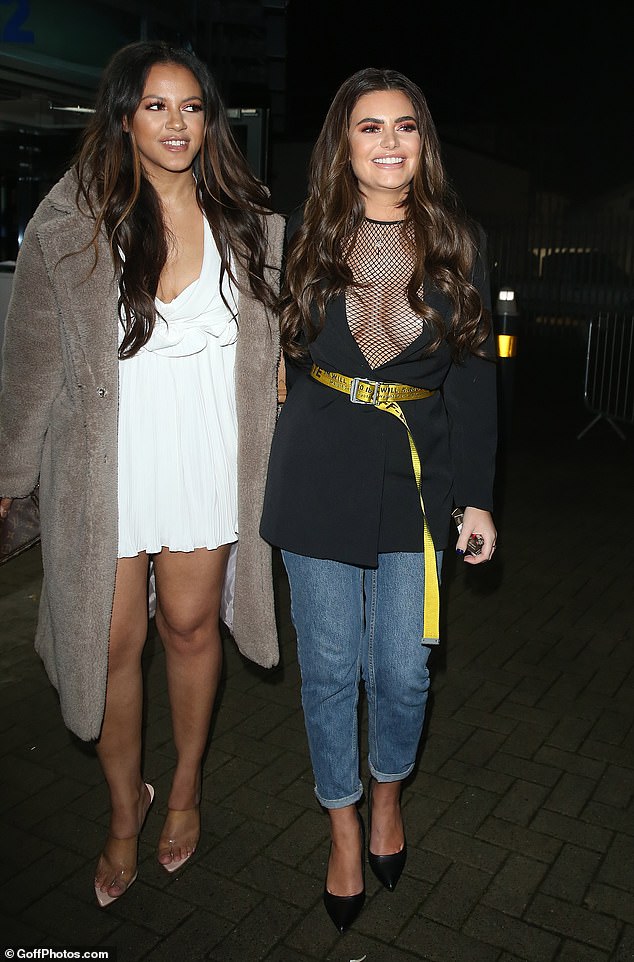 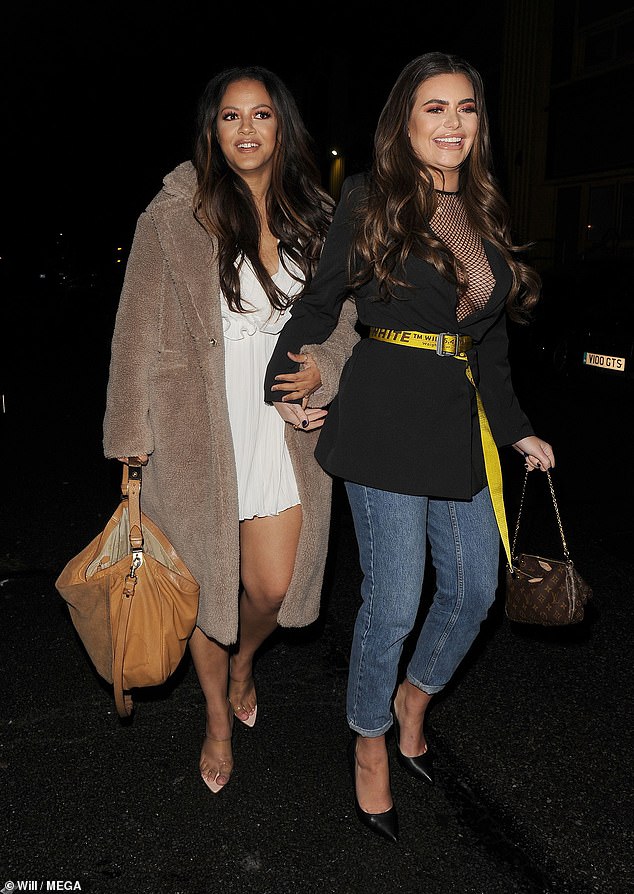 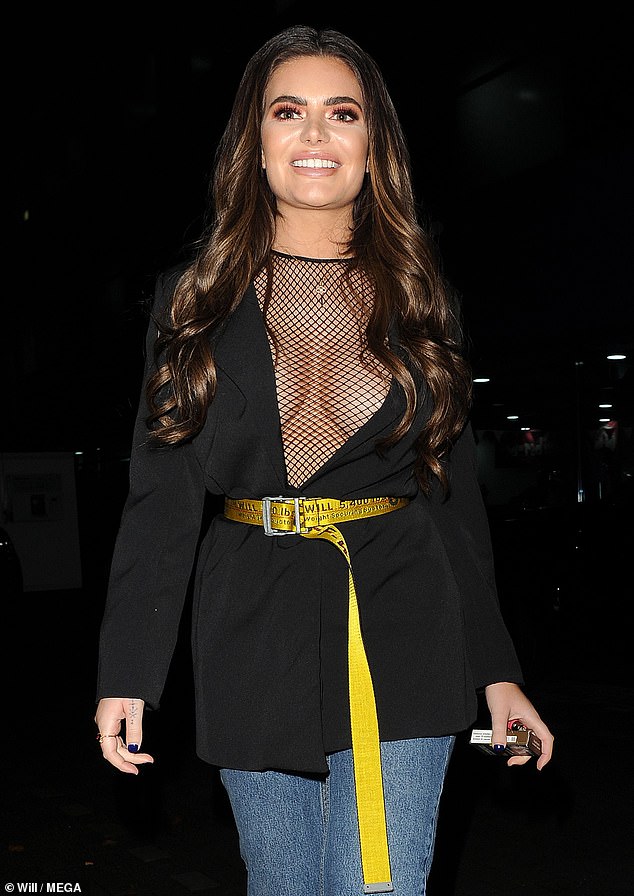 All eyes on her: Megan showed off her ample cleavage as she opted to go braless in the revealing top

A source told the publication: ‘Thom is completely Nicole’s type. And for his part, Thom was smitten early on — he’s always said Nicole is one of the most beautiful women in the world.

‘He fancied her long before meeting her on the show. He was initially a bit nervous about starting something up, and ruining his chances on the series, but they had great chemistry from the off. 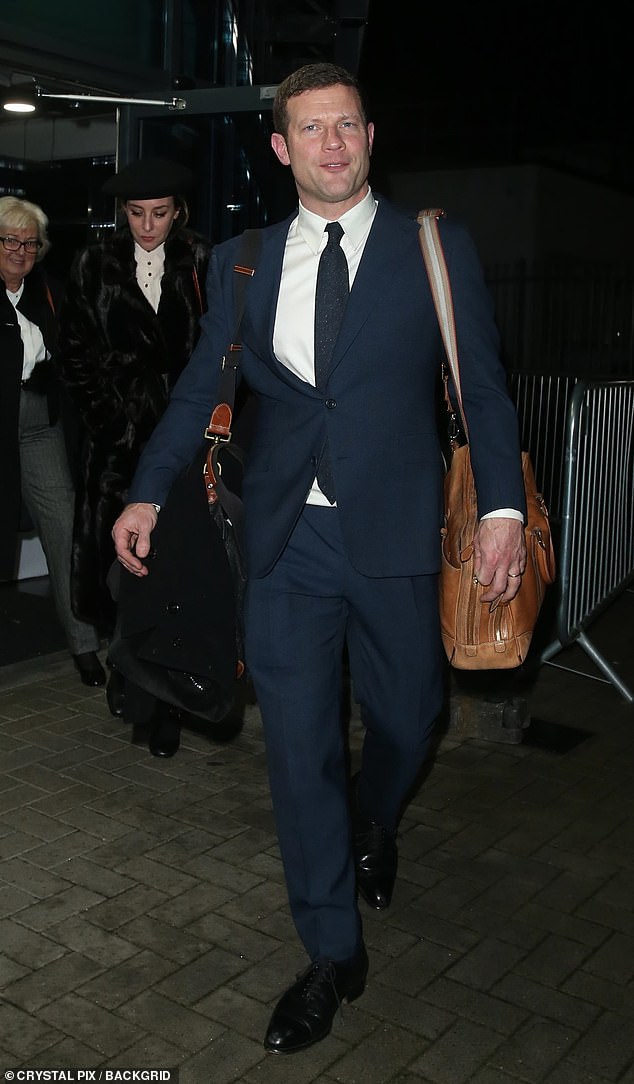 Time for bed: Dermot O’Leary looked a little weary after hosting the show 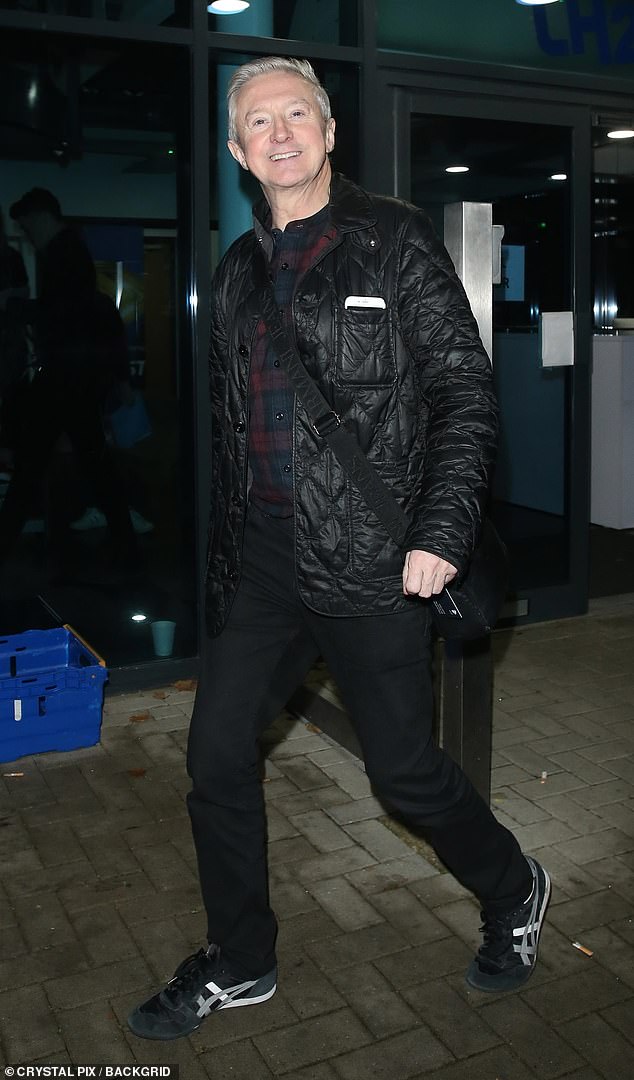 Happy: Louis Walsh smiled for the camera as he left the studios 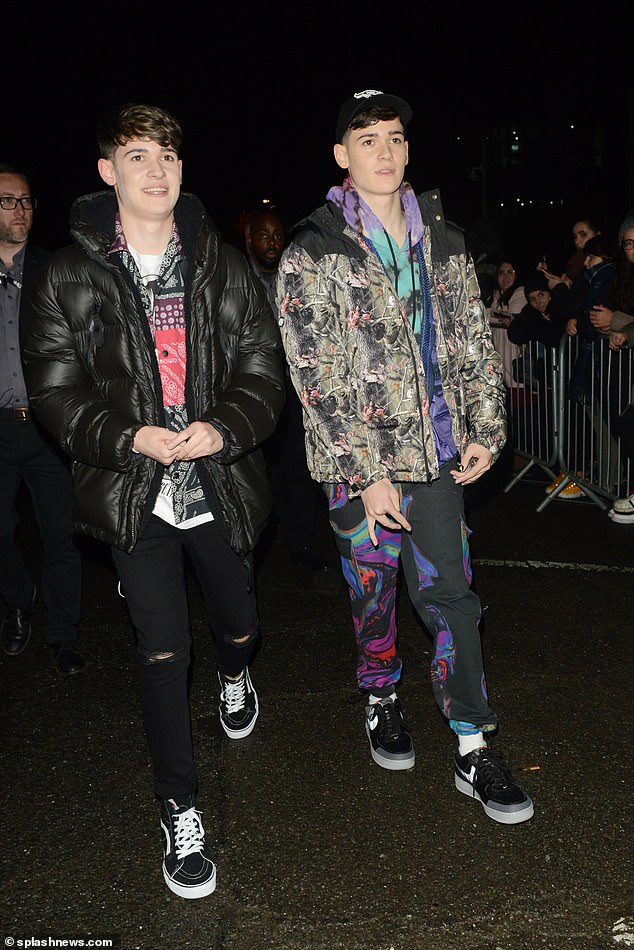 Popular: Max and Harvey were swarmed by fans as they made their exit

‘And after weeks of texting, Thom finally plucked up the courage to ask her out, and took her for dinner.’

The rugby hunk went on to date Jessica Lowndes of 90210 fame, while he was also linked to Made In Chelsea star Caggie Dunlop. 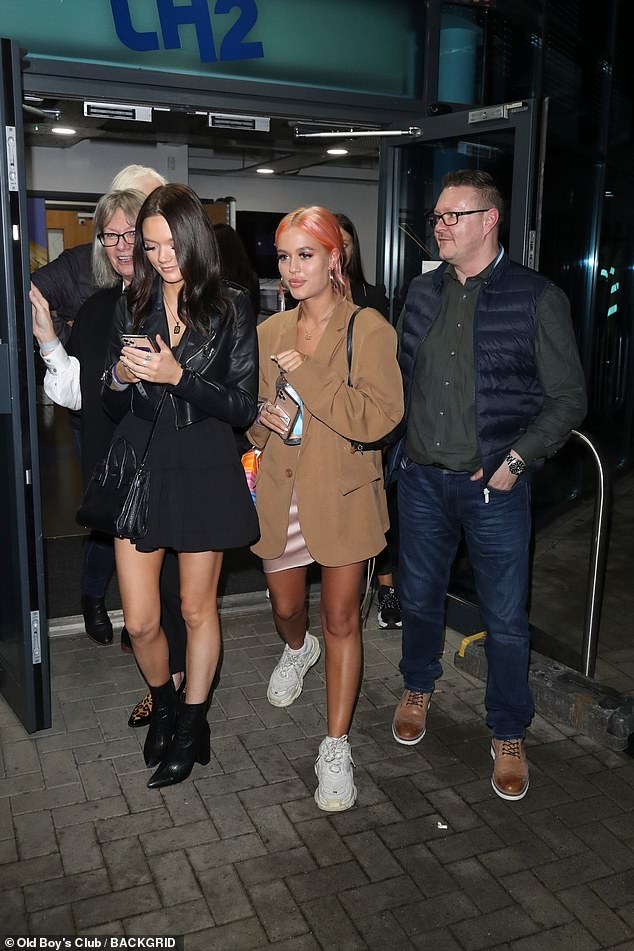 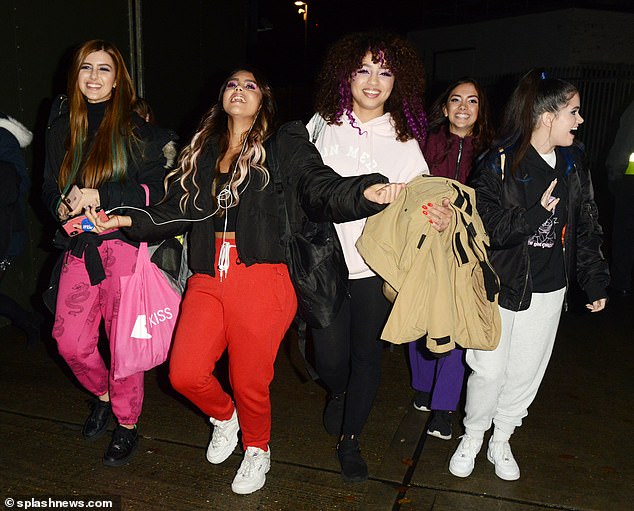 Girlband: V5 appeared in high spirits as they left the studios