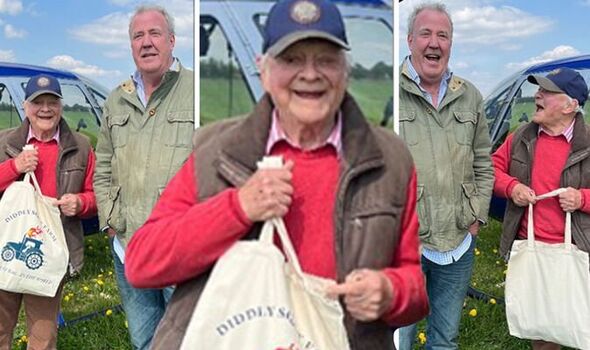 David Jason made a rare appearance after being spotted at Jeremy Clarkson’s farm.

Only Fools and Horses star David Jason, who is best known for his role as Del Boy, in the BBC programme, looked to be in good spirits as he laughed it up alongside Jeremy Clarkson.

Former Top Gear presenter Jeremy, 62, posed for pictures beside a helicopter on his farm land.

The 82-year-old cut a casual look as he sported a pair of corduroy trousers teamed with a crisp shirt, red jumper and a bodywarmer.

The actor added a cap that slightly covered his eyes as he held onto a Diddly Squat Farm bag, as he appeared to have done a bit of shopping at Clarkson’s Farm.

The pair were all smiles as it was revealed David flew to Jeremy’s farm shop in Oxfordshire by helicopter.

Fans flocked to the comment section, as Kaleb Cooper penned: “What a legend he is.”

Helen remarked: “Literally made my day.”

Luke gushed: “What a legend. In fact, two legends in one picture.”

David Jason starred as Del Boy in Only Fools and Horses

The actor flew in by helicopter as he visited Diddly Squat Farm Shop.