Home » Oscars producers: ceremony would have been 'impossible' weeks ago

Oscars 2021 will have LONGER speeches and be shot like a movie: Contagion director behind new-look Awards reveals stars will ‘tell a story and say something personal’ – with masks ‘playing very important role in that story’

Producers of this Sunday’s Oscars have warned that speeches may be even longer than before, giving the orchestra a well-earned rest when it comes to drowning out the endless list of thank-you’s.

The 93rd Academy Awards will mark the first time Tinseltown’s finest have assembled in over a year, for a three-hour show that co-producer Steven Soderbergh has described as being ‘like a movie.’

Presenters including Brad Pitt, Harrison Ford and Halle Berry are said to be ‘playing themselves, or at least a version of themselves.’

However, the Contagion director – who has won seven Oscars – also compared producing the ambitious event to ‘trying to build an airplane while it’s in the air.’

The delayed April 25 ceremony takes place barely a week after California opened vaccinations to all over-16s, with infection rates plummeting after a massive winter surge ripped through the state. Movie theaters are even reopening. 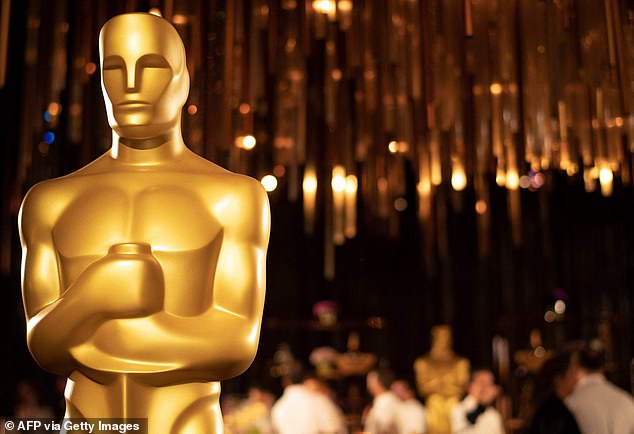 New feel: A ‘teeny-tiny’ red carpet, no invitations for Hollywood’s most powerful moguls, and a ‘central’ role for masks – next weekend’s in-person Oscars are taking no risks when it comes to Covid-19

The people behind the magic: But the event still would have been ‘impossible’ to hold just weeks earlier, producers said Saturday. Seen here are, L to R, Steven Soderbergh, Stacey Sher and Jesse Collins

There is said to be a ‘teeny-tiny’ red carpet and no invitations for Hollywood’s most powerful moguls, while there will be a ‘central’ role for masks – as organizers are taking no risks when it comes to Covid-19.

But the event still would have been ‘impossible’ to hold just weeks earlier, producers said Saturday.

Asked by AFP about the impact of the show’s two-month postponement, Soderbergh, 58, said: ‘It would have been impossible for us to do what we’re gonna do… I don’t know how we would have done it.

‘This is the working definition of trying to build an airplane while it’s in the air,’ the director told a virtual press conference, adding that his experience of making films during the pandemic – and his 2011 thriller Contagion – had proven invaluable.

The ceremony will take place amid the ‘physical grandeur’ of Los Angeles’s cavernous Union Station, with nominees mingling outdoors and then rotated in and out of the venue during the show. 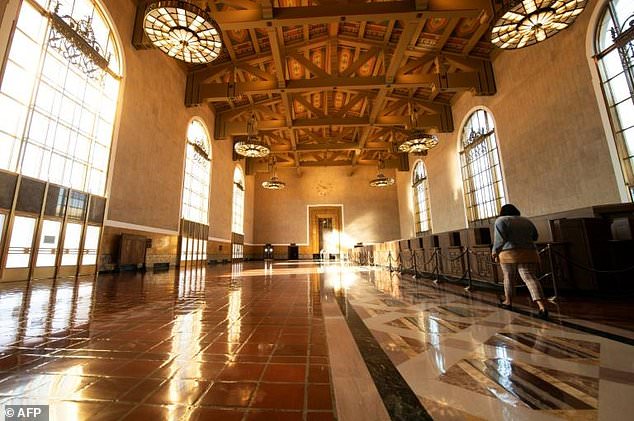 Hot spot: The ceremony will take place amid the ‘physical grandeur’ of Los Angeles’ cavernous Union Station, where nominees will mingle outdoors and be brought into the socially distanced venue in small groups as their categories are announced 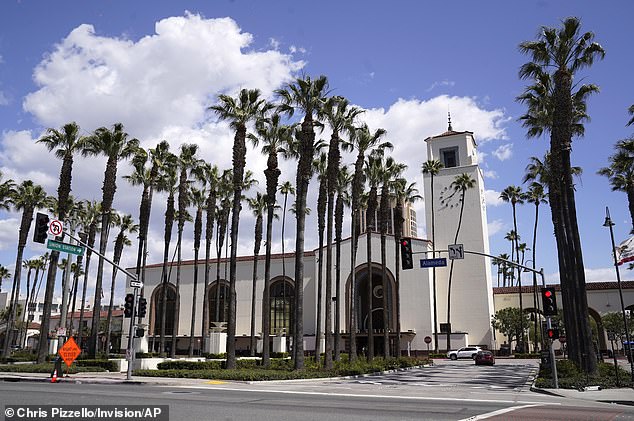 The exterior: The outside of Union Station which has been featured in several films

The traditional red carpet will be dramatically downsized, and the guest list will be so limited that even powerful Disney boss Bob Iger ‘won’t be there,’ said Soderbergh.

Speaking from the venue’s courtyard – where only nominees, their plus ones, and a handful of presenters will chat and drink – Soderbergh said he hopes the Oscars will present the world ‘a glimpse of what’s going to be possible when most people are vaccinated, and rapid, accurate, cheap testing is the norm.’

‘Masks are going to play a very important role in the story of this evening,’ he added. ‘If that’s cryptic, it’s meant to be — but that topic is very central to the narrative.’ 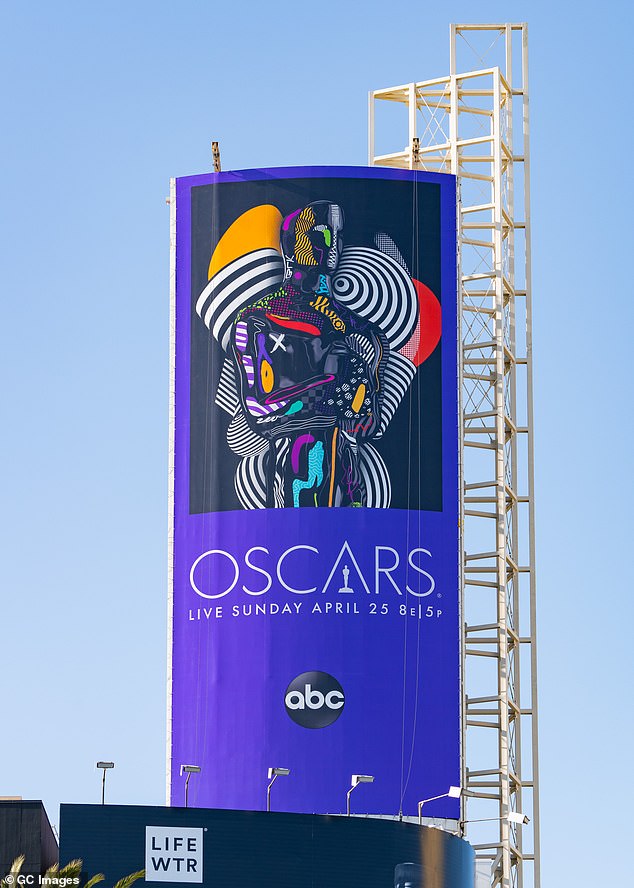 Ready to go: General views of an Oscars billboard at Hollywood and Highland, promoting the 93rd Annual Academy Awards

Soderbergh and fellow producers Jesse Collins and Stacey Sher are keeping many details under wraps, but said the unusual and ‘hopefully unique’ nature of a pandemic-era Oscars ‘certainly opened up an opportunity to try some things that haven’t been tried before.’

The ceremony will have ‘the aesthetic of a film as opposed to a TV show,’ including use of movie-like ‘over-the-shoulder shots from within the audience’ and high-resolution, widescreen formats, said Soderbergh.

Most nominees are expected to attend in person, with hubs in London and Paris set up allowing Europeans unable to travel due to restrictions to dial in – but only via slick, industry-standard satellite hookups, not Zoom.

Recent awards shows have been slammed for their heavy use of remote calling for nominees, particularly after Daniel Kaluuya briefly lost audio as he accepted his Golden Globe for best supporting actor in Judas And The Black Messiah. 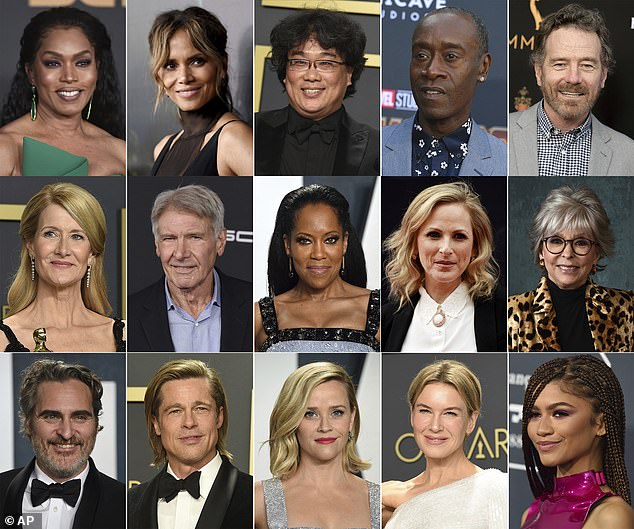 Good list: Previously announced A-list presenters include Harrison Ford, Brad Pitt and Reese Witherspoon, with more set to be unveiled before the show

‘Zoom has been a great thing, we’re on it constantly,’ said Soderbergh. ‘It’s just in the context of this show… that doesn’t really fit.’

Following the awards-show-as-a-movie concept, no host has been announced, but presenters – billed as the ceremony’s ‘cast’ – will be ‘playing themselves, or… a version of themselves.’

Previously announced A-list presenters include Harrison Ford, Brad Pitt and Reese Witherspoon, with more set to be unveiled before the show.

Nominees will be asked to share personal stories, in a show set to make extensive use of interviews.

‘The stories have been incredible, so helpful to us,’ said Soderbergh. ‘And a wonderful archive – a snapshot of movies in 2020.’

Star power: There is said to be a ‘teeny-tiny’ red carpet and no invitations for Hollywood’s most powerful moguls, however A-Listers Brad Pitt and Halle Berry are said to be attending

However, all eyes will be on the viewers figures following the event, which has been on a dangerous slide the past few years.

So far, award shows during lockdown has been proving less than popular with audiences at home, after last month’s Golden Globes suffered one of their worst yet.

Both the Golden Globes and the Grammys this year dropped more than 50% in viewers according to Nielson.

Last year’s Oscars was already a historic low with viewing figured pegged at 23.6million, which TV execs are predicting this year’s figure could be around 12-15million viewers, according to a report by the LA Times.

Ted Harbert, a former president of NBC and ABC, told the outlet last week: ‘I think award shows have got a patina like a candlestick that is 100 years old and all the polish in the world is not going to bring it back.’