Her bright red bathing suit is permanently seared into the minds of fans of her 1990s series Baywatch.

Apparently it’s still a major part of Pamela Anderson’s life too, despite not having worn it onscreen for 20 years.

The 52-year-old actress and activist revealed Saturday to The New York Times that she gets a thrill from surprising her romantic partners with the iconic outfit. 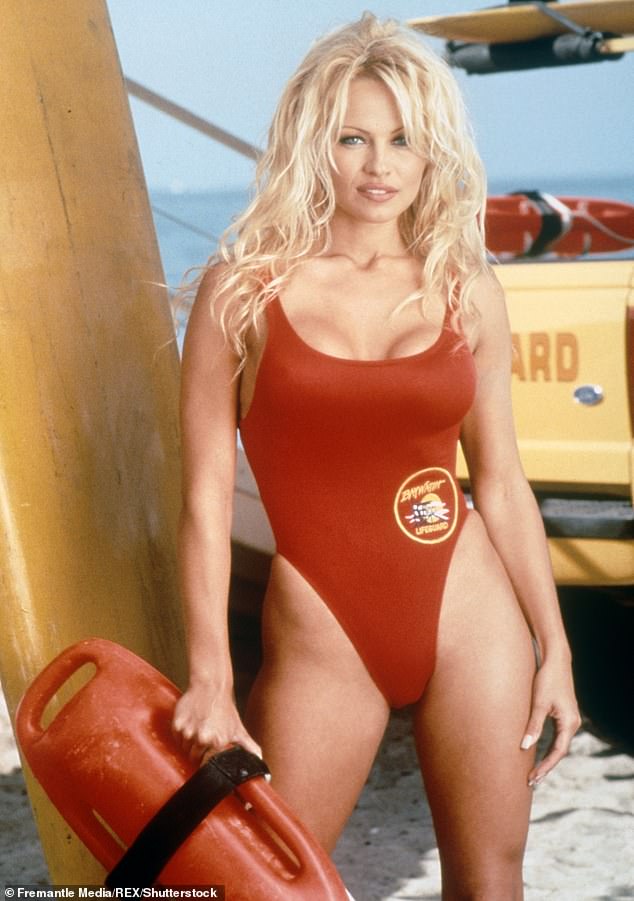 Form fitting: Pamela Anderson, 52, revealed in The New York Times Saturday that she likes to surprise her dates by changing into her old Baywatch swim suit; publicity still from Baywatch

In a style article devoted to the now-iconic look, Pamela said she likes to catch her dates when they’re least expecting it a sopping wet bathing suit.

‘I jump in the shower with a bathing suit and then jump on them wherever they are in the house, soaking wet,’ she said.

The model and actress is probably associated with the scarlet suit more than any of her co-stars.

She was a fixture on Baywatch from 1992–1997 with co-stars David Hasselhoff and Carmen Electra, and also starred in two direct-to-video Baywatch films from 1995 and 1998. 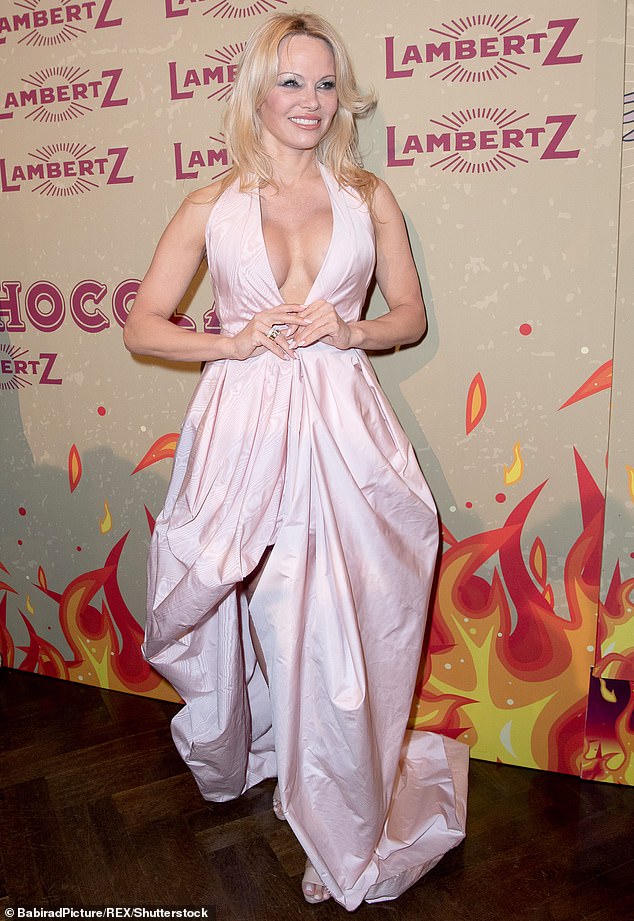 Ice cold: ‘I jump in the shower with a bathing suit and then jump on them wherever they are in the house, soaking wet,’ she said; pictured in January 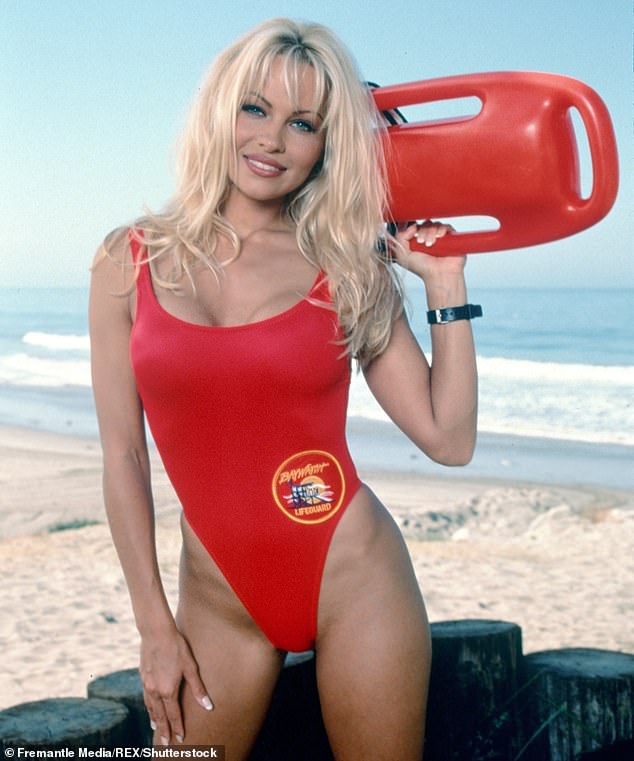 Iconic role: She was a fixture on Baywatch from 1992–1997, and also starred in two direct-to-video Baywatch films from 1995 and 1998 and the 2017 rebooted movie; publicity still from Baywatch

Her character also returned in a much smaller role in 2017 rebooted film, starring Dwayne Johnson and Zac Efron.

The Times’ feature looked back at the history of Baywatch’s wardrobe, and Michael Berk, a creator of the series, told the outlet the wardrobe team ‘never tried to be sexy intentionally’ with the suit.

‘It was all about athletics and functionality. This was also the case with the famous slow-motion run,’ he explained.

And Pamela, who shares sons Brandon, 23, and Dylan, 21, with her ex-husband Tommy Lee, admitted the secret to looking sexy in the one-piece was partly due to the ‘tiny’ size of the garment.

‘Some people bring me bathing suits to sign autographs on and they are these big bathing suits and I say, “Listen, my bathing suit was tiny. It just stretched and pulled onto your body.”‘ 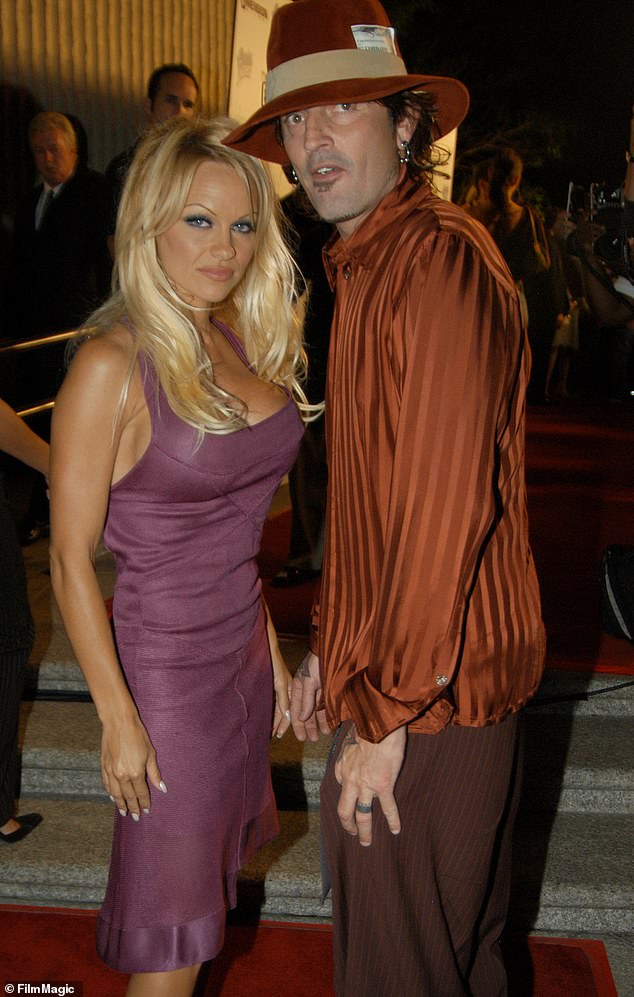 Itsy bitsy: Pamela, who shares sons Brandon, 23, and Dylan, 21, with ex-husband Tommy Lee, admitted the secret to looking sexy in the suit was due to its ‘tiny’ size, which had to be stretched over her body; pictured with Tommy Lee in 2003

The Barb Wire star also weighed in on the current popularity of the one-piece suit over its skimpier rival the string bikini.

‘Maybe it was the people in the bathing suit that made it more exciting,’ she mused, adding that Baywatch represented a time of innocent youth. ‘And we were kind of the California dream.’

Pam’s co-star Nicole Eggbert, who played Summer Quinn, was similarly fond of the suit, saying that it made her feel ‘proud and powerful,’ but wearing it on sunny days for filming had an unfortunate side effect: tan lines.

She recalled it was as if she ‘wore a white one-piece when I was naked all the time,’ she.

Meanwhile, Carmen treats her suit as if it’s a museum piece.

‘I have my suit framed and when people come over to the house, they get really excited, she explained. ‘It just has this effect on people. It was empowering.

It was revealed this month that a feature-length documentary about Baywatch,  which also features David Hasselhoff, Carmen Electra, Nicole Eggert, David Chokachi and Alexandra Paul, is in the works from filmmakers Matthew Felker and Brian Corso.

‘We want to show the audience how it culturally shaped an entire decade,’ said Felker.

‘The look and feel and tone of Baywatch bled into everything ’90s. Baywatch is about as synonymous with a decade as the Kardashians are to today’s current pop culture.’ 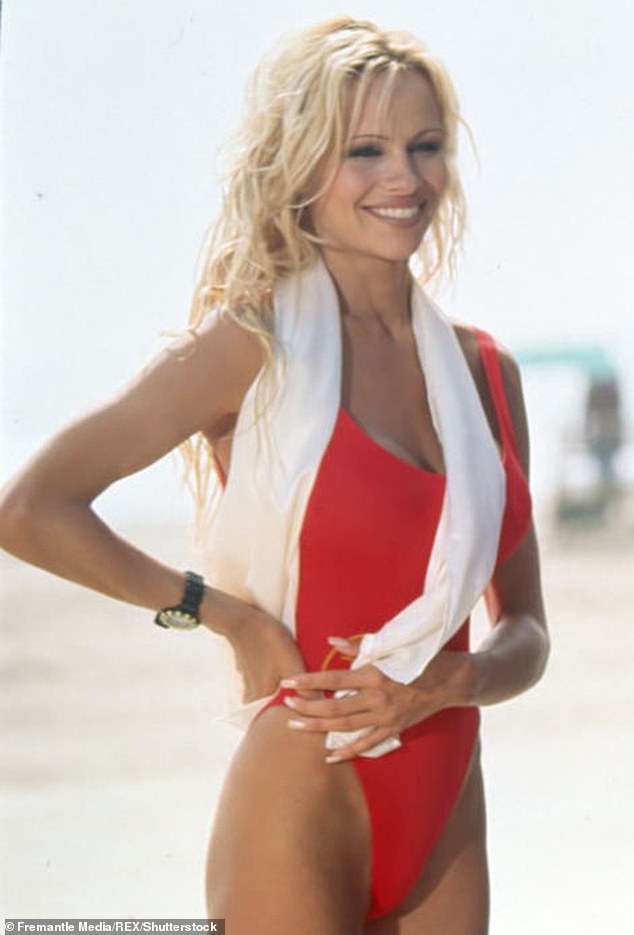 The person makes the clothes: ‘Maybe it was the people in the bathing suit that made it more exciting,’ mused Pam. ‘And we were kind of the California dream.’; still from Baywatch