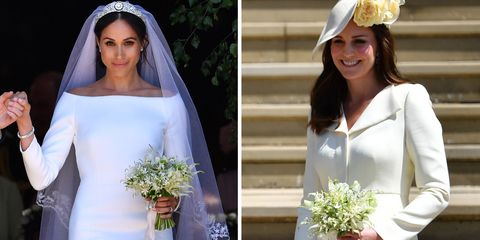 Prince Harry and Meghan Markle’s royal wedding was almost three months ago, but interest in the ceremony has re-ignited after mysterious footage from the ceremony surfaced online. The clip in question shows the bride receiving her bouquet before heading down the aisle at St. George’s Chapel. But there seems to be some confusion about who gave Markle her flowers.

Here, we break down what we know about the bouquet transaction—so you don’t have to.

Videos of Meghan’s entrance appears to show someone handing her the bridal bouquet. Was it Kate?

The shot is far and blurry, so it’s hard to tell exactly who the bouquet attendant was. However, we do know that she stood at the back of the church by the bridal party and was wearing a light-colored dress and hat. (Fast-forward to 2:26 in the video below.)

It was easy to assume that this person was Kate Middleton. She wore a pale yellow Alexander McQueen ensemble and entered with the bridesmaids and page boys because her children, Prince George, and Princess Charlotte, were in the wedding.

However, Kate was already seated at the front of the chapel.

Videos of Meghan’s procession shows that Kate was already at her seat (in the front row next to Duchess Camilla) before the bride even reached the altar.

That means she couldn’t have been the one to give Meghan her bouquet, unless she sprinted the whole length of the chapel before Markle made it down the aisle. (That seems highly unlikely.)

But wait! Kate was seen holding a bouquet after the wedding. Was it Meghan’s?

No, it was Charlotte’s. The princess was seen toting her own flowers down the aisle like her fellow bridesmaids. It seems she eventually passed on the bouquet to her mom after the ceremony.

Plus, Meghan held onto her bouquet and brought it along for the carriage ride.

So who did give Meghan her bouquet?

This is where the real mystery lies. There does appear to be a woman wearing light colors standing by the bridal party after Meghan received her bouquet, but you can’t see her face. However, she does appear to have curly blonde hair, a white dress, and a feathered pink fascinator.

People suggests it could have been Samantha Cohen, the Queen’s former private secretary who’s reportedly putting Meghan through six months of royal training. She did wear a pink fascinator to the royal wedding, however she doesn’t have curly blonde hair.

The video also appears to show that the bouquet handler had an A-line knee-length dress, but Cohen’s dress had a slimmer fit and fell down to her calves.

After the bridal party left to follow Meghan down the aisle, this woman was left standing by the door. She appears to have the pink fascinator and blonde curls from the last photo, along with an A-line white dress from the video.

Could this be Meghan’s mystery bouquet woman?