Pictures taken on the night in question, September 12, 2018, sees Dan grinning and laughing before entering the hotel in which Chloe claims she slept with him – an allegation Dan strongly denies.

The images come as Dan, 28, took to Twitter to like a message from a fan which branded Chloe a ‘sl*g’. 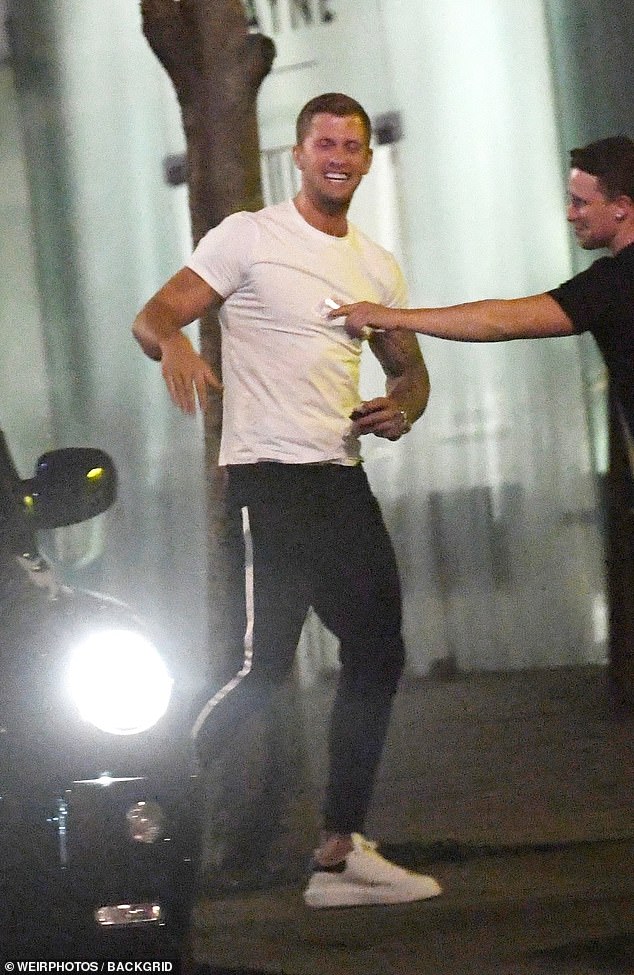 Dan previously hit out at ‘no morals’ Chloe, 22, after she told The Sun she enjoyed a steamy sex session with him and Natalie, 34, last year. 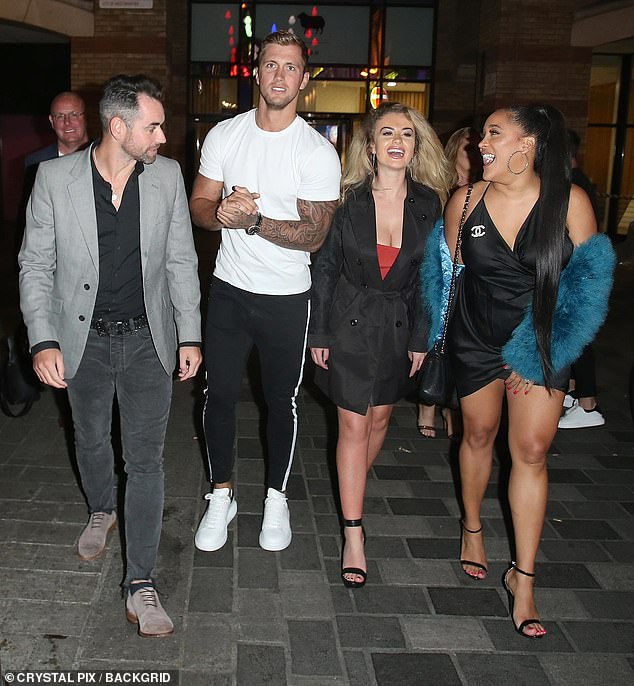 Not impressed: The images come as Dan, 28, took to Twitter to like a message from a fan which branded Chloe a ‘sl*g’

In her interview, Chloe claimed Dan had sex with American reality star Natalie, before getting intimate with Chloe – after the group had ‘let loose’ during a ‘debauched’ evening.

Chloe said: ‘I feel so sorry for Jacqueline. She deserves to know what Dan is. He’s making a fool of her. He should be faithful to his wife. 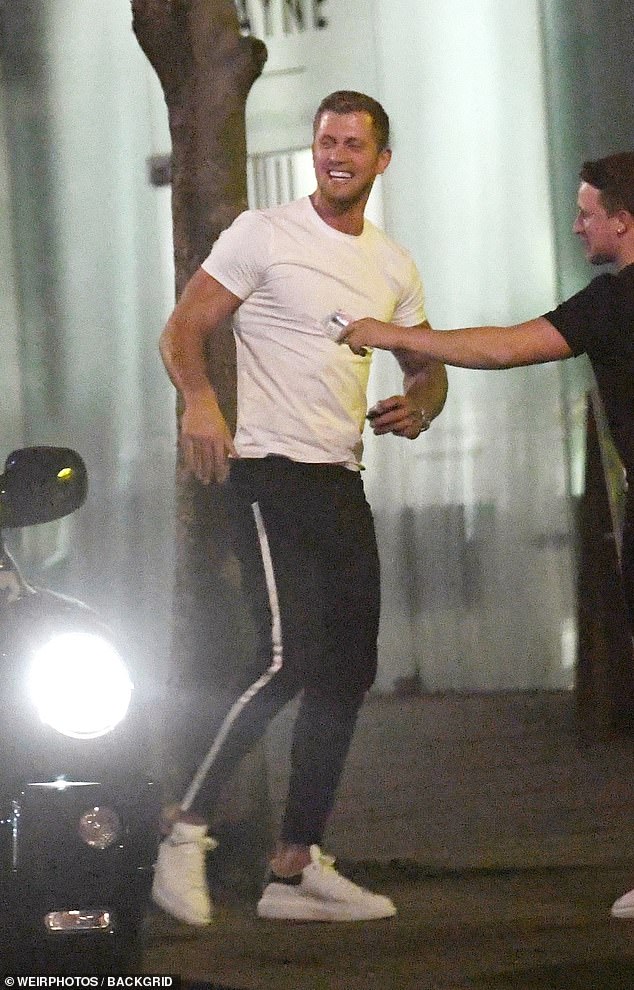 Chirpy: Pictures taken on the night in question, September 12, 2018, sees Dan grinning and laughing before entering the hotel in which Chloe claims she slept with him

Chloe – who rose to fame after being kidnapped in Italy in a case that shocked the world in 2017 – said the group had partied in the capital before returning to Natalie’s room at the St Martin’s Lane hotel around 3am.

She claimed Natalie had said she wanted to have sex with Dan during the night out and ‘tried it on’ with him when they got to the room – after drinking alcohol in the room and hotel lobby.

Chloe was single at the time while Natalie has been married to American football player Jacob Payne since 2012.

However, since the news broke, Jacob has reported dumped the Bad Girls Club TV personality. 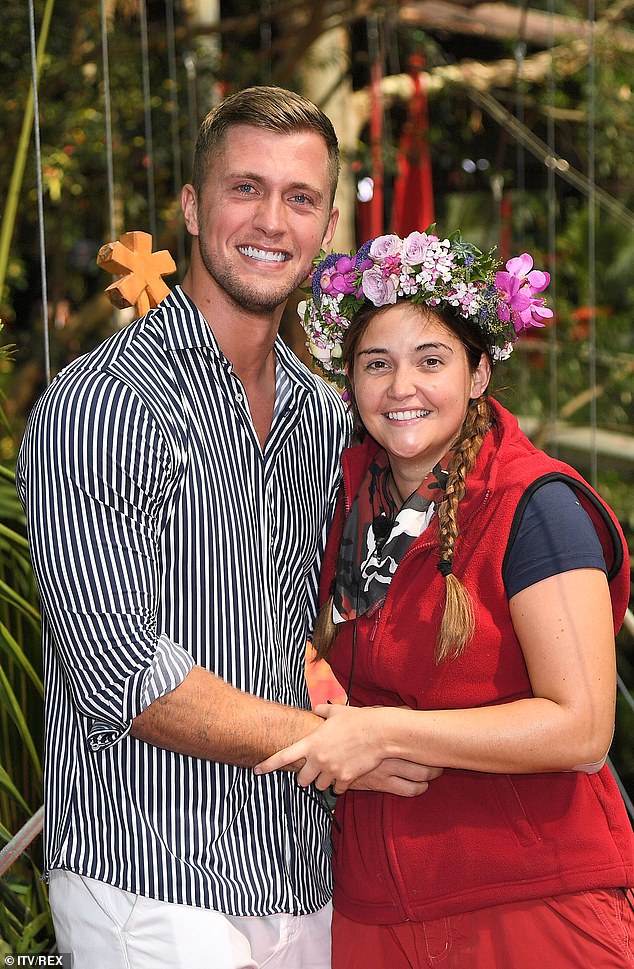 Victorious: Chloe made the allegations last week, whilst Dan’s wife Jacqueline competed in I’m A Celebrity… Get Me Out Of Here! since coming out she has refused to give TV interviews

Chloe made the allegations last week, whilst Dan’s wife Jacqueline competed in I’m A Celebrity… Get Me Out Of Here!

After being crowned Queen Of The Jungle on Sunday Jacqueline became the first winner in the show’s history to cancel live TV and newspaper interviews.

There were also reports campmates Myles Stephenson, 28, told Jacqueline his ex-girlfriend Gabby Allen, 25, did have a fling with her husband while they were in the jungle.

A spokesperson for I’m A Celebrity told MailOnline: ‘Jacqueline wants to spend as much time as possible with her family in OZ before they have to travel back to the UK. Plus she’s filming Coming Out.’

The actress’ marriage two-year marriage has been chequered with allegations of Dan cheating on her.

In March, Dan denied claims he had kissed Love Island’s Alexandra Cane behind Jacqueline’s back and a month after that, he also denied a fling with his PR pal Steph Ledigo.

And in 2015, he spoke of his regret over staying at his ex Megan’s house (the mother of his son, Teddy) as this led to cheating rumours.

The Only Way Is Scandal: A look back at Dan’s personal woes