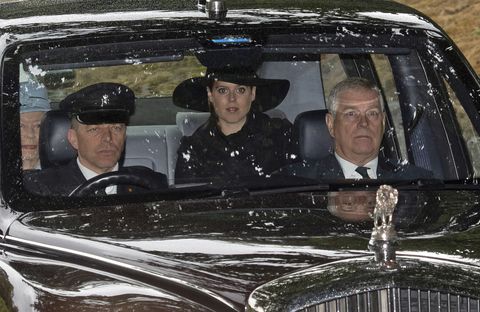 Every summer, the Queen leaves Buckingham Palace in London and heads north to her Balmoral estate in Scotland, often with members of her family in tow. Just this weekend, Princess Beatrice was photographed traveling to church alongside her father, Prince Andrew, and The Queen, People reports. They were heading to a service at Crathie Kirk on the estate, and Lady Louise Windsor, daughter of Prince Edward and Sophie Wessex, traveled with them but in a separate car.

Princess Beatrice had an eventful week, celebrating her 30th birthday just last Wednesday. Her sister, Princess Eugenie, shared old photos on Instagram as a sweet tribute. Beatrice will serve as maid of honor for Eugenie’s wedding this October.

Happy 30th birthday to you Beatrice… what an amazing sister you are and we are so proud of the person you have become!

Happy 30th birthday to you Beatrice… what an amazing sister you are and we are so proud of the person you have become!

According to the Daily Mail, the Queen arrived at Balmoral last Monday. Balmoral, located in Aberdeenshire, has been in the family since it was bought for Queen Victoria more than 160 years ago, and the Queen has visited ever since she was a child. There are now around 150 buildings on the estate, which covers around 50,000 acres.

The Queen and Prince Philip are expected to stay at Balmoral until early October. It’s a tradition for royals to stop by, and it’s also tradition for the Prime Minister to visit in September. Prince Harry and Duchess Meghan are expected to pay a visit sometime this month, and Prince William and Kate Middleton will also travel to Balmoral at some point. They usually go in September, but may make the trip earlier this year because of Prince George and Princess Charlotte’s school schedules.