Princess Beatrice, granddaughter to Queen Elizabeth II, is expecting her first child with her husband, Edoardo Mapelli Mozzi, this fall.

Buckingham Palace announced the news Wednesday, noting that “the Queen has been informed and both families are delighted with the news.”

Mozzi, the 37-year-old CEO of architecture/design studio Banda Property, is father to a young son, Wolfie, from a previous relationship with American architect and designer Dara Huang.

The pregnancy announcement comes nearly a year after Beatrice, the 32-year-old elder daughter of Prince Andrew, wed Mozzi in a private, low-key ceremony amid the coronavirus pandemic at The Royal Chapel of All Saints at Royal Lodge, Windsor. They were joined by close family including Beatrice’s grandparents, Queen Elizabeth and the late Prince Philip. 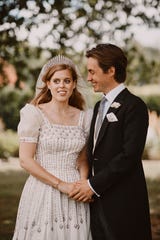 Princess Beatrice and Edoardo Mapelli Mozzi pose for a photo after their wedding at The Royal Chapel of All Saints at Royal Lodge, Windsor, England. (Photo: Benjamin Wheeler, AP)

“The wedding took place in accordance with all relevant Government Guidelines,” a palace statement at the time said.

According to BBC News and People, the ceremony was attended by about 20 guests, including Beatrice’s father, Prince Andrew.

The couple were set to be married on May 29 at the Chapel Royal in St. James’s Palace, with a private reception hosted by Queen Elizabeth II for the newlyweds in the gardens at Buckingham Palace. But in early May, Beatrice postponed the royal wedding amid the pandemic, a person familiar with the situation but not authorized to speak publicly said at the time.

The couple got engaged in September 2019 while on vacation in Italy.

After their engagement announcement, the property tycoon posted photos on his Instagram account with a sweet caption: “You will never be alone my love, my heart is your home. Hand in hand, today, tomorrow and forever.”

Beatrice’s pregnancy announcement also coincides with Prince Harry and Duchess Meghan’s third wedding anniversary, which they are celebrating as residents of Southern California after announcing last January they would be “stepping back” as senior members of the royal family.

Queen Elizabeth has 10 great-grandchildren, spanning from Prince William and Duchess Kate’s 7-year old son George (third in line to the throne) to Zara and Mike Tindall’s 2-month-old son. Harry and Meghan are also expecting a baby girl, they first announced on Valentine’s Day.