On Saturday,  he questioned his own adequacy as a father after revealing his only son Daniel, a serving police officer, had been charged with cocaine possession, and had since been admitted to a clinic for ''very serious'' mental health issues.

Daniel Hadley, 28, was arrested Friday night for possession of .79 of a gram of cocaine, worth $200, while off duty at a hotel in Rouse Hill following an investigation by officers from the Professional Standards Command. 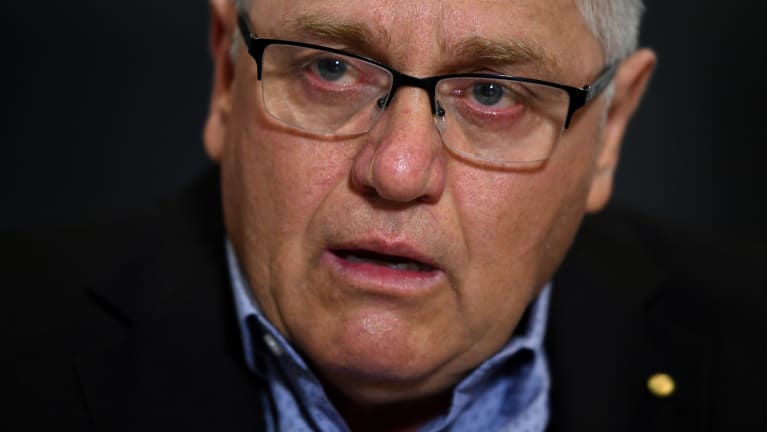 A shattered Ray Hadley addresses the media on Saturday.

The senior constable, who is attached to the North West Metropolitan region, has been suspended from duties and his employment status is being reviewed, a police statement said.

''When I was first told I was angry and perplexed,'' Ray Hadley said, reading from a statement and taking no questions, his eyes rimmed red as he choked with emotion.

''I had no idea my son, a respected police officer, would be involved in such a matter. I brought Daniel back to my home and my anger turned to shock and sadness.

''My son revealed to me he's been having mental health issues for some time. The serious nature of his illness is such that he has been admitted to a clinic immediately.''

Hadley said his son had dislocated his knee on duty some time ago, and was waiting on surgery for a hernia. Seven years as a police officer ''have had a dramatic impact on him''.

''All the time his colleagues and I were thinking he was coping and he wasn't,'' Ray Hadley said. He added that his son accepted responsibility for his behaviour but ''is not in control of his mental health''.

''I now know how many parents feel when they think things are OK when they're not.

''I feel particularly inadequate as a father and a spokesman for RU OK Day when in fact my son was not OK.''

Hadley's voice cracked when he went off script to add: ''I love him dearly. I wish to God he'd come to me before this.''

In 2014 at the height of their marriage breakdown, former wife Suzanne had applied for an apprehended violence order gainst Hadley and his son only to withdraw it the next day. Hadley revealed he had been absent father when his children were growing up, often working Christmas Day and phoning in as they opened presents.

Two years earlier, NSW Police investigated a complaint from a 17-year-old boy relating to the 2GB presenter and his son over a boisterous birthday party at the Hadley home.