‘Managed to cram them into there didn’t I!’ Rhian Sugden sets pulses racing in a TINY purple lingerie set as she shares new very racy snap

Rhian Sugden set pulses racing on Monday as she shared a new racy snap to Instagram.

The 35-year-old glamour model looked incredible as she wowed in a tiny purple silk lingerie set.

Rhian displayed her very ample assets in a plunging bustier top and highlighted her toned torso in matching thong bottoms. 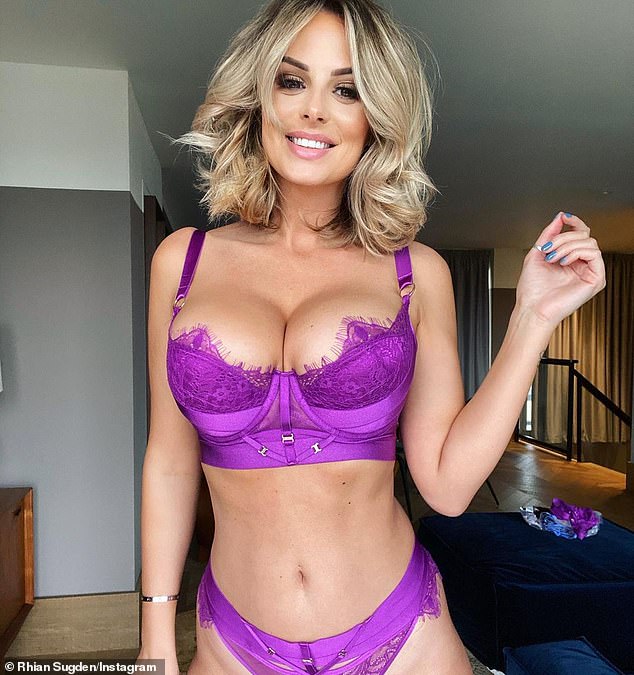 Rhian styled her blonde locks into a curly blow-dried hairdo and added a slick of glamorous make-up to enhance her pretty features.

The model knew how to work her best angles as she posed up a storm in the revealing lingerie.

Writing a tongue-in-cheek caption, Rhian quipped: ‘Say squeeze [lemon emoji] Managed to cram them into there didn’t I? Gorgeous set from @honeybirdette.’

Cheeky! The 35-year-old glamour model looked incredible and she wrote a tongue-in-cheek caption alongside the snap

It comes after Rhian took to Instagram on Friday to share a defiant snap about ‘body confidence’ and ‘self-love’.

The 35-year-old glamour model looked incredible in a sheer purple lingerie set with orange detailing on it.

Wearing a plunging bra and thong bottoms, Rhian beamed to the camera as she insisted that ‘rolls are normal’. 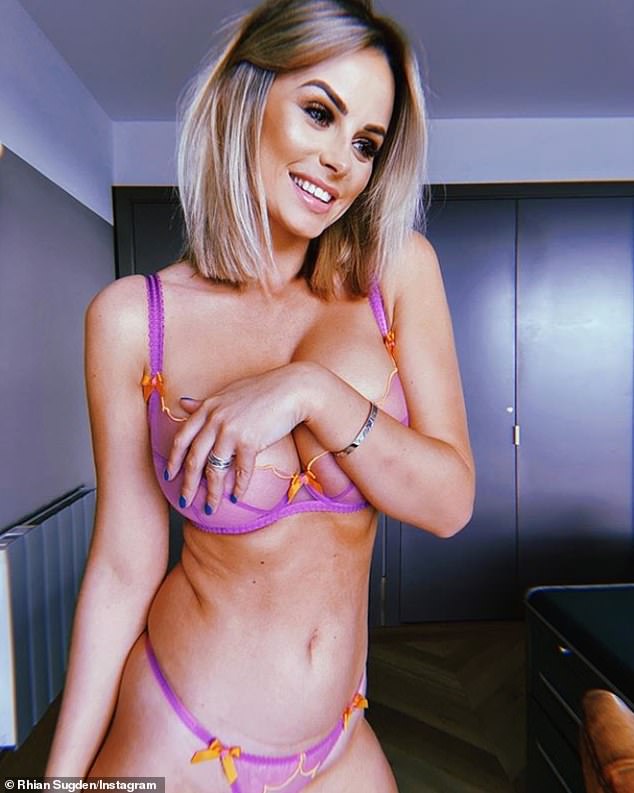 Defiant! It comes after Rhian took to Instagram on Friday to share a defiant snap about ‘body confidence’ and ‘self-love’

The former Page 3 model wrote a heartfelt caption alongside the photo as she hit back at trolls, who claimed she had ‘gross fat rolls’ and even cruelly branded her a ‘saggy cellulite queen’.

Rhian also reflected on her IVF journey and said that her figure had changed since treatment but she was celebrating body confidence.

She penned: ‘Eat donuts and be happy. Some people will probably say it’s really easy for me to talk about body confidence but sometimes we all lack it.

‘Since going through a few rounds of IVF my body shape has changed. I’ve become curvier than I used to be and I’m a little squishier round the mid section. 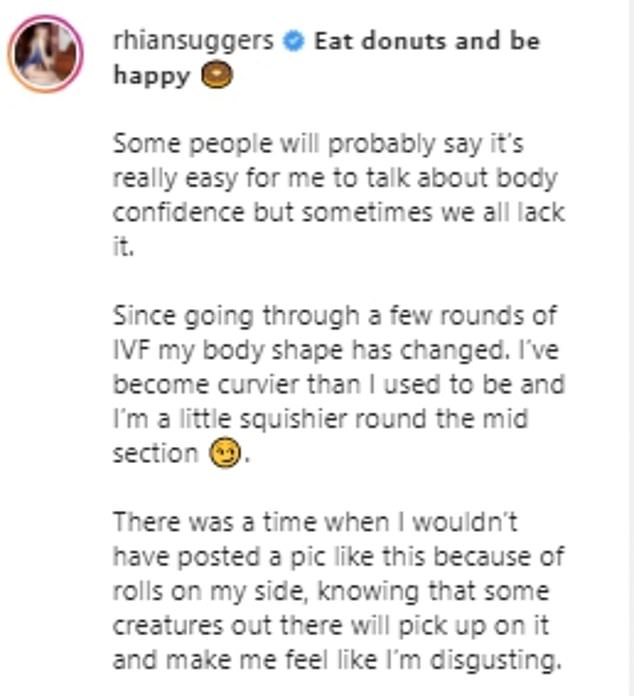 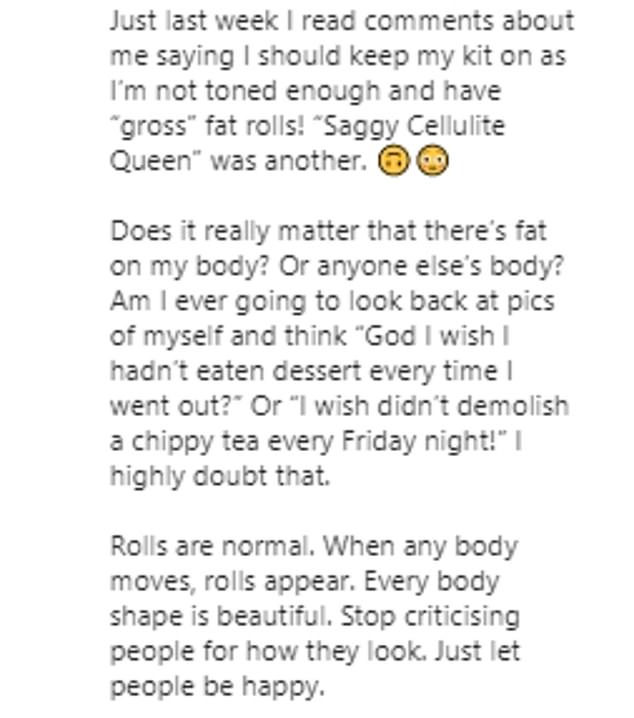 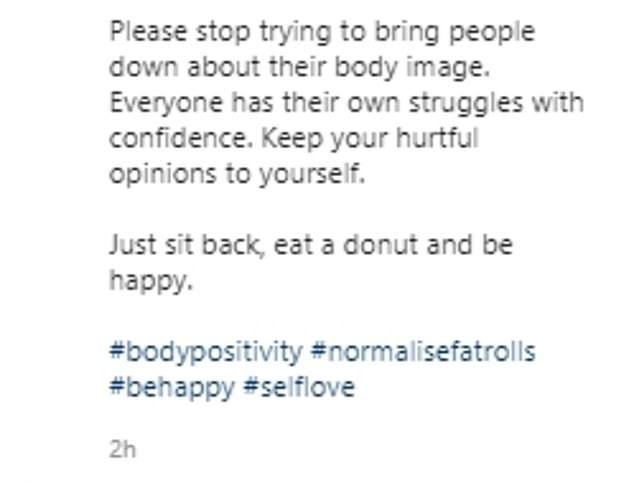 Body confidence! The 35-year-old glamour model wrote a heartfelt caption alongside the photo as she hit back at trolls, who claimed she had ‘gross fat rolls’ and even cruelly branded her a ‘saggy cellulite queen’

‘There was a time when I wouldn’t have posted a pic like this because of rolls on my side, knowing that some creatures out there will pick up on it and make me feel like I’m disgusting.’

Hitting back at trolls, Rhian continued: ‘Just last week I read comments about me saying I should keep my kit on as I’m not toned enough and have ”gross” fat rolls! ”Saggy Cellulite Queen” was another.

‘Does it really matter that there’s fat on my body? Or anyone else’s body? Am I ever going to look back at pics of myself and think ”God I wish I hadn’t eaten dessert every time I went out?” Or ”I wish didn’t demolish a chippy tea every Friday night!”

‘I highly doubt that. Rolls are normal. When any body moves, rolls appear. Every body shape is beautiful. Stop criticising people for how they look. Just let people be happy. Please stop trying to bring people down about their body image.’ 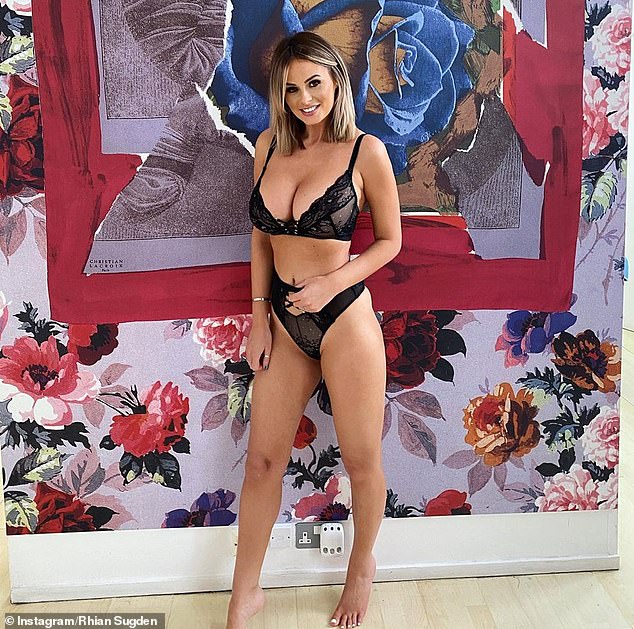 Self-love: Rhian also reflected on her IVF journey and said that her figure had changed since treatment but she was celebrating body confidence

She signed off her message with: ‘Everyone has their own struggles with confidence. Keep your hurtful opinions to yourself. Just sit back, eat a donut and be happy. #bodypositivity #normalisefatrolls #behappy #selflove.’

Earlier in October, Rhian told how she was left feeling ’embarrassed’ as she suffered from hyperpigmentation during her second attempt IVF, which she claimed caused her ‘freckles to quadruple’.

Alongside her detailed message, the former CBB star caught the eye as she posed in a sheer black lingerie set by Pour Moi for a typically racy photo.

Referencing one of the side effects of IVF, the TV star, who had endured gruelling treatment for 18 months, said: ‘Keep calm and freckle on.. I always used to love my freckles and always been happy to wear minimal makeup to show them off. 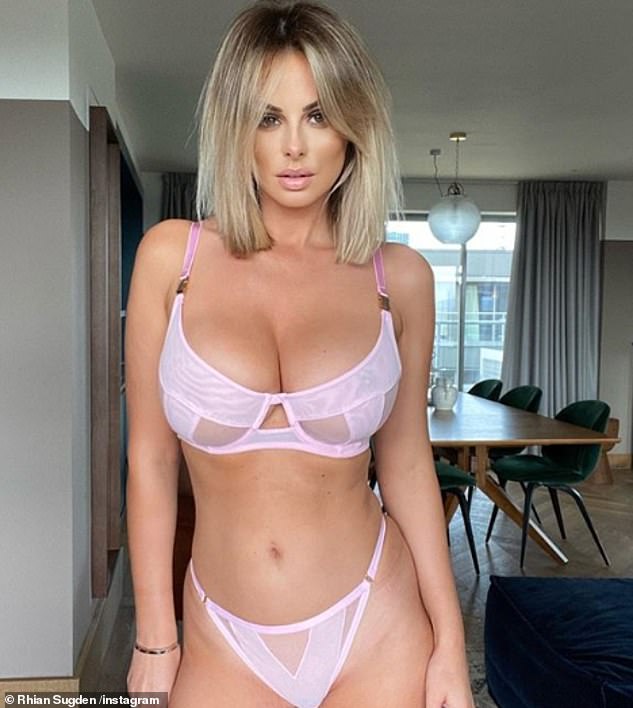 Too glam to give a damn: She signed off her message with: ‘Everyone has their own struggles with confidence. Keep your hurtful opinions to yourself. Just sit back, eat a donut and be happy. #bodypositivity #normalisefatrolls #behappy #selflove.’

‘However during my second (failed) round of IVF last year my freckles quadrupled and took over my face. It now looks like I have awful sun damage and I’ve been so embarrassed by it.

‘Little did I know that hyperpigmentation is a side affect of the IVF and the hormones that I injected.’

The media personality went on to reveal people had accused her of ‘ruining her skin with sun damage’.

Rhian elaborated: ‘For the last year people have picked up on my darkening freckles that have appeared under my eyes.

‘I’ve received comments telling me it’s made me look older and that I’ve ruined my skin with sun damage… so I ended up spending a small fortune on treatments to try and shift it – and failed. 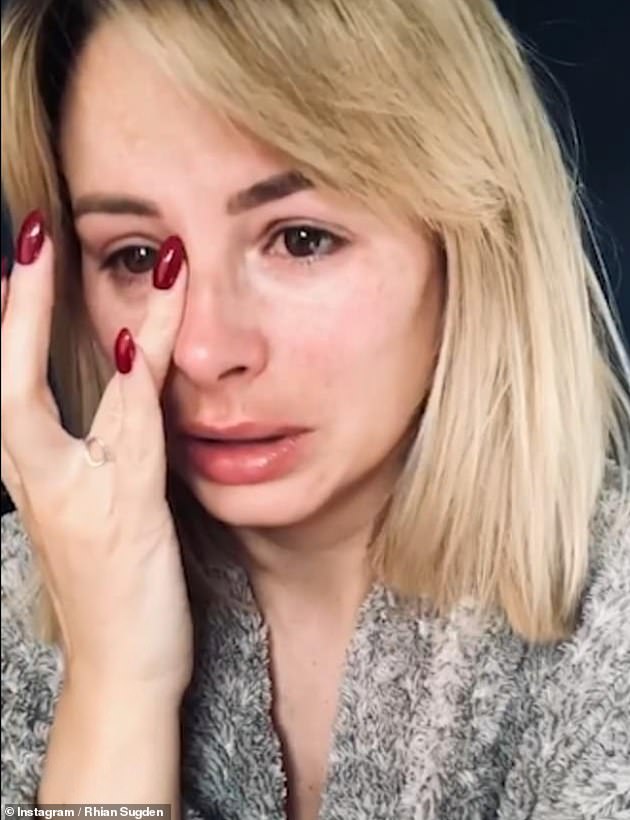 Challenges: Earlier in October, Rhian told how she was left feeling ’embarrassed’ as she suffered from hyperpigmentation during her second attempt IVF, which she claimed caused her ‘freckles to quadruple’

‘Only to realise it’s actually caused by an increase in oestrogen which happens during fertility treatment and/or pregnancy. Something I had no idea about.

‘It’s funny what affect other people’s opinions can have on you. Even when they’re from people we don’t even know, we still get affected and it’s made me so insecure.’

The blonde ended her post by insisting that while she’s sure ‘more freckles will appear’ when she commences her third attempt of IVF, she’s started to embrace her appearance.

She said: ‘Round 3 is looming which probably means even more are due to appear… One of my friends said it looks like a super hero shaped mask has formed under my eyes because I’m a fertility warrior… which from now on, I shall be owning #ttccommunity #ttc #ivfwarrior #frecklesfordays.’ (sic)

After discovering that she wouldn’t be able to conceive naturally and has the egg count of ‘a woman over 45’, she and her actor husband went through two rounds of IVF.

They were given the devastating news just before Christmas that their second cycle of treatment in November 2019 had failed.

Earlier this year, Rhian created a natural tanning range after medics told her to avoid cosmetics with nasty chemicals to give herself the best chance of falling pregnant.

The Bury native even hired an alternative therapies specialist and became much more conscious of her product choices.

Her third round was initially delayed due to the coronavirus pandemic, and she bought Roger the Cavapoo, who helped console her during her journey, in July. 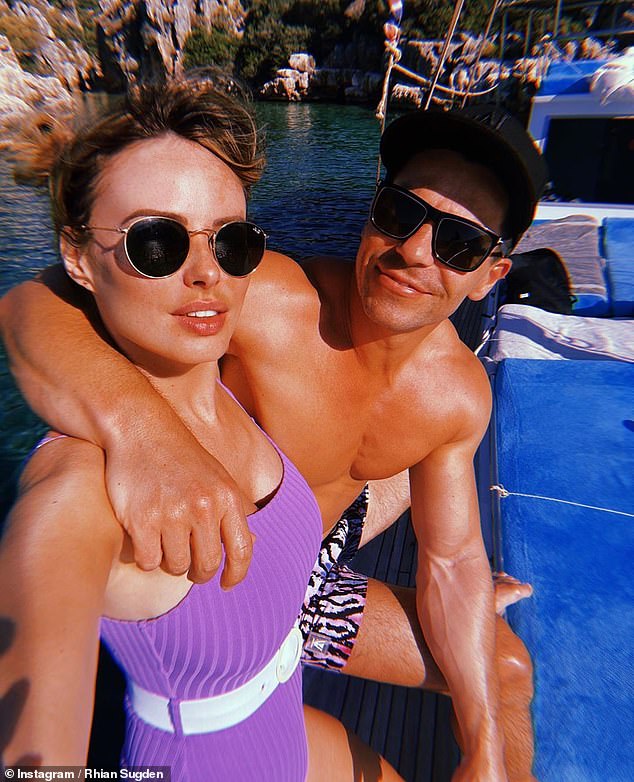 Struggles: After discovering she can’t conceive naturally and has the egg count of ‘a woman over 45’, the glamour model went through two rounds of IVF, which failed (pictured with husband Oliver Mellor on holiday in Turkey earlier in the summer)