‘I do not care about my physical body’: Ricky Gervais reveals he wants lions to EAT his corpse after his death

Ricky Gervais has revealed that he wants lions to eat his corpse after death.

The comedian, 59, admitted that rather than an official burial he hoped his body would be torn apart at a zoo in front of horrified visitors.

Speaking to the Daily Star, he said: ‘I do not care about my physical body. Feed me to the lions… 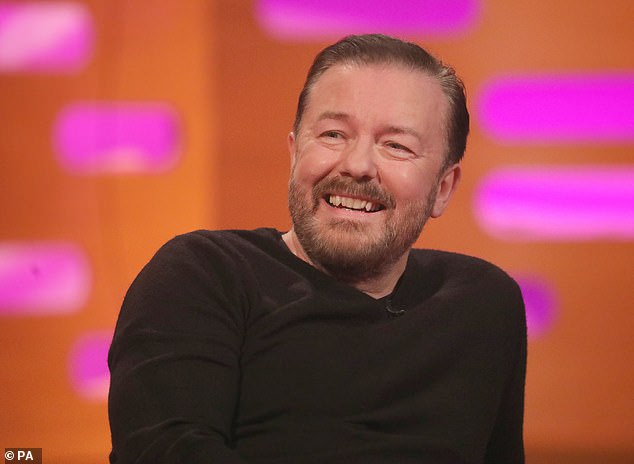 Bizarre: Ricky Gervais has revealed that he wants lions to eat his corpse after death as he does not care about his physical body

‘Me just being thrown into the lions’ cage at the zoo and people – all tourists – going “Is that the bloke from The Office?” and then they see the lions chewing me.

‘I like the idea of the two lions eating me and they go for the soft bits first and they have got a testicle each – and they are about six feet apart.’

‘It will be like Lady And The Tramp. Just two lions just chewing my testicles. Brilliant.’

Ricky has previously insisted that he is not scared of dying and said: ‘Roll on death. It’s going to happen, isn’t it? 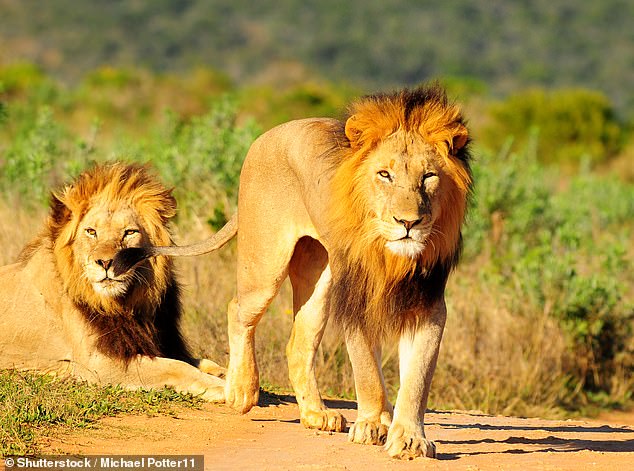 Wild: The comedian, 59, admitted that rather than an official burial he hoped his body would be torn apart at a zoo in front of horrified visitors

‘There’s nothing wrong with being dead. The best thing about being dead is that you don’t know about it.’

The bizarre revelation comes after Ricky slammed ‘cancel culture’ as he defended the use of free speech in a recent interview.

The After Life star, who delivered a series of controversial gags at the 77th Golden Globes awards ceremony back in January, described ‘wokeness’ as ‘a weird sort of fascism’ amid calls for ‘the free exchange of information and ideas’.

He said: ‘There’s this new weird sort of fascism of people thinking they know what you can say and what you can’t and it’s a really weird thing. Just because you’re offended it doesn’t mean you’re right.’ 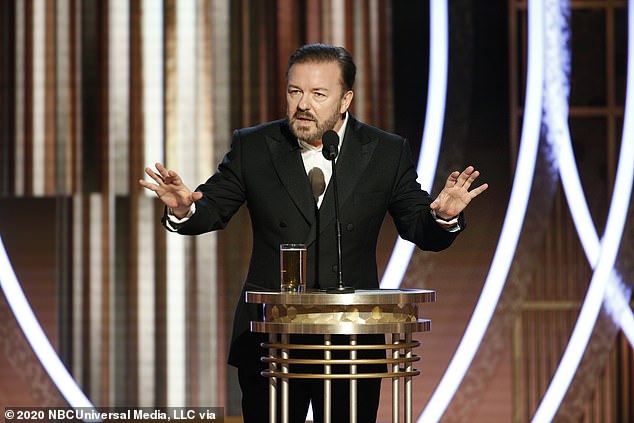 ‘Just because you’re offended it doesn’t mean you’re right’: Ricky Gervais slammed ‘cancel culture’ as he defended the use of free speech in a recent interview (pictured in January)

The media personality said on talkRadio earlier this month: ‘There’s this new trendy myth that people who want free speech want to say awful things all the time.

‘If you’re mildly conservative, you’re Hitler and if you’re centrist and you look at both arguments, you’re a coward. Just because you’re offended it doesn’t mean you’re right.’ 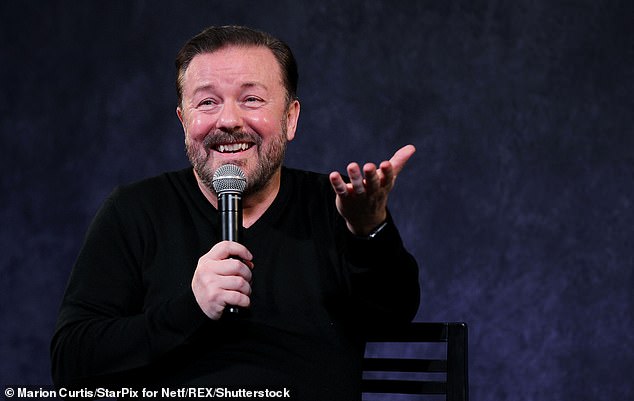 ‘There’s this new trendy myth that people who want free speech want to say awful things all the time’: The After Life star described ‘wokeness’ as ‘a sort of fascism’ (pictured in 2019) 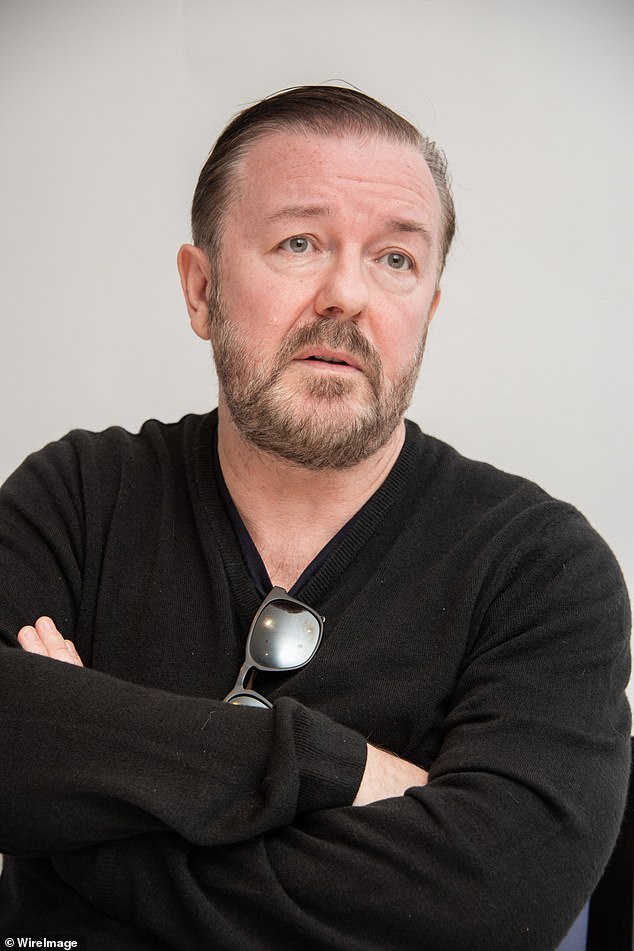 ‘If you’re mildly conservative, you’re Hitler’: The writer shared his thoughts on online shaming amid calls for ‘the free exchange of information and ideas’ (pictured in March)

A few days earlier, the actor said his hit TV show The Office would struggle to air today due to online ‘outrage mobs’.

The screen star, who played David Brent in the BBC mockumentary, said broadcasters are now too afraid to take risks when it comes to content.

The programme, set at a paper firm in Slough, Berkshire, sees the character frequently insult minorities as he grapples with political correctness.

Yet The Office, which aired from 2001 to 2002, won numerous Baftas and Golden Globes and is widely seen as one of the best British comedies ever made. 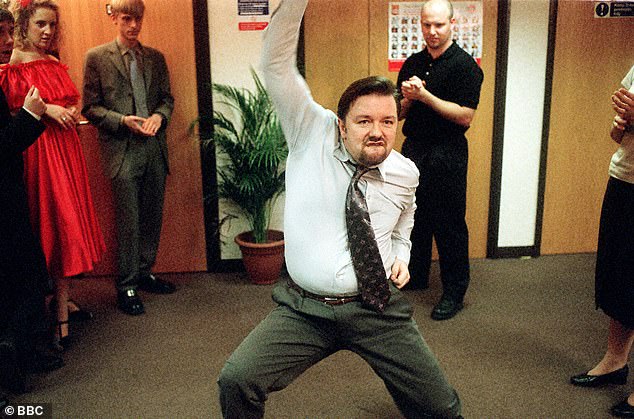 ‘They take things out of context’: A few days earlier, the actor said his hit TV show The Office (pictured as David Brent) would struggle to air today due to online ‘outrage mobs’

Ricky said viewers see Brent as a joke and are not laughing with him, but he fears any sense of irony is lost on audiences today.

What does ‘cancel culture’ mean?

Cancel culture is a new phrase to describe a mob mentality to boycott certain products, people or programs.

It is most commonly associated with people who have caused offence through their actions or through something they have said.

But the concept has grown particularly prevalent over the past five years and is making it ‘difficult’ for comedians in particular – given certain comedic tropes have not aged well.

From the time #TaylorSwiftIsOverParty began trending on Twitter to JK Rowling being ‘cancelled’ for her divisive views on transgender people, the process involves refusing to celebrate or acknowledge a person or their work.

He told Times Radio: ‘Now [The Office] would suffer because people would take things literally. There are these outrage mobs who take things out of context.

‘This was a show about everything — it was about difference, it was about sex, race, all the things that people fear to even be discussed or talked about now, in case they say the wrong thing and they are cancelled.

‘The BBC have got more and more careful, people want to keep their jobs, so would worry about some of the subjects and jokes, even though they were clearly ironic and we were laughing at this buffoon being uncomfortable around difference.

‘I think if this was put out now, some people have lost their sense of irony and context.’

His comments came on the 19th anniversary of The Office, which was also turned into a Christmas special in 2003 and a 2016 film spin off David Brent: Life on the Road.

In February, Ricky spoke out against the stars who used their acceptance speeches to lecture about politics, human rights and animal welfare at this year’s Academy Awards.

The funnyman took to Twitter saying he ‘tried to warn’ the A-list stars not to preach, while viewers watching at home called the event the ‘wokest Oscars ever’.

He wrote: ‘I have nothing against the most famous people in the world using their privileged, global platform to tell the world what they believe. I even agree with most of it.

‘I just tried to warn them that when they lecture everyday, hard working people, it has the opposite effect. Peace.’

Last week, a group of public figures signed a letter which hit out at ‘cancel culture’ after JK Rowling was accused of ridiculing women being called ‘people who menstruate’. 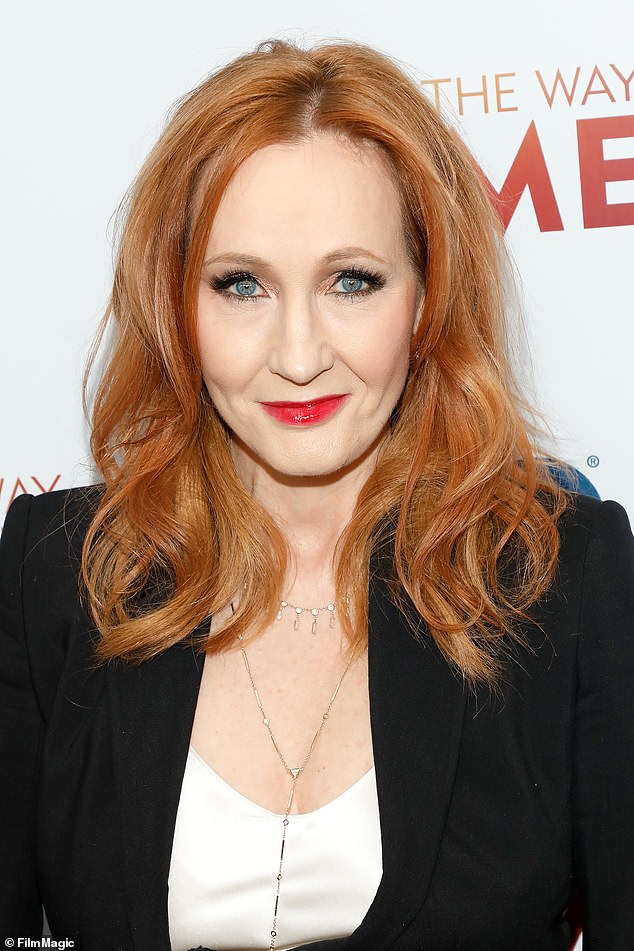 Taking a stand: Last week, a group of public figures signed a letter which hit out at ‘cancel culture’ after JK Rowling (pictured in 2019) was accused of transphobia

She told the BBC: ‘There are a lot of writers, artists and journalists who are afraid of approaching certain subjects, afraid of crossing lines or even lacking sufficient zeal for particular subjects because they’re afraid of their peers.’

Margaret, the author of The Handmaid’s Tale, added her name despite publicly disagreeing with the Harry Potter author. 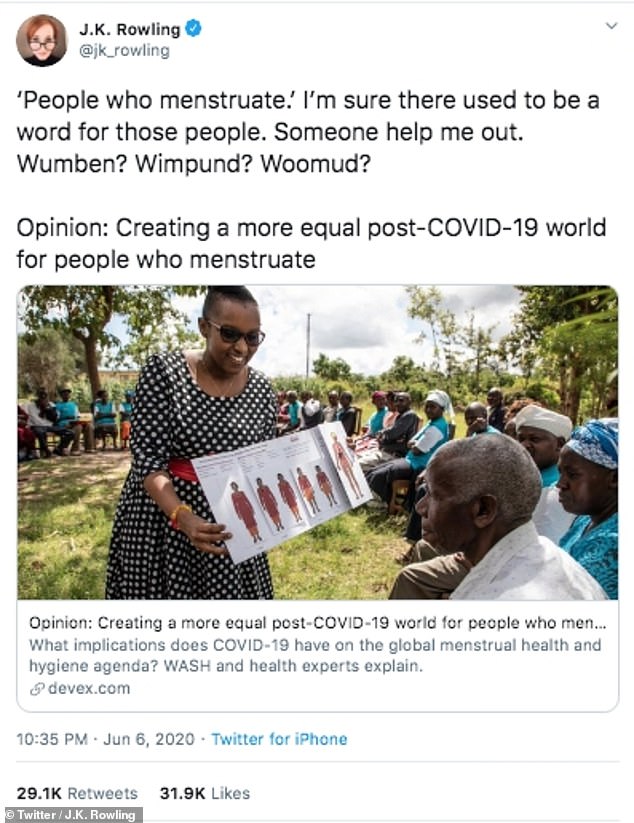 Controversy: The Harry Potter author, 54, was criticised for ridiculing women being called ‘people who menstruate’ in a tweet shared last month

The letter has been supported by household names from the left and right-wings of the political spectrum who have united around the cause.

The document, published in Harper’s, calls for: ‘The free exchange of information and ideas, the lifeblood of a liberal society, is daily becoming more constricted and demands that they want to uphold the value of robust and even caustic counter speech from all quarters.’

It adds: ‘It is now all too common to hear calls for swift and severe retribution in response to perceived transgressions of speech and thought.’ 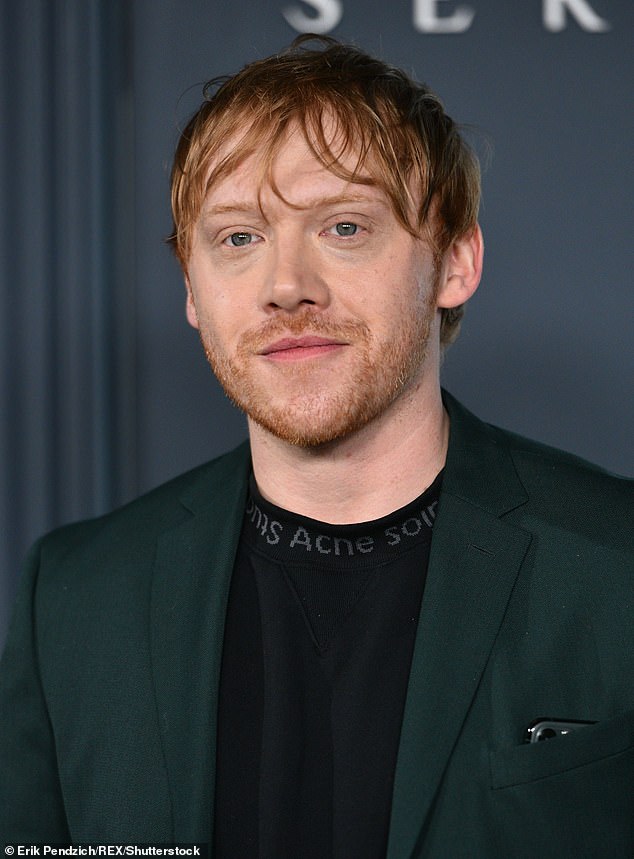 Speaking out: Her remarks sparked backlash from a range of her former Harry Potter castmembers including Rupert Grint, 31 (pictured in 2019) and Emma Watson