She’s currently enjoying an extended working trip to Sydney, where she’s serving as a mentor on the latest season of The Voice Australia.

And Rita Ora was sure to set pulses soaring as she showed off her enviable figure in a slew of racy snaps she shared via Instagram on Tuesday.

The singer, 30, looked sensational while posing in a revealing black midi dress that had side-panel cage detailing to give fans a glimpse at her slender frame. 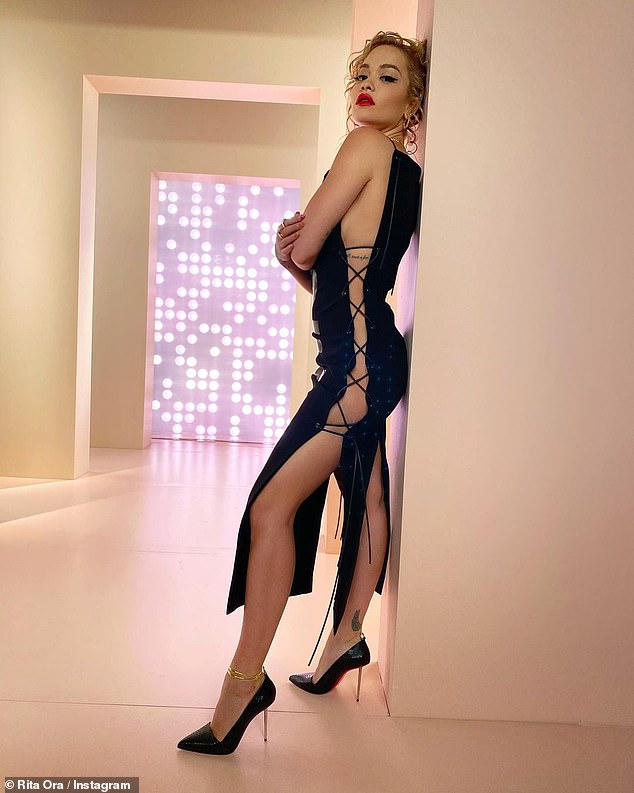 Wow! Rita Ora set pulses soaring as she showed off her sensational figure in a black midi dress with side-panel cage detailing in racy snaps she shared on Instagram on Tuesday

Rita boosted her height in a pair of killer black stiletto heels that complemented her ensemble as she posed while leaning against a wall.

She added a glittering touch to the look by wearing a gold chain ankle bracelet and a number of matching necklaces.

The singer swept her blonde locks back into a messy bun, and accentuated her pretty features by wearing a slick of red lipstick and winged eyeliner.

In her caption, Rita shared an inspirational quote from the late fashion mogul Karl Lagerfeld: ‘One is never over dressed, or under dressed with a little black dress.’ 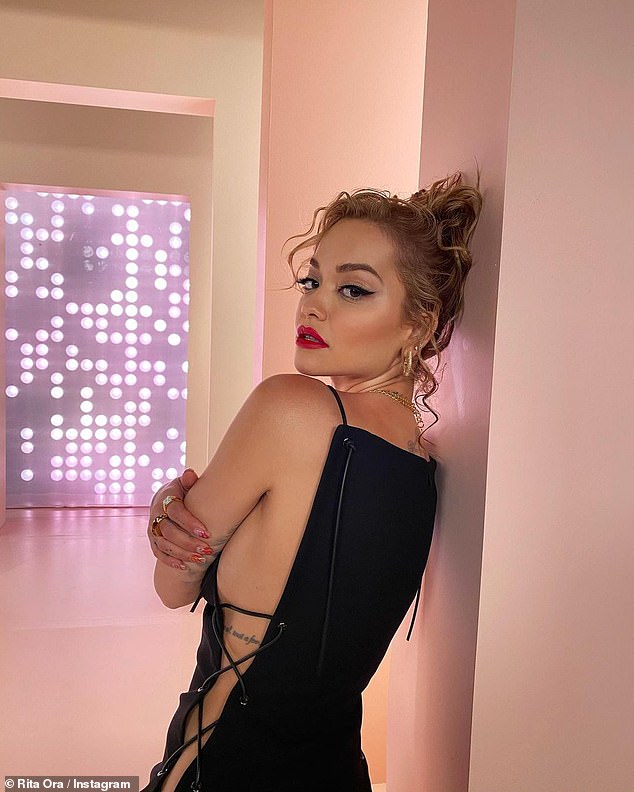 Stunning: The singer swept her blonde locks back into a messy bun, and accentuated her pretty features by wearing a slick of red lipstick and winged eyeliner 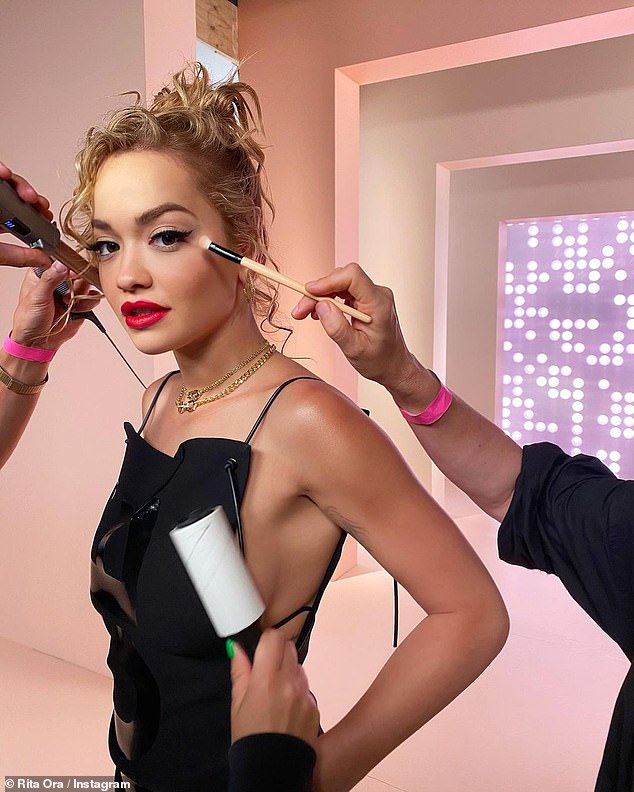 Stylish: Rita added a glittering touch to the look by wearing a gold chain necklaces and a matching ankle bracelet

It was recently reported Rita pulled a last-minute no-show on an episode of  RuPaul’s Drag Race UK that aired earlier this month – forcing producers to ‘replace her with a mannequin’.

The singer is said to have been booked to appear as a guest judge on the show, but reportedly failed to turn up after an alleged disagreement about her entourage.

And with COVID restrictions limiting alternative options, The Sun reports that producers replaced her with mannequin Mickey – based on EastEnders’ Danny Dyer. 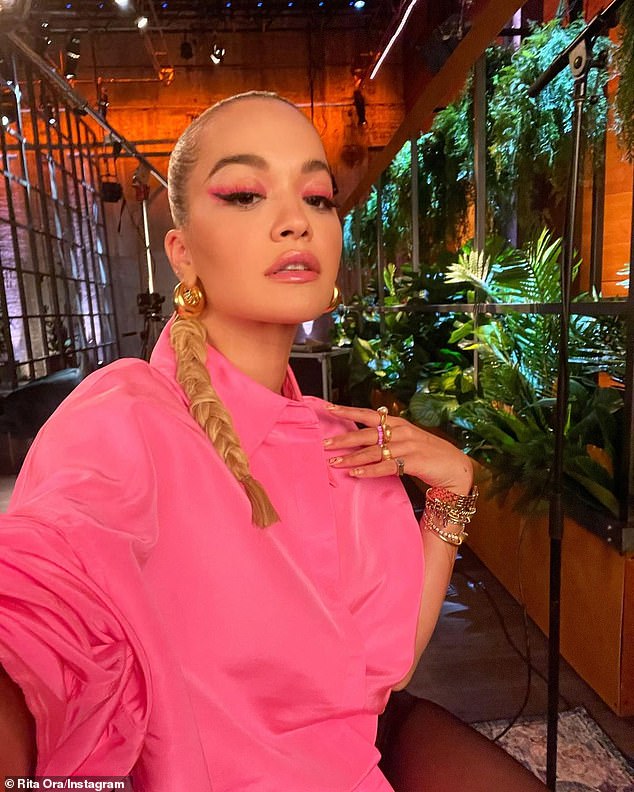 TV show: It was recently reported that Rita pulled a last-minute no-show on an episode of RuPaul’s Drag Race UK – forcing producers to ‘replace her with a mannequin’

A source said: ‘Everyone on set was anticipating Rita’s arrival but, when she didn’t show up, producers had to use their heads and came up with the idea of decorating a mannequin. Surprisingly, it worked out OK and became a running joke.’

During the episode, which was filmed in November, the mannequin sat alongside the likes of RuPaul, Michelle Visage, and Graham Norton as he dished out assessments.

The mannequin was seen ‘flirting’ with Bimini Bon Boulash after her turn as Skat Slater, and even got a tad frisky with ‘Thot Bottom’ – the sketch’s answer to Dot Cotton – in the middle of the Kween Dic. 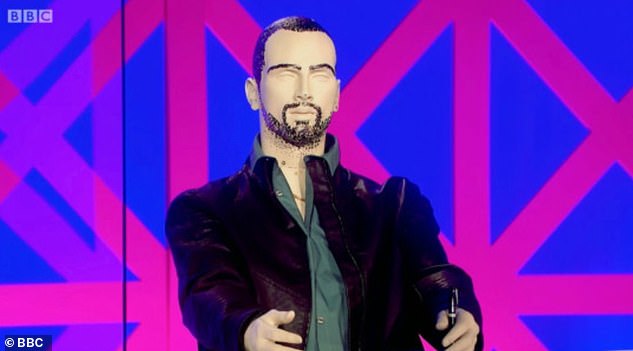 Replacement: With COVID restrictions limiting alternative options, it was claimed producers replaced her with a mannequin called Mickey, based on EastEnders’ Danny Dyer

Rita has proved to be a popular addition to the show, having appeared as a guest judge on RuPaul’s Drag Race All Stars in the US back in 2018.

MailOnline has contacted a representative for Rita Ora for comment.

The star is currently working on the latest series of The Voice in Sydney, after travelling to Australia with her sister Elena, who serves acts as her manager.

During her time off, the blonde beauty has been pictured enjoying the sizzling temperatures in her bikini on Sydney Harbour. 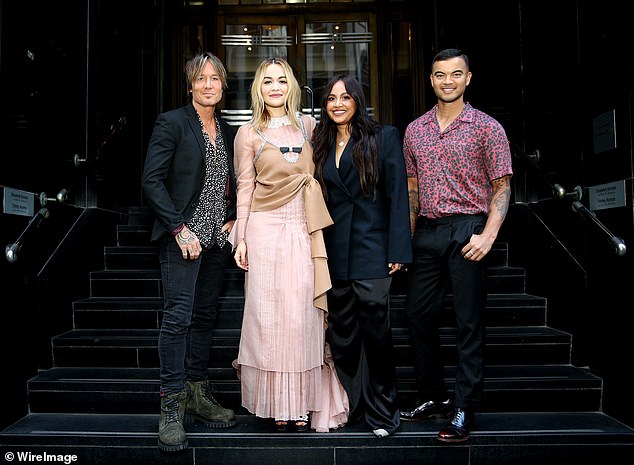 New stint: The songwriter is currently spending time Down Under as she kicks off her role as a judge on The Voice (pictured last month with Keith Urban, Jessica Mauboy and Guy Sebastian)

Rita is making her debut as coach on for the latest series of the singing competition, joining country superstar Keith Urban on the show.

The For You hitmaker has previously been a coach on the UK version of The Voice in 2015, while also taking on judging roles on The X Factor and The Masked Singer.

Oti Mabuse will now be sitting on the panel for the UK season of The Masked Dancer, which will air in place of Britain’s Got Talent this year. 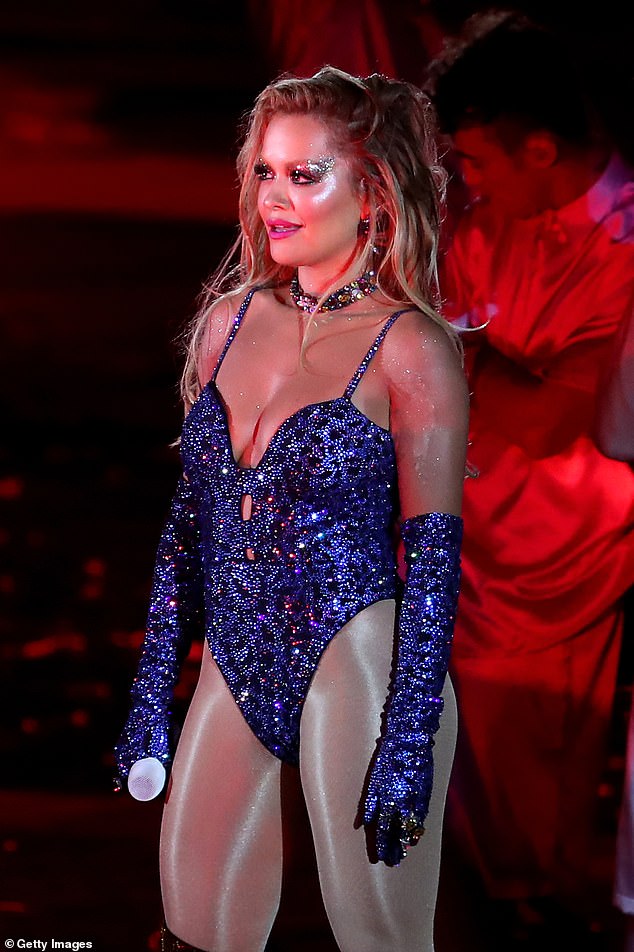 Working hard: The musician has been keeping herself busy in recent weeks (pictured at Sydney’s Mardi Gras celebrations earlier this month)