Robbie Williams’s rollercoaster life in No. 1 hits: As former Take That star equals Elvis Presley’s record with his 13th album to top the charts, we take a look at the highs and lows of his remarkable career

THE SALES: First of his 13 No 1 albums (two of which were greatest hits compilations), this went platinum eight times in Britain; sales of more than two million.

THE SONGS: Old Before I Die, Let Me Entertain You and Angels.

THE BACK STORY: Two years after leaving Take That, Robbie was mired in drink and drugs when he recorded this — initially as a bid to impress Oasis, whose Noel Gallagher called him ‘that fat dancer from Take That’.

After finishing the album, he checked in to Clouds clinic in Wiltshire.

Angels is about his mum.

The title track is about his tragic socialite friend, Tara Palmer-Tomkinson. 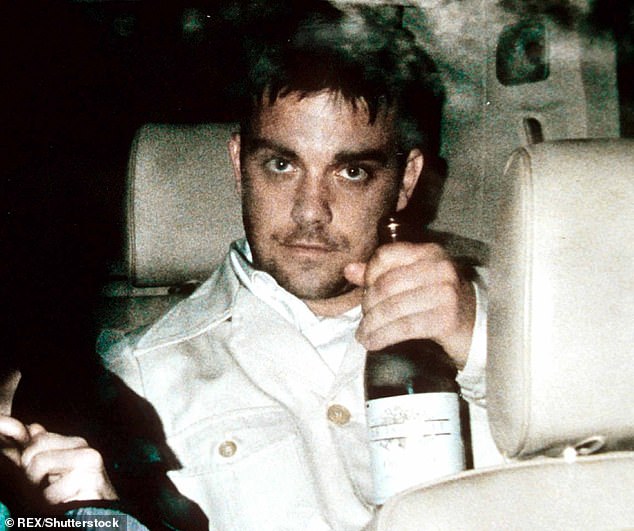 Robbie’s lifestyle worried pals. Pictured: The pop star in London in 1997 holding a bottle of champagne 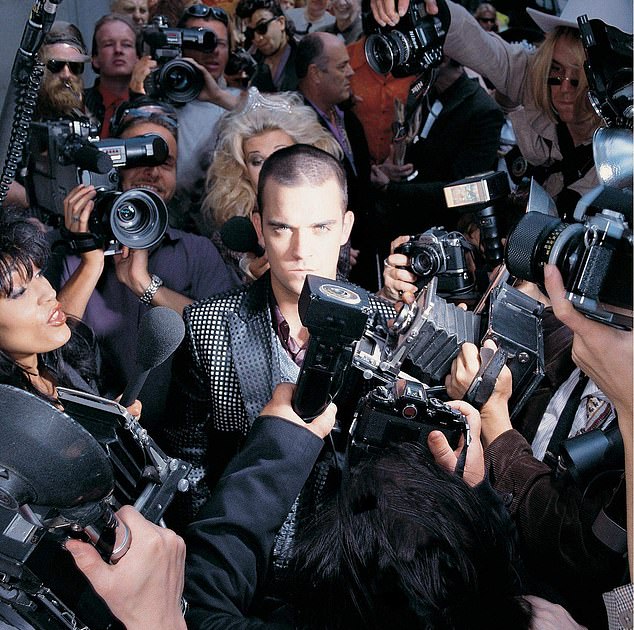 IN A ROMANTIC WHIRL

THE SALES: Ten times platinum in Britain; sales of 2.6 million.

THE SONGS: Two No 1 singles: She’s The One and Millennium.

THE BACK STORY: Out of rehab but still miserable due to his tormented relationship with All Saints singer Nicole Appleton.

She aborted their baby in 1998 and later said her management did not want her to have the child.

He then dated model Tania Strecker, the stepdaughter of his manager, David Enthoven. 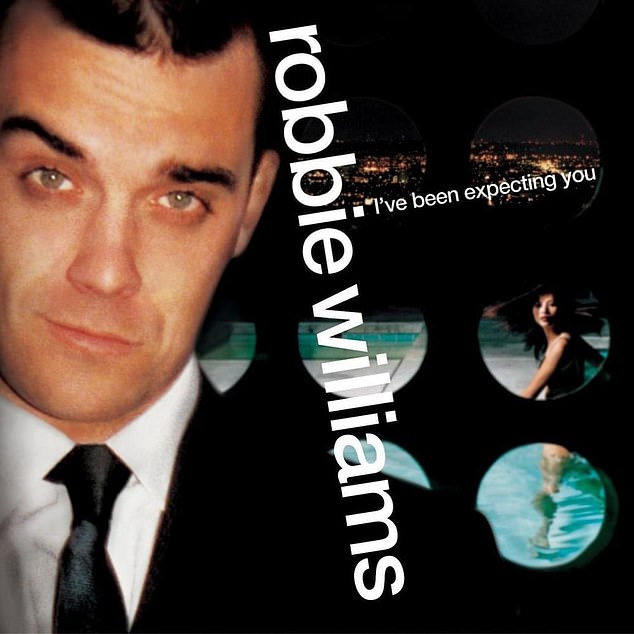 DRUG ADDICTIONS AND A CRUSH ON KYLIE

THE SONGS: Rock DJ and Kids (a duet with Kylie Minogue).

THE BACK STORY: Struggling with depression, Robbie admitted taking morphine, speed, cocaine, magic mushrooms and Vicodin during the 1990s and early 2000s.

A crush on Kylie Minogue ended in rejection after he laughed when she stripped down to a G-string while filming the video for Kids.

Next came a high-profile friendship with Geri Halliwell, who later said: ‘Robbie knew about my bulimia… he told me to go to rehab and that possibly saved my life.

‘I will always be grateful to him, always. I felt he was the only person on the planet who could understand me.’

Ungallantly, he claimed her intensity had ended their friendship.

He said: ‘She turned into a demonic little girl playing with dolls and a tea set.’ 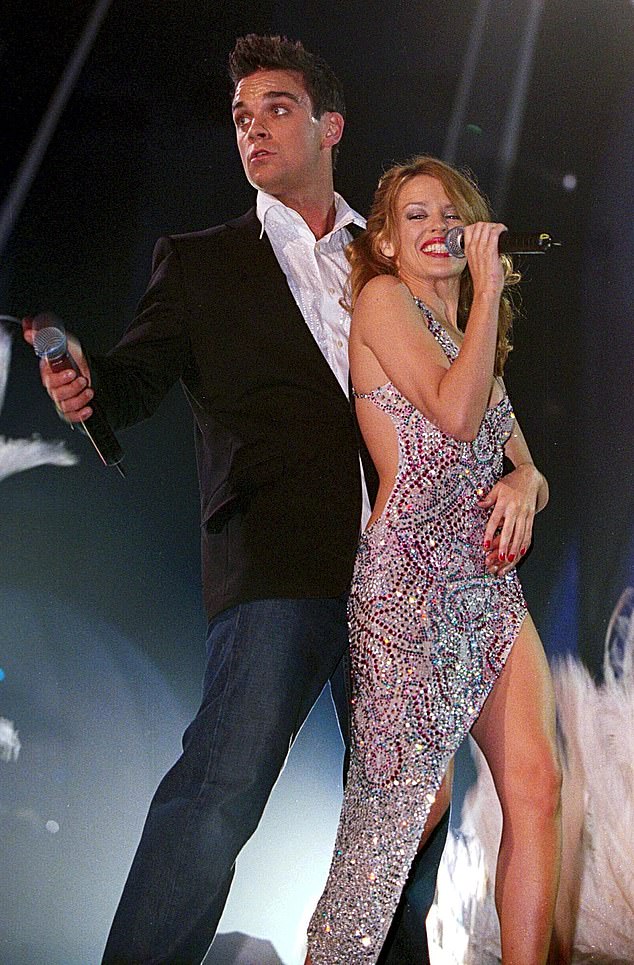 Just good friends: Onstage with Kylie Minogue at the MTV Awards in Stockholm 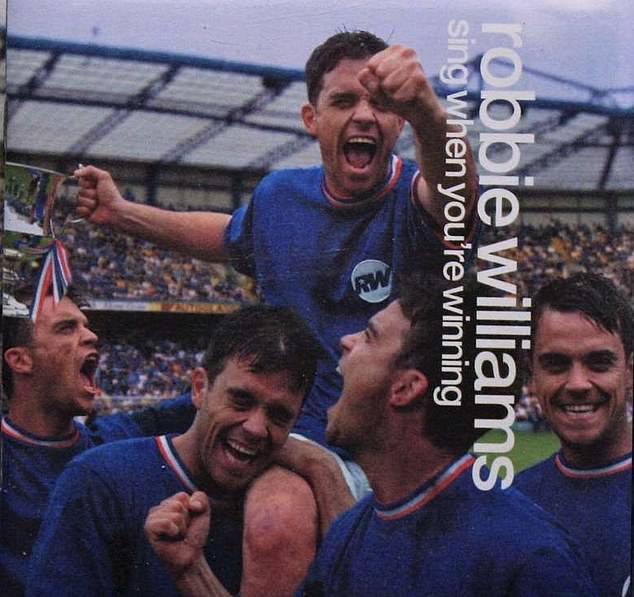 THE SALES: Eight times platinum in Britain; sales of 2.3 million.

THE BACK STORY: The album consisted mostly of cover versions inspired by his love of Frank Sinatra and Dean Martin, and was recorded in two weeks in Los Angeles.

His publicists were happy for rumours of a romance between Robbie and Kidman to circulate, but it seems there was no affair.

Kidman said: ‘He just asked me to do it and I was in between movies and I was like: ‘OK, I’ll give it a go.”

Robbie was now spending every  winter in Los Angeles. 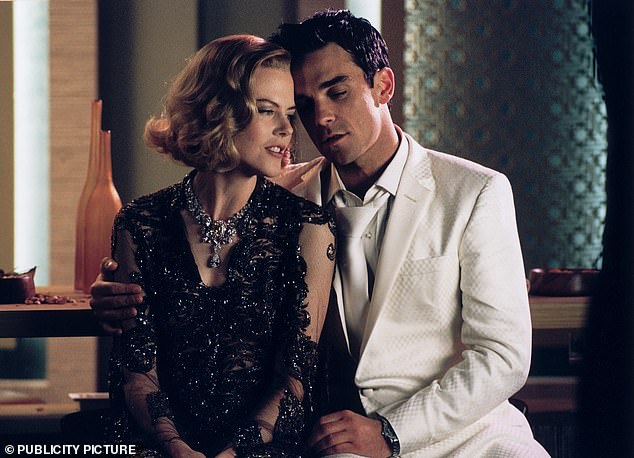 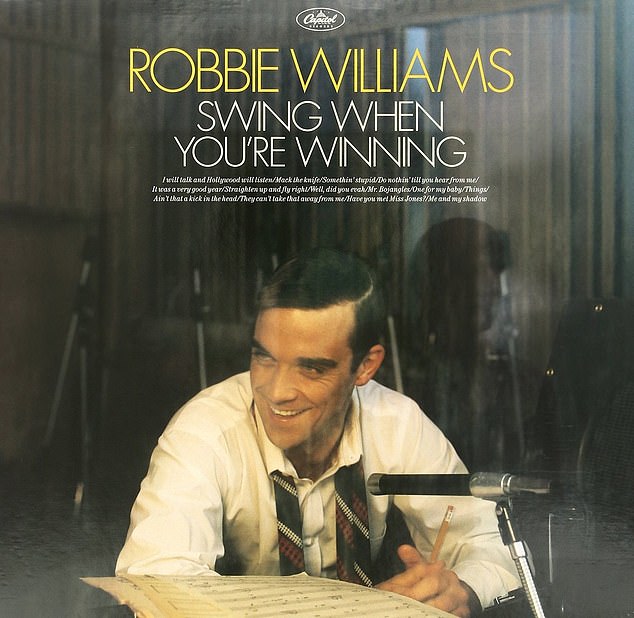 THE SONGS: Feel was the biggest song, followed by Come Undone.

THE BACK STORY: Still lonely — he had flings with models Rachel Hunter (Rod Stewart’s ex-wife) and New Zealander Kylie Bax — depressed and agoraphobic, Robbie’s hopes that Escapology would provide his big U.S. breakthrough came to nothing and the next album wasn’t even released in America.

Realising, however, that he could have a lower-key profile in the U.S., he moved there full-time in 2003. 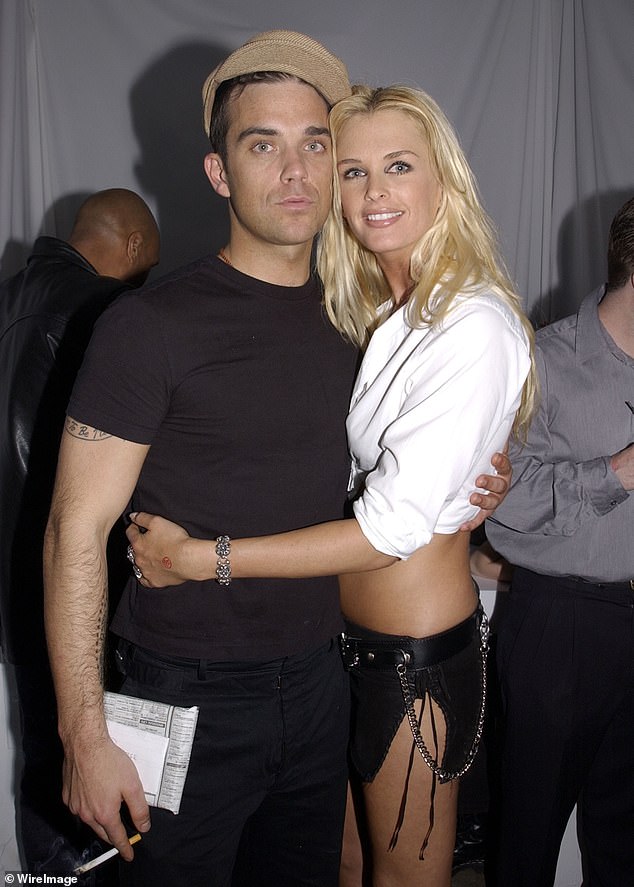 Footloose but unfulfilled: With model Kylie Bax in 2001 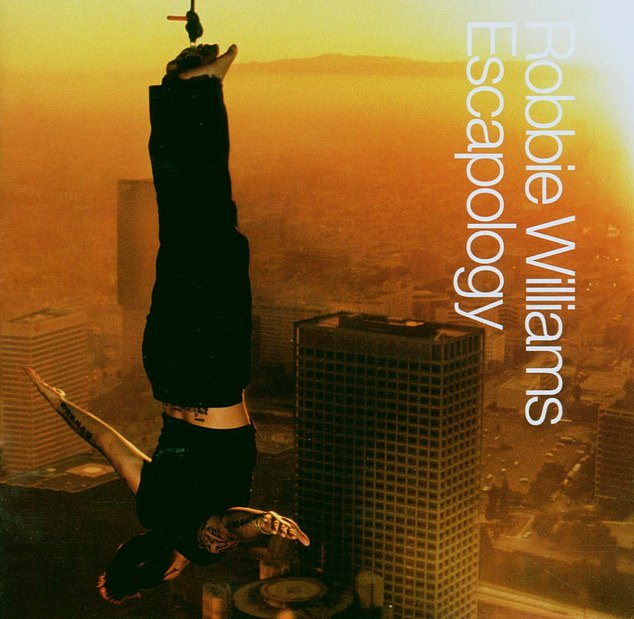 DEPRESSION, ALIENS AND A FAT-MELTING CORSET

THE BACK STORY: The first album made as part of his £80 million deal with EMI, it was the 2005 bestseller in Europe.

Now heavily into Egyptology, UFOs and the paranormal, Robbie had moved to a house in LA with a recording studio.

Co-writer Stephen Duffy said: ‘We were on the same medication and both incredibly depressed.

‘He was listening to a lot of the Smiths — he was a massive Morrissey fan.’

Obsessed as ever with his weight, he bought a ‘fat-melting corset’ called a Vacunaut. 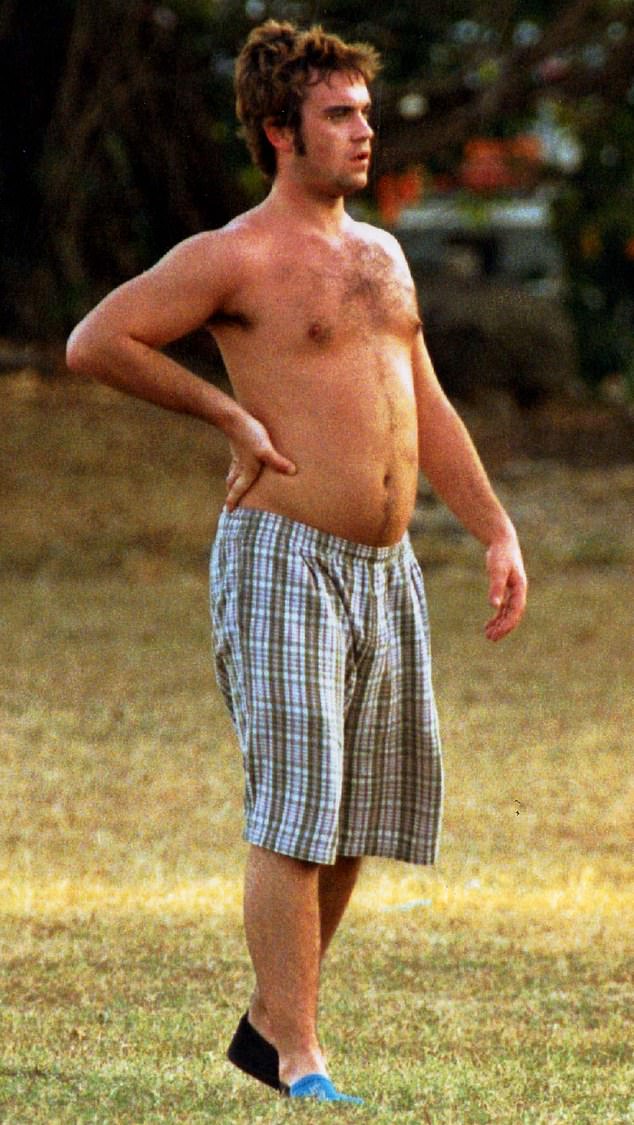 Now heavily into Egyptology, UFOs and the paranormal, Robbie had moved to a house in LA with a recording studio 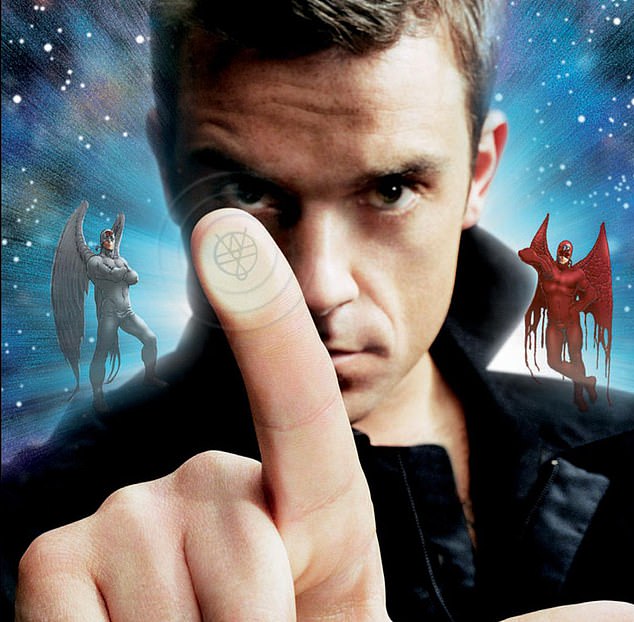 THE BACK STORY: Despite help from the Pet Shop Boys and DJ Mark Ronson, his least successful album. Robbie was devastated and fell back into a drug-taking lifestyle.

He met actress Ayda Field at an LA party but soon dumped her. She said: ‘I was devastated. But I understood because I could see he needed help.’

Later, he told actress Cameron Diaz about his doomed romance and she said: ‘It doesn’t sound like it’s over.’

He later remarked: ‘In that instant, something clicked. So I went to Ayda’s door and that’s the moment I committed to her.’ 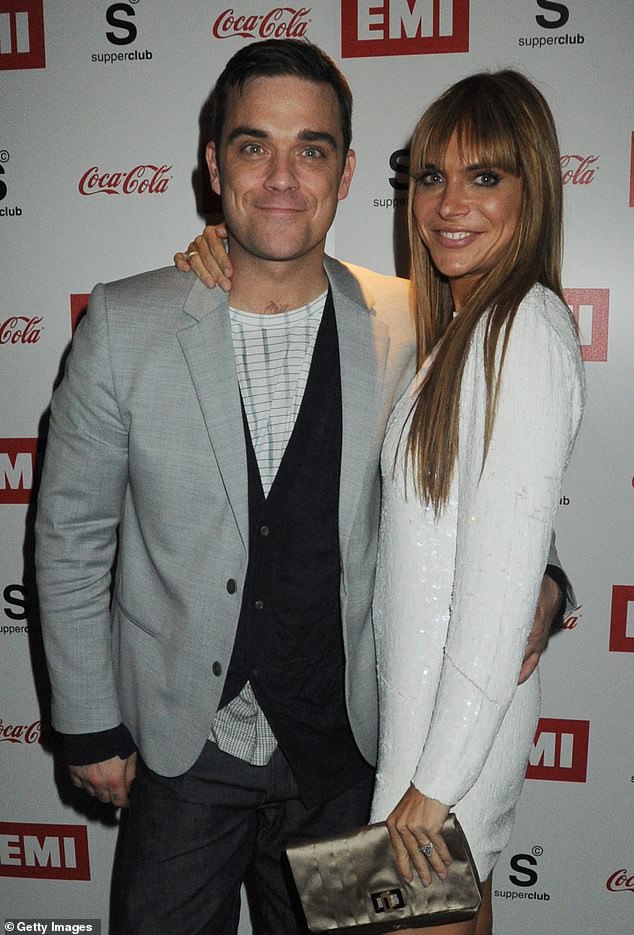 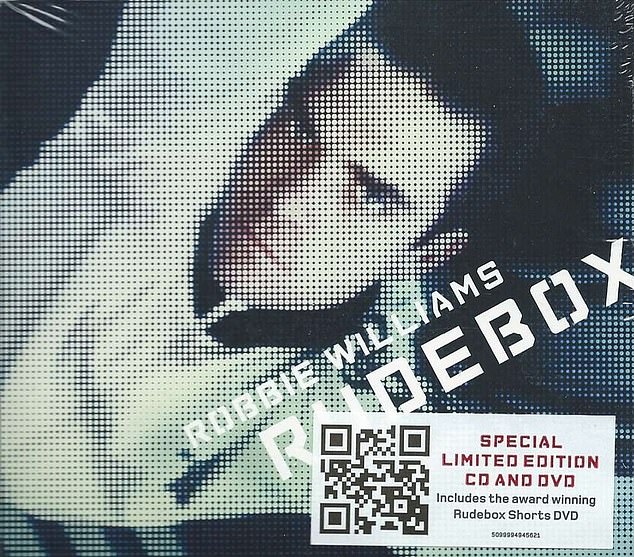 THE SONGS: Candy (co-written with ex-Take That bandmate Gary Barlow) was the only hit.

Having married Ayda — with their eight dogs as bridesmaids — in 2010, he was more contented.

Ayda spoke of his ‘self-loathing’, and the hours of therapy that both of them have undertaken.

FATHERHOOD AND A RETURN TO LONDON

THE SONGS: Go Gentle, covers included Minnie The Moocher and If I Only Had A Brain.

THE BACK STORY: He bought a Holland Park mansion next to Led Zeppelin’s Jimmy Page.

Daughter Teddy was born in 2012, son Charlton in 2014, and daughter Coco via surrogate last year. 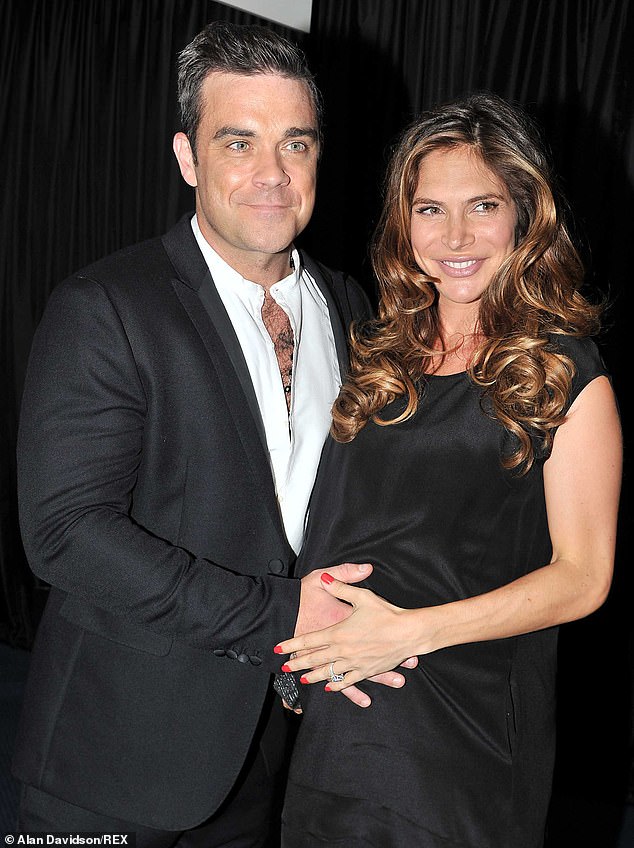 A BREAKDOWN AND THE X FACTOR

THE SONGS: Party Like A Russian and Love My Life.

THE BACK STORY: Ayda nursed him back to health after he quit a tour suffering a breakdown.

Accepted £10 million to judge ITV’s The X Factor — and insisted Ayda was also on the panel. They quit after a just one series.

THE SONGS: Covers including Santa Baby and Winter Wonderland.

THE BACK STORY: Recorded before the final leg of a Las Vegas residency.

Joked he would call the album Achtung Buble in a reference to U2’S album Achtung Baby and to crooner Michael Buble, whose albums always sell well at Christmas. 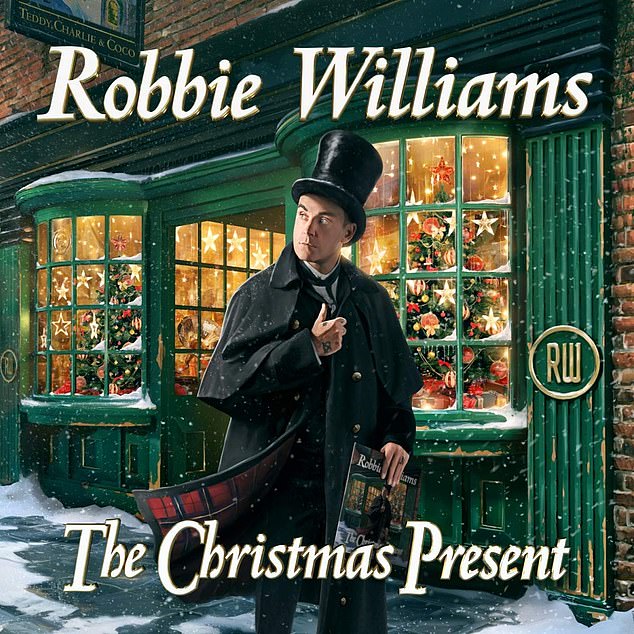