They celebrated 13 years of marriage in June and are currently enjoying a sunshine yacht break.

And Rod Stewart and Penny Lancaster looked smitten as they stepped out for a family dinner in Hvar, Croatia recently.

The music icon, 75, and his model wife, 49, sweetly held hands as they strolled down the picturesque cobbled streets while chatting. 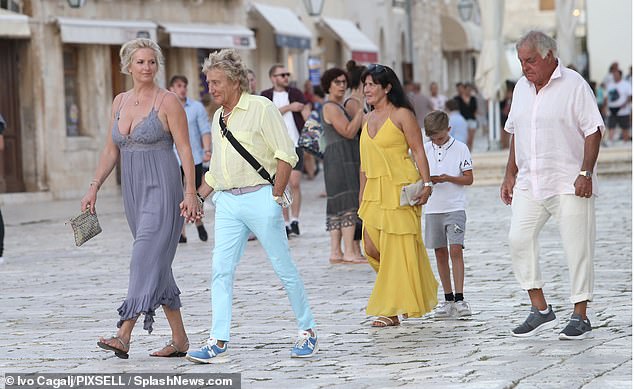 Smitten: Rod Stewart and Penny Lancaster looked smitten as they stepped out for a family dinner in Hvar, Croatia recently

The rocker showcased his signature style in an attention-grabbing pastel yellow shirt, teamed with azure skinny jeans and trainers as he strolled.

Rod accessorised with a satchel and beaded necklaces, with his locks worn in his trademark spiky style.

Penny put on a busty display in a plunging lavender maxi dress, paired with bejewelled sandals as she held Rod’s hand.

Her blonde locks were pulled into a stylish updo with wavy strands framing her face, while her pretty features were enhanced with a radiant palette of make-up. 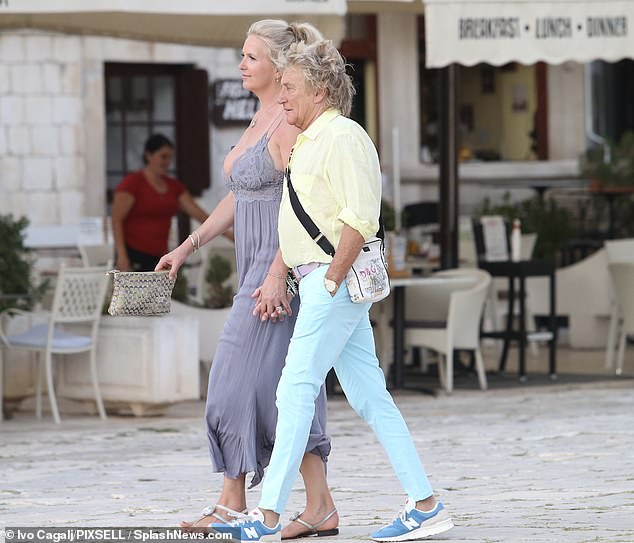 PDA: The music icon, 75, and his model wife, 49, sweetly held hands as they strolled down the picturesque cobbled streets while chatting

Rod and Penny’s yacht break may be a delayed anniversary trip for the loved-up couple, who celebrated 13 years married last month.

They celebrated their wedding anniversary and marked the occasion with a takeaway meal and a glass of wine in the back of their car.

Earlier this year, Rod gushed that his wife Penny is ‘everything’ to him, as he reflected on their relationship. 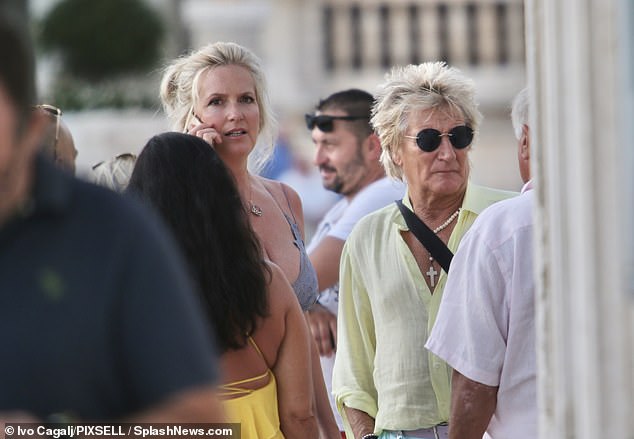 Radiant: The couple looked sunkissed and happy as they enjoyed an evening of leisure

The singer looked back on their marriage in a candid interview with The Mirror, and admitted she helped him become a better person.

Of their two decades of marital bliss, he said: ‘I’m stunned that Penny has kept me around for 20 years.

‘They have not invented the words for how I feel about her. She is everything.’

He went on to say that she helped him understand the importance of a long and happy marriage, as he admitted: ‘It took me a while to learn, because I have been a scallywag in the past.’

Rod explained that being with Penny made him learn ‘good manners’ which he also tries to instil on his children, while he feels he helped her gain ‘a lot of confidence’ during the course of their relationship.

Penny and Rod began dating in 1999 before marrying eight years later in the medieval monastery La Cervara in Portofino.

After their wedding on 16 June 2007, the couple enjoyed their honeymoon on the Lady Ann Magee yacht, which was moored in Portofino, and they share sons Alastair, 14, and Aiden, nine, together. 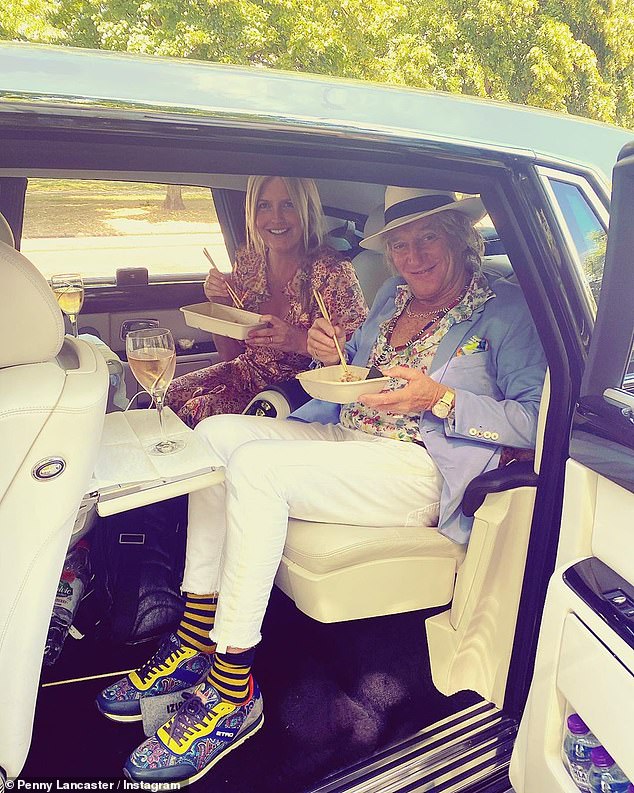 Cheers: The holiday may be a delayed anniversary trip for Rod and wife Penny Lancaster, 49, who celebrated 13 years married last month