Rod Stewart, 75, proudly flaunts his protective leather gloves as he fuels up on coffee amid the coronavirus pandemic

Rod Stewart was taking no chances with the coronavirus as he donned a pair of cream leather gloves while out buying coffee in Bel Air, California, on Friday.

The singer, 75, cheekily flashed his protective accessories toward the camera as he left Starbucks with a hot drink in hand.

On Friday the L.A. County Public Health Department officials confirmed eight new cases of the coronavirus, bringing the total to 40. 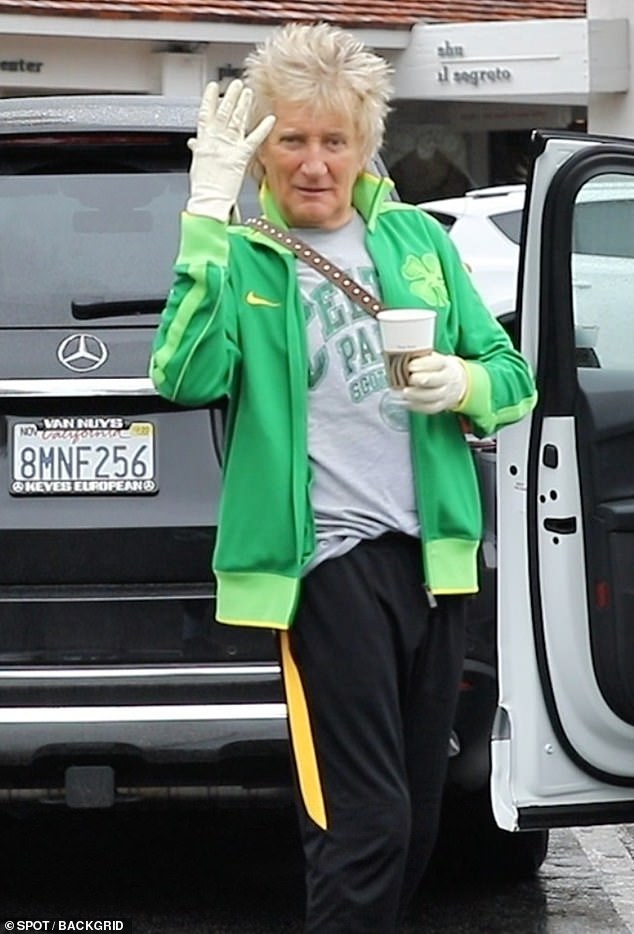 Safety first: Rod Stewart, 75, was taking no chances with the coronavirus as he donned a pair of cream leather gloves while out buying coffee in Bel Air, California, on Friday

But Rod kept the rest of his outfit casual as he opted for black tracksuit bottoms and a grey T-shirt which he complemented with a Celtic FC tracksuit top.

He finished the look with a pair of green New Balance trainers and a studded over-the-shoulder bag.

The singer strutted across the car park before clambering back into his SUV with his wife Penny Lancaster and pals. 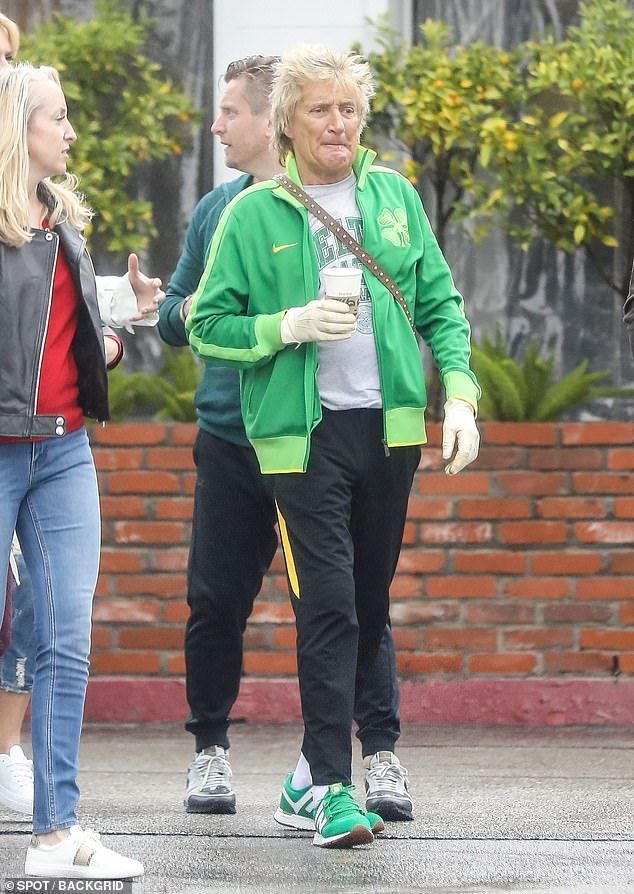 Coffee stop: The singer kept the rest of his outfit casual as he opted for black tracksuit bottoms and a grey T-shirt which he complemented with a Celtic FC tracksuit top

The outing comes after Rod underwent an operation at the beginning of the year when his knee ‘packed up’.

Penny has since revealed that the surgery had been a success and claimed that her husband’s knee was now ‘better than ever’.

Speaking to The Mirror, Penny shared an updated on Rod’s recovery and said: ‘[Rod has] just done two private shows in Florida and he said, “My knee is better now than it has ever been.”

‘He said he was running sideways and it has all been sorted. He is like a masterclass of knee replacement and there is no stopping him.’

Penny revealed that Rod is gearing up for a three-week run in Vegas before heading on tour across North America for two months. 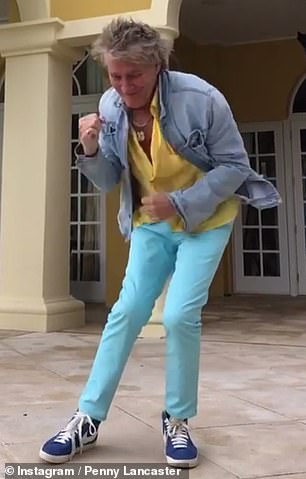 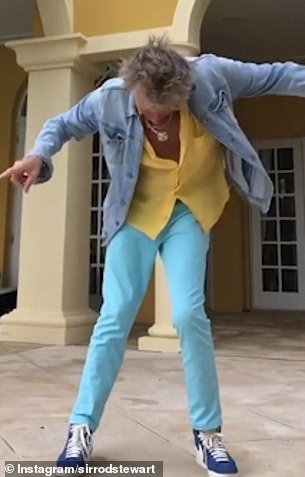 Forever a showman: Rod shared a video of him cracking some dance moves while promoting his North America tour just shortly after his operation 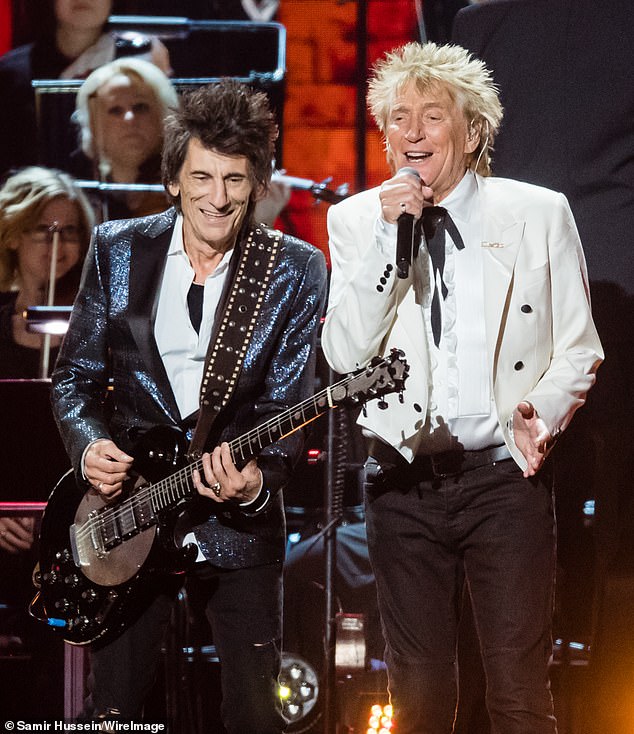 Back in January, Penny had kept fans updated with Rod’s progress and shared a snap of the Maggie May hit-maker dressed in a robe, while celebrating his 75th birthday.

‘Roddy is doing remarkably well after his knee replacement surgery on Tuesday (so well that the naughty boy keeps trying to walk with out his crutches).

‘Luckily he is being discharged today to celebrate his 75th tonight and home this weekend to see the boys play football,’ she wrote.

Meanwhile, Rod shared a video of himself defying his age as he danced around while throwing his knees into the air. He teased: ‘Practicing moves for my North American tour!’

Everything you need to know about coronavirus

By Natalie Rahhal, Acting US Health Editor for DailyMail.com

HOW DANGEROUS IS CORONAVIRUS?

About 14 percent of people who contract the Covid-19 coronavirus are taken to hospital – with severe symptoms including breathing problems and pneumonia. About 5 per cent need intensive care.

But the majority who get the virus suffer nothing more than a cough and may never know they are infected.

So far, some 51,000 people around the world have already recovered from coronavirus – and that just includes the numbers who received a diagnosis.

HOW MANY PEOPLE DIE?

Officially, the death rate so far has been just over three percent. But experts believe the true mortality rate is probably between one and two percent. This is because most mild cases have not been picked up by doctors or reflected in the official numbers – so the death rate is inflated.

HOW DOES THIS COMPARE WITH OTHER DISEASES?

Seasonal flu kills roughly 0.1 percent of people. So Covid-19 is between 10 and 20 times more fatal.

But it is far less dangerous than SARS – the virus that ripped across China in 2003 – which killed 10 percent of patients.

Yes, but not dramatically. The best estimates suggest every person with Covid-19 passes it on to 2.6 people, on average. For flu that number is 1.5.

CAN IT BE SPREAD WITHOUT SYMPTOMS?

Initially scientists feared carriers who had no symptoms could pass it on. That is now in doubt.

What is likely, however, is those who have mild symptoms are putting it down to a cold and going about their normal lives – which puts others at risk.

HOW LONG IS IT BEFORE SYMPTOMS APPEAR?

Again, unclear. Initially scientists said this could take up to two weeks.

But recent evidence suggests the incubation period could be as long as a month – particularly among children.

The average, however, is much shorter. A Chinese study said the average period of symptom onset was 5.4 days for adults and 6.5 for children.

WHO IS AT RISK?

The virus can affect anyone – with a study of the first 41 infected people revealing two thirds did not suffer from any pre-existing condition. But the middle-aged are most likely to get it – 78 percent of those infected in China have been aged 30 to 69.

WHAT ABOUT THE OLD?

WHO ELSE IS VULNERABLE?

Those with other conditions – such as diabetes, heart disease, high blood pressure and kidney problems – are likely to suffer severe complications if they become infected.

Children seem to be low-risk. Less than 1 percent of the Chinese cases have been under the age of ten – and if children do get the virus it’s often a mild form.

They do, however, retain the virus for longer than adults.

A study last week found the virus was still present in the stools of some children for a month after they contracted it.

Men are marginally more likely to get the virus than women. It is not clear why this is.

HOW DO DOCTORS TEST FOR COVID-19?

Anyone who has symptoms –particularly if they have travelled to an at-risk area – are told to call ahead to their health care provider, local emergency department or clinics.

This way, health care providers can be prepared, wearing masks, gloves and other personal protective equipment when they meet the possible patient and escort them to isolated areas of the facility.

They are tested using a cheek swab which is sent off for analysis at one of 12 Public Health England labs, a process that takes between 24 and 48 hours. Any positive test is double-checked at the main PHE lab in Colindale.

WHAT TREATMENT DO PATIENTS GET?

There is little doctors can do to tackle the virus, but they can treat the symptoms – such as fever and respiratory problems. Antivirals and antibiotics are also used, mainly to keep secondary problems at bay.

In the most serious cases patients are put on life-support equipment.

There are several clinical trials for potential coronavirus treatments ongoing worldwide, including one in Nebraska, where at least 13 patients are in quarantine, including two in biocontainment units.

WHAT ABOUT A VACCINE?

Even though the Wuhan virus appeared only a few weeks ago, 20 teams around the world are already manufacturing vaccines.

Chinese authorities provided the DNA code for the virus early on in the outbreak, enabling scientists to get to work straight away.

At least 30 companies and research institutions in the US are racing to make a vaccine.

Last week, one of these companies, Moderna, shipped its candidate vaccine to the US, signalling the shot was ready to begin clinical trials.

Even so, US health authorities say it will likely be upwards of a year before a vaccine is actually ready.