Sam Frost has deleted her Instagram page after copping backlash for breaking down in a video to her followers where she revealed she has not been vaccinated against Covid-19.

The Home and Away actress, 32, called for ‘less judgement’ towards Australia’s unvaccinated population and admitted her mental health has struggled as a result.

‘I was really hesitant about doing a video or even speaking up about this sort of thing, but I feel like it’s getting to a point now in the world where there’s a lot of segregation,’ she said on Saturday.

‘There’s a lot of harsh judgement and opinions being thrown around a lot and it’s taking its toll on my mental health for sure, and I know people around me are struggling – particularly if they’re on the side of they don’t want to get vaccinated, for whatever reason.’

Frost was roundly condemned for claiming anti-vaxxers were ‘segregated’ in society. 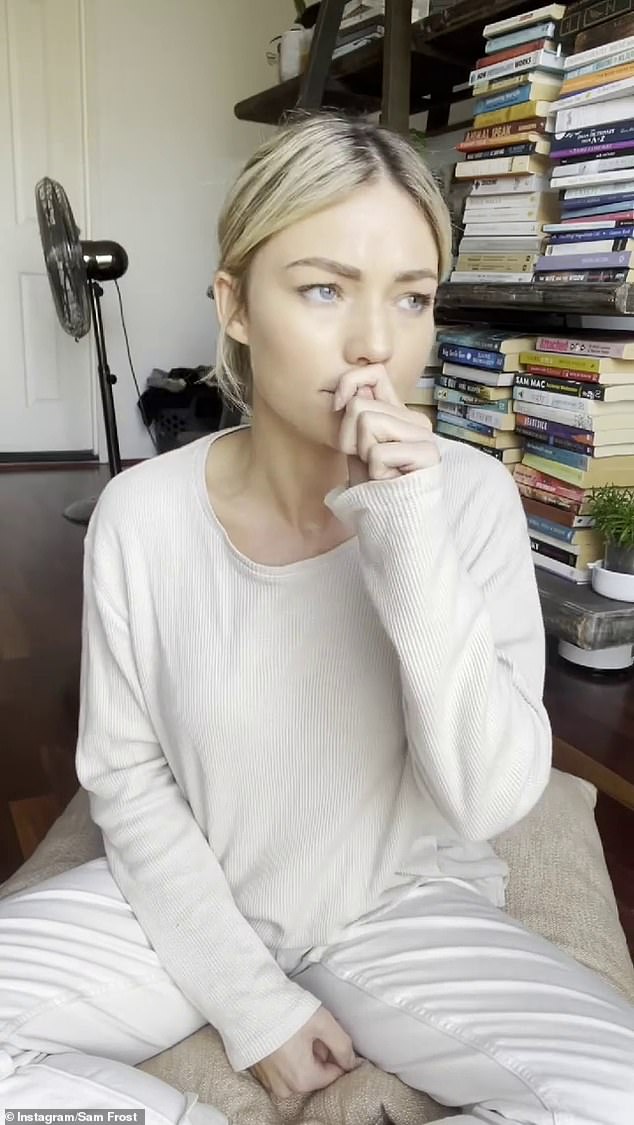 Speaking out: Home and Away star Sam Frost has come out as unvaccinated in an emotional video shared to Instagram on Saturday 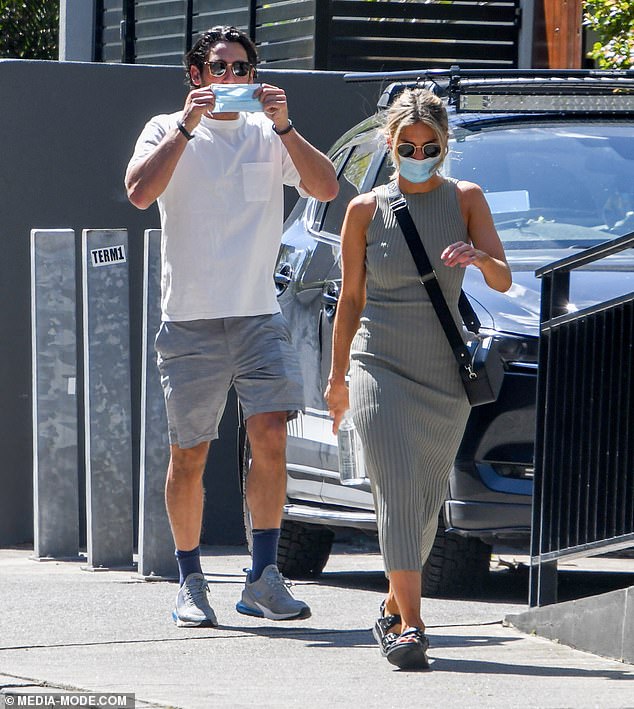 ‘Sam Frost, if you want fewer people to judge you and more people to empathise with you – maybe, just maybe don’t use the word ‘segregation’ 30 seconds into your video. This isn’t 1950s Alabama. You ain’t Rosa Parks,’ wrote journalist Antoinette Lattouf.

‘Watching Sam Frost tearfully speak about ‘segregation’ because she chooses not to get vaccinated and being called ‘brave’ by her followers is taking me to a level of ‘what the f***’ I didn’t know was possible,’ added comedian Em Rusciano.

‘It’s not segregation so I would suggest you change your terminology because that is so disrespectful to people who have been segregated because their race, religion, sexual orientation,’ wrote another person on Twitter.

In earlier post from this week before revealing she wasn’t vaccinated, Frost wrote she was going to sip on a few ‘cocktails with the girls’.

‘I walked three million steps today and feel like my legs are going to fall off. So I’m celebrating by taking my hair out of a gross bun, putting on some makeup, and getting takeaway cocktails with the girls,’ she wrote on Instagram.

In the video that has now been removed along with her Instagram page, the former Bachelorette broke down in tears as she described the judgement given from those who have had the jab.

‘There are lots of different reasons why people are not getting vaccinated and it might be because of their medical history, their concerns, they might have family history, it could be religious reasons.’

In earlier post from this week, Frost wrote she was going to sip on a few ‘cocktails with the girls’. Daily Mail Australia is not suggesting Sam Frost breached any Covid-19 health orders. 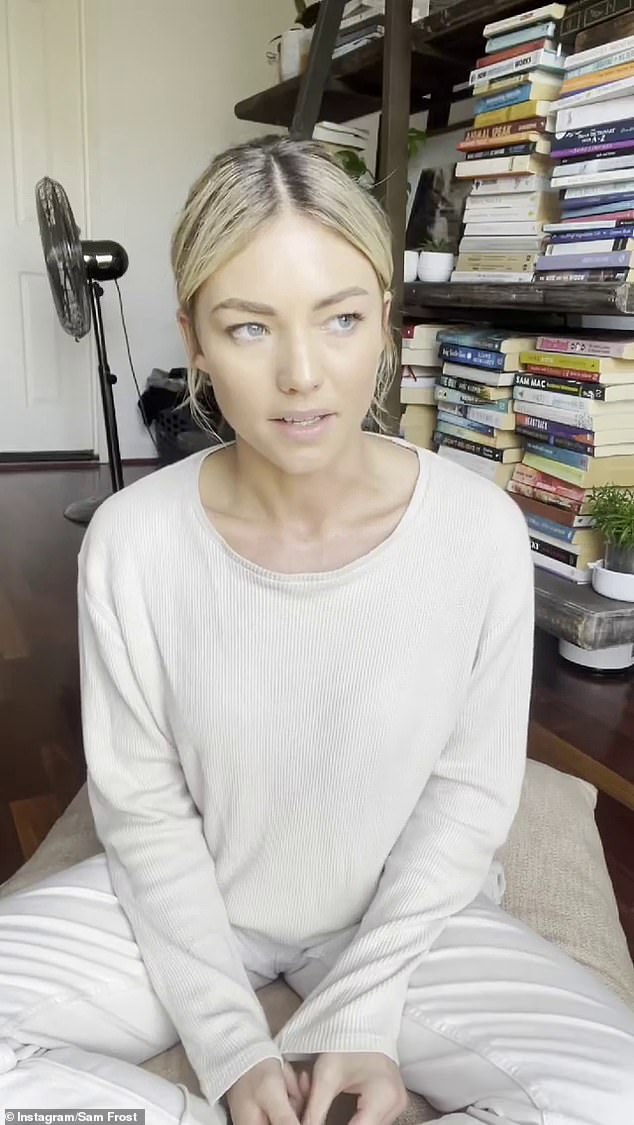 Medical: Sam shared that she herself has not been vaccinated, but clarified that she had spoken to her medical doctor as well as her psychologist about her decision

‘And you’re too scared to talk about your opinion or your feelings and part of you wants to go, ‘Well it’s none of your damn business why I’m not! And there’s good reasons why I’m not and I don’t want you to judge me.”

She explained that it was important for the unvaccinated to look after their mental health, especially as freedoms return for fully vaccinated Australians.

‘I’m struggling a lot with my mental health and I like to think that I’m pretty on to it. I see a psychologist regularly. So I can’t imagine what it’s like for people who don’t have a support network around them,’ she said. 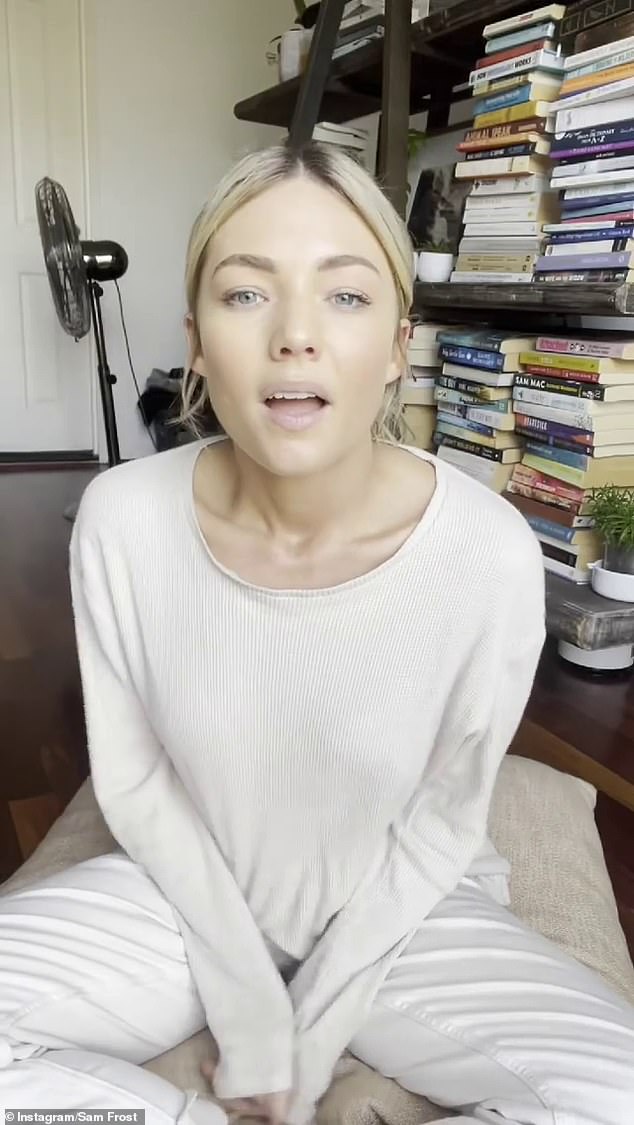 Frost then called out the country’s leadership and made a call for employers to show more support towards their unvaccinated workers.

‘What I wish employers would say to their employees is, ‘You still matter and you are valued and you are not less intelligent or worthy or anything because you’ve made a choice about your body’.

‘I wish there were more people who made us feel like we are less alone.’

She also admitted that she could ‘get in trouble’ for coming out publicly as unvaccinated, before urging people to treat each other with more kindness and compassion.

It’s unclear if Frost’s choice to remain unvaccinated will affect her role on Home and Away. 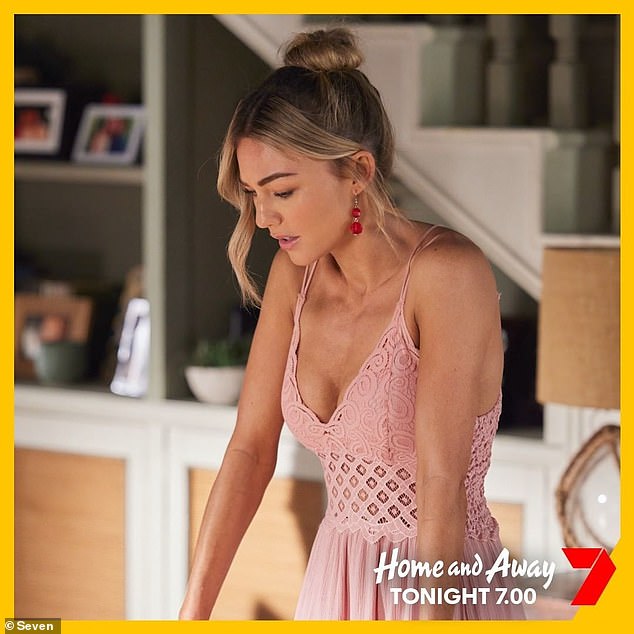 Future: It’s unclear if Sam’s choice to remain unvaccinated will affect her role on Home and Away

Despite not being vaxxed, recent paparazzi photos show Sam with her mask on outdoors, indicating that she’s been following Sydney’s rules and regulations.

She also follows a healthy lifestyle with a good diet and exercise, as evident by her Instagram page.

The former Bachelorette has become a mental health advocate in recent years, and even started her own mental health initiative in 2015 with her sister called Believe by Sam Frost.

The siblings recently put together a series of youth workshops to help young people deal with bullying, anxiety and social media pressures, and are looking at doing similar workshops for adults.

‘I feel like my purpose is the work I’m doing with Believe. I love my job on Home and Away and it gives me this great platform to help get my message out,’ she told the Daily Telegraph.

From Monday, a swathe of restrictions will lift for fully vaccinated people across New South Wales.

According to a revised roadmap to freedom, revealed by Premier Dominic Perrottet after he took over from Gladys Berejiklian, restrictions will ease again for the fully vaccinated when the state hits its 80 per cent jab target on October 25.

The relaxed rules will then also apply to unvaccinated residents on December 1. 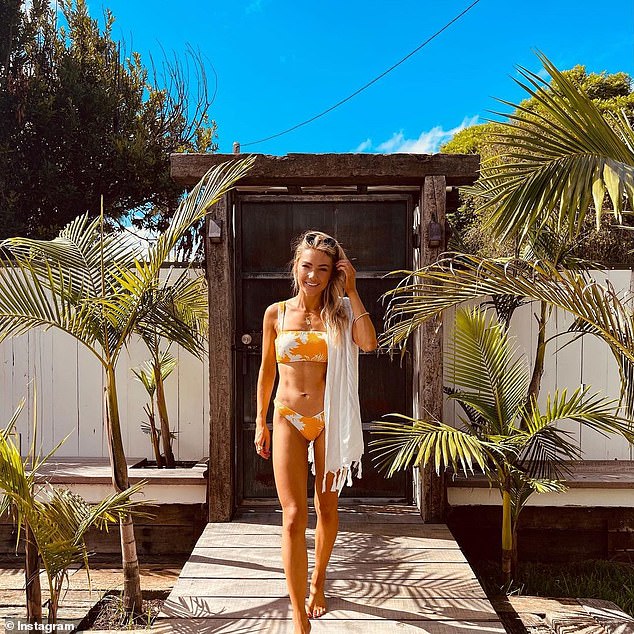 Health: The 32-year-old follows a healthy lifestyle and often shares her workouts on social media