His verse evokes the sweat and suffering of Tommy Atkins — the ordinary soldier who risks his neck in battle only to be consigned to oblivion in peacetime.

But that has not prevented Rudyard Kipling’s celebrated poem Mandalay from being expunged from the BBC’s showpiece commemorating the 75th anniversary of VJ Day — much to the distress of veterans’ organisation the Burma Star Association.

The poem was first set to music in 1907 and was to have been sung for inclusion in the evening segment of VJ Day 75, to be hosted on Saturday night by Joanna Lumley on BBC1.

But that plan, I can disclose, was abandoned after a run-through of readings and songs at the Cenotaph, at which acclaimed bass-baritone Sir Willard White, pictured, was due to have sung Mandalay. 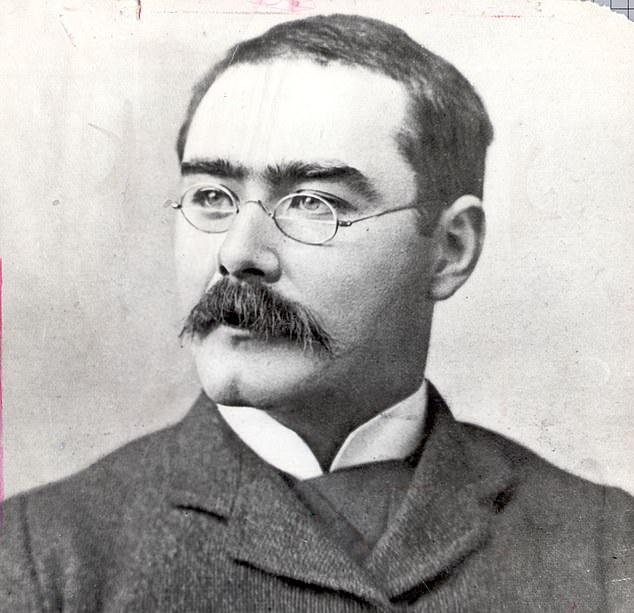 ‘Sir Willard objected to the line “an wastin’ Christian kisses on an ’eathen idol’s foot”,’ I’m told. ‘He felt it derogatory to people of colour.’

Mandalay, in which Kipling imagines a British soldier fondly recalling his days in Burma, has been criticised in the past as a vehicle for colonial thought.

‘Sir Willard was invited by the BBC to sing Mandalay,’ she tells me, though declining to say whether Sir Willard, 73, voiced any objections to the poem or any particular line within it. ‘In the end, another choice of song was made.’ 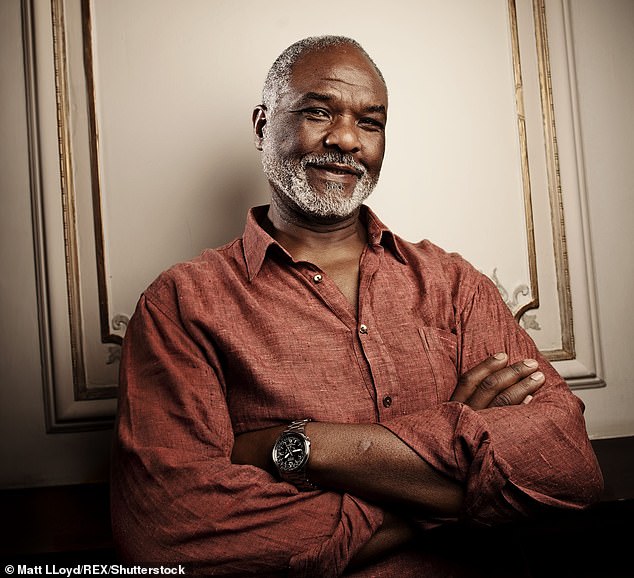 The plan was abandoned after a run-through of readings and songs at the Cenotaph, at which acclaimed bass-baritone Sir Willard White was due to have sung Mandalay

The BBC also declines to explain why the poem was dropped. ‘Many songs and contributions are considered when planning events such as this, with the final running order only being confirmed shortly before recording,’ says a spokesman.

‘We were certainly not consulted,’ Phil Crawley, the Association’s administrator, tells me. He adds that Mandalay — a favourite marching tune for the men of the 14th Army in Burma — has intense emotional significance for them.

‘In 2015, a major part of the Service on Horse Guards Parade was a reading of Mandalay by Charles Dance. Many members have asked for it to be played at their final commitment.’

The story is about an American football coach made the unlikely manager of an English ‘soccer’ team.

West End star Hannah Waddingham, who plays club owner Rebecca, says of Lady Brady: ‘I’ve followed her unswerving power through a man’s world for years, yet she never for a second loses her femininity or chooses to hide it.

‘I think she’s a wonderful role model for young women.’

The Marquess of Bute’s daughter Lady Lola is letting her hair down and kicking her feet up in Ibiza with pop star Rita Ora.

The pair collaborated earlier this year on a book exploring mental health and addiction.

Just two weeks after Lola celebrated one year of sobriety, Rita and her sister Elena, 31, joined Lola and her half-sister, Game Of Thrones actress Jazzy de Lisser, 29, to enjoy a girls’ night on the island.

With interlocking arms, they posed for a picture in which they show off their tans.

‘I feel so grateful and lucky to have had a second chance,’ Lola says of her teetotal life. 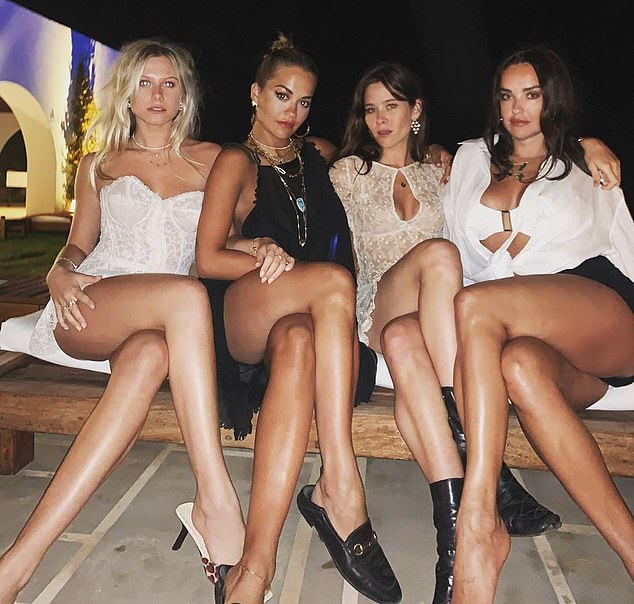 TV presenter Julia Bradbury, 50, thinks her Greek family heritage is her key to staying and looking young and active.

‘They eat a very healthy diet. I go to Greece every year if I can and you see these old grandmothers bobbing around in the sea. They’re active and I think that’s the key to staying young mentally and physically.’

The mother of three moved to California two years ago when her husband became Facebook’s vice-president and this week is enjoying a staycation up north in Alaska, where she has been honing her fishing skills.

Sharing a picture online, she beams while holding a large salmon which she says took hours to reel in. ‘Patience is not really my forte,’ she admits. ‘But look what I caught!’ 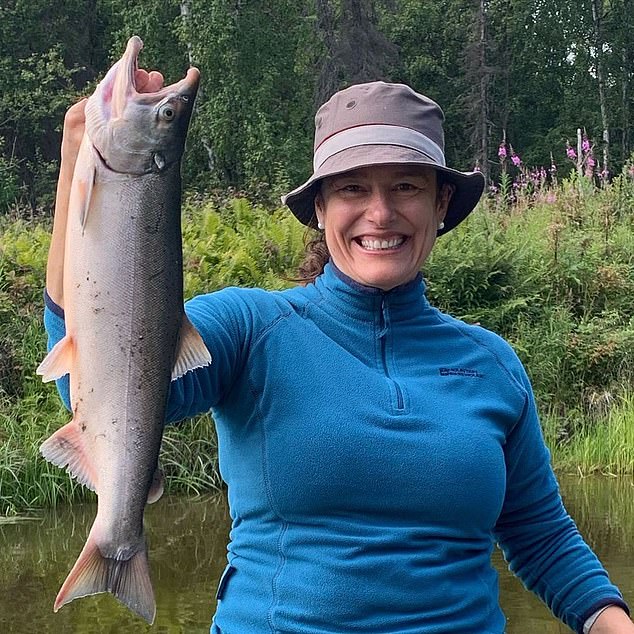 In the heatwave, you might think no one would begrudge their neighbours the chance to cool off.

However, The Split star Stephen Mangan is protesting against plans to install air-conditioning units in swanky Primrose Hill.

Mangan moans he ‘can’t stress too strongly’ how unhappy he is about the proposal, adding: ‘The visual impact will be huge — 11m x 3.5m. It’s simply not reasonable, fair or right.’

A spokesman for Utopia Village says: ‘The proposed location is both inconspicuous and positioned to be located at the farthest possible distance from neighbours.’

The Duchess of Sussex’s biographer and cheerleader Omid Scobie insists everything in his hagiography, Finding Freedom, was double-sourced. But what about the details of his own life?

Speaking this week, the former gossip writer trilled: ‘Some websites say I’m 33. My age has been placed anywhere between 30 and 40 in the past two weeks. I’m actually 38. I can’t control what websites write.’

Official records at Companies House state that Scobie was born in July 1981, making him 39.

Sir Mick Jagger’s model daughter, Georgia May Jagger, once complained that the problem with having famous friends is that she sees them ‘less and less’ as their success grows.

Happily, at least one such bond endures.

Childhood pal Cara Delevingne celebrated her 28th birthday yesterday and Georgia marked it by sharing online a throwback Polaroid of them in party dresses.

‘I love you so much,’ wrote Georgia, 28. ‘I can’t wait to be old dog-obsessed ladies sitting on the porch with towels on our heads chatting away.’ 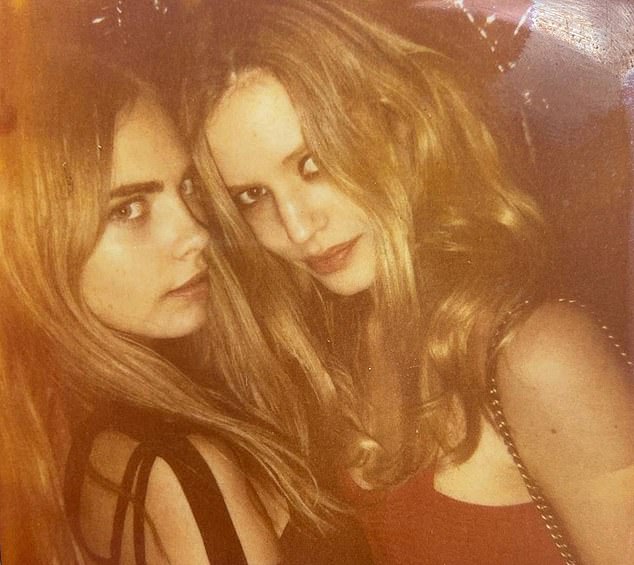 Prince Charles is mourning one of his oldest polo-playing team-mates. New Zealand-born Tim Keyte, who was manager of Cirencester Polo Club after a career as a professional player, died on Tuesday aged 67.

Speaking about his time with the royals, Keyte said: ‘Prince William is so much like his father in the way he plays. I played with his father quite a bit in the early days. Harry has got his own style. He’s more of a fighter, someone who gets in there and gets his hands dirty.’