Sharon Stone, 62, shares an astonishingly wrinkle-free selfie where she does not look much older than she did when she was a model at age 19

On Wednesday the 62-year-old Basic Instinct star shared a selfie for her 2.1M Instagram followers where she looked wrinkle free as she showed off a new sassy haircut by stylist Adir.

This comes just after the mother-of-three posted a throwback photo from when she was 19-years-old and just starting out in modeling, proving that she has always been a natural beauty.

Youthful lady: Model turned Hollywood icon Sharon Stone does not seem to age. On Wednesday the 62-year-old Basic Instinct star shared a selfie for her 2.1M Instagram followers where she looked wrinkle free as she showed off a new sassy haircut

In the new shot, Sharon has her blonde hair coiffed just so around her face as she seems to have little makeup on.

The Casino star has no wrinkles anywhere, not around her eyes or on her neck, and does not seem to have Photoshopped the image either.

The beauty has said in the past that she does not use fillers and has not had cosmetic surgery.

She told America’s NEW YOU magazine in 2013: ‘I can’t tell you how many doctors try to sell me a facelift. I’ve even gone as far as having someone talk me into it, but when I went over and looked at pictures of myself, I thought, what are they going to lift? 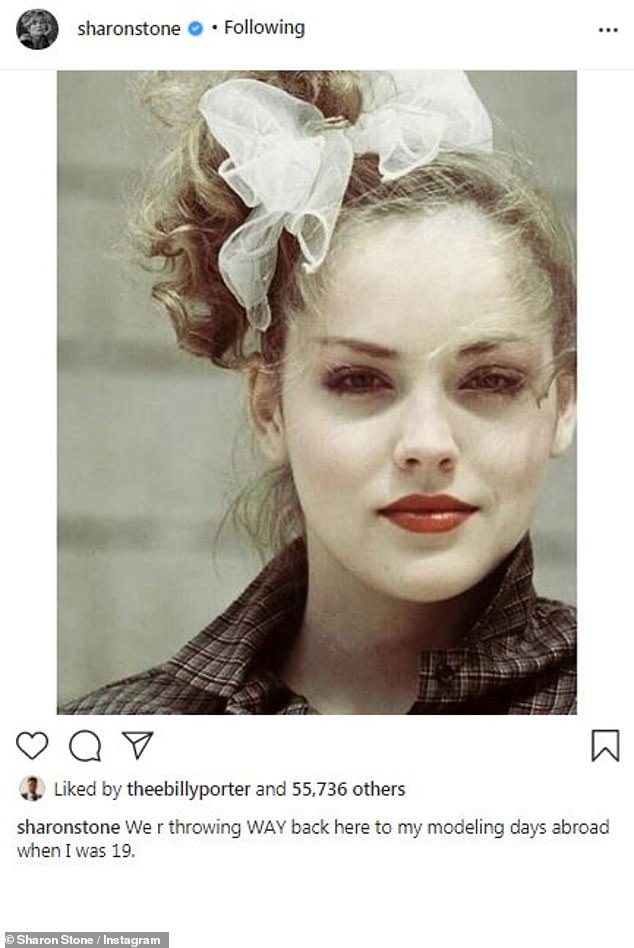 Just a teenager: This comes just after the mother-of-three posted a throwback photo from when she was 19-years-old and just starting out in modeling, proving that she has always been a natural beauty

‘Yes, I have come close – but frankly, I think that in the art of aging well there’s this sexuality to having those imperfections. It’s sensual.’

The sultry star isn’t worried about her face changing as she gets older because she has gained great cheekbones as she’s aged which compensate for other features that she has lost.

She said: ‘People are afraid of changing; that they’re losing something. They don’t understand that are also gaining something.

‘I thought I lost the deep vortex of on my eyelid that you have when you’re younger, but I gained almost a kind of beautiful abyss. As I lost the fullness in my face, I go in these great cheekbones.’ 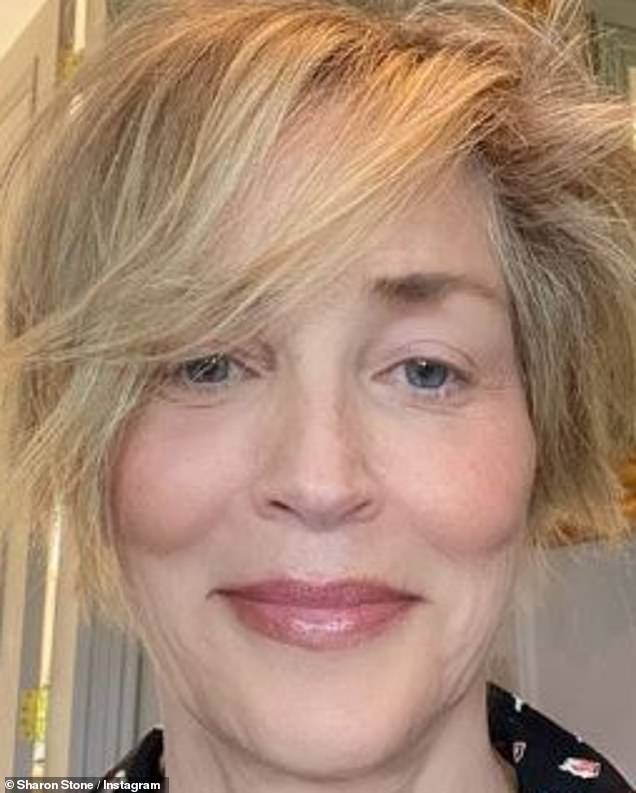 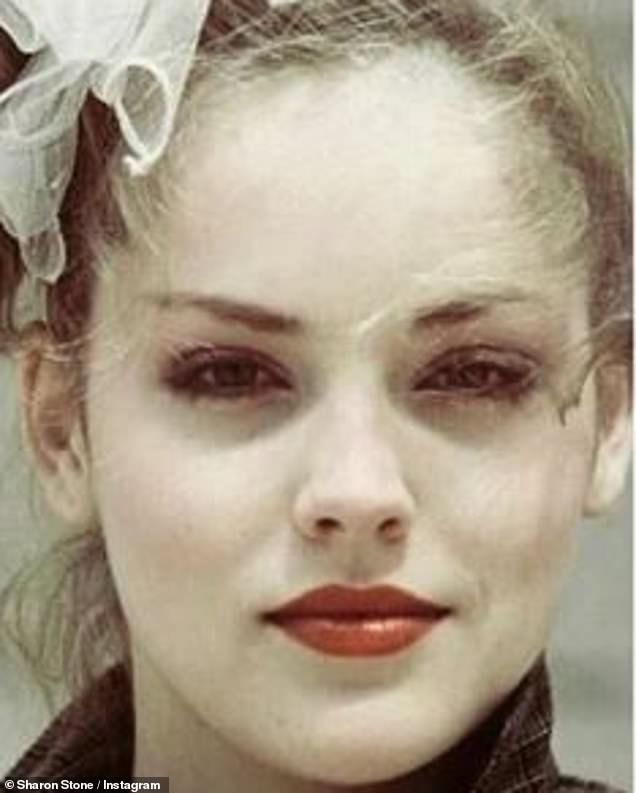 The miracle mama: The outspoken performer is seen here on the left this week and in 1978 on the right when she was only 19 and working as a model 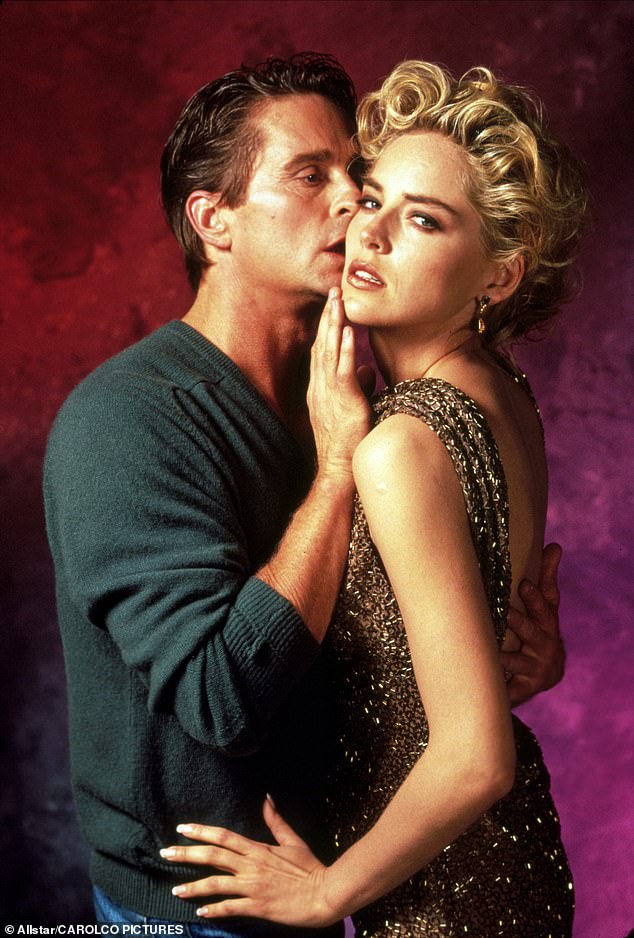 One of her biggest hit films: With Michael Douglas in the 1992 movie Basic Instinct

However, Sharon did acknowledge that surgery for some people is the right choice, although added that the rules set prior to going under the knife should be a lot more strict.

She said: ‘If you have things that you want to fix, you should go right ahead and fix them. I don’t think there is anything wrong with cosmetic surgery at all. I think it’s great. But I don’t think it’s alright to distort yourself.

‘You can’t treat an illness with cosmetic surgery, and that’s why it would be great if there were qualified therapists in plastic surgeons’ offices, and that people would go to a therapeutic meeting before plastic surgery.

‘I think that should be part of the FDA requirement.’

This comes after the former Mensa member looked slender and toned as she wore a bathing suit while sitting in an outdoor sofa by the swimming pool of her Beverly Hills mansion with a Pellegrino by her side.

The looker was chatting with a female friend and sat near her two dogs Joe and Bandit as she said she was enjoying a ‘Sunday Fun day.’ 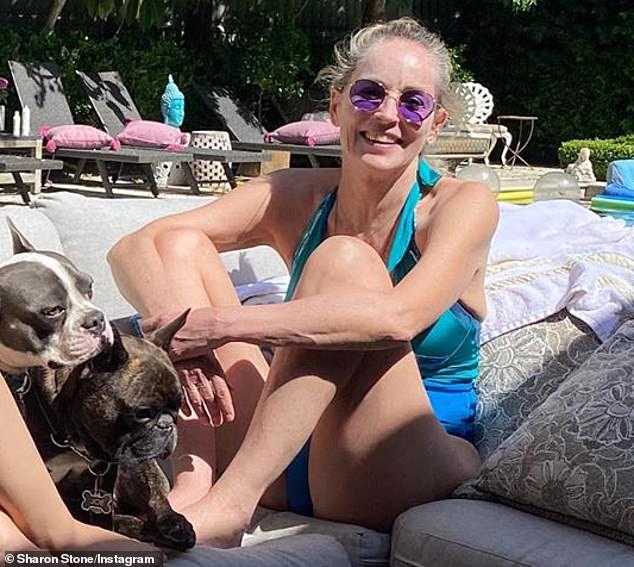 At home: The humanitarian  looked slender and toned as she wore a bathing suit while sitting in an outdoor sofa by the swimming pool of her Beverly Hills mansion with her two dogs

The blonde bombshell had on purple tinted sunglasses by Alain Afflelou Óptico.

And the Total Recall star wore what appeared to be a one piece suit in green and blue as she sat with her knees up.

Next to her was a pal who looked toned in a blue bikini as they seemed to be having a catch up. 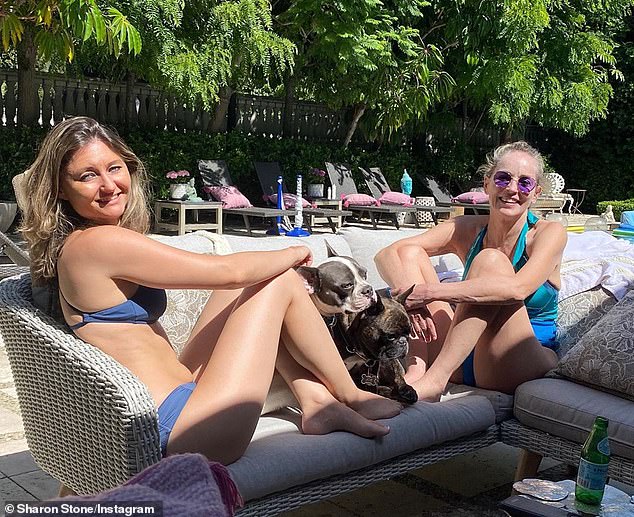 Talk to me: Next to the movie star of 40 years was a pal who looked toned in a blue bikini as they seemed to be having a catch up

‘Thank you @afflelou_optico for the #purplehaze. (: @pricearana),’ said Stone in her caption as she made sure to give a shot out to her sunglasses designer.

‘SundayFunday with friends,’ the cover girl noted as she named her dogs.

In May she posted photos to Instagram of her age-defying figure in a bikini while she lounged around her pool.

She had on a summery quilt-like top with matching bottoms, along with a necklace of cowrie shells. 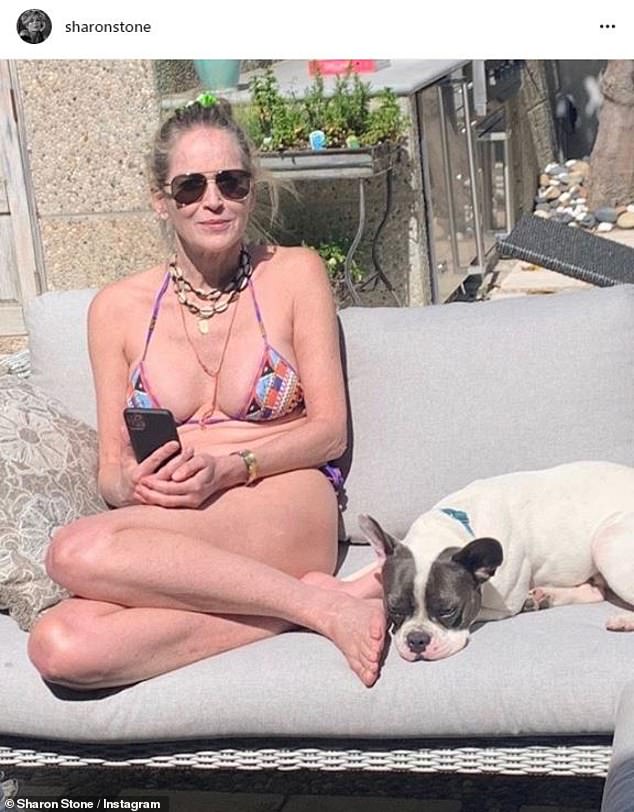 Still got it: Stone looked more youthful than her 62 years in a series of bikini photos shared to her Instagram on Saturday as she lounged by her pool while quarantining

Sharon added some flair with a gold luxury wristwatch, and she blocked out the piercing sun with a pair of aviator sunglasses.

‘Happy Mémorial Day weekend. Thank you for Your Service. Stay Safe,’ she wrote, addressing the caption from herself and her cute French Bulldog Bandit.

The 5ft9in Oscar nominee tried something cheekier in an earlier poolside photo.

She stood tall and revealed her trim figure while wearing a bizarre metal helmet that appeared to be inspired by the British rapper MF Doom, whose mask was in turn inspired by the Marvel comics villain Doctor Doom.

‘Keepin my head together,’ she joked in the caption.

Two of Sharon’s friends floated around in the pool in the picture, while Bandit followed close at her heels. 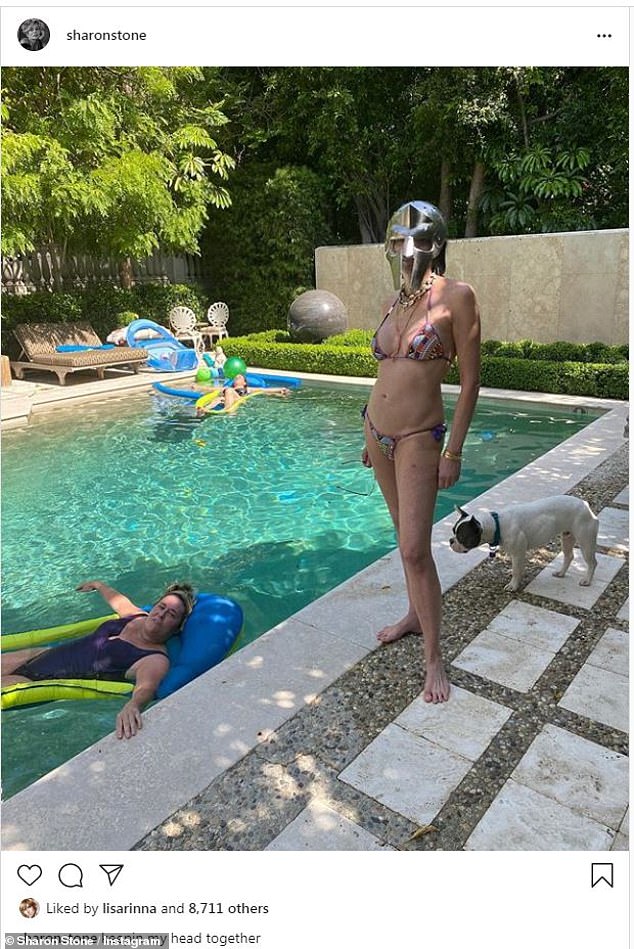 Sense of humor: She wore a skimpy quilt-like bikini, as well as a bizarre metal mask in one photo that seemed inspired by the British rapper MF Doom