His sitcom has been voted the best Christmas special of all time – but Stephen Merchant hasn’t always liked standing out.

The 6ft 7in comedian, who created The Office with Ricky Gervais, today reveals that it was being self-conscious about his size that drew him to comedy in the first place.

‘Trying to be funny or doing school plays was a way of taking ownership of standing out,’ he tells BBC Radio 4’s Desert Island Discs. ‘If people are going to look at you, they may as well look at you and think what you are doing is good or funny or entertaining rather than just pointing and laughing. I guess I was a nerd and I felt a bit awkward because I was 6ft 7in even from a young age.

‘It’s one of those things you wished you knew when you were young. If only I had realised that being tall is regarded as an asset. At the time it just made me feel self-conscious and I wanted to be shorter.’

However, he also said he had a ‘weird sense of self-belief’ that helped him and Gervais create The Office – and persuade the BBC to commission it. ‘There was an arrogance about us,’ he said. ‘I had the arrogance of youth. I think with Ricky he had quite happily got into a groove in life. He felt he didn’t have anything to lose. Ricky was willing to walk out of a room if he didn’t get his way.’

Set in Slough paper company Wernham Hogg, the show ran for two series in 2001 and 2002, followed by a two-part special in 2003 which recently topped a Radio Times poll to find the best Christmas sitcom.

Merchant, whom Gervais has described as resembling ‘an upright lizard being given an electric shock’, made only one appearance in the show as Oggy the Ogg Monster, before going on to star as agent Darren Lamb in Extras, which he also co-wrote with Gervais. 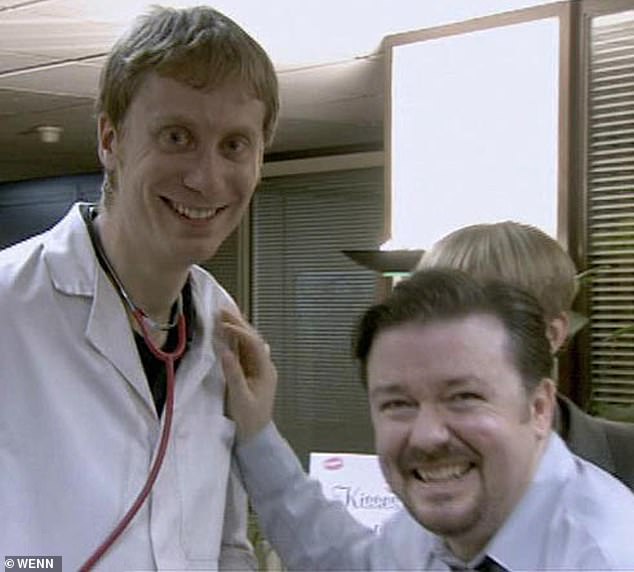 Merchant created The Office with Ricky Gervais. He made only one appearance in the show as Oggy the Ogg Monster (left)

He says he was inspired to get into comedy by another tall comedian, the 6ft 4in John Cleese. ‘I don’t remember where I got this grand idea that I could somehow be John Cleese,’ he says.

‘That was my over-riding passion from my mid-teens. John Cleese had grown up in Weston-super-Mare not far from Bristol where I grew up. He was tall and he was very funny and very British. It’s almost like I thought, “If they want tall people from the West Country I can do that.” ’

Despite his success, Merchant has yet to meet his idol. The nearest he came was when his parents found themselves on a cruise with the Fawlty Towers star and asked for an autograph. Cleese told them: ‘I am an enormous fan.’

‘That was a big thrill’, Merchant says. ‘In a way I don’t feel I need to meet him now. That was all I needed.’