As Rose Ayling-Ellis danced her way into the nation’s hearts on Strictly, one key figure in her life was rarely seen – her boyfriend.

Samuel Arnold had remained in the background as the EastEnders actress, 27, and her professional partner Giovanni Pernice, 31, put in the hard hours of practice each week in the studio.

Having not appeared in the weekly rehearsal clips, which often feature the celebrity’s loved ones, Samuel was finally caught on camera in the audience on Saturday night, as he watched his girlfriend crowned this year’s winner. 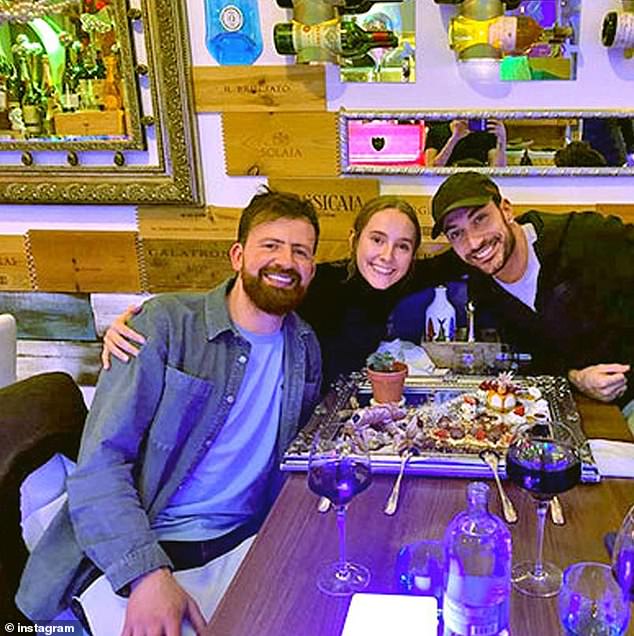 Loved-up: Strictly winner Rose Ayling-Ellis, 27, had wanted to keep her romance with Samuel Arnold under wraps during her time on the show but he showed his support in Saturday’s final

He was seen celebrating in the crowd alongside Rose’s mother Donna as the actress made history, becoming Strictly’s first deaf champion.

Rose and Giovanni defeated former Bake Off winner John Whaite, 32, and his professional partner Johannes Radebe, 34, who also made history as the first all-male pairing on the show.

It is believed that Rose had wanted to keep her romance with Samuel, who is also deaf, out of the spotlight while the show was on. It is understood he has been in the studio audience several times. 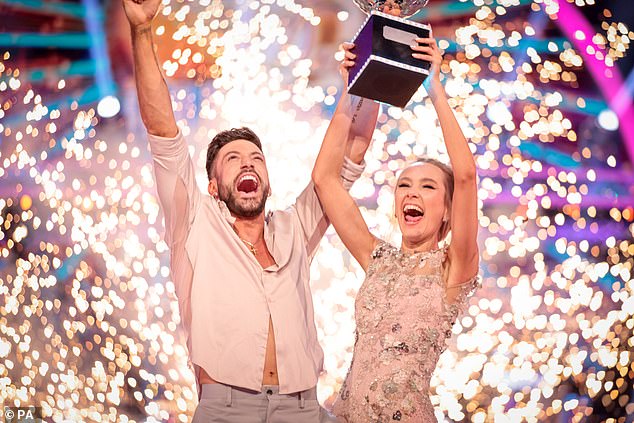 On Saturday, Samuel, who has been with Rose for about seven years, was seen on his feet and clapping in sign language after her second dance.

A peak audience of 12.3million – and an average of 11million – tuned in to BBC1 for the highly charged final, which saw the celebrities, their professional partners, judges and even the presenters frequently struggling to keep their emotions in check.

About 14 minutes of the 110-minute show – more than 10 per cent – was taking up with people crying and fighting back tears, research shows. 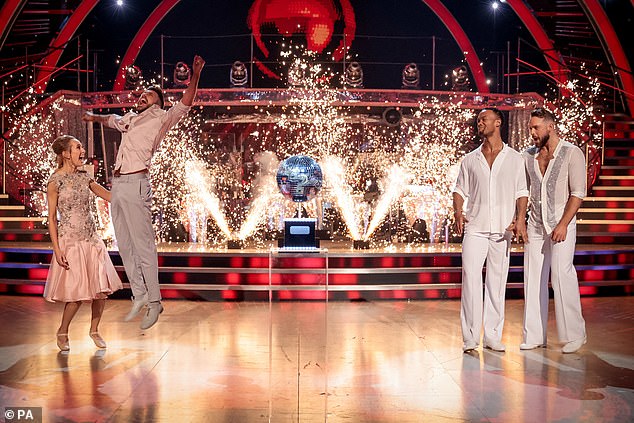 Gracious runner-up: Viewers watched as Rose managed to pip John to the post after they both drew on the leaderboard with the same near-perfect scores

This included Johannes becoming emotional after dancing the rumba and comedian Judi Love, 41, the fifth contestant to be voted out in this year’s series, drying her eyes when the dance finished.

John also fought back tears when talking about his experience on the show and, with Johannes, was struggling again after their show dance.

Rose cried when she spoke about her experience on the show, while both she and Giovanni broke down when talking about their last day of training and again after they performed their show dance. 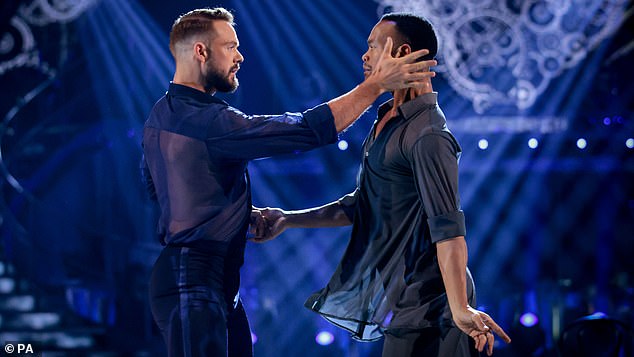 Judge Anton Du Beke, 55, struggled to keep it together as he gave the couple their feedback on their show dance, while fellow judge Motsi Mabuse, 40, cried when talking to John and Johannes about one of their routines.

AJ Odudu, 33, broke down when she described her heartbreak at missing out on the final, through an injury suffered in training last week, during an interview with presenter Claudia Winkleman, 49.

Rose’s participation and success has been described as a massive step forward for disability representation. After performing a Romeo and Juliet-inspired show dance with Giovanni to The Rose, by Bette Midler, she said: ‘I’ve become more me than I’ve ever been because of Strictly.’ 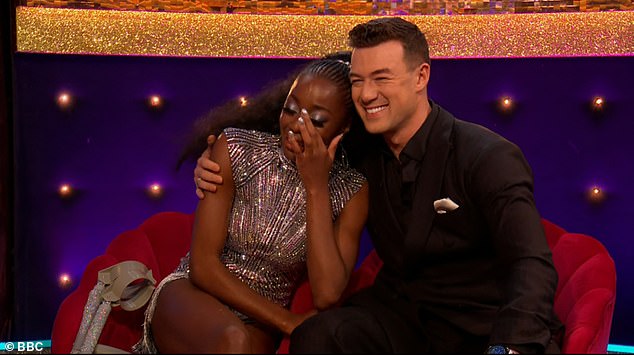 In tears: For the first time, just two finalists competed after AJ Odudu was forced to pull out of the competition on Friday, due to an ankle injury which left the presenter in crutches 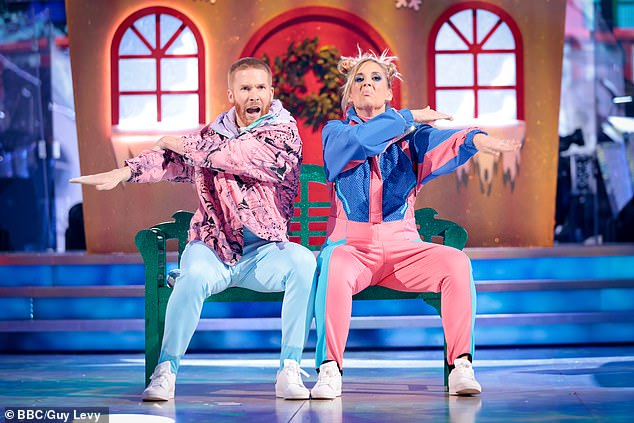 Of her victory, she told The Guardian yesterday: ‘I was so shocked. It felt like I was out of my body for a moment. We celebrated last night. There was a bit of prosecco and dancing.

‘The first week, I was like, “Everyone’s going to be expecting a deaf person to dance really badly”. Hopefully, it will change the way people look at deaf people. Giovanni is such a good teacher, and he’s really adapted to the way I learn.’

Ratings have gone up over the series – the launch show in September was watched by an average of seven million viewers. 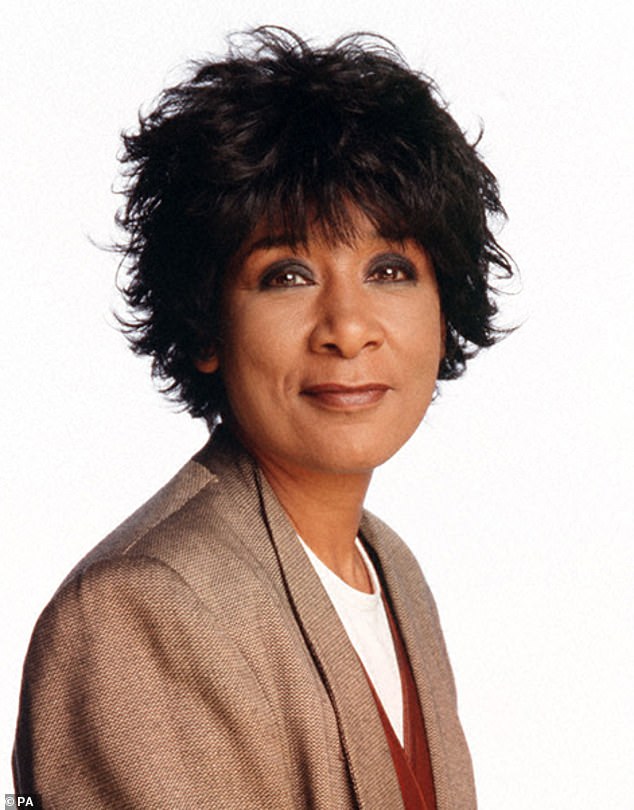 Screen star: Newsreader Moira Stuart, 72, is also set to appear on the festive special when it airs on BBC One on Christmas Day