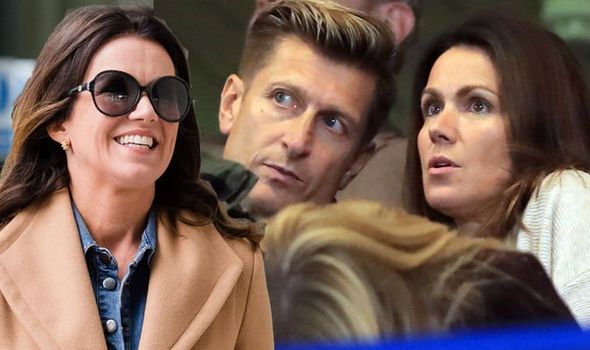 Good Morning Britain sensation Susanna Reid, 49, was spotted walking the streets of Soho with Crystal Palace’s Steve Parish, 55, who she separated from in April last year. The ITV favourite dated her former beau for nine months after confirming their romance in December 2018.

Earlier this week, Susanna, who is currently taking a break from her presenting duties with Piers, was spotted with Steve’s arm around her as they walked through central London.

The GMB host donned a short patterned dress and heels, while the billionaire was covered head to toe in black for the evening.

The pair are believed to have split after their relationship “fizzled out”.

Express.co.uk has contacted a representative for Susanna Reid for comment.

In another picture, the businessman appears to be kissing Susanna’s forehead as they wrapped their arms around each other.

It is believed they later hailed a taxi together after their night out.

“They looked totally into each other,” a source claimed.

“If ever it was in doubt whether they were an item again, this shows they are.”

They continued to tell The Sun: “Steve had his arms protectively around Susanna and tenderly planted a kiss on her head at one point before they flagged a cab.”