Sylvester Stallone was in good company as he hosted a boxing party with pal Arnold Schwarzenegger to watch the Anthony Joshua vs Andy Ruiz Jr match on Saturday.

In an Instagram snap, the screen star, 73, appeared to reflect on his Rocky heyday as he supported sportsman Andy, 30, from his Californian home alongside the likes of boxing legend Sugar Ray Leonard and actor Al Pacino.

The actor – who has played the role of The Italian Stallion boxer since 1976’s Rocky – treated his A-list visitors to snacks, magic tricks by illusionist David Blaine and even a peek inside his first-ever script for the sporting film series. 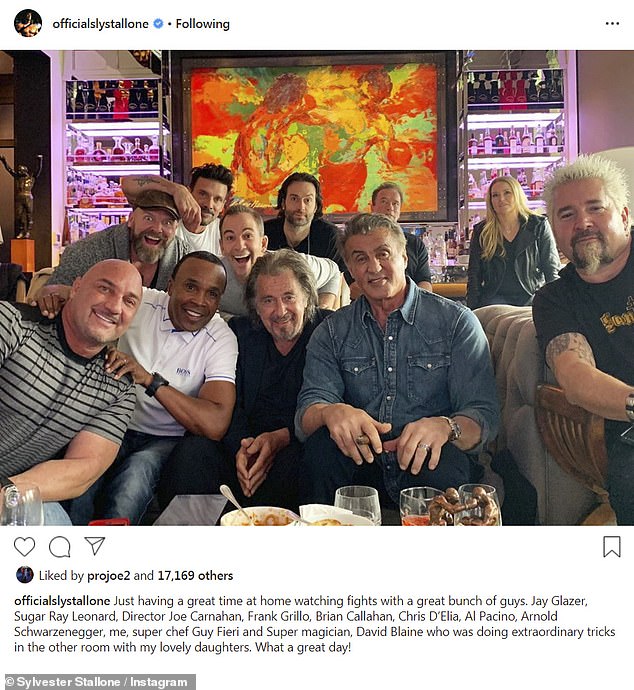 With a cigar in hand, the Creed star was in great spirits as he watched the lively match – which saw Anthony, 30, regain world heavyweight titles – with his pals.

The Lords of Flatbush actor looked as youthful as ever as he sported a fitted denim shirt for his homely bash, while Terminator’s Arnold, 72, enjoyed some downtime with his girlfriend Heather Milligan.

In the eight films spanning from the mid 70s till 2018, Sylvester’s character Rocky Balboa forges a successful career as a pro boxer.

The media personality captioned the image: ‘Just having a great time at home watching fights with a great bunch of guys. 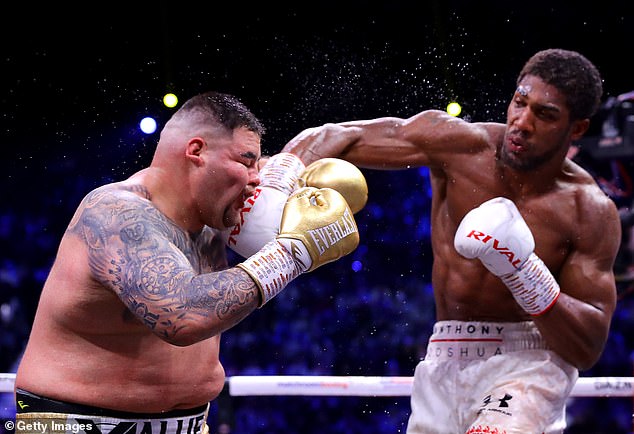 What a punch! The screen star, 73, supported sportsman Andy, 30, from his Californian home alongside the likes of boxing legend Sugar Ray and actor Al (Andy and Anthony pictured) 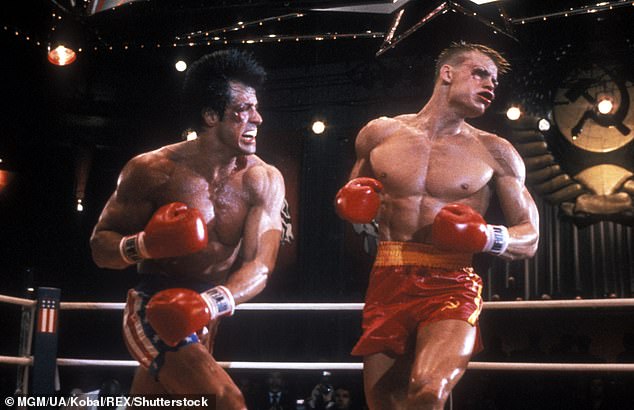 Heyday: In the eight films spanning from the mid 70s till 2018, Sylvester’s character Rocky Balboa forges a successful career as a pro boxer (pictured in Rocky IV – 1985)

‘And super magician, David Blaine who was doing extraordinary card tricks in the other room with my lovely daughters. What a great day!’

In a separate image, director Joe shared his delight as Sylvester showed him the first ever copy of his script for Rocky.

The Bad Boys for Life writer penned on Twitter: ‘No biggie. Just @TheSlyStallone showing me the first ever copy of his Oscar winning script for ROCKY.

‘I don’t think people appreciate how brilliant a writer he is. That script is flawless. How many unforgettable scenes are in that film? Give me your favorite.’

On Saturday, sportsman Anthony unanimously thrashed Andy in a no-holds-barred revenge of this summer’s humiliating knockout to the ’20-stone no-hoper’.

The British boxer blitzed his opponent with a flurry of jabs early on before clattering him with a massive eye-splitting punch to the face.

After his convincing victory – confirmed by the judges after the bout went the full 12 rounds – Joshua was presented with the IBO, IBF, WBO and WBA belts that Ruiz stripped him of in a shock knockout a few months ago.

But the Watford-born fighter dominated the clash in Saudi Arabia and rarely looked under threat of being dealt a second defeat. 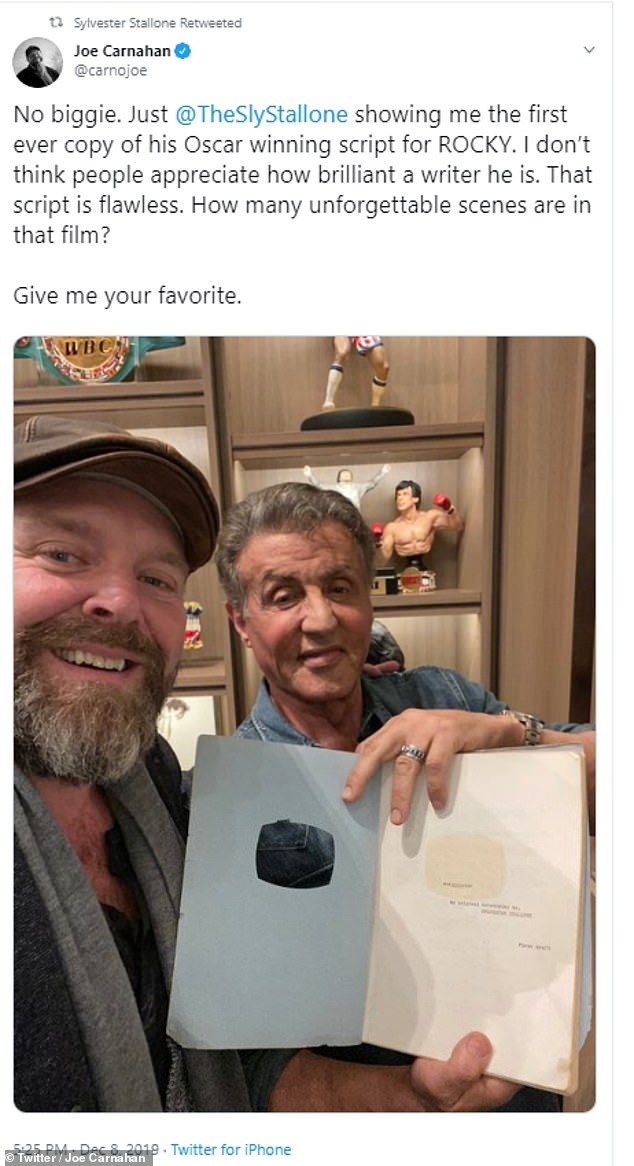 What a treat: The actor treated his visitors to snacks, magic tricks by David Blaine and even a peek inside his first-ever script for the sporting film series (pictured with director Joe)

Yet while high-octane drama unfolded in the ring, thousands of fans packed into the open-air stadium had their night spoiled by giant orange pillars blocking their view.

Despite forking out thousands of pounds to watch the highly-anticipated bout in a new purpose-built stadium, spectators were left dismayed after arriving to see their seats behind the pillars.

The 15,000-seat Diriyah Arena was put up in just two months and will be torn down after the fight, which was also dampened by bad weather.

The heavens opened earlier above the outdoor stadium, forcing soggy spectators to throw on their ponchos in he middle of the desert.

Blood trickled down cheek of the Mexican-American boxer after the first few rounds following a colossal right hand from Joshua.

Andy’s June win in New York was a huge upset, with few predicting the thickset underdog who was parachuted in to fight at the last minute would triumph over the then undefeated Joshua.

Confirmation of Joshua’s win was greeted with roars of approval from a capacity 16,000 crowd in the purpose-built venue in the ancient Saudi capital, which was hosting a major title fight for the first time. 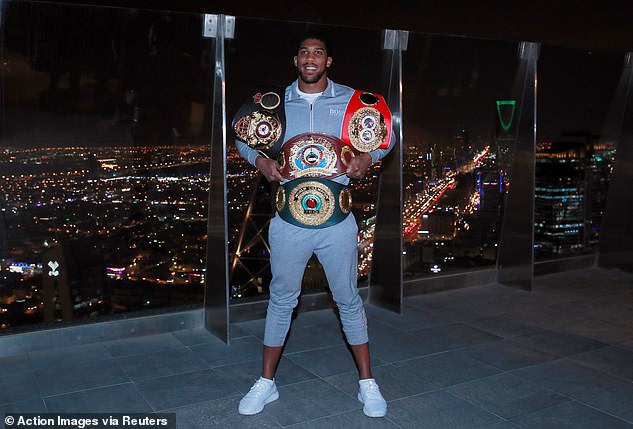 Impressive: On Saturday, sportsman Anthony (pictured in Sunday) thrashed Andy in a no-holds-barred revenge of this summer’s knockout to the Mexican ’20-stone no-hoper’