Home » Celebrities » Tara Reid, 45, in 'terrible' pain after getting the COVID-19 vaccine

‘I feel like I got shot by a gun!’ Tara Reid, 45, reveals she’s been left in ‘terrible’ pain after getting the COVID-19 vaccine… as she urges others to get the jab and wishes them ‘good luck’

Tara Reid has revealed she received the COVID-19 vaccine on Tuesday, as she shared a snapshot of herself receiving the jab.

The American Pie actress, 45, took to Instagram to share a snap of a medical professional administering the vaccine, as she admitted it left her in ‘terrible’ pain.

Captioning the image, which showed her wearing sunglasses and a mask, she wrote: ‘Got vaccinated I have to [tell] you the truth it hurts terrible I feel like I got shot by a gun in my arm #getvaccinated #goodluck #covidvacccine’ (sic) 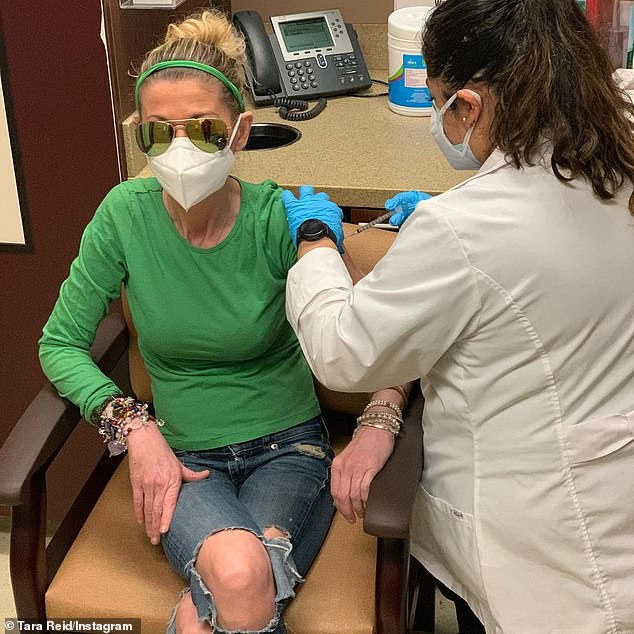 COVID vaccine: Tara Reid has revealed she received the COVID-19 vaccine on Tuesday, as she shared a snapshot of herself receiving the jab

In the shot, Tara was seen wearing a green long-sleeved T-shirt and matching headband, which she teamed with ripped jeans and a large collection of bracelets.

While she shared the image, late Thursday night, she later explained that she actually received the jab on Tuesday, as she explained her choice of ensemble.

She wrote: ‘I love you guys so much! So yes it really does hurt and I agree, I didn’t even feel the needle either. But then about 1 hour later I felt like I got shot by a bullet. Got my first shot on St Patrick’s Day hence the green luck of the Irish lol.’

Tara’s vaccination news comes after she claimed she had previously been ‘misjudged’ as a ‘party girl’, which eventually damaged her career. 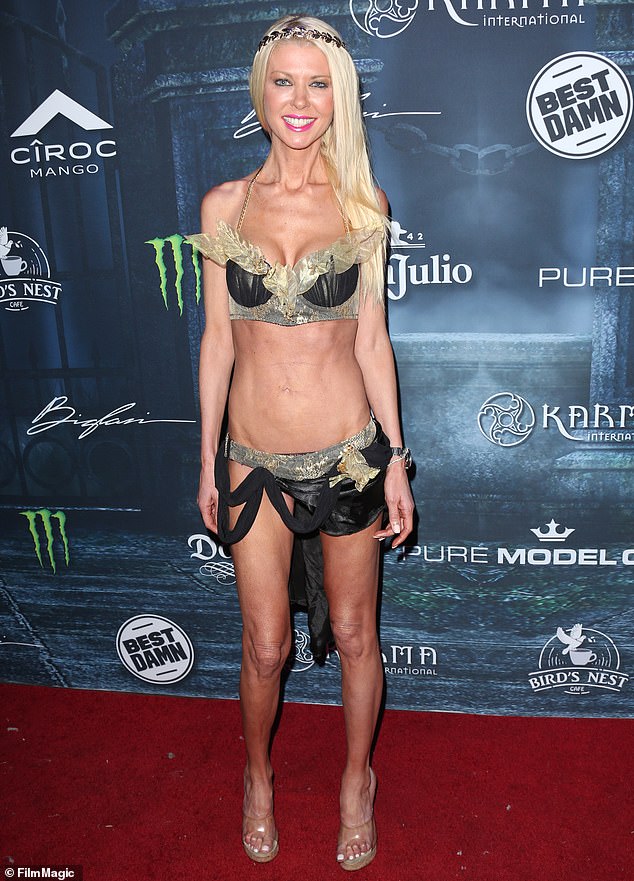 Pain: The American Pie actress, 45, took to Instagram to admit the jab left her in ‘terrible’ pain 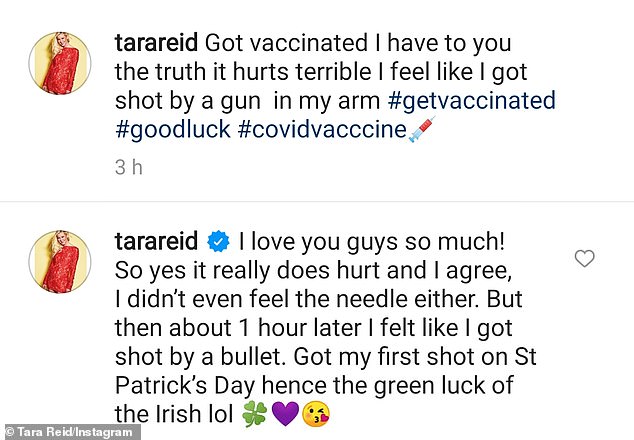 The actress went through a ‘frustrating’ time in the early 2000s when she struggled to find work, which she believes is because people had a misconception that she was wild, even though she never did ‘anything bad.’

And the Van Wilder star still feels like she was ‘punished’ just for having fun.

‘I didn’t work for a while. That was really frustrating. ‘[It bothered me] that [people thought] I was just a party girl and thought I wasn’t anything else because that wasn’t true…It didn’t make sense to get punished for having fun,’ said the Sharknado star.

‘I never got in trouble or got a DUI or do anything bad really. So I feel like it wasn’t right. I felt really bullied by the studios and a lot of people and very misjudged.’

The star was known for partying at Los Angeles clubs with the wild stars including Paris and Nicky Hilton as well as Paris’ Simple Life co-star Nicole Richie. 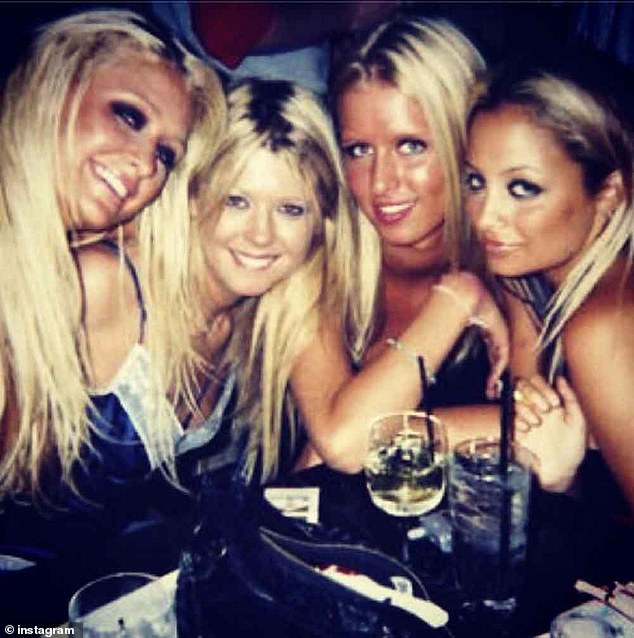 Career: Tara’s vaccination news comes after she claimed she had been ‘misjudged’ as a ‘party girl’, which damaged her career. Pictured with (L-R) Paris Hilton, Nicky Hilton and Nicole Richie

The star decided to make the move into producing in order to ‘fix’ her reputation.

She said: ‘That’s also one of the reasons why I started to do this because I’m like, ‘If I don’t fix this, it’s not going to get fixed.

‘So that’s when I said, ‘OK, we’re going to turn this around, people are going to realise how smart I am, how I’m producing, how I’m creating all these things and then they’re going to have to stop because they can’t keep picking on you.’

‘It was almost cool to pick on me and it’s not… I’m not gonna wait for a script because I’m not gonna do that anymore. So I was like, ‘I’m gonna create my own parts and I’m gonna produce them. This is a really exciting time for me.’

And though acting is still Tara’s ‘favourite thing to do’, she’s loving her new role behind the scenes. 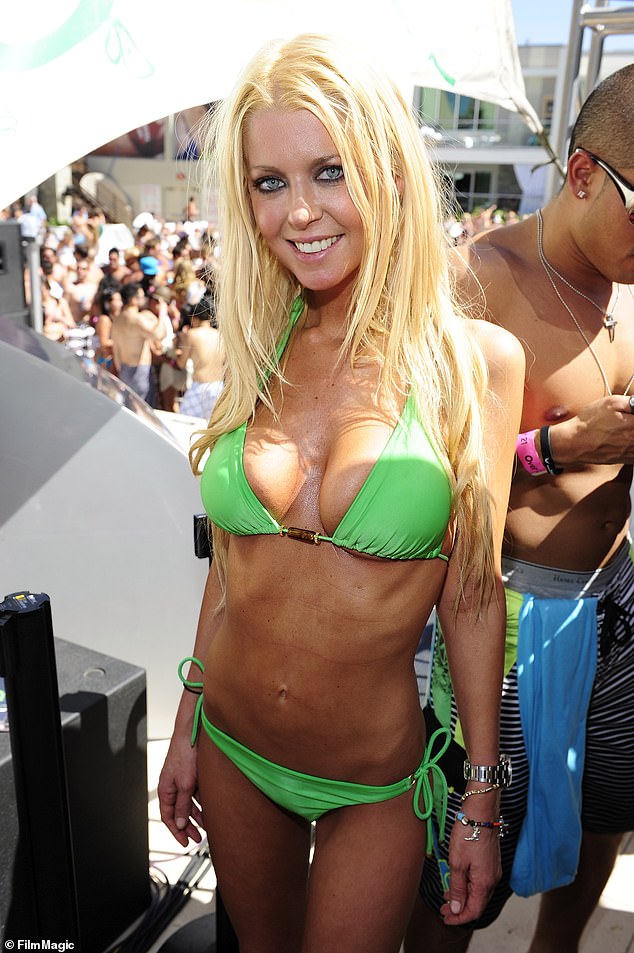 Reputation: The star decided to make the move into producing in order to ‘fix’ her reputation. Pictured in 2010

She told Entertainment Tonight: ‘Becoming a producer has been so exciting and so different than acting. I didn’t realise how much goes into a film.

‘I wanna be a really good businesswoman. Not just acting and producing, but making some brands, getting into the fashion world, just having my hands in a little bit of everything.’

This comes after her contemporary Britney Spears became the subject of a Hulu documentary called Framing Britney Spears, which examined the way she has been treated by the public and those close to her throughout her career.

The pop siren was seen being ridiculed by comedienne Sarah Silverman and being hurt by her ex Justin Timberlake. And Spears had to deal with sexism in her industry. Her conservatorship run by her father Jamie Spears was also examined. 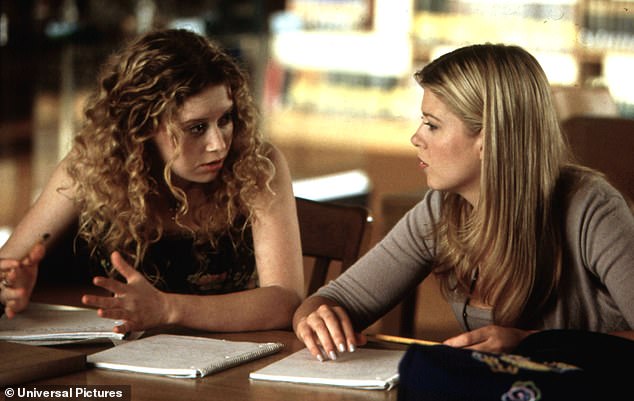