The Crown star Helena Bonham Carter snapped back into character as grieving Princess Margaret on Tuesday as filming resumed for series four of the acclaimed Netflix drama.

The actress, 53, was clad in funeral attire as she arrived on-set with Olivia Colman to film the funeral of Lord Mountbatten, after he was killed by a bomb hidden on his fishing boat in Ireland in 1979.

Helena’s arrival for filming comes as The Crown’s incredible awards success continued on Sunday, as the series scooped the Screen Actor’s Guild Award for Outstanding Performance by an Ensemble in a Drama Series. 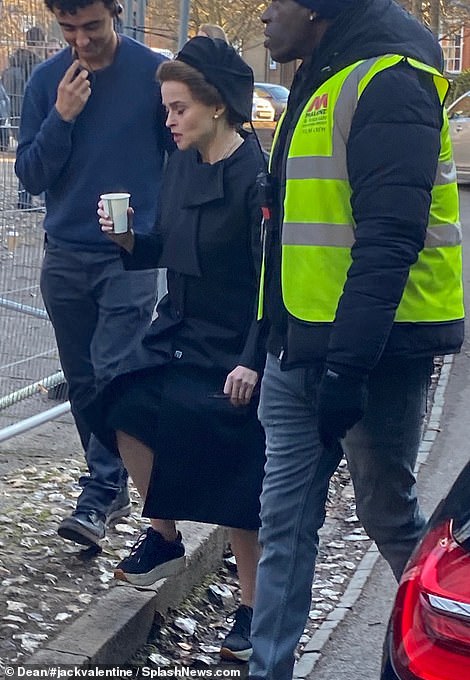 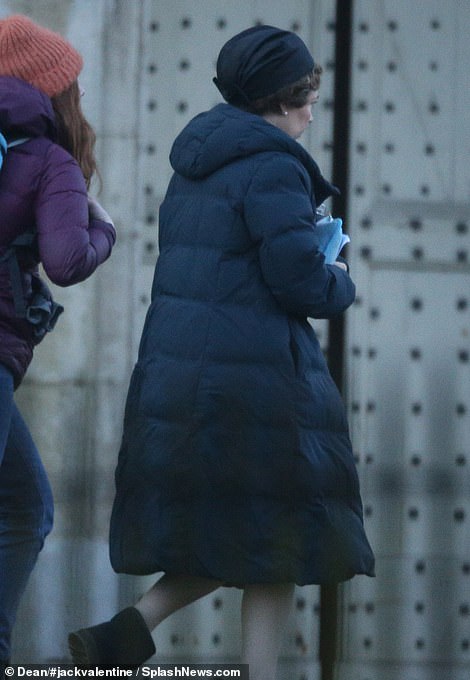 Sad: Helena Bonham Carter was clad in black attire on Tuesday as she arrived on set with Olivia Colman (right) to film Lord Mounbatten’s funeral in series four of The Crown 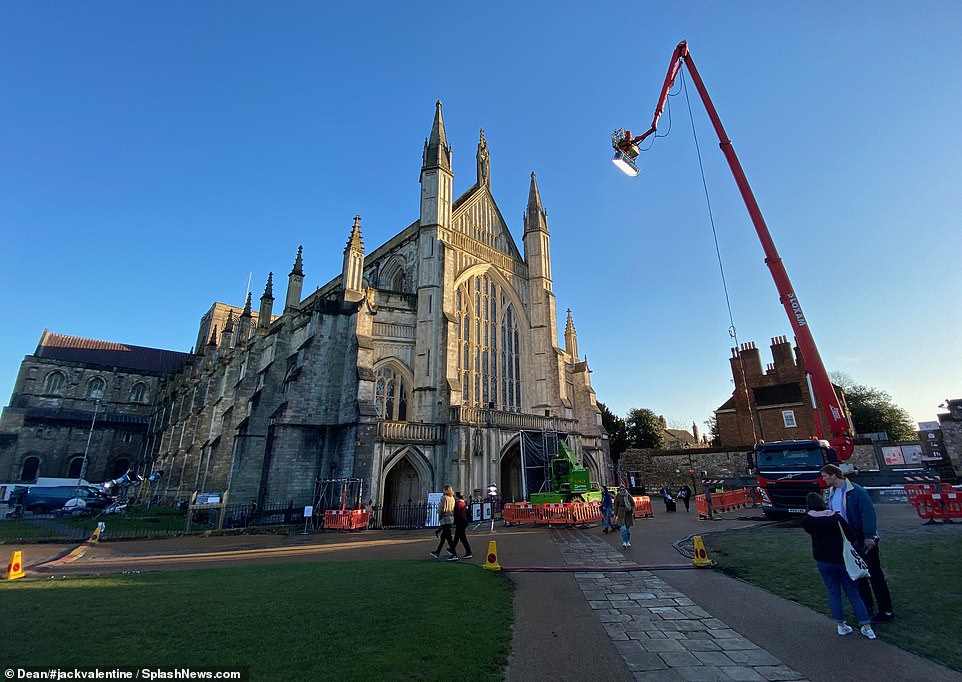 Amazing: Filming for the Netflix series took over the iconic Winchester Cathedral, the perfect landmark to mimic the emotional send-off, which originally took place in London

In a break from filming Helen was seen with a hot beverage in hand as she chatted to some of the crew members on set sporting a long black coat with a frilled detailing along with a matching hat.

Olivia was battling the chilly January climes in a thick padded coat as she arrived on set for filming, already sporting Her Majesty’s signature curls, which were teamed with comfortable trainers.

Many cast members were also clad in various military uniforms as they arrived to play dignitaries and former army comrades of Lord Mountbatten, himself a decorated war hero. 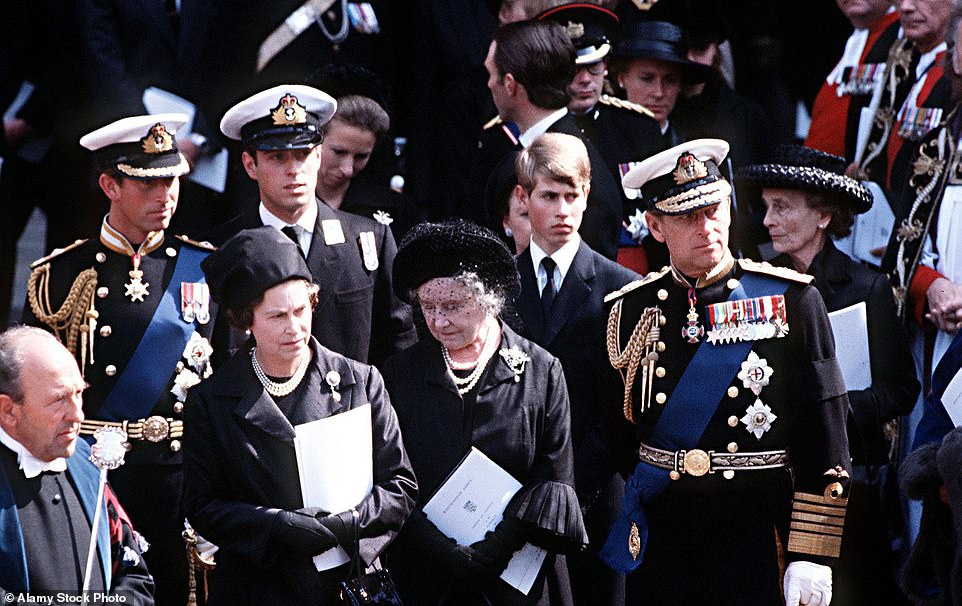 Paying tribute: Many cast members were also clad in various military uniforms as they arrived to play dignitaries and former army comrades of Lord Mountbatten, himself a decorated war hero 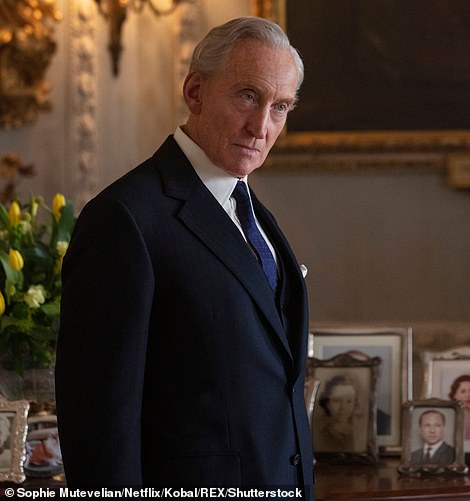 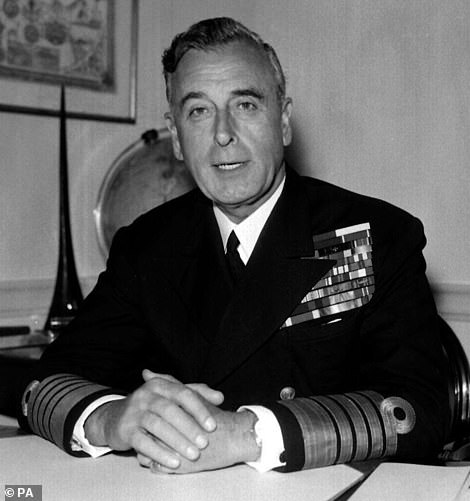 In character: Charles Dance played Lord Louis Mountbatten of Burma in The Crown’s third series (left). During WWII, he was Supreme Allied Commander (pictured right in 1959) 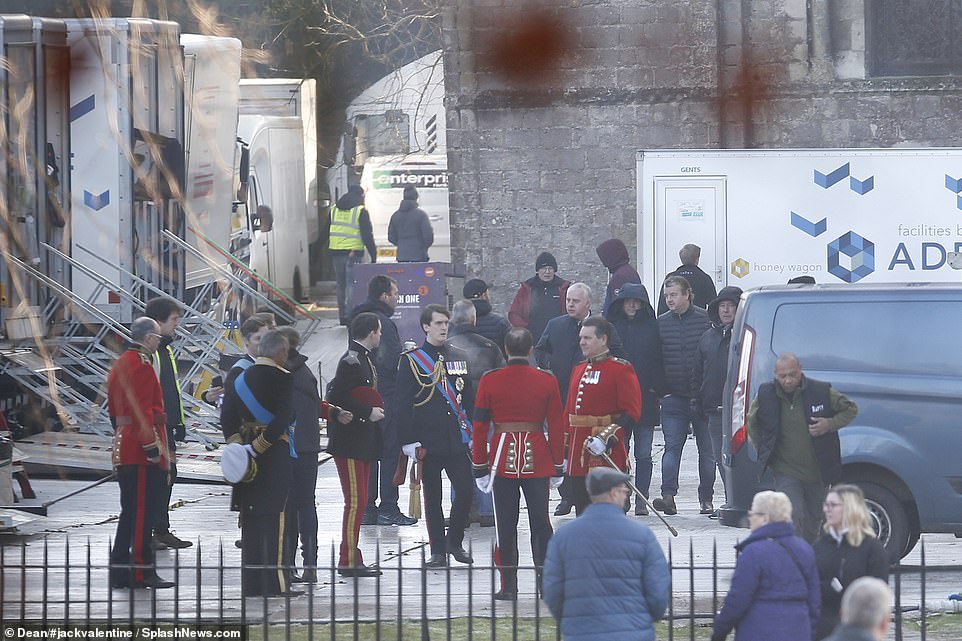 Lord Mountbatten made his first appearance on The Crown during its third series, when he became embroiled in a scheme by The Daily Mirror’s then-Chairman Cecil Harmsworth King to get ride of Prime Minister Harold Wilson following his decision to devalue the pound.

Despite originally agreeing to the idea, Lord Mountbatten eventually decided he couldn’t go through with the scheme without authorisation, and was reprimanded by The Queen for his actions.

His death on 27 August 1979 sparked outrage worldwide and and outpouring of condolences from public figures.

Every August, Lord Mountbatten holidayed with his daughters, Patricia and Pamela, and their families at his summer home, Classiebawn Castle, on the west coast of Ireland.

In 1979, the statesman embarked on a fishing trip from his 30-foot wooden boat with his nearest and dearest.

Later into the evening, IRA’s Thomas McMahon sneaked onto the vessel to load a bomb, which was detonated when Mountbatten returned on-board. He was carried back on shore by fisherman, but died shortly after. 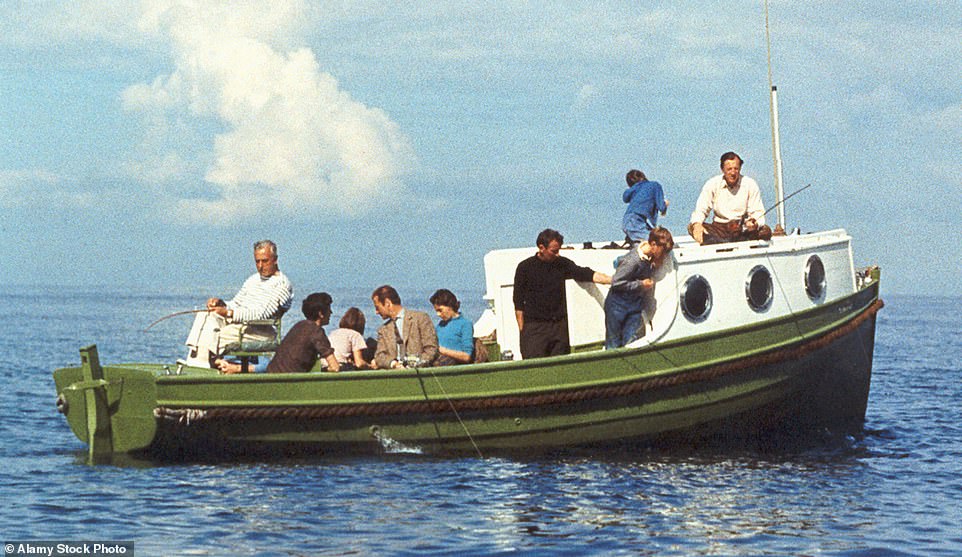 Iconic: Every August, Lord Mountbatten holidayed with his daughters on his boat Shadow V at Classiebawn Castle, on the west coast of Ireland (pictured in 1970) 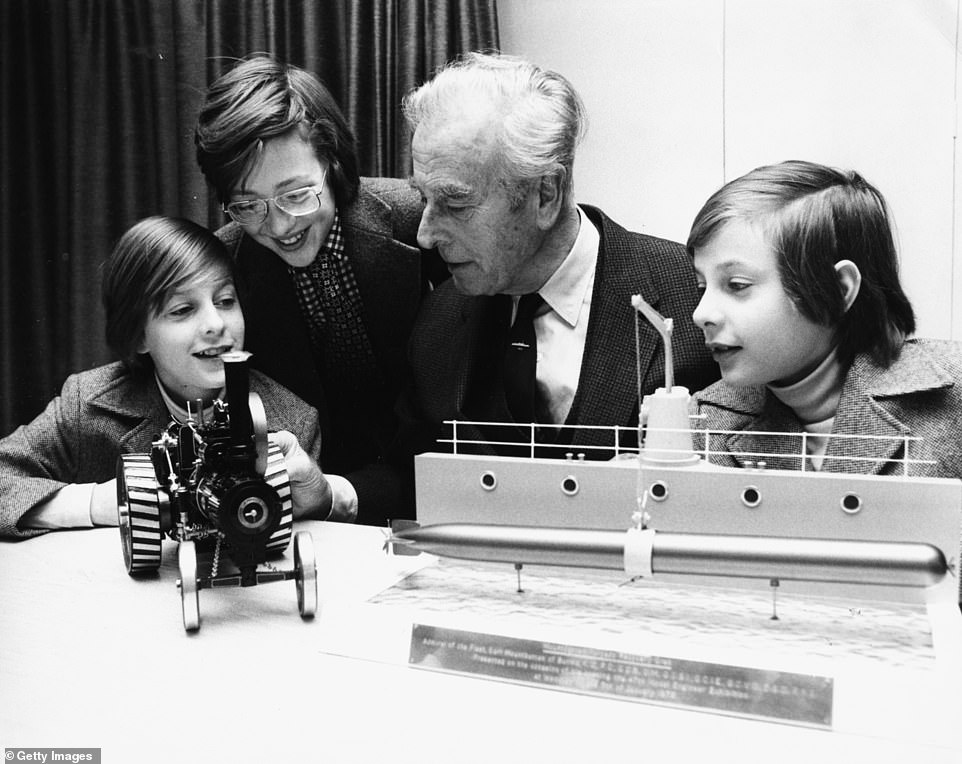 Alongside Mountbatten, his grandson Nicholas, 14, and a crew member Paul, 15, and socialite Doreen Knatchbull were killed from the attack.

The paramilitary organisation attempted to assassinate the royal a year before his murder, but missed shooting the British Royal Navy officer due to bad weather.

Shortly after the murder, The IRA issued a statement, which read: ‘The IRA claim responsibility for the execution of Lord Louis Mountbatten.

‘This operation is one of the discriminate ways we can bring to the attention of the English people the continuing occupation of our country.

‘The death of Mountbatten and the tributes paid to him will be seen in sharp contrast to the apathy of the British Government and the English people to the deaths of over three hundred British soldiers, and the deaths of Irish men, women, and children at the hands of their forces.’

It’s thought The Crown series four will pick up in 1977 and run through to 1990 – and will prominently feature the relationship and eventual marriage of Prince Charles and Lady Diana Spencer, who will be played by unknown actress Emma Corrin. 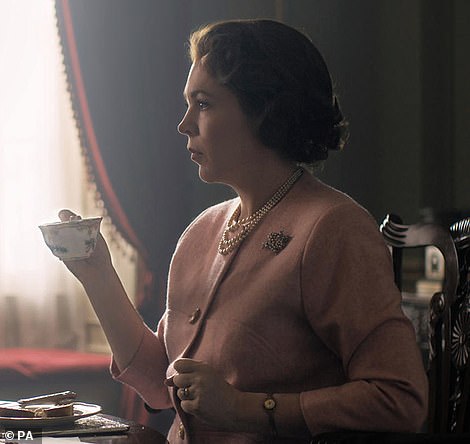 Monarch: Olivia Colman resumes her role as Her Majesty Queen Elizabeth II in the fourth series 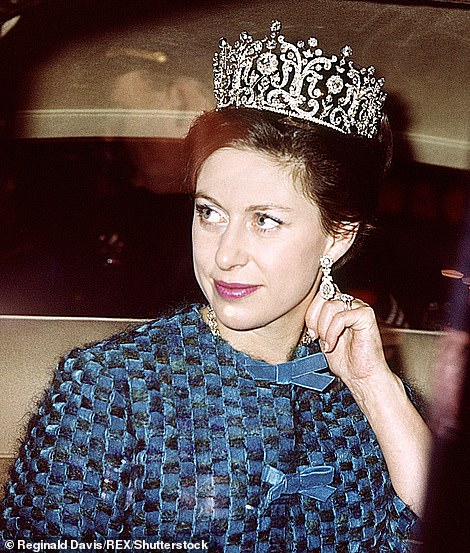 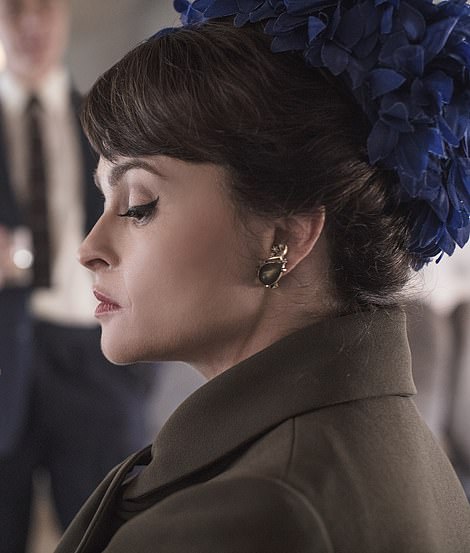 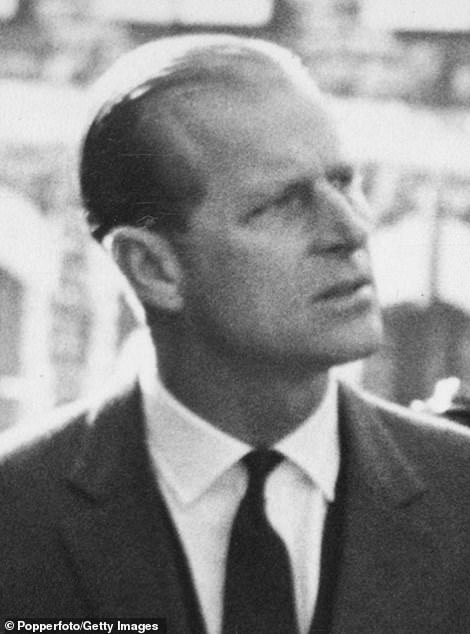 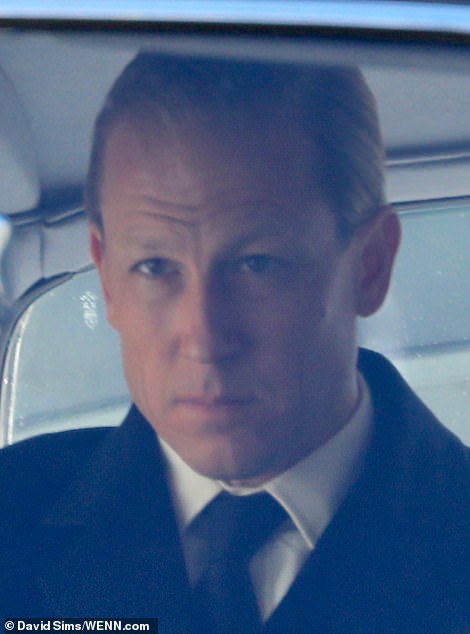