Despite accusations from fans on social media that Little Mix were dressed ‘like strippers’ for their own 2016 performance, only 38 viewers made an official complaint. 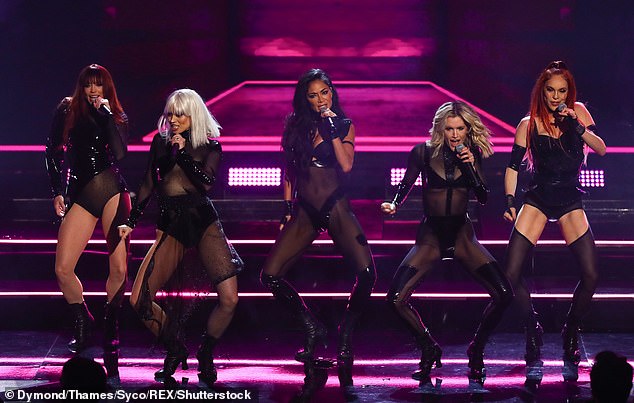 In 2016 Little Mix took to the stage for a performance of their newest single, but were viciously trolled on social media for their revealing PVC outfits.

Jesy Nelson previously defended her bandmates, telling The Sun: ‘Go away. If you’ve got nothing nice to say then bore off because we embrace every single bit of our bodies…

‘That’s what being a woman is about – being confident.’

According to The Mirror, despite the criticism Ofcom only received 38 complaints, which is far less than the Pussycat Dolls have had in recent days. 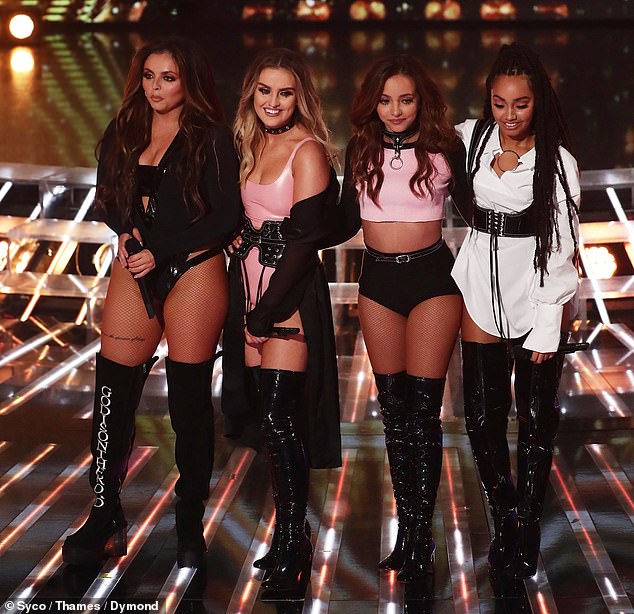 Dramatic: The English girlband’s racy display during their own X Factor performance only sparked 38 complaints from viewers, despite backlash on social media at the time

Viewers at home were stunned by the band’s pre-watershed performance on Saturday, which saw them writhe and dance around the stage in underwear, sheer bodysuits and PVC stockings.

Another added: ‘It makes me uncomfortable to see 5 grown women dancing half naked on my screen.’

Media watchdog Ofcom is now deciding whether to investigate the ITV show after the high number of complaints about the sultry performance. 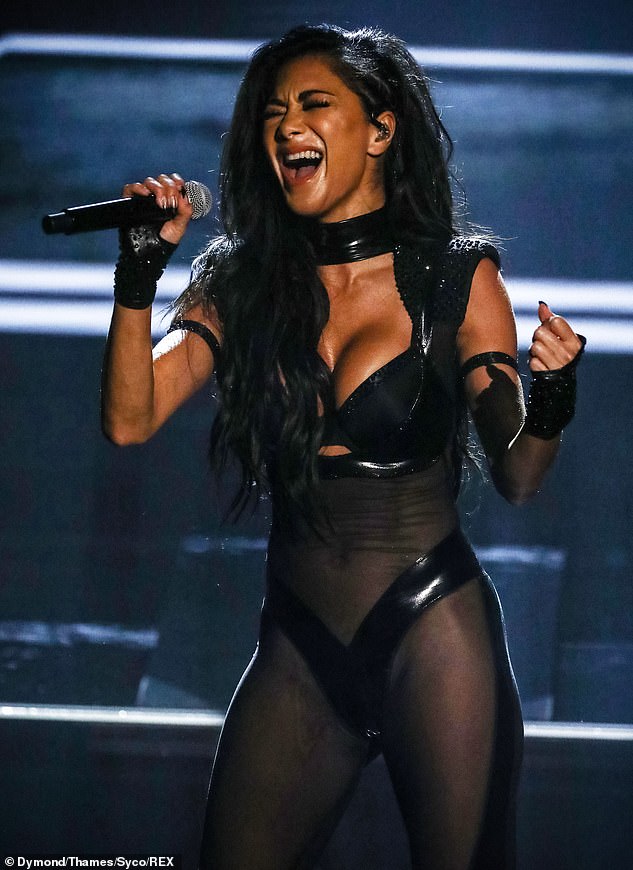 Daring display: It comes as complaints for The Pussycat Dolls’ raunchy performance soared to 640 as of Tuesday

The singers – who took to the stage without sixth member Melody Thornton, who has chosen not to return – shocked X Factor viewers with their PVC ensembles and seductive moves.

The performance came nine years after the girl band split in order to pursue solo careers.

Perhaps anticipating the complaints, lead singer Nicole proudly shared a clip of the performance to her Instagram grid. 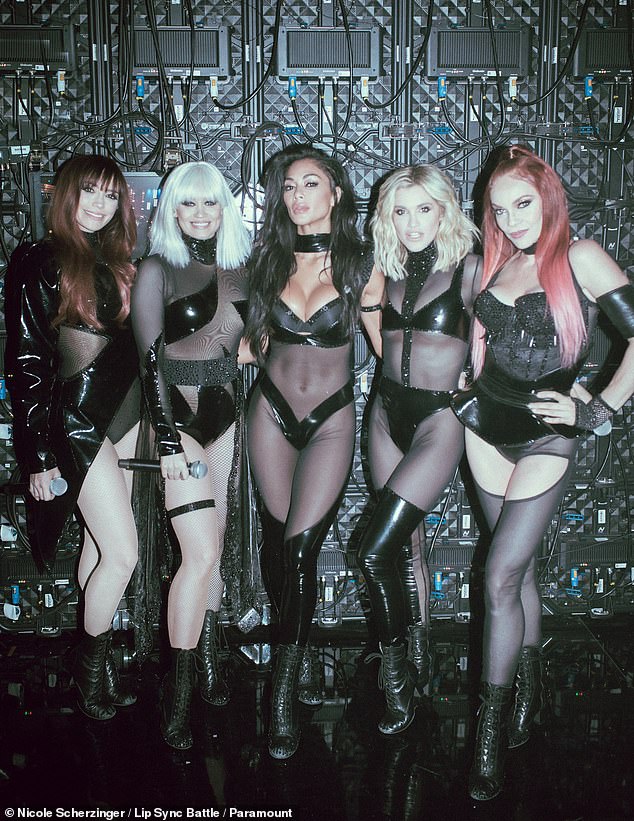 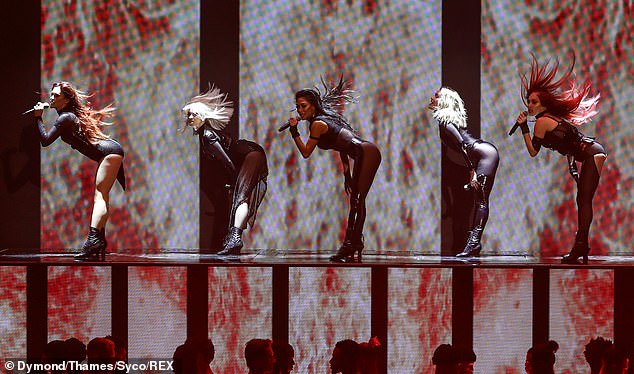 Raising eyebrows: Media watchdog Ofcom is now deciding whether to investigate the ITV show after a high number of viewers complained about the sultry performance

She defiantly captioned it: ‘Wasn’t expecting that… were you!’

She then plugged the forthcoming arena tour, adding: ‘#REACT coming soon! Get your tickets to the #PCDReunion tour at the link in my bio.’

But many who watched the show still commented on the performance.

‘Ofcom are gonna get a hammering about PCD aren’t they?’ one person tweeted.

Another posted: ‘I can see the Ofcom complaints now!’ 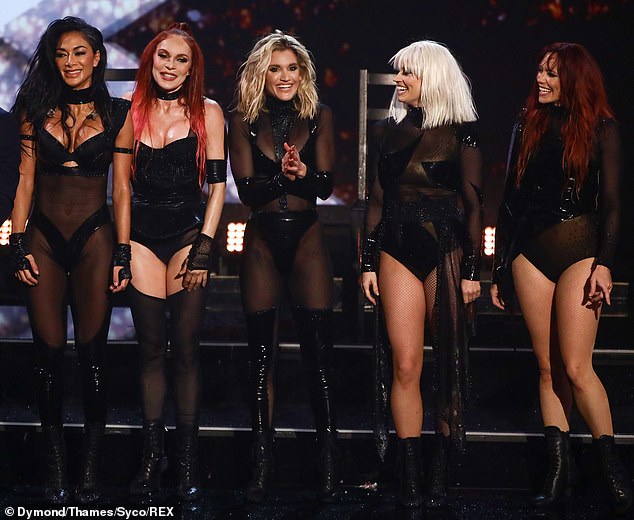 Spectacle: The band, who have also announced a reunion tour, belted out a medley of hits 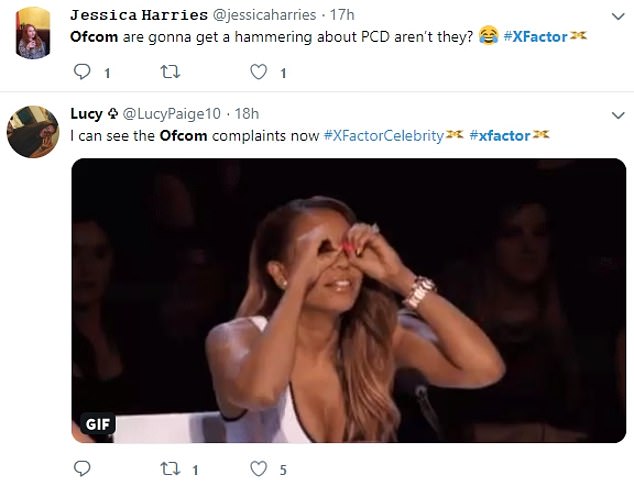 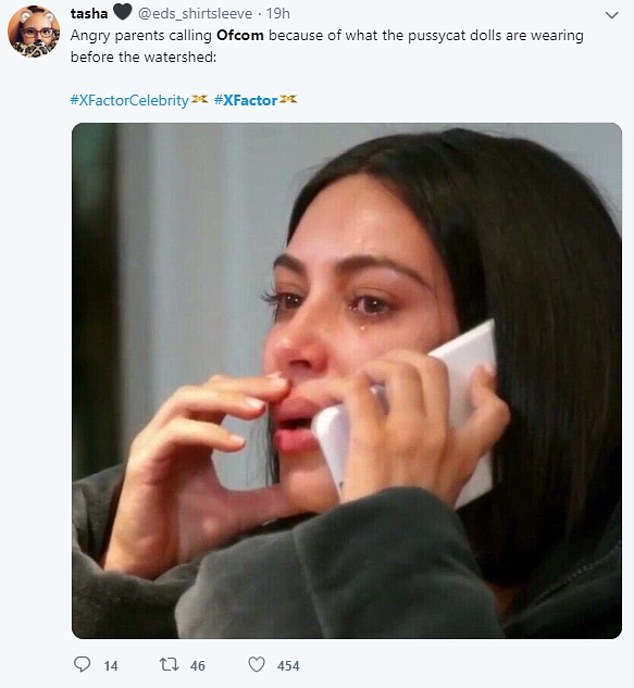 Reaction: Fans of course were swift to hit Twitter and weigh in on the matter

Another posted, alongside a picture of Kim Kardashian crying on the phone: ‘Angry parents calling Ofcom because of what the pussycat dolls are wearing before the watershed…’

‘It makes me uncomfortable to see 5 grown women dancing half naked on my screen,’ someone else tweeted.

Yet others pointed out that no one was outraged two weeks before when group Try Star took to the stage, dripping wet and half-nude.

‘These are the same parents that were c****ing themselves over tristar stripping!’ someone noted. 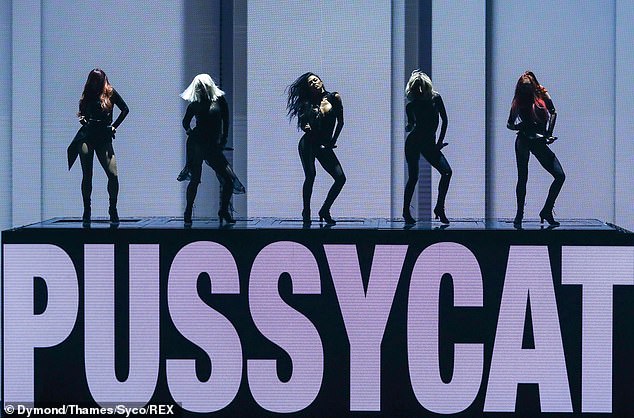 Reported: Some took to Twitter to declare they were going to the governing TV body to lodge a report 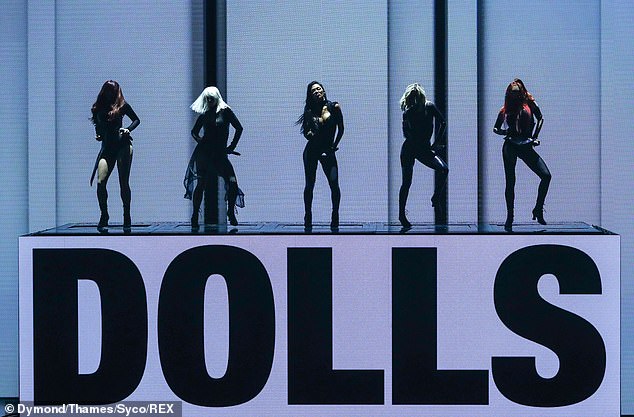 Mixed reviews: Many were simply wowed by the spectacle while others slammed the reformed girl group for apparently miming

More outrage sprung from the fact that the girls appeared to be miming – with their super-energetic routine apparently no excuse.

‘@TheXFactor @pussycatdolls pretty much Nicole ft 4 backing dancers! Not to mention miming on a singing contest, absolute cringe!’ someone tweeted.

Another posted: ‘Don’t know what was worse the miming or the dancing.’

‘Where did they leave their clothes, kinda inappropriate for a family TV show?,’ someone slammed.

‘What did I just watch?! Not sure what was worse, the outfits or the lip syncing,’ came another raging tweeter.

Hours earlier, Nicole sent fans into a frenzy as she slipped into a very racy ensemble when she took to the stage to perform with The Pussycat Dolls for the first time in a decade.

Nicole’s ensemble had black detailing to cover her modesty, while it also had a cut out panel across to show a glimpse of her cleavage.

She completed the look with a pair of PVC boots, and wore a glamorous palette of make-up for the occasion. 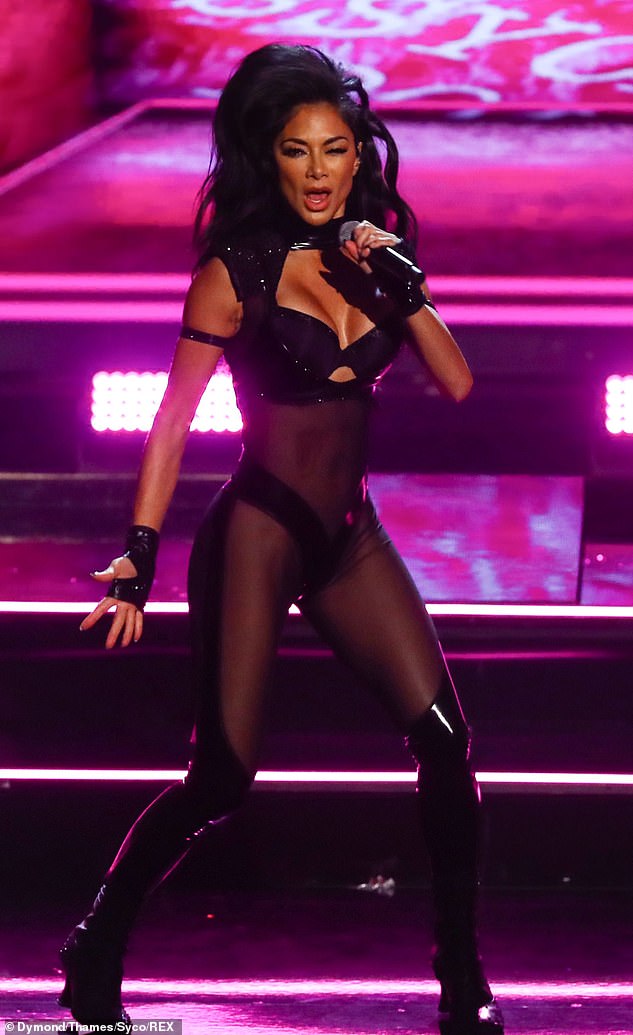 Stunning: Nicole shocked fans as she slipped into a very revealing ensemble when she took to the stage to perform with The Pussycat Dolls

Deemed ‘too sexy’ for a pre-watershed performance, the Pussycat Dolls writhed and danced on chairs, before being drenched in water for the last part of their routine.

They performed a medley of their greatest hits including Loosen Up My Buttons Baby, When I Grow Up and Dontcha for the adoring crowd.

Taking to Twitter to discuss their performance, fans discussed their shock over their outfits and how the performance wasn’t appropriate for kids.

One fan wrote: ‘I’m all about wearing what you want and embracing your body but Nicole might as well have not been wearing any clothes and there is literally kids sat down with their families watching it’s not even 9pm yet.

Sexy: Deemed ‘too sexy’ for a pre-watershed performance, the Pussycat Dolls writhed and danced on chairs, before being drenched in water for the last part of their routine 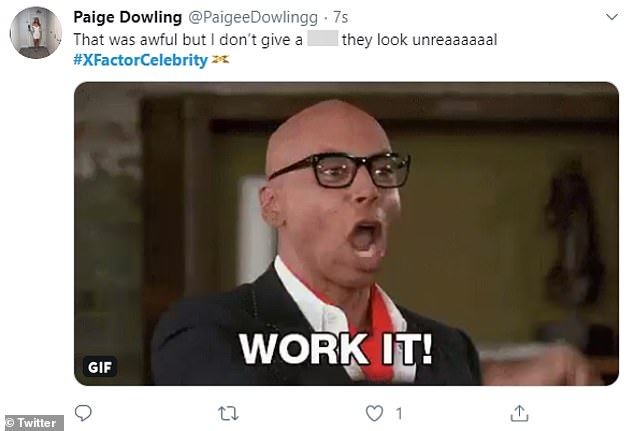 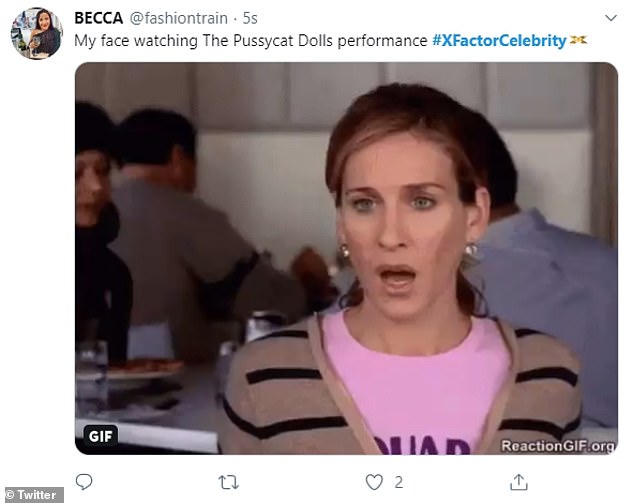 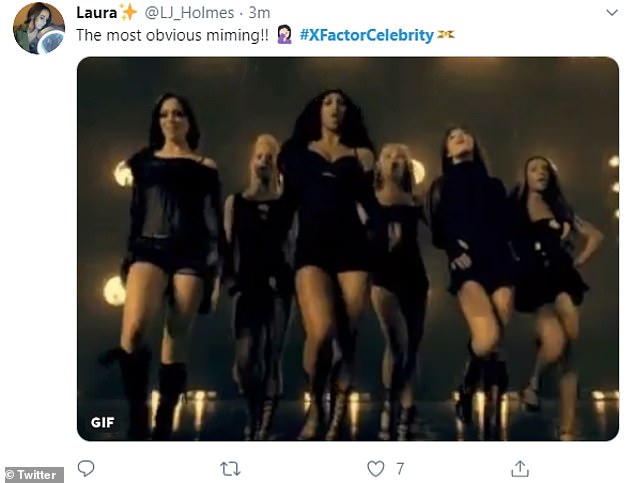 In shock: Taking to Twitter to discuss their performance, fans discussed their shock over their outfits and how the performance wasn’t appropriate for kids

Another viewer blasted: ‘What the actual f*** were the Pussycat dolls wearing! Almost saw what they had for breakfast.’

One fan was in full support of their look, though, as they wrote: ‘That was awful but I don’t give a f*** they look unreaaaaaal (sic)’ 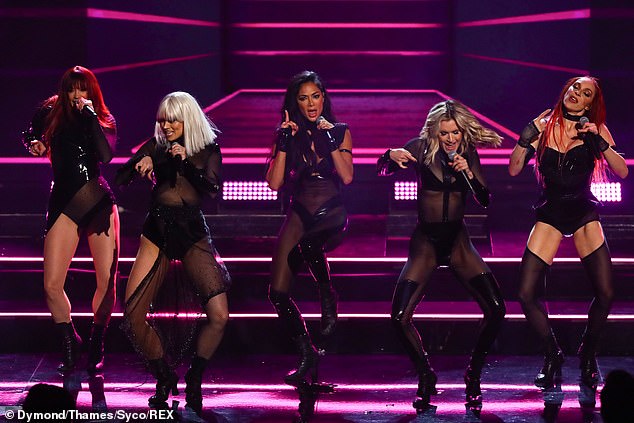 Looking good: The Pussycat Dolls give their all during their performance on the Saturday show