Her famous parents are known for keeping their family life relatively private and away from the spotlight, but little Teddy made her first public appearance at St George’s Chapel at Windsor Castle on Friday.

The six-year-old was a flower girl, along with Princess Charlotte and pageboy Prince George, for the ceremony that saw Princess Eugenie and Jack Brooksbank exchange nuptials. 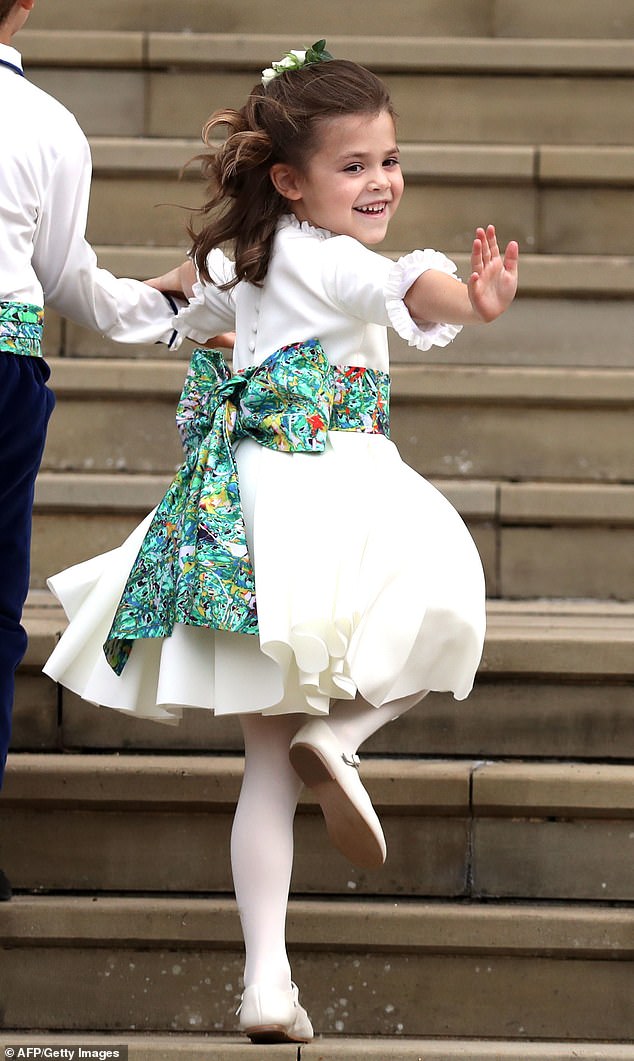 Cute as a button: Robbie Williams and Ayda Field’s daughter Theodora (Teddy) made an adorable first appearance as flower girl at Princess Eugenie’s wedding on Friday

Theodora looked as cute as a button in her flower girl getup, an ivory dress with a frilled collar and sleeves and patterned belt, as she waved to onlookers while making her way up the steps into the chapel.

The youngster was among a number of children who acted as flower girls and pageboys on the day – including Prince William and Kate Middleton’s brood, Zara and Mike Tindall’s daughter Mia and Isla and Savannah Phillips.

Clad in their wedding attire, the kids looked utterly adorable as they stopped to pose for photographs alongside Eugenie’s mother Sarah Ferguson, Princess Beatrice and Prince Andrew, the Duke of York, on leaving the ceremony. 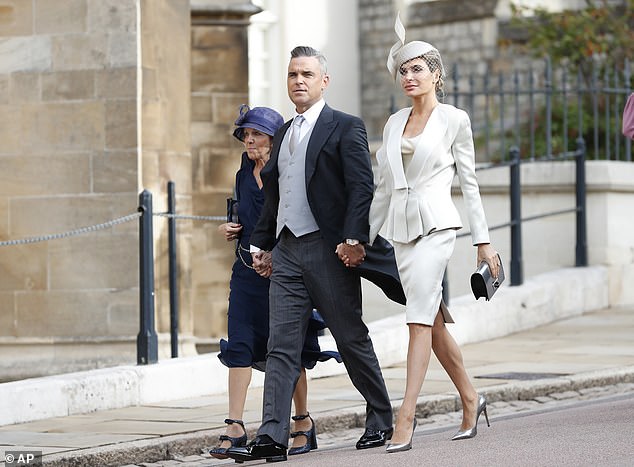 Proud parents: She was joined by her famous parents who made a glamorous duo at the elegant ceremony held at Windsor Castle’s St George’s Chapel 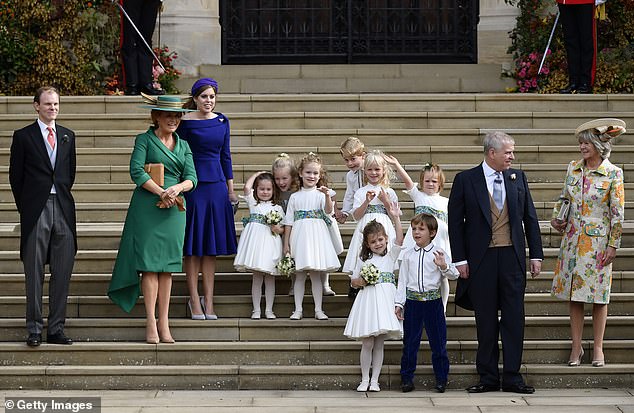 So sweet: Theodora was a flower girl alongside Princess Charlotte and Prince George, who was a pageboy – the youngsters were pictured waving off the newlyweds on the chapel steps

Robbie and his wife Ayda, who are currently starring as judges on the new series of The X Factor, were no doubt proud as punch over their little girl as she led the young wedding party.

The couple, who share three children in total – they are also parents to son Charlton Valentine, three, and their youngest daughter Colette ‘Coco’ Josephine, who they welcomed via surrogate last month – cut a glamorous duo at the wedding.

Let Me Entertain You hit-maker Robbie, 44, made a dapper appearance in a charcoal grey suit, complete with a waistcoat and tie, while Loose Women star Ayda stunned in a tailored stone two piece. 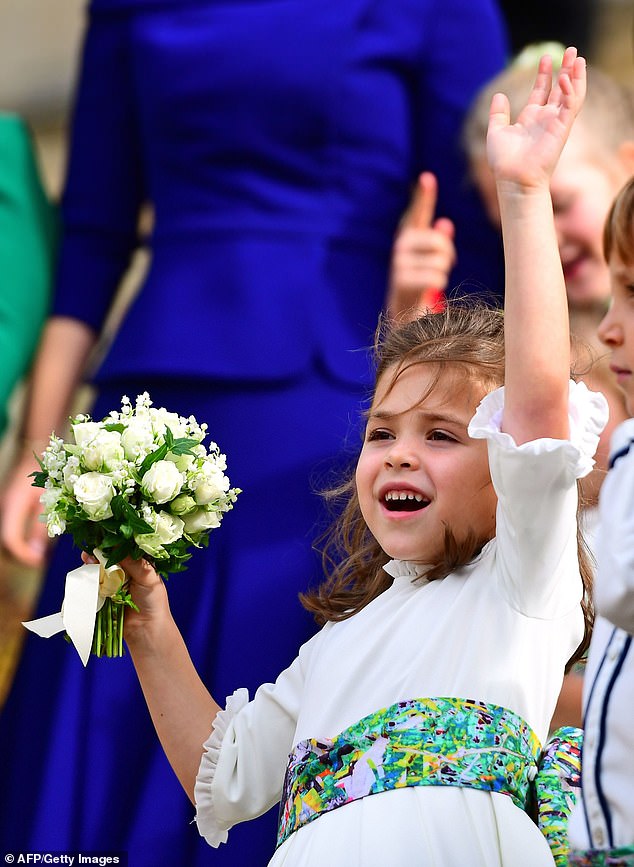 Adorable! Little Teddy couldn’t hide her delight as she waved off Princess Eugenie and her husband Jack Brooksbank 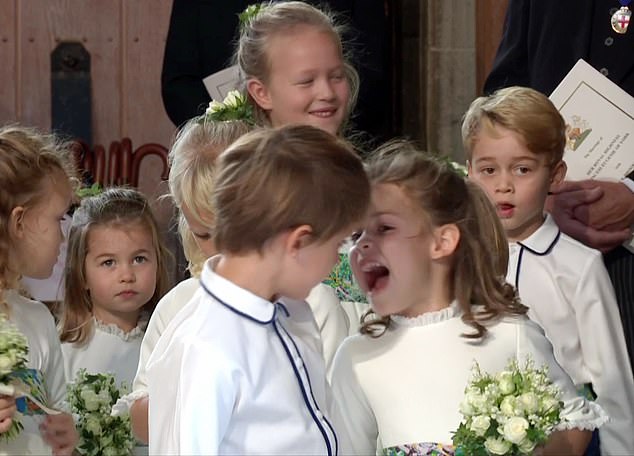 Cheeky: The young bridal party were close to stealing the show as they stood inside the chapel while the ceremony took place

The actress, 39, paired together a satin pencil dress and statement blazer jacket and teamed her getup with metallic court heels and a complementing clutch.

She sported an elegant veiled headpiece for the occasion and wore her lightened locks pinned back from her face in a chic up-do.

They weren’t the only celebrities in attendance, as guests including the likes of Ellie Goulding and her fiance Caspar Jopling, Kate Moss and her daughter Lila, 15, Naomi Campbell, Made In Chelsea’s Oliver Proudlock and fiancee Emma Louise Connelly and model Cara Delevingne all turned out for the Royal wedding. 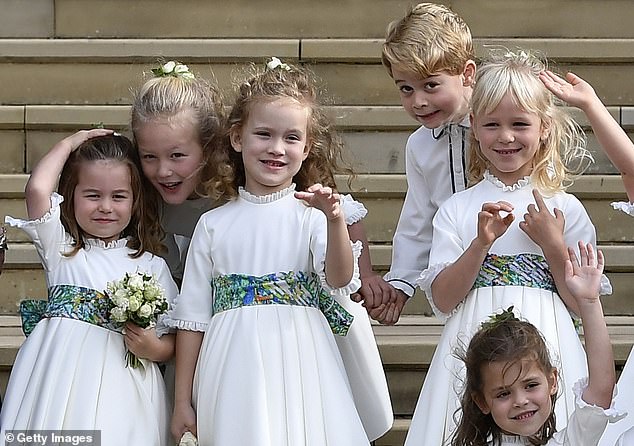 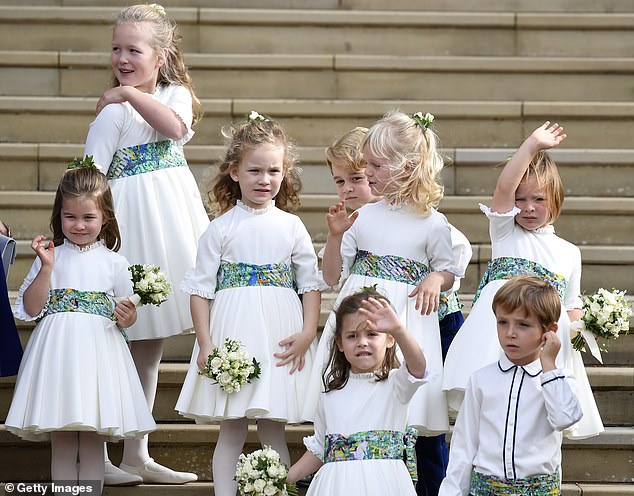 Sweet display: The youngsters were all clad in matching ensembles, with the girls sporting ivory dresses and matching patterned belts to the pageboys

Princess Eugenie wed drinks industry executive Jack in an idyllic ceremony in Windsor on Friday morning. The Queen’s granddaughter’s nuptials were held at St George’s Chapel at Windsor Castle at 11am, with most senior members of the Royal Family in attendance.

Heading out in their droves, celebrities arrived in force to see the divisive nuptials – which have left members of the public enraged due to the use of state funds.

The princess arrived with her father in the same Rolls Royce 1950 Phantom IV that was lent to the now-Duchess of Sussex on her wedding day by the Queen. 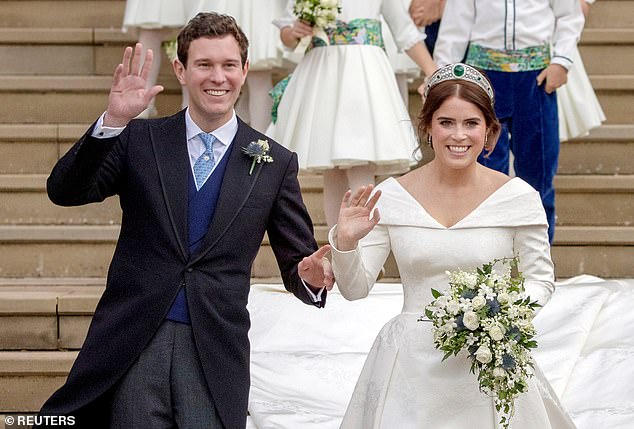 Elegant: Princess Eugenie wed drinks industry executive Jack Brooksbank in an idyllic ceremony, with most members of the Royal family in attendance 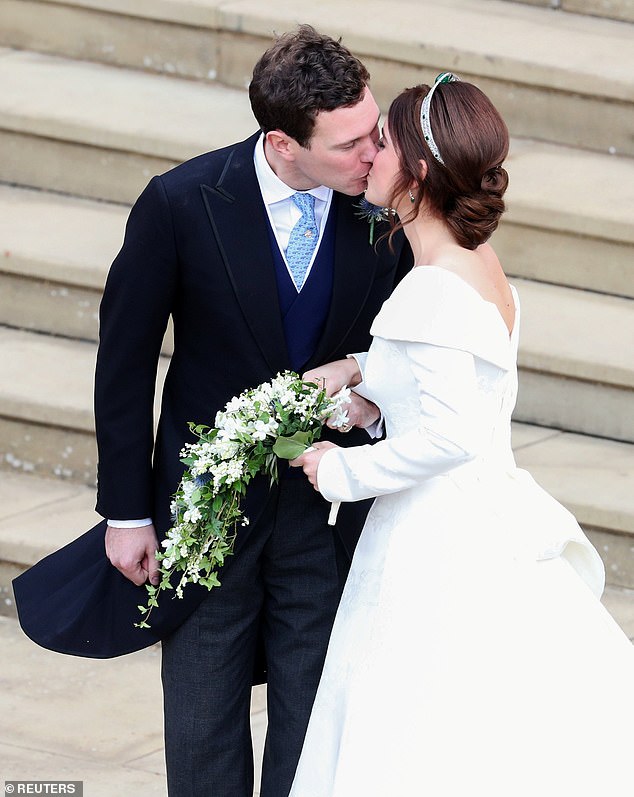 Happy days: Heading out in their droves, celebrities arrived in force to see the divisive nuptials – which have left members of the public enraged due to the use of state funds 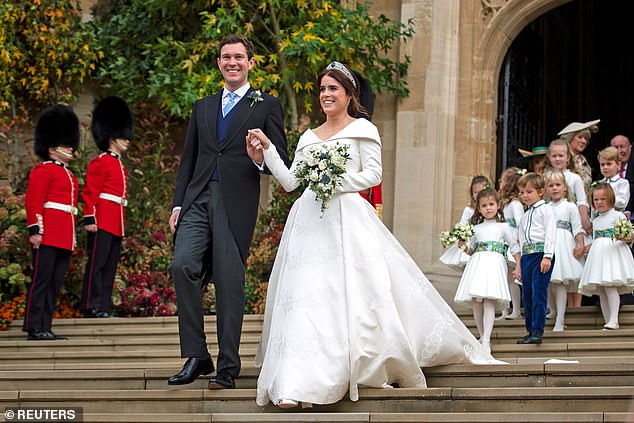 Stunning: Looking phenomenal in her Peter Pilotto off the shoulder gown with a billowing train, there was not a dry eye in the house as Princess Eugenie arrived in the church

It was made for the monarch when she was still a princess and was the first Rolls Royce that she and Prince Philip had, a sign of how special the vehicle is.

Looking phenomenal in her Peter Pilotto off the shoulder gown with a billowing train, there was not a dry eye in the house as Princess Eugenie arrived in the church.

Just hours before the wedding, Eugenie and her fiancé described the moment they first saw each other on ski holiday in Verbier, Switzerland in an interview with presenters Eamon Holmes and Ruth Langsford, who anchored live coverage of the wedding on ITV’s This Morning.

Mr Brooksbank said: ‘We were skiing in a friend’s place out in Switzerland, and [looking at Eugenie] I saw you first, didn’t I? And we just stared at each other.’ 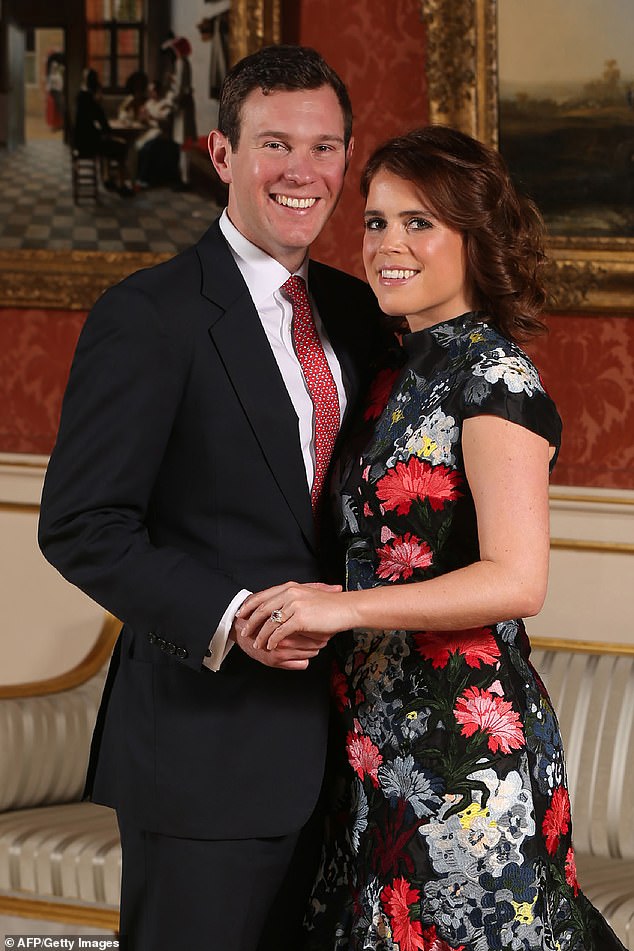 Smitten: Princess Eugenie and her now husband Jack first met on a skiing holiday in Verbier

Meanwhile, Robbie and Ayda were without their new addition Coco and their son Charlton.

The couple, who have been married for eight years, recently welcomed their third child via surrogate, surprising fans with their new addition on Instagram last month.

Ayda shared a black and white photo of herself and Robbie clutching onto the hand of their baby girl, along with their eldest two children. Alongside it she penned a heartfelt message that read: ‘I spy with my little eye an extra little hand.

‘So we have been keeping a very special secret! We are delighted to share with you that we have had a baby girl….welcome to the world Colette (Coco) Josephine Williams!! It has been a very long and difficult path to get here, which is why we have kept it on the down low. 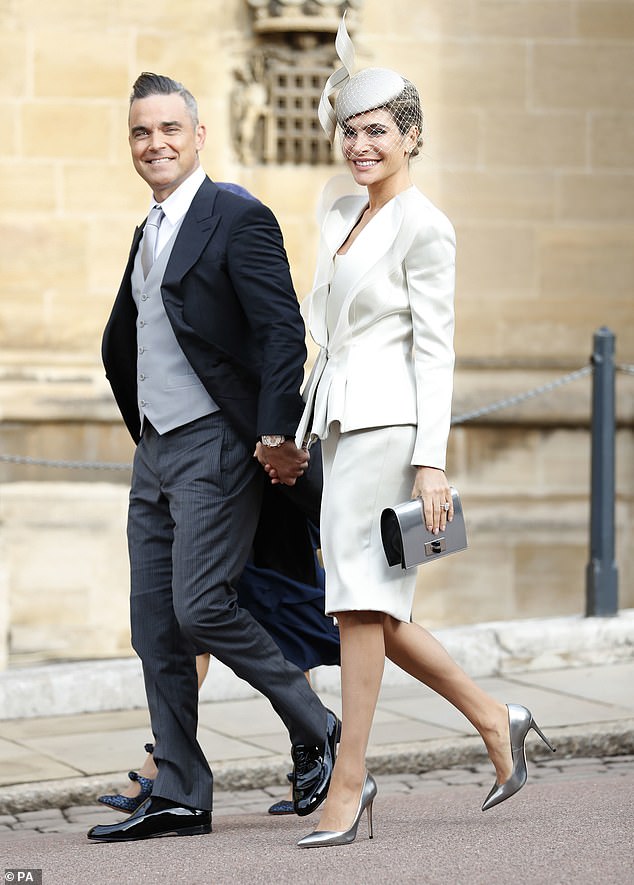 Delighted! Robbie and Ayda were without their new addition Coco and their son Charlton as they attended Princess Eugenie’s wedding 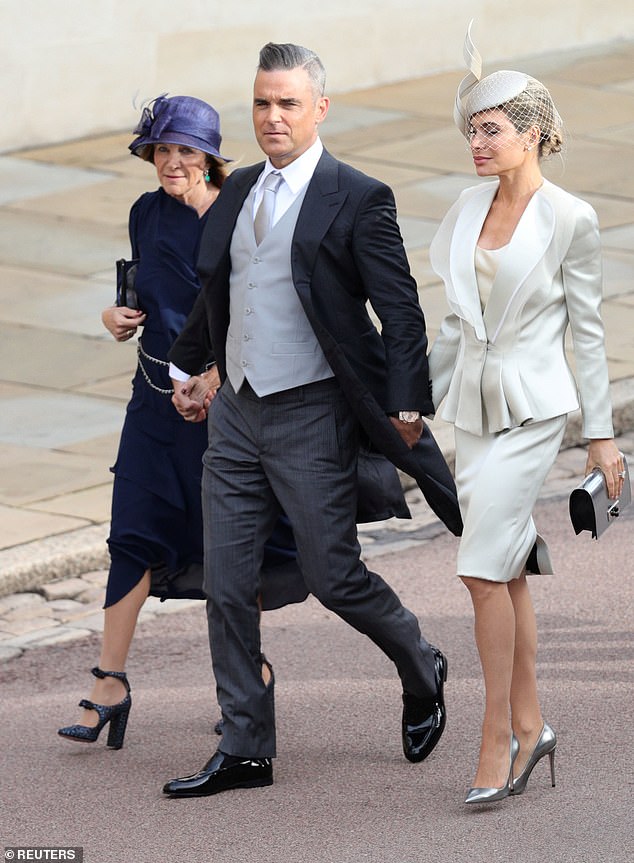 Glamorous: The couple were dressed to impress for the occasion, with Ayda favouring a stone-hued two-piece and complementing headpiece

‘Family comes in all forms, and this little lady, who is biologically ours, was carried by an incredible surrogate mother, to whom we will be eternally grateful. We are over the moon to have this beautiful baby girl in our lives and so blessed that we live in a world which makes this possible.

‘As with Teddy and Charlie, we ask that you respect Coco’s privacy and allow us to grow into our new team of 5!’

Robbie and Ayda have been dating since 2006. The former Take That star proposed to Ayda three years later, with the pair going on to marry at his Beverly Hills homein 2010. 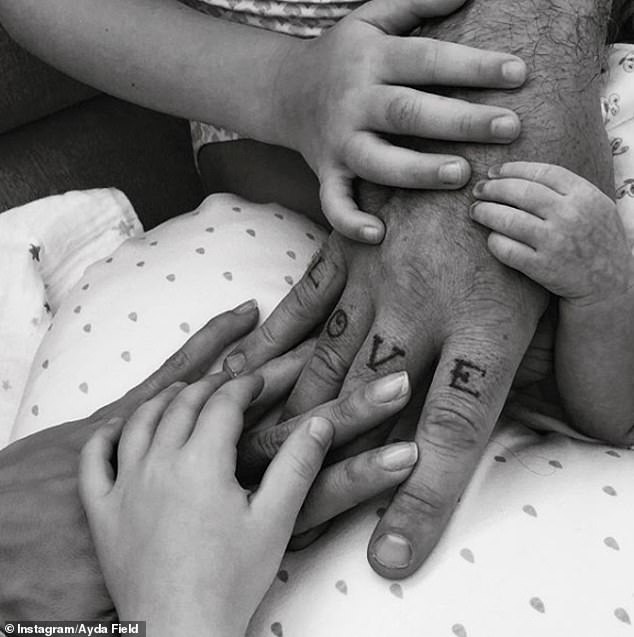