She recently received backlash for wearing a Jamaican-flag bikini with her hair in bantu knots, while he has been routinely criticized for attempting to speak Patois.

But it’s safe to assume that Adele won’t be impressed by the attention she’s just received from self-styled rapper Chet Hanks.

The son of Tom Hanks – who is known for speaking in a fake Jamaican accent – has now attempted to hit on the British singer, after she was accused of ‘cultural appropriation’ for a Sunday Instagram post to mark the cancelled Notting Hill Carnival in London. 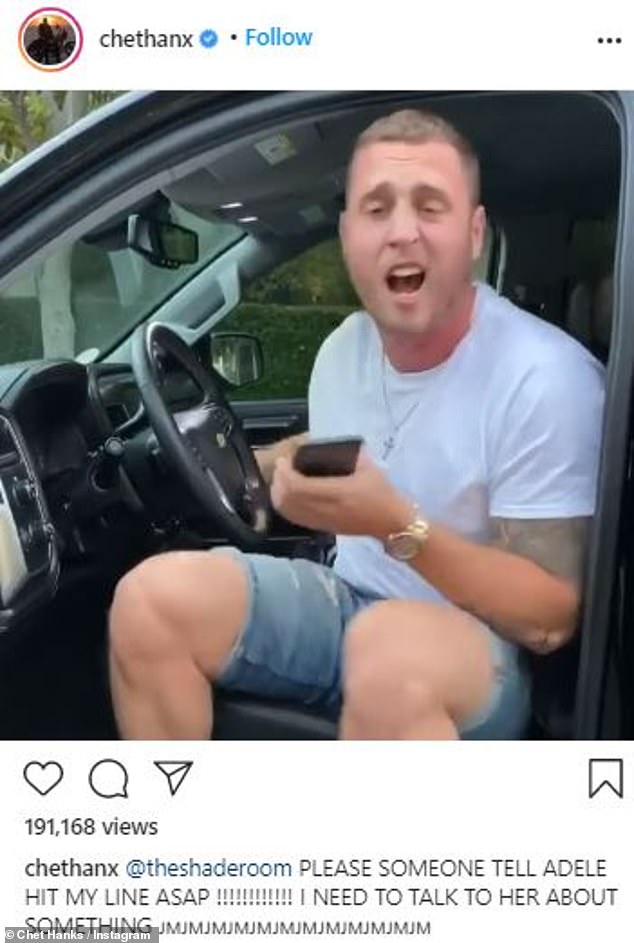 Set fire to her DMs: Tom Hanks’ wannabe rapper son Chet – known for imitating a Jamaican accent – has hit on Adele after she wore a Jamaican-flag bikini and her hair in bantu knots

While many have come to the defense of the Someone Like You singer – including supermodel Naomi Campbell and Labour MP David Lammy – Chet used the moment  to be flirtatious with the 32-year-old star.

‘PLEASE SOMEONE TELL ADELE HIT MY LINE ASAP !!!!!!!!!!!! I NEED TO TALK TO HER ABOUT SOMETHING,’ Chet, 30, wrote excitedly in all capitals, as he posted a video of himself listening to her song Set Fire to the Rain while sat in his car.

Despite facing claims of cultural appropriation himself, Chet once again impersonated a Jamaican accent at the Golden Globes this year, after a video went viral of him speaking Patois and laughing, as he said he didn’t want a ‘mawga’ girl, meaning ‘skinny.’ 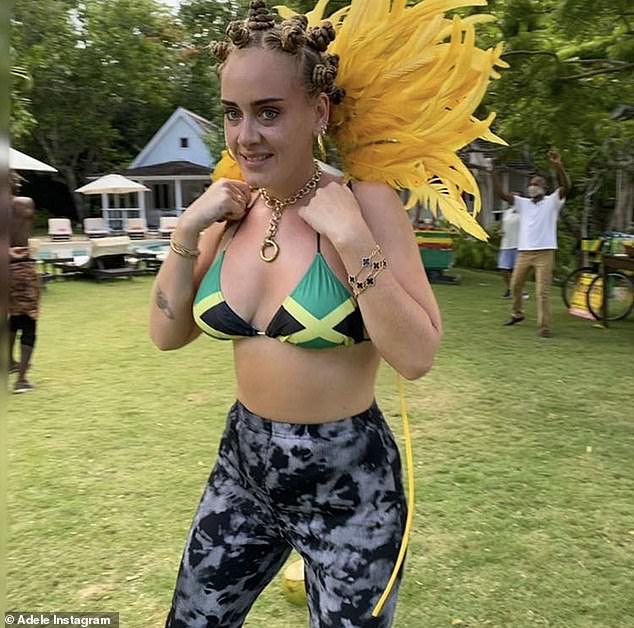 In her defense: Adele has been supported by supermodel Naomi Campbell and thousands of fans after being accused of cultural appropriation for donning a Jamaican flag bikini top to mark the cancelled Notting Hill Carnival

Meanwhile, Adele – who split with her husband Simon Konecki last year – has been romantically linked to Grime artist Skepta, 37, but is thought to be currently single.

Many have criticized the Grammy-winning songstress for her Notting Hill Carnival post, which was taken at her $9.5million Beverly Hills home on Sunday.

However, others pointed out that she grew up in Tottenham, London and has been surrounded by Black culture throughout her life.

MP David Lammy, tweeted in response to a critical article: ‘Poppycock! This humbug totally misses the spirit of Notting Hill Carnival and the tradition of “dress up” or “‘masquerade”.’ 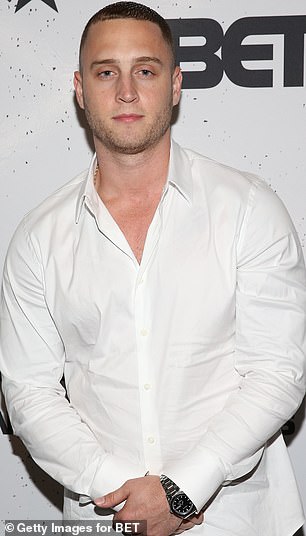 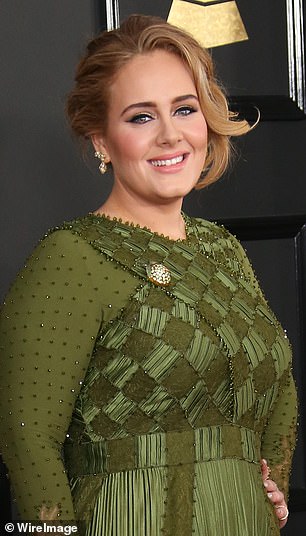 Not Someone Like You: Chet – also known by his rapper name Chet Haze – has hit on singer Adele

‘Adele was born and raised in Tottenham she gets it more than most. Thank you Adele. Forget the Haters.’

But the same cannot be said for the privileged Chet, who goes by his rapper name Chet Haze.

In 2015, Chet defended his use of the N-word on social media, saying he believes it ‘unifies the culture of hip-hop across all races.’

In an Instagram post, he said: ‘I do say the n word in real life amongst my black friends who get me and can’t nobody tell me I can’t say what the [expletive] I feel like no disrespect to the struggle of black ppl during the civil rights movement but it’s 2015 now.’ He went on to encourage followers to ‘get with the times.’

In February this year, Chet admitted that he now ‘realises’ his white privilege, following a debate about cultural appropriation online.

Cultural appropriation is a phrase to describe when members of a dominant culture use elements from a disadvantaged or minority culture for profit.

‘This has been an intense period of selfie reflection and it’s been an enlightening period for me,’ he said, but attempted to justify his Jamaican accent, adding: ‘It’s my only liberation from the constant activity of my mental. I am who I am.’