The cast of TOWIE arrived for another day of filming on Sunday, as drama continues to brew in Essex.

Yazmin Oukhellou, 26, cut a glamorous figure in a teal minidress and a plush fur faux coat, while Chloe Sims, 37, arrived with her sisters in a white knitted off-the-shoulder dress.

While Chloe has had plenty of drama after revealing her secret romance with Pete Wicks, 31, Yaz has found herself in the middle of Amber Turner and Nicole Bass’ row. 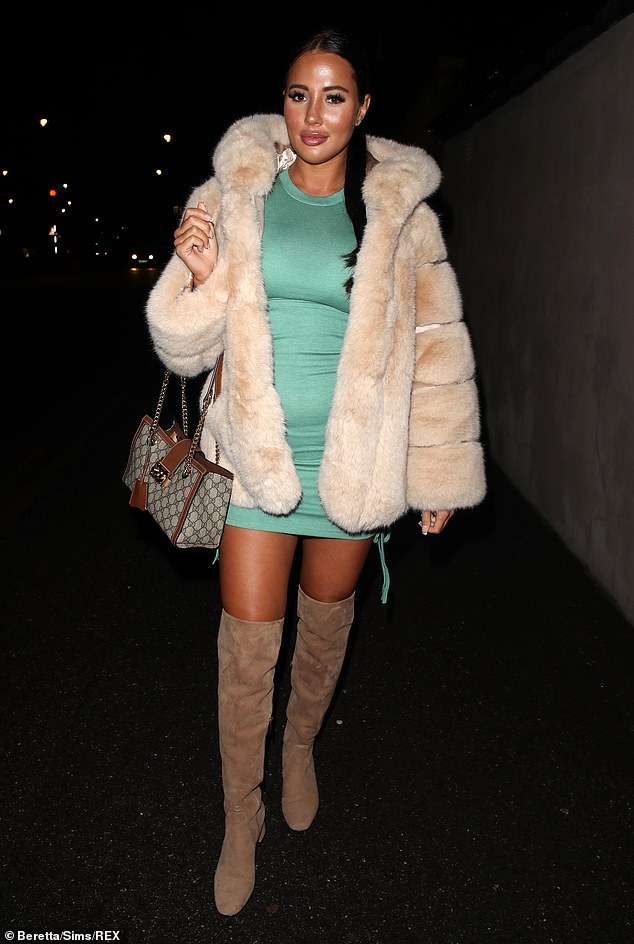 Turning heads: Yazmin Oukhellou, 26, cut a glamorous figure in a teal minidress and a plush fur faux coat as she arrived for filming TOWIE on Sunday

Yaz showed off her tanned legs in light brown thigh-high suede boots and accessorised her outfit with a Gucci handbag.

She wore her brunette locks in a low ponytail and accentuated with polished make-up look.

Strutting her stuff: Chloe Sims, 37, arrived with her sisters in a white knitted off the shoulder dress 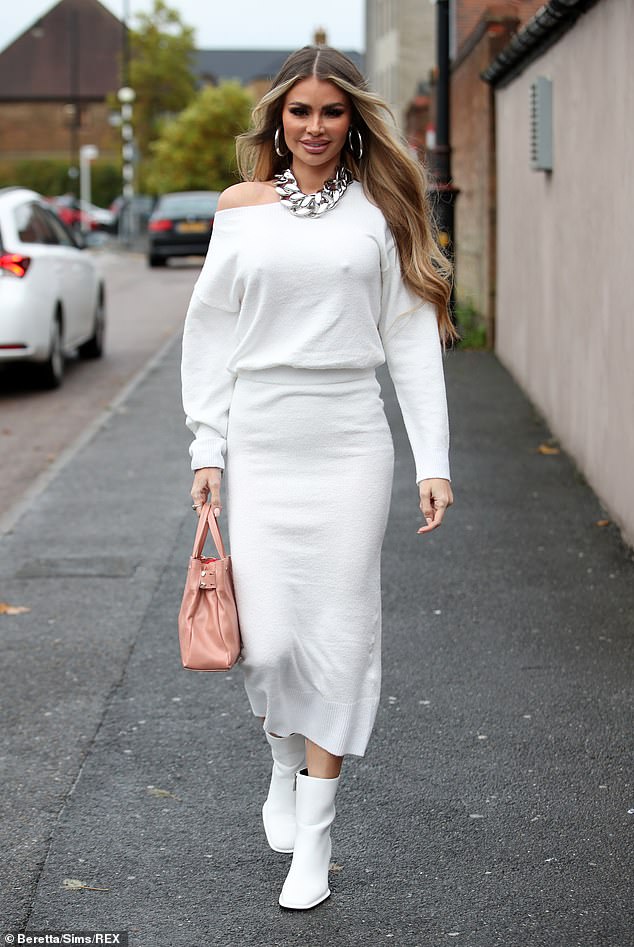 Ready for the camera: Chloe smiled as she arrived for filming

The brunette beauty oozed confidence as she strutted to filming with her sisters Demi, 23, and Frankie, 25.

Yazmin is the middle of a conflict between Amber and Nicole, who spent the past episode rowing over their tattered friendship.

Chloe and Pete had an emotional heart-to-heart in Sunday’s installment of TOWIE after not seeing each other following their explosive therapy session last week. 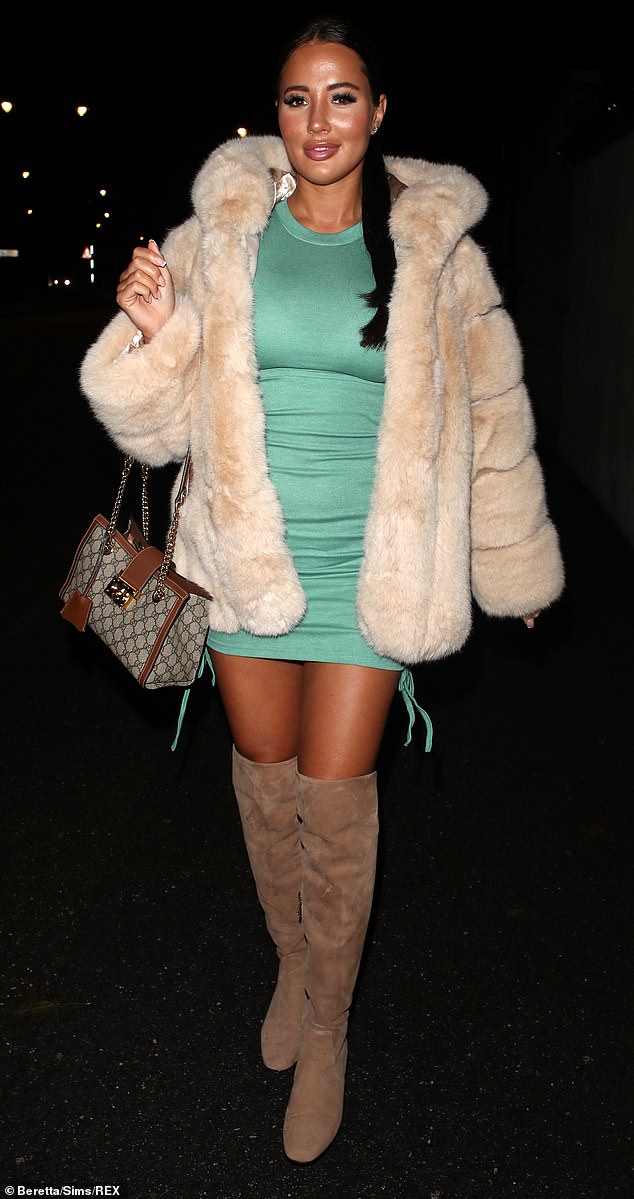 Trouble brewing: While Chloe has had plenty of drama after revealing her secret romance with Pete Wicks, 31, Yaz has found herself in the middle of Amber Turner and Nicole Bass’ row 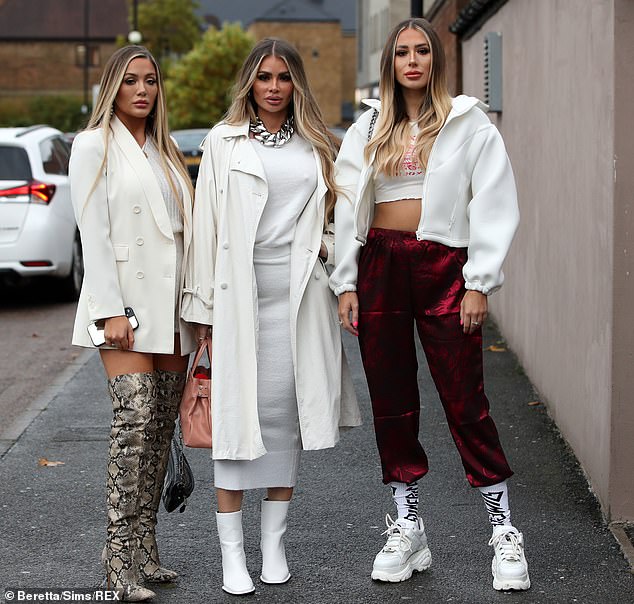 Here come the girls: The brunette beauty oozed confidence as she strutted to filming with her sisters Demi, 23, and Frankie, 25 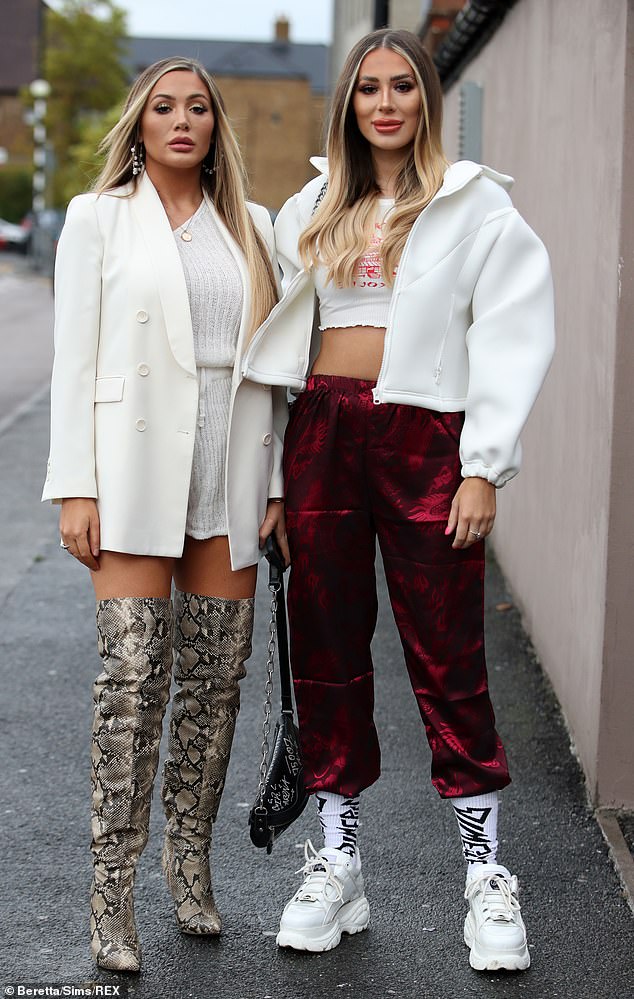 Double trouble: Frankie (L) put on a leggy display in some statement snakeskin print boots while Demi (R) flashed her abs in a white cropped T-shirt 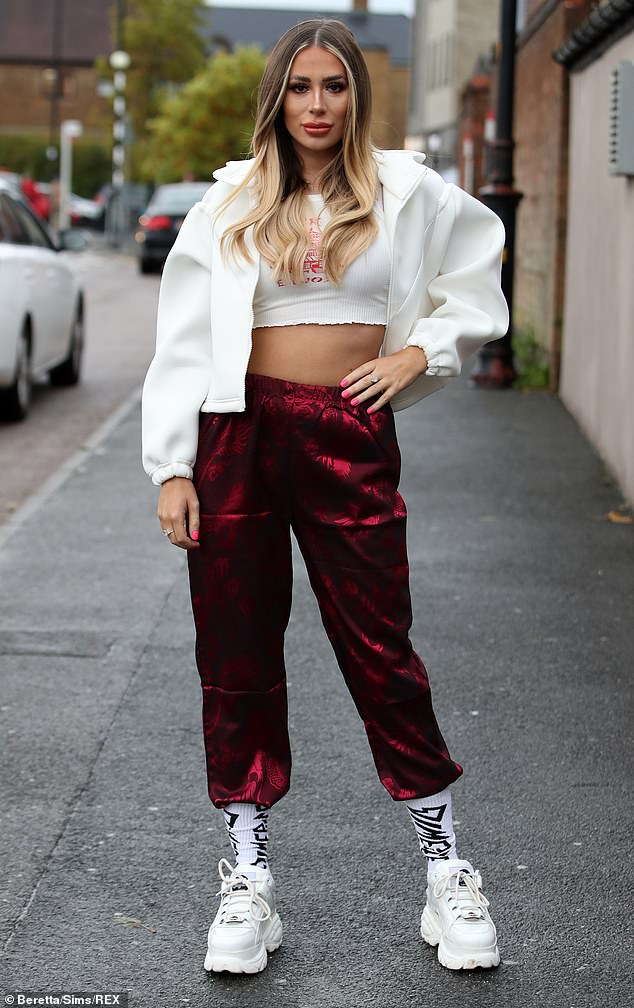 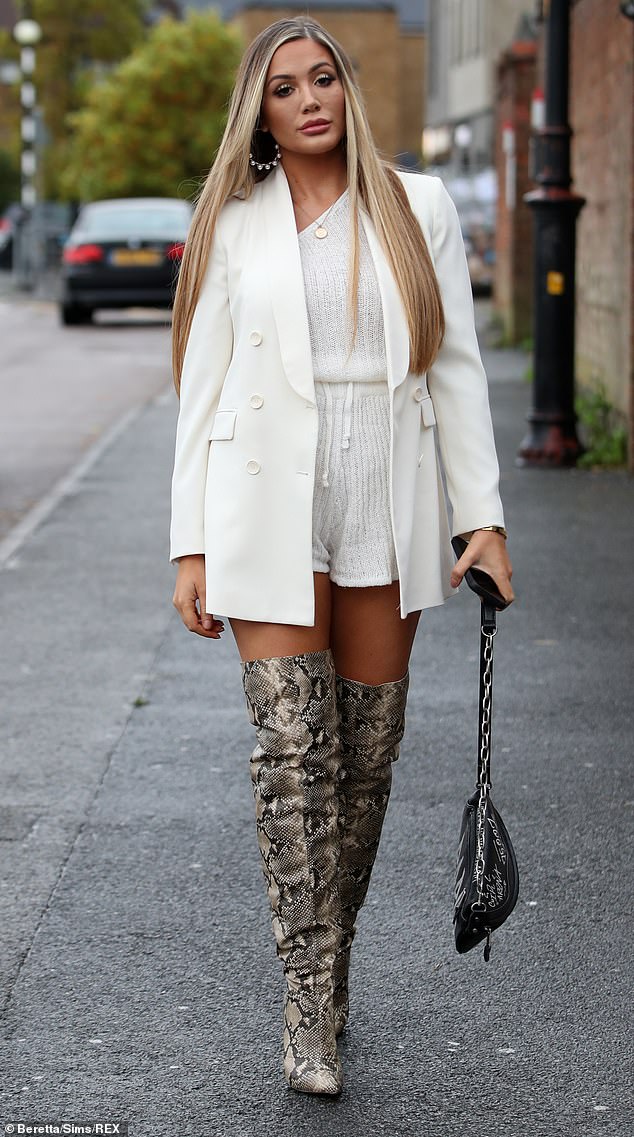 Fashion maven: Frankie took fashion inspiration from Chloe as she arrived in a white knitted co-ord and a chic white blazer

As they chatted outside the Sugar Hut during a white party, Pete made the shocking revelation that he’s taking a break from the ITVBe show, leaving Chloe  stunned.

Pete filmed Channel 4 The Circle with his good pal Sam Thompson last month, and it is thought the TOWIE scenes with Chloe were filmed just before his departure.

The pair have been at loggerheads in recent episodes after they went eight months without speaking after falling out. 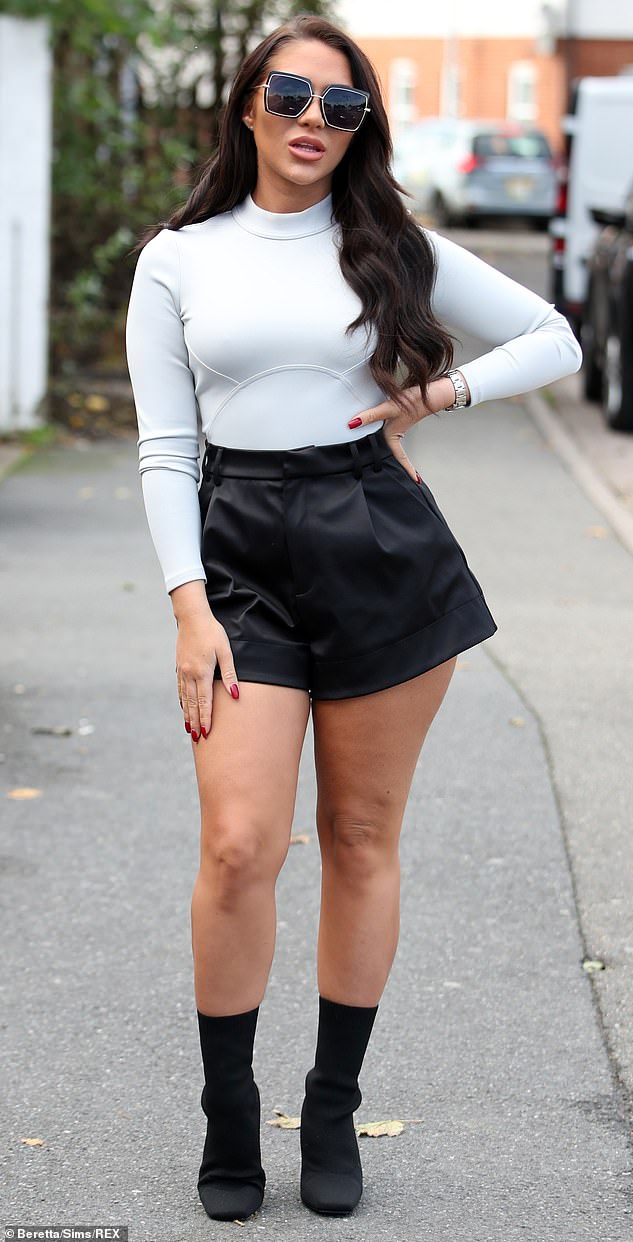 There she goes: Chloe Brockett opted for a monochrome look as she arrived for filming 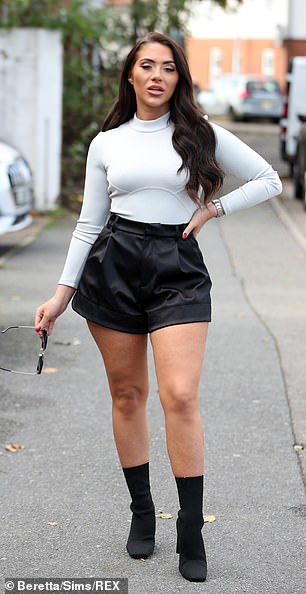 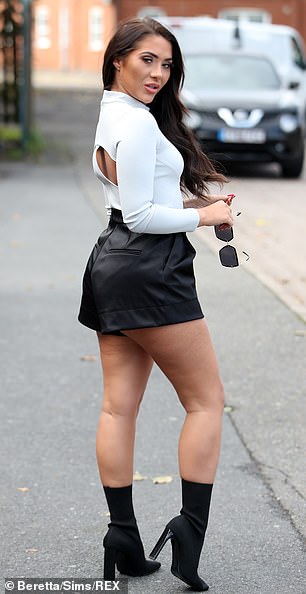 Feeling confident: The 19-year-old showed off her legs in satin shorts after saying on Instagram she was finally embracing her incredible figure 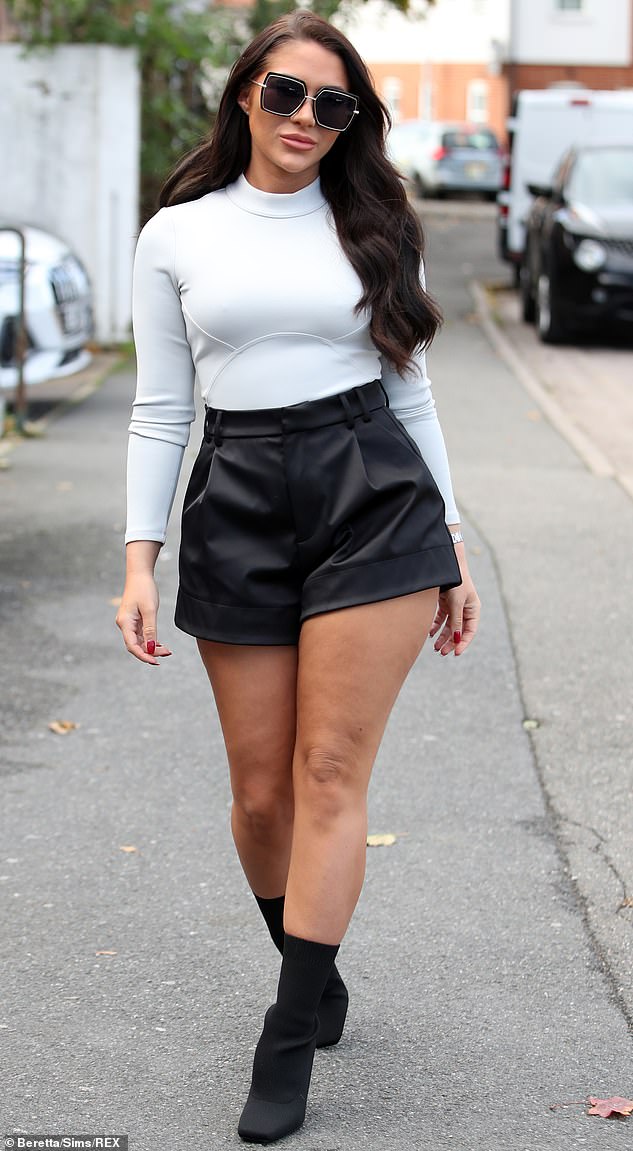 Working it: Chloe added a pair of statement shades and wore her hair in glamorous waves

Things came to a head during a couples therapy session last week to save their friendship, where is was revealed they had a two year sexual relationship.

And after therapist Anna Williamson advised they take a break, the two finally reunited at the Sugar Hut, where they discussed how they were feeling.

Pete told Chloe: ‘I wasn’t that fussed about coming tonight, but I thought I needed to come and see you. 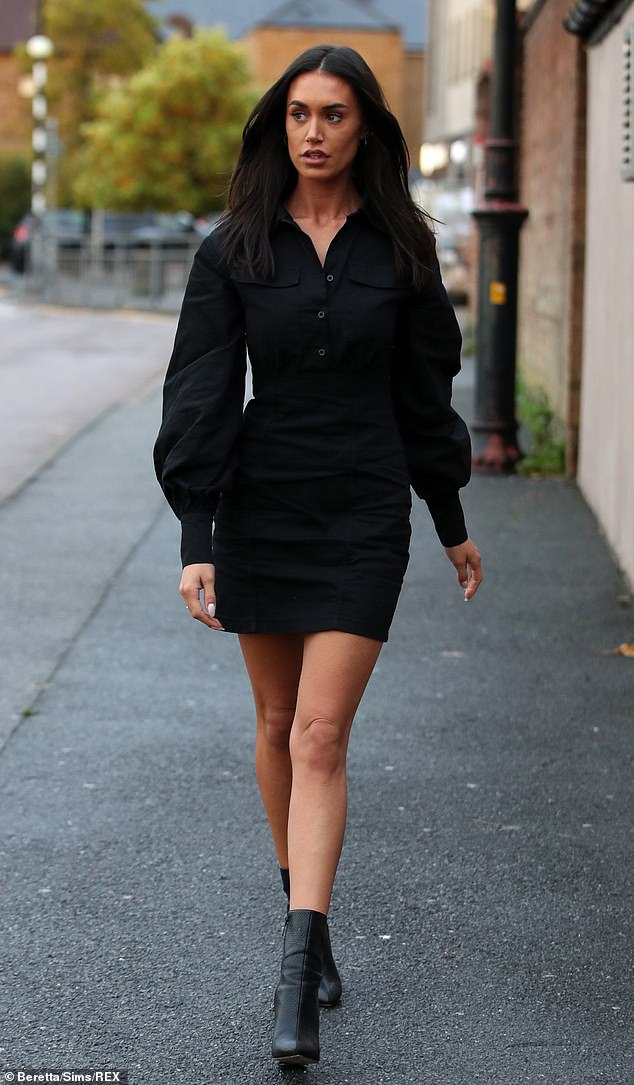 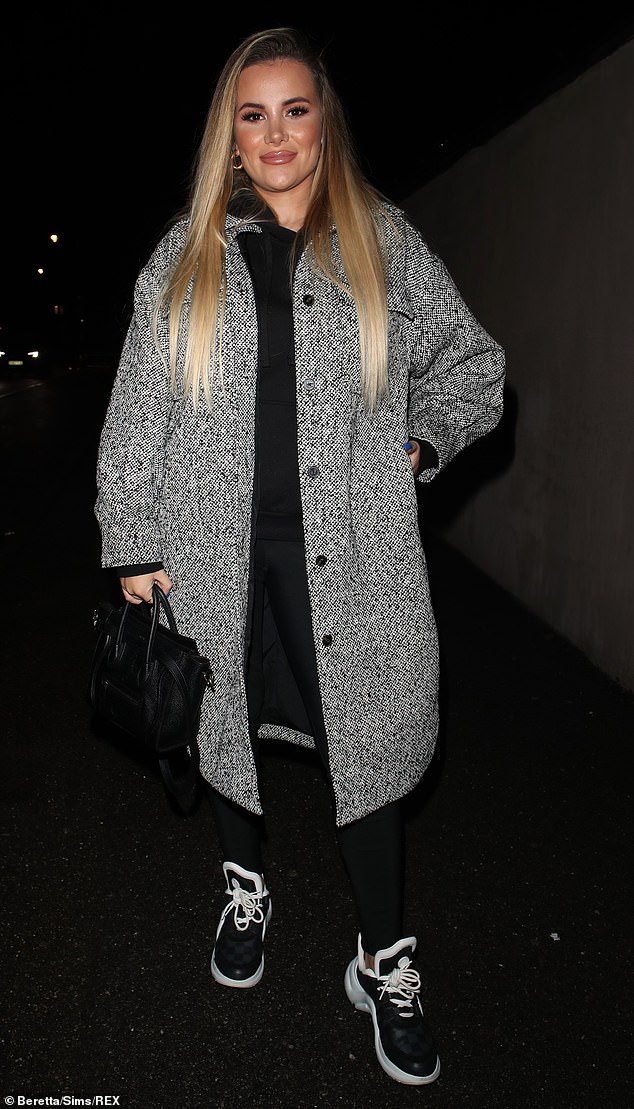 ‘I have not enjoyed this week, not seeing you, but I felt like it was the best thing for us.’

While Chloe responded that it was ‘good’ they took Anna’s advice.

As they discussed their therapy, Chloe told Pete that she couldn’t believe that he had ‘blurted’ our the secret of their sexual relationship, insisting that it had ‘always been our secret’.

She said: ‘I just can’t believe you blurted it out, I know it’s a therapy session and you’re meant to tell the truth, but it’s always been our secret. 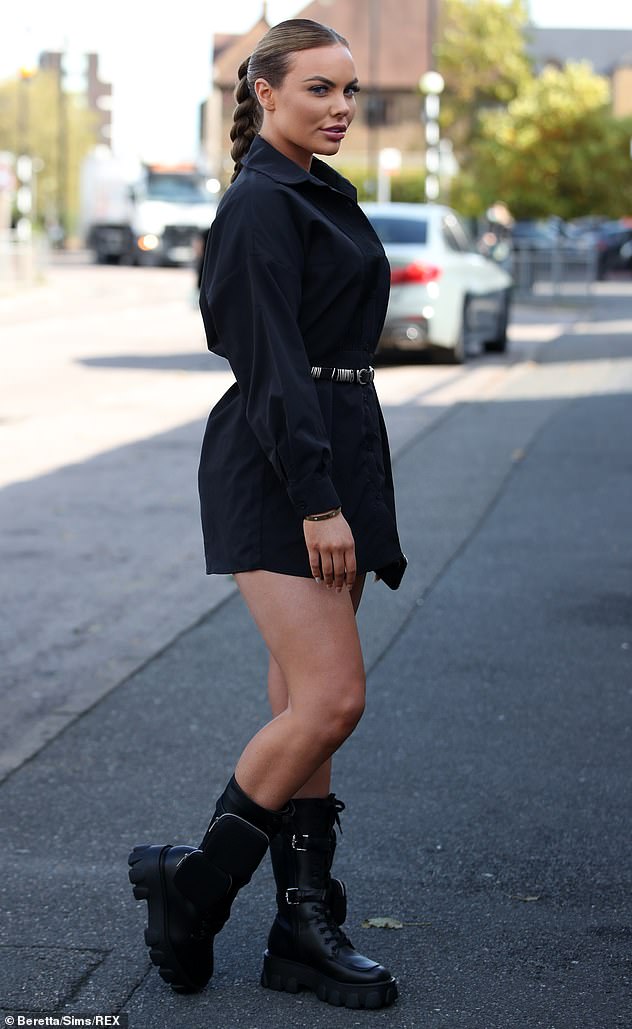 Gorgeous: Kelsey Stratford headed to filming in some chunky boots and a navy shirt dress 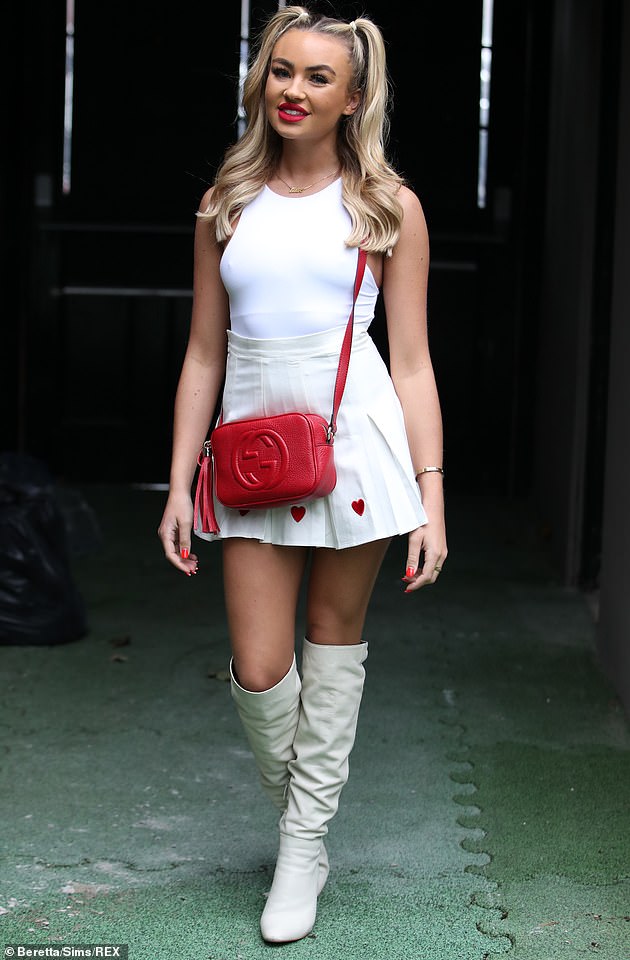 ‘I know people had their thoughts about it, but to confirm it, I was a little bit shocked.’

While Pete told her that it was good they could get it ‘out in the open’, adding that it had been a ‘weight off my shoulders’.

He continued: ‘I didn’t do it for any reason other than I think we have both carried it for the past couple of years and it’s not done us much good, it needed to be said.

‘That way me and you can work past it rather than trying to keep a secret from everyone, and everything making assumptions and not understanding how much love and emotion there is between me and you’

And as the duo looked to finally be getting things back on track, the tattooed star stunned Chloe by revealing that he would be ‘going away for a while’ for ‘work’.

As Chloe lamented being separated from him again, saying she’d be ‘vulnerable’ without him, Pete insisted: ‘I’m going away but I’m coming back.’ 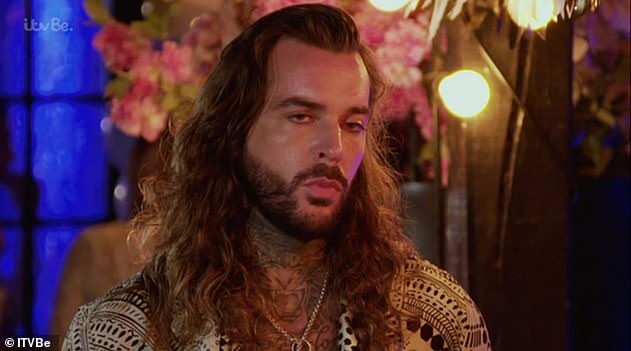 Drama: Chloe S and Pete had an emotional heart-to-heart in Sunday’s installment of TOWIE after not seeing each other following their explosive therapy session last week