LOL. Nicki Minaj left Stephen Colbert speechless after she rapped about the pair having sex during her appearance on The Late Show With Stephen Colbert.

“One of your songs ‘Barbie Dreams’ is getting a lot of attention … This one’s getting a lot of attention for some of the famous men you call out in this, and you, in no uncertain terms, describe reasons why these men would not be able to, as the kids say, ‘get with you,’” the late night host, 54, began on Monday, August 13. “But I’ve noticed I’m not on the list of men? It’s a pretty comprehensive list and I’m just curious that um, if I was to make the list, how might you inform me?”

After pausing for a brief moment, Minaj, 35, responded while making a beat on the table, “Okay, I would say, ‘I might f—k Stephen after the show, he gon’ come back to work with a magical glow,” prompting the Daily Show star to bury his head into his hands. As he took a sip of water, Colbert asked the camera, “Are we still broadcasting?”

“I wasn’t done, Stephen,” the “Chun-Li” rapper continued. “And then the ending says, ‘But when you see us, please don’t f—king stare, just address me as queen Nicki Colbert.” Colbert then bowed to Minaj before clapping his hands, proclaiming, “It’s all down hill from here.”

“Are you married?” Minaj asked as The Colbert Report alum — who uncomfortably shuffled around in his seat — answered, “What? Why … why … yes, yes I am. I am married.”

“OK, shout out to her,” the “Bang Bang” singer responded, as Colbert enthusiastically looked at the camera again and said, “Absolutely! Shout out to you, darling!” 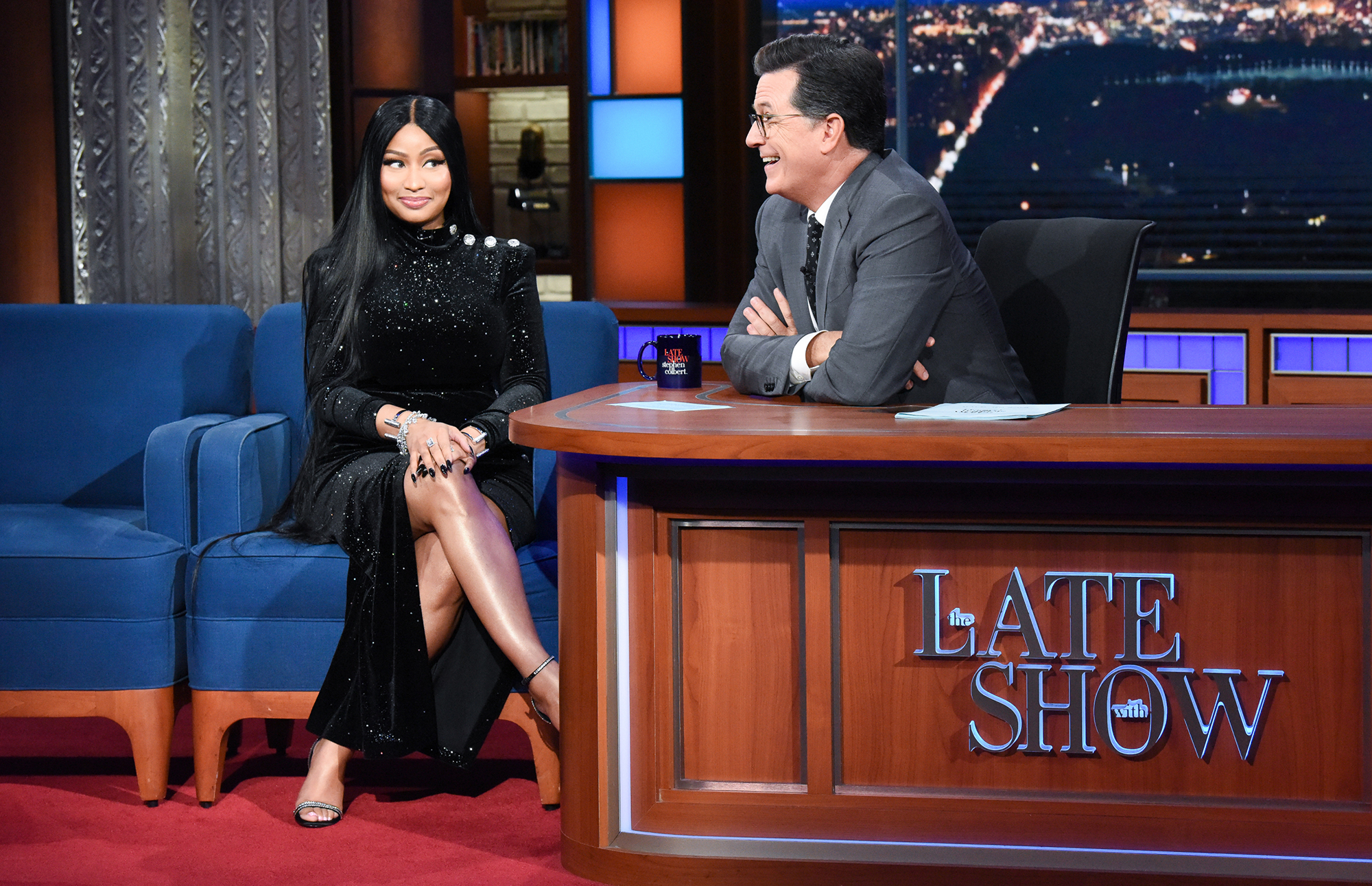 The comedian struggled to get focused, joking, “Ah, show business. No. … I don’t know where to go from here, actually. I just don’t know what to do … I just don’t want to pass this moment. I just want to linger here for so long.”

Minaj quipped, “I know, it’s so good, it’s such a good moment. It feels right.”

Minaj surprised her fans by dropping her latest album Queen a week ahead of schedule on Friday, August 10. Just minutes after it was released, “Barbie Dreams” — which takes aim at the award-winning rapper’s male counterparts — became the No. 1 trending topic on Twitter.

Minaj revealed on The Late Show that one of the men mentioned in the song reached out to her via text “kind of a mix between cursing me out and laughing at it” but she refused to divulge who, instead saying she tried to make light of the situation by texting the person crying emojis repeatedly.