Wayne Rooney reveals he’s been homeschooling his children as he shares sweet picture of himself playing a card game with son Cass, 2

Wayne Rooney revealed he’s been getting stuck in to homeschooling his four sons on Monday, amid the COVID-19 pandemic.

The footballer, 34, shared a sweet picture of himself playing an educational card game with his youngest son Cass, two, after lots of schools closed last Friday. 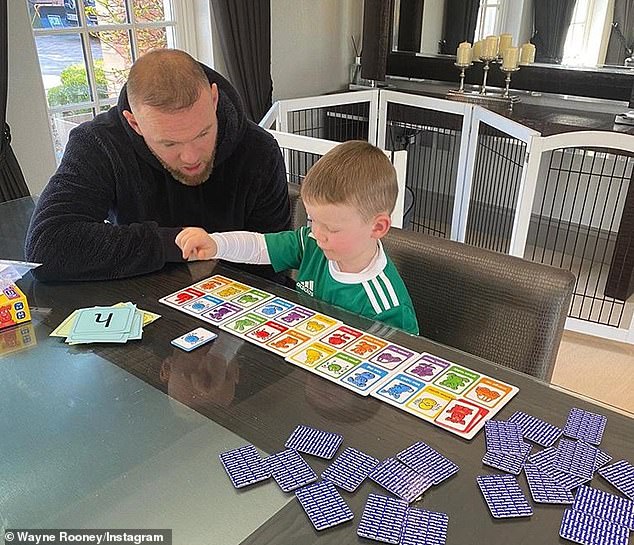 Doing his bit: Wayne Rooney revealed he’s been homeschooling his children as he shared a sweet picture of himself playing a card game with son Cass, 2 on Monday

He also shared pictures of his other sons working hard in other rooms of the house, with Kai, 10, at the computer and Klay, six, writing at the table.

The government have advised people to stay at home where possible in a bid to curb the spread of the COVID: 19 virus. 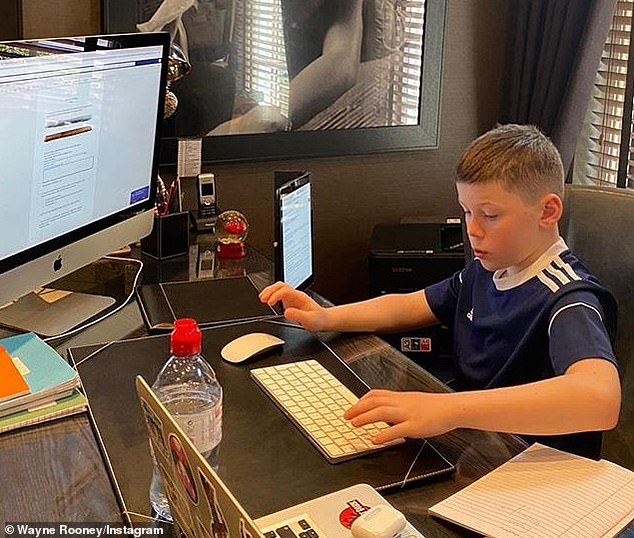 Studious: His four sons, including eldest boy Kai, ten, were pictured working in different rooms in the house 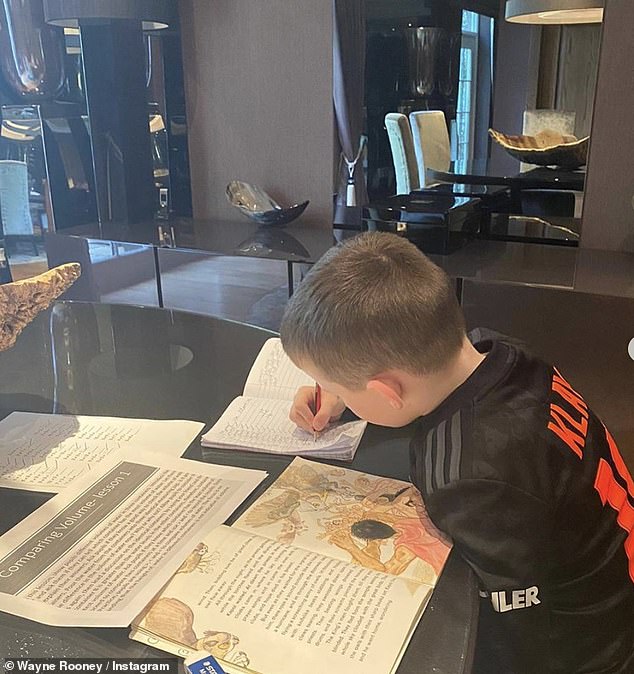 Superstar: Little Klay, six, was also seen hard at work as he wrote at the table

Coleen ensured her sons got their daily exercise in early as they took part in a live YouTube workout by celebrity fitness expert Joe.

Coleen shared a video of the boys copying the moves, with Kai, Klay, six, Kit, four, and Cass, bounding around the living room.

Cheering on her sons, Coleen could be heard shouting, ‘point your toes, Kit!’ ensuring he had the right technique.

There was no sign of Coleen’s husband Wayne, who no doubt knows a thing or two about working out, given he is widely considered to be one of the best football players of his generation. 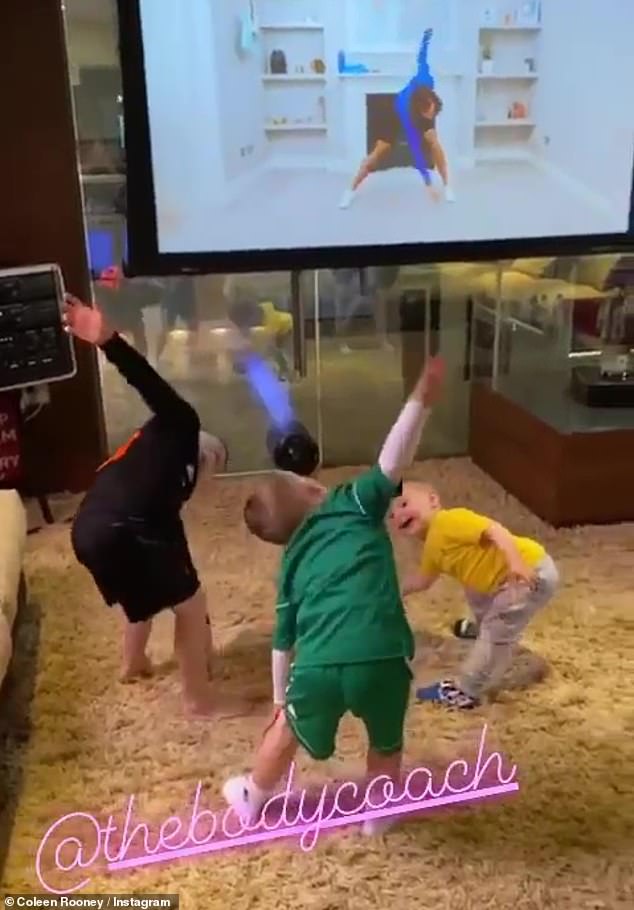 Working out: Coleen revealed how she was keeping her little ones amused as she shared a sweet video posted to Instagram earlier that day

Coleen was one of the thousands of parents encouraging their children to exercise today in the absence of PE classes.

Joe, better known as the Body Coach, broadcast an easy-to-follow 30 minute workout on his YouTube account at 9am this morning, with more than 806,000 families across the UK tuning in to exercise.

Announcing the idea on Instagram last week, Wicks said: ‘Starting from Monday, every single day from Monday to Friday, I’m going to do a live workout called “PE with Joe” on my YouTube channel The Body Coach TV. 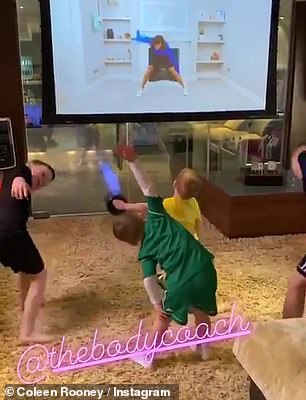 Hard at work: The mother-of-four ensured her sons got their daily exercise in early as they took part in a live YouTube workout by celebrity fitness expert Joe Wicks 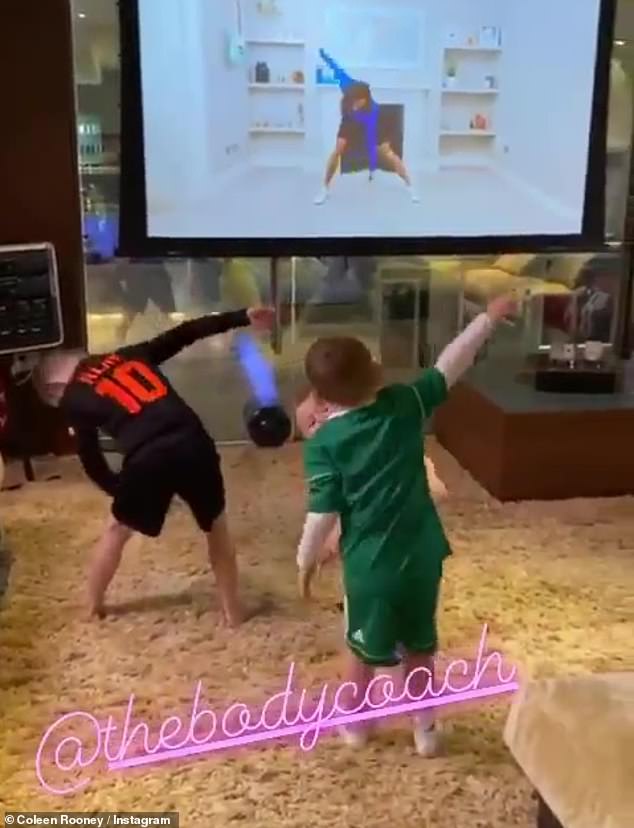 Coaching:  Cheering on her sons, Coleen could be heard shouting, ‘point your toes, Kit!’ ensuring he had the right technique

‘It’s a workout specifically designed for kids. Because when the schools closed, there is no PE. Don’t worry, I’ve got you.

‘I’m going to take this over. I’m going get your kids moving, fit and energised, positive and optimistic.

He added: ‘It’s a 30-minute session for little kids right up to secondary school, get involved, have fun. We’re going to be doing loads of basic exercises. You don’t need a lot of room.’