Younger Star Debi Mazar, 55, says ‘my lungs are heavy’ as she is diagnosed with coronavirus… and reveals ‘crazy’ battle to get tested

As the worldwide pandemic sweeps the globe, the 55-year-old actress described her excruciating symptoms, which included body aches, ear ringing, a fever and sore throat.

In addition to feeling a number of ‘intense’ ailments, she revealed her husband and two daughters also felt struck by an ‘odd bug.’

On Saturday, the actress captioned a glamorous Instagram selfie, ‘I have just tested positive for Covid-19. I AM OK!’ 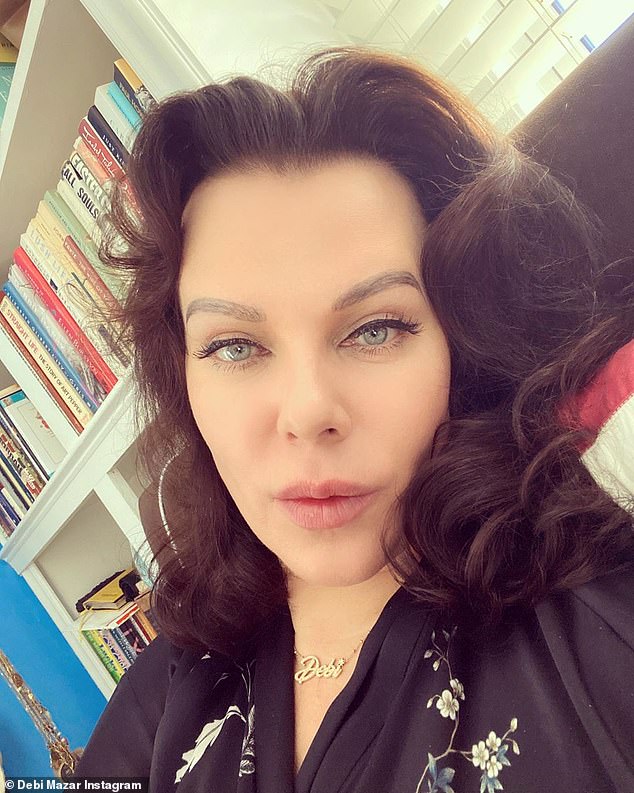 Bad news: As the worldwide pandemic sweeps the globe, the Younger Star Debi Mazar described her excruciating symptoms, which included body aches, ear ringing, a fever and sore throat in her latest Instagram on Saturday 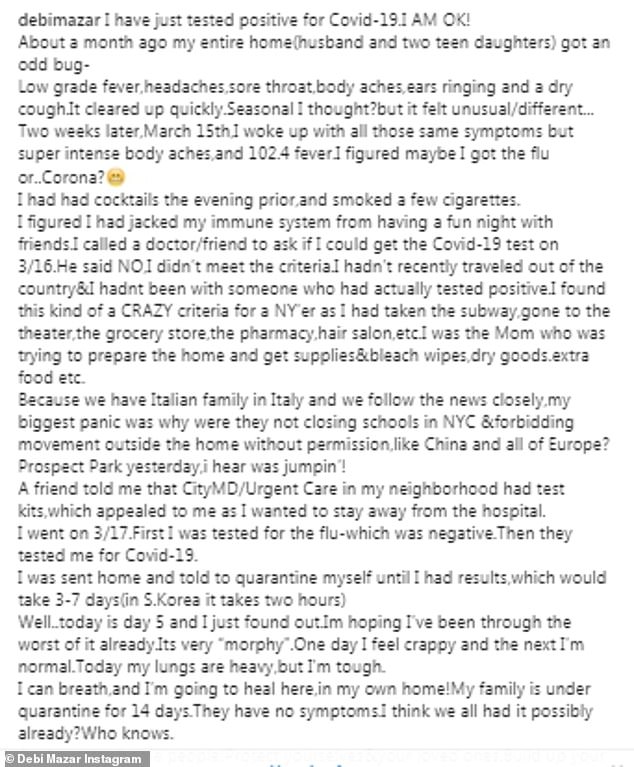 Battle for a test: Mazar said the restrictions were ‘crazy for a New Yorker’

While she first revealed that she felt ill over a month ago, her symptoms returned on March 15.

‘I woke up with all those same symptoms but super intense body aches, and 102.4 fever,’ she told her 402k followers with a picture of herself in front of a bookcase. ‘I figured maybe I got the flu or…Corona?

Despite attempting to get tested over a week ago, Mazar was told she didn’t meet the criteria because she hadn’t traveled out of the country or ‘been with someone who had actually tested positive.’

‘I found this kind of a CRAZY criteria for a NY’er,’ she wrote, detailing how she was exposed to thousands of people all over the world from trips to the grocery store, pharmacy, hair salon and on the subway.

After testing negative for the flu on Tuesday, Mazar was finally screened for Covid-19. 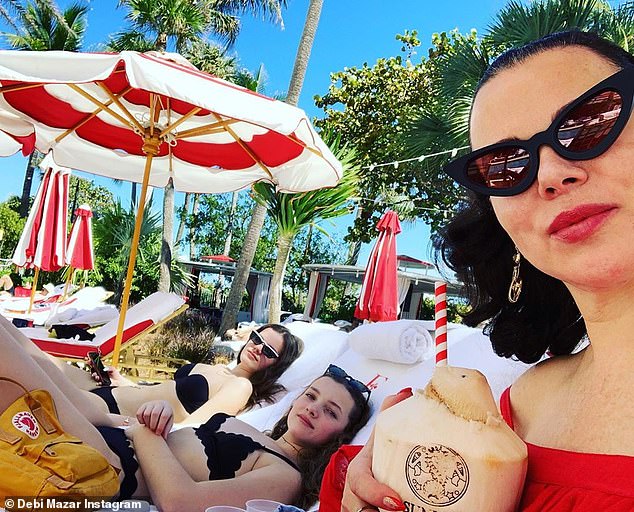 ‘I have just tested positive for Covid-19. I AM OK!’ she told her 402k followers, in addition to revealing her two daughters and husband are, now, being quarantined; family seen in file shot

‘I was sent home and told to quarantine myself until I had results, which would take 3-7 days,’ she noted, before pointing out in South Korea it only takes two hours to learn test results for the virus.

After five days, she learned of her positive diagnosis and says she has been fluctuating between feeling ‘normal’ and ‘crappy.’

Today my lungs are heavy, but I’m tough. I can breath,’ she said in the heart wrenching update. ‘My family is under quarantine for 14 days. They have no symptoms.’

While her children and husband are not exhibiting signs of coronavirus, she believes they’ve all had it at one point.

To conclude the post, she encouraged her followers to stay home, protect themselves and build up their immune systems.

With 200,000 cases of the virus worldwide, the outbreak has caused delays and cancellations across the entertainment industry, as people are encouraged to self-isolate.

‘The Sky is Falling’: NYC surgeon on the front lines warns ‘life will forever look different’

‘The sky is falling. I’m not afraid to say it,’ wrote Cornelia Griggs in an open letter to the New York Times. The opinion piece published this morning paints a grim picture for medical personnel that are fighting tirelessly to combat Covid-19.

‘Alarmist is not a word anyone has ever used to describe me before,’ said the New York City pediatric surgeon. ‘But this is different.’

Griggs, who trained in emergency room traumas and did rounds in intensive care units at Harvard hospitals, said: ‘Panic is not in my vocabulary; the emotion has been drilled out of me in nine years of training.’ 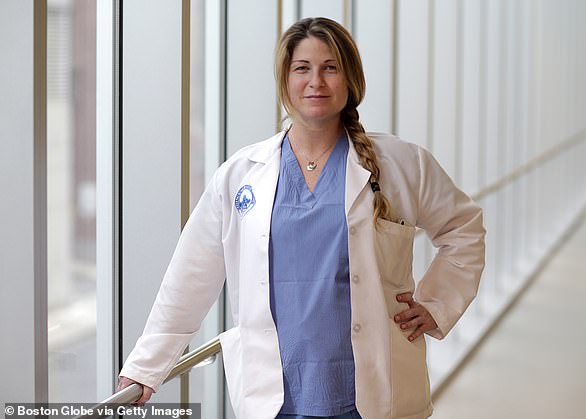 Cornelia Griggs, a board certified surgeon in working in New York City’s largest hospital pens  a warning letter in the New York Times about the bleak reality of the Coronavirus pandemic, she said: ‘We are living in a global public health crisis moving at a speed and scale never witnessed by living generations’

Her open letter to the New York Times reveals the sheer terror and uncertainty medical experts face in the fight to contain Coronavirus which has 2,469 confirmed cases in New York City alone (a dramatic increase from 1,339 cases yesterday).

It was only two weeks ago that Griggs’ children were having pizza parties and running though the hallways carefree with other resident children in her apartment complex.

Griggs wrote about a difficult conversation she shared with her neighbor Karen: ‘Look me in the eye,’ she recalled with a lump in her throat: ‘I make this personal promise to you – I will not let your children die from this disease.’

Statistically, Griggs said that she feels confident in her vow to Karen being that ‘children do not seem to be dying from Covid-19.’ It was a brief moment of levity in her open letter that acknowledges the bleak, deadly reality that has already claimed over  9,300 lives worldwide. She added: ‘There are others to whom I cannot make similar promises.’

‘We are living in a global public health crisis moving at a speed and scale never witnessed by living generations,’ she wrote in the New York Times piece.

Working from one of New York City’s largest hospitals trying to contain the rapidly spreading virus, Griggs said that there has been ‘movement to redeploy as many health care workers as possible to the E.R.s, new ‘fever clinics’ and I.C.U.s.’

She added that it’s become ‘an all-healthy-hands-on-deck scenario.’

‘The sky is falling,’ wrote Griggs. ‘A few weeks from now you may call me an alarmist; and I can live with that. Actually, I will keel over with happiness if I’m proven wrong.’ 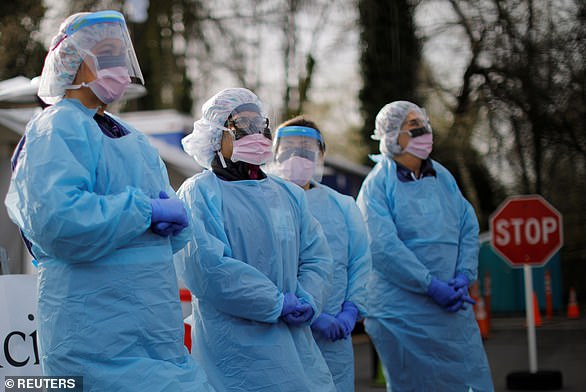 Griggs, (who works at one of New York City’s largest hospitals) wrote that supplies and personal protective equipment are ‘dwindling’ and doctors are ‘pessimistic’ about their ability to control a ‘surge’ in cases with only 4,000 beds and 750 ventilators

Though Griggs maintains that the current reality is indeed terrifying. She explains that doctors still do not have straightforward access to testing across the country. On top of that, the guidelines and criteria for testing are constantly in flux.

Supplies and personal protective equipment are ‘dwindling.’ Anti-viral treatments are still in the nascent stages of experimentation. The city is playing a numbers game with the amount of available hospital beds, ventilators and medical staff that are absorbing the surge in Coronavirus cases. ‘We are living in a global public health crisis moving at a speed and scale never witnessed by living generations.’

‘Let me repeat. The sky is falling,’ she says again. ‘The cracks in our medical and financial systems are being splayed open like a gashing wound.’

Did Mandalorian Cop Out With Ahsoka? Did Filthy Rich Heat Up Too Late? What Did The Undoing Undo? And More Qs!