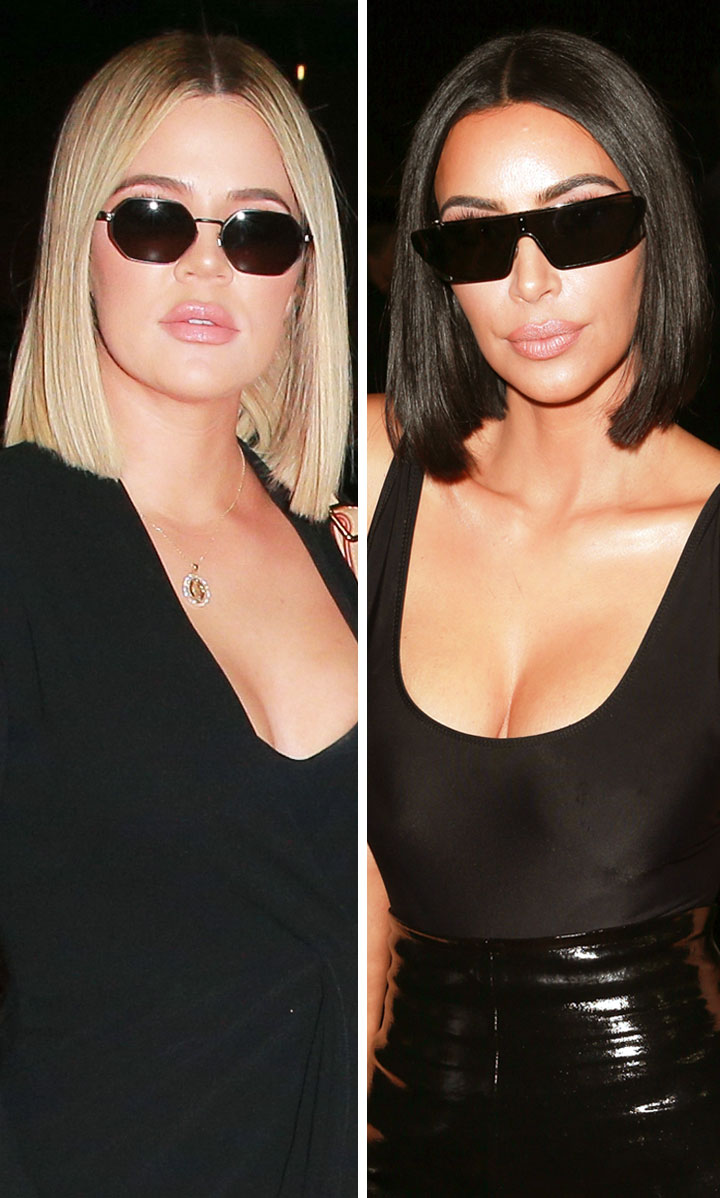 We can now call it: we had our suspicions, but the sisters Kardashian have confirmed that the haircut of the summer is the blunt bob. In the space of less than a week, both Khloe and Kim debuted freshly shorn short ‘dos. Kim showed off her new look on Sunday, July 29, while Khloe’s was first introduced to the world on July 26.

Nearly everyone in the family has flirted with cropped tresses, with supermodel Kendall taking the plunge first a few years ago. And this isn’t the first time these specific sisters have gone short — Khloe and Kim have both chopped off their locks in the past. And now, the sisters Kardashian-Jenner are back on board.

First, Khloe debuted her newly shorn blonde strands courtesy of Justine Marjan — further proof that she’s back after baby, whether she’s her rockin’ bod or just her killer haircut.

But not to be outdone, older sister and beauty magnate Kim also got on board the short hair train, taking KoKo’s lead, returning to her bob with a twist: it was shorter than ever. Kim is the queen of the hair transformation, oscillating between wavy mermaid hair, sleek ‘60s-style genie ponytails and slicked back platinum blonde hair and, yes, bobs and lobs.  Yet, amazingly, every time that she returns to the ‘do, she wears it differently — and her latest look is no exception to the rule.

Wigging Out! Stars Are Mixing Up Their Hair Looks With Wigs

The OG reality TV star stepped out for date night on Saturday, July 28, with hubby Kanye West rocking her glossy raven hair ‘90s supermodel style, meaning above the shoulder and below the chin (her shortest ever) but she freshened the look by wearing it curled under. This of course, references younger sister Kendall’s penchant for rocking her signature bob curved in in a retro-fabulous style. Even if they’re all wearing the same hairstyle, those Kardashian-Jenners always find a way to make a look their own.

Short hair has been having more than a moment and while mile-long extensions can still be spotted from time-to-time in Hollywood, it seems as though the majority of the fashion set are leaning shorter these days with everyone from Olivia Wilde to Jenna Dewan sporting the style. And the blunt ends that the Kardashians are wearing gives the look a cool edge that reads modern and fierce.

But Kim, Khloe and Kendall aren’t the only members of the family who are bob fans. Kylie has also worn her hair in the cropped look this summer showing off her ‘do while famously announcing that she had her fillers dissolved a few weeks ago. So that just leaves Kourtney and the bob will have blessed every sister in the family. But since we now know this is *the* Kardashian-Jenner way to go right now, it could just be a matter of time.